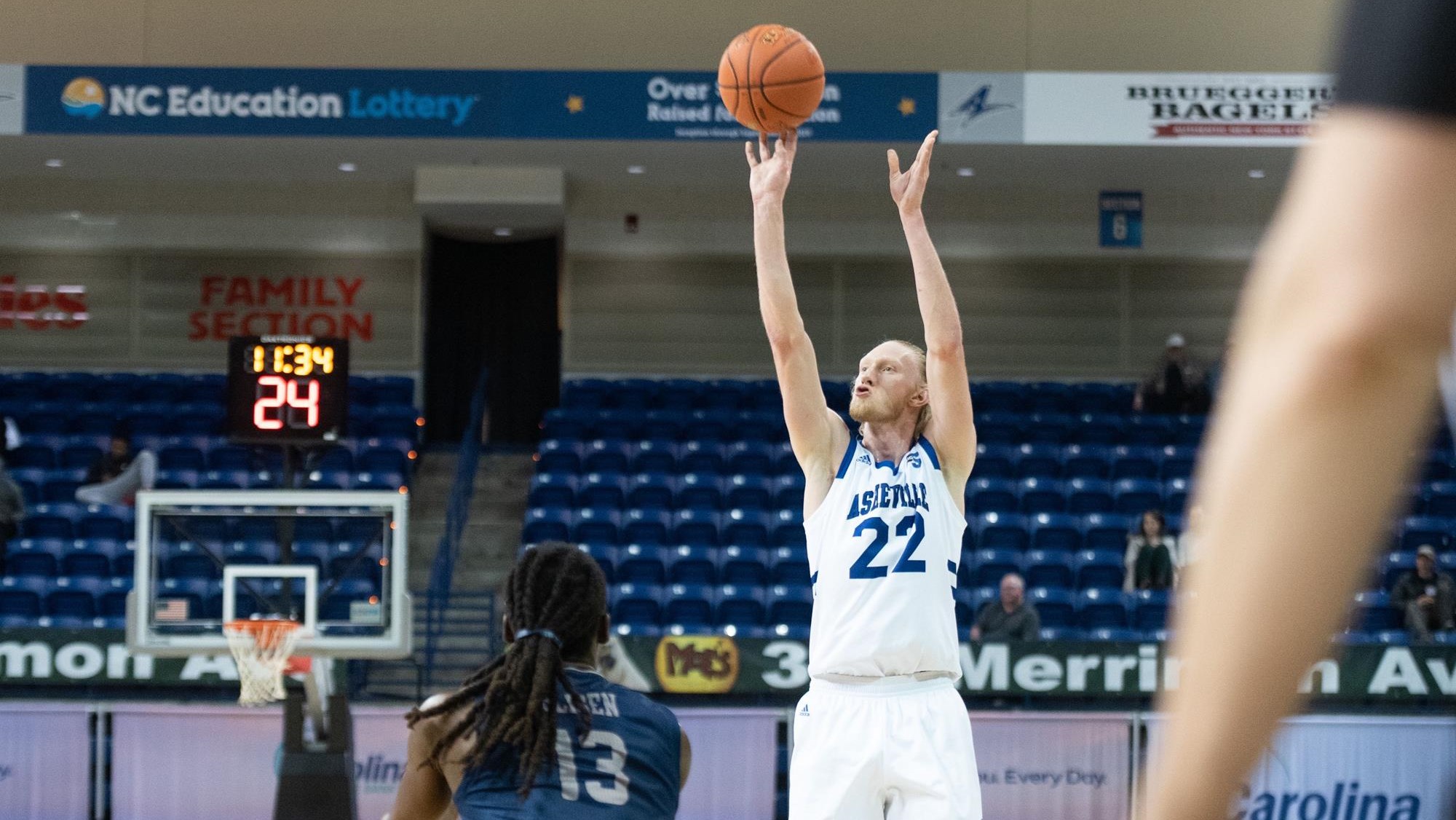 Coty Jude's touch from the perimeter is a big reason he's a key piece for UNC Asheville. Photo courtesy of UNC Asheville Athletics

Sure, Jude holds the school’s single-game scoring record with 54 points, which happened to come in his final game with the Rebels — a sectional loss at Huntington St. Joseph.

That season, he earned his only all-state honors while at Tolsia as Jude was a Class A honorable mention selection.

“I had a good career there,” Jude recalled. “We weren’t ever good, but I did pretty well. We never even sniffed the state tournament, so I didn’t really have any personal accolades besides the 54 against St. Joe.”

Yet in a way, Jude’s basketball career didn’t begin until he left Tolsia in 2017.

While there, Jude received his first and only offer to play college basketball at UNC Asheville, a Division I program in the Big South Conference.

After Jude accepted the offer to play for the Bulldogs, however, then-UNC Asheville head coach Nick McDevitt left to take the same position at Middle Tennessee.

“It was basically like being recruited all over again,” Jude said.

Yet with a large roster turnover looming, Morrell and the new staff at Asheville were in no position to turn away players.

“I had never met him in person until he reported to campus,” Morrell said. “I’d only talked to him on the phone and seen some video of him. I was really impressed with some of the things he had to say in my initial conversation with him. We only had four guys returning at all, so I wasn’t in a position to not welcome somebody to the program because we had so much turnover.”

The rest, as they say, is history.

Jude started all 31 games at Asheville as a true freshman, averaging 9.4 points for the youngest team in Division I, which suffered through a 4-27 season.

“I had no idea who Mike Morrell was, so I was nervous coming in feeling like I had to prove myself again and not knowing what kind of players I was going up against,” Jude said.

As a sophomore, Jude again started all 31 Bulldog contests, this time scoring 10 points on average for a much-improved team that finished 15-16.

Jude’s perimeter shooting was a constant in each of his first two seasons at Asheville. As a freshman, 68 of his 91 field goals were 3-pointers, while Jude connected on 72 treys during his sophomore campaign.

“The first thing that jumps out at you when you’re seeing him for the first time is his ability to shoot the basketball,” Morrell said. “He’s the best shooting forward I’ve ever coached and I’ve been at VCU and Texas. His ability to space the floor is really hard for opponents because you always have to know where he’s at.”

Jude, who estimated he was 6-foot as a high school freshman and 6-7 when he left Tolsia, has spent the majority of his time with the Bulldogs playing center or power forward. Currently listed at 6-9, 190 pounds, Jude often gives up a lot of weight in his matchup with opposing frontcourts, though that can sometimes play to his advantage.

“The first year was really rough, because with the starting five we had, everybody was a freshman and I was playing (center),” Jude said. “But that’s fine on offense, because I can pull the big guys out and space the floor. On defense, it’s hard sometimes, but it’s all about fight and if I can keep them from catching the ball, they can’t score. I just try to outwork them.”

Jude, who’s playing more power forward than center these days, hasn’t started the 2020-2021 season as well as he hoped to. After missing the Bulldogs’ first two games with a wrist injury, Jude has played in the team’s seven contests since. He’s averaging 7.6 points on 35 percent shooting and has made 13-of-43 tries from beyond the arc. The 7.6 points are sixth best on Asheville (4-5), which lost both games Jude missed.

“He’s not been pleased with how he’s shot it this year, but it’s only a matter of time,” Morrell said. “He’s such an aggressive shooter from the perimeter and he demands so much respect. Up until this year, Cody had started every game in college and the only reason he hasn’t this year is because of the injury. That tells you how respected he is in our program.”

With more than half of this season remaining, Jude has plenty of time to get back on track — and history suggests he will get hot from the perimeter before long. Jude is currently eighth in school history in 3-pointers, and health permitting, will likely finish no lower than second on Asheville’s all-time list.

“The opportunity is always there if you work hard enough,” Jude said. “Just because a lot of players from West Virginia, especially in my area, are a little neglected, don’t let it hinder your work ethic. One of the main things I tell people is a lot of dudes think they have to be good at everything whether they’re small or big. You don’t have to be good at everything. Find what you’re good at and be great at it. For me, that’s shooting from the outside.

“This couldn’t have worked out any better for me,” Jude added. “If I could go back, I’d make the same exact choice without a fraction of a doubt.”