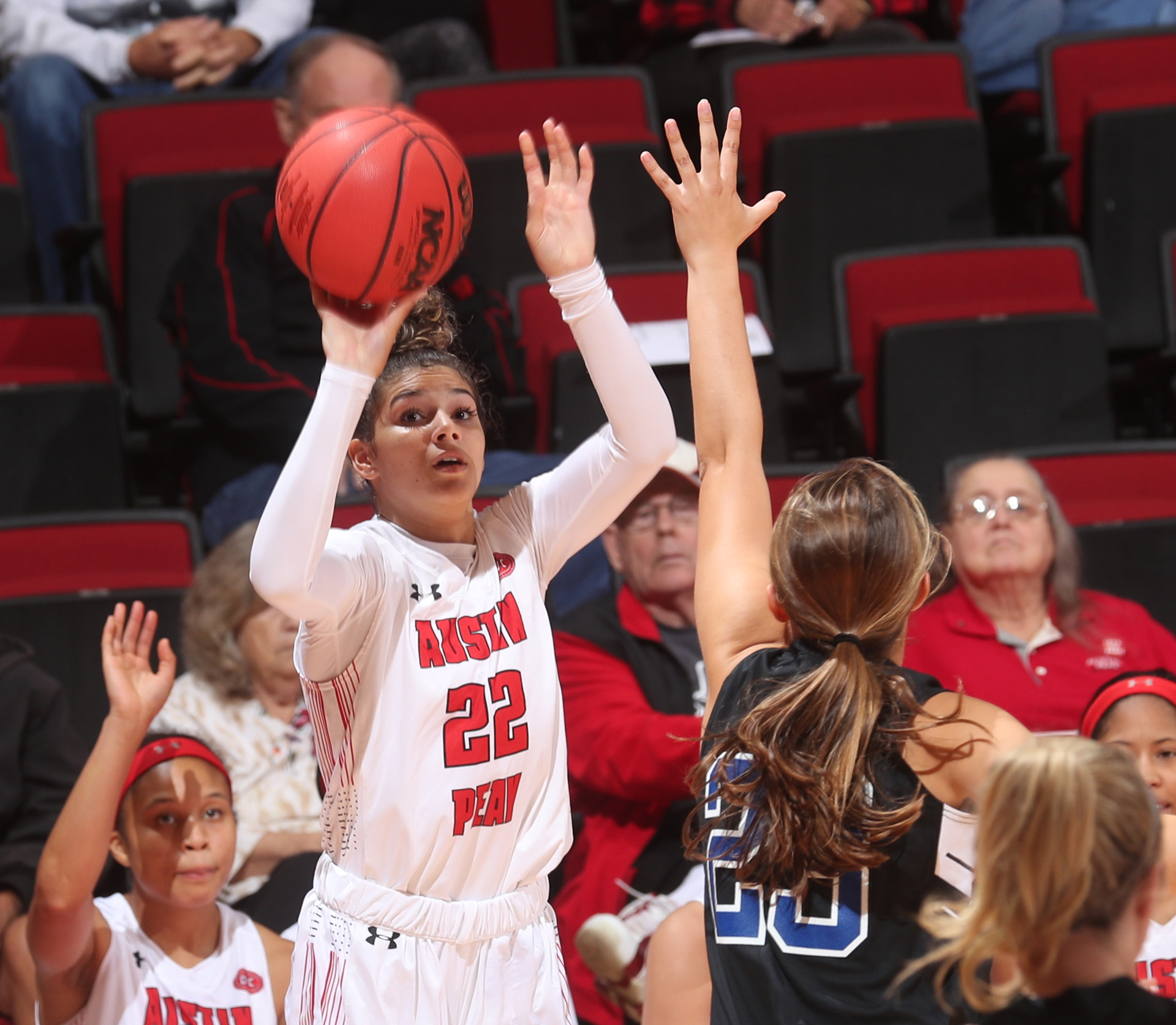 Shay-Lee Kirby has increased her production and playing time during her sophomore season at Austin Peay. Photo Courtesy of Austin Peay Athletics

Shay-Lee Kirby will long be remembered at Parkersburg High School, where her success on the hardwood helped lead the Big Reds to consecutive Class AAA state championships in 2018 and 2019.

At the rate she’s going, Kirby could also carve out a strong legacy at Austin Peay State University, where the the 5-foot-10 wing is currently playing her sophomore season.

One year after seeing action in all 30 contests and averaging 6.4 points for the Governors as a true freshman, Kirby has started her second collegiate season with an increase in minutes and production. Kirby’s 7.8 points per game average is tied for fourth on the team, while her playing time has jumped from 17.5 to 26 minutes on average.

“It’s a big transition from high school to college,” Kirby said. “The game is a lot faster and there are girls just as good and better. That really helped my game get better.

“You never come in as a freshman and expect to get that much playing time. Doing that boosted my confidence and showed me they believed in me. It was a really good thing to see some playing time as a freshman.”

This season, Kirby has played in six of APSU’s nine games, missing three after returning to Parkersburg following the death of her grandmother Dec. 21. She started each of the team’s first five games and had a career high scoring output with 24 points in a season-opening win against North Alabama. Kirby also recorded three steals in that game and has seven for the season. Kirby’s points and minutes per game totals would both be higher were it not for her going scoreless in 6 minutes in the team’s Jan. 9 win at Eastern Illinois as she worked her way back into game action.

“I don’t think anything substitues for game experience and having some success and failure and learning from it,” Austin Peay coach David Midlick said. “It was highly beneficial for Shay Lee to get playing time last year. Any minutes are meaningful and she played a bunch.”

Austin Peay, which finished 18-12 last season, is off to a strong 7-2 start this year. Despite being chosen ninth in the Ohio Valley Conference preseason poll, the Governors are off to a 5-0 start in league play.

“Being picked ninth was kind of an eye opener for us,” Kirby said. “It made us think about proving everybody wrong. Being 5-0 is a really good thing for us, but we can’t be satisfied with where we’re at.”

Kirby, who won the Mary Ostrowski Award in 2019 as West Virginia’s top prep player, has made 11-of-29 3-point attempts one season after finishing second among OVC freshmen with 45 triples. Her strong defensive play was often on display during a stellar career with the Big Reds, but the perimeter shooting came as an added bonus for Midlick’s team.

“We knew that she was really good in the press, which we like to do, and playing 1-on-1 defense,” Midlick said. “She was a pleasant surprise with how well she shot the basketball and we want her to continue to do that and take next step, which is putting the ball on the floor more and creating for herself and teammates.”

As she continues to develop offensively, Kirby hopes to expand into a player whose penetration becomes a big asset for the Governors.

Kirby is the lone West Virginia native on the Austin Peay roster, though her dad lives nearby in Hendersonville, Tenn. Midlick and his staff discovered Kirby after seeing her play for the West Virginia Thunder on the AAU circuit.

“We know that program and we saw her play. You make calls after tournaments are over to see where certain players are that you like and if they’ve already committed,” Midlick said. “Shay Lee had not and she had connections in Tennessee with family, so we were fortunate. She visited here and liked us and now we’re fortunate she’s here with us.”