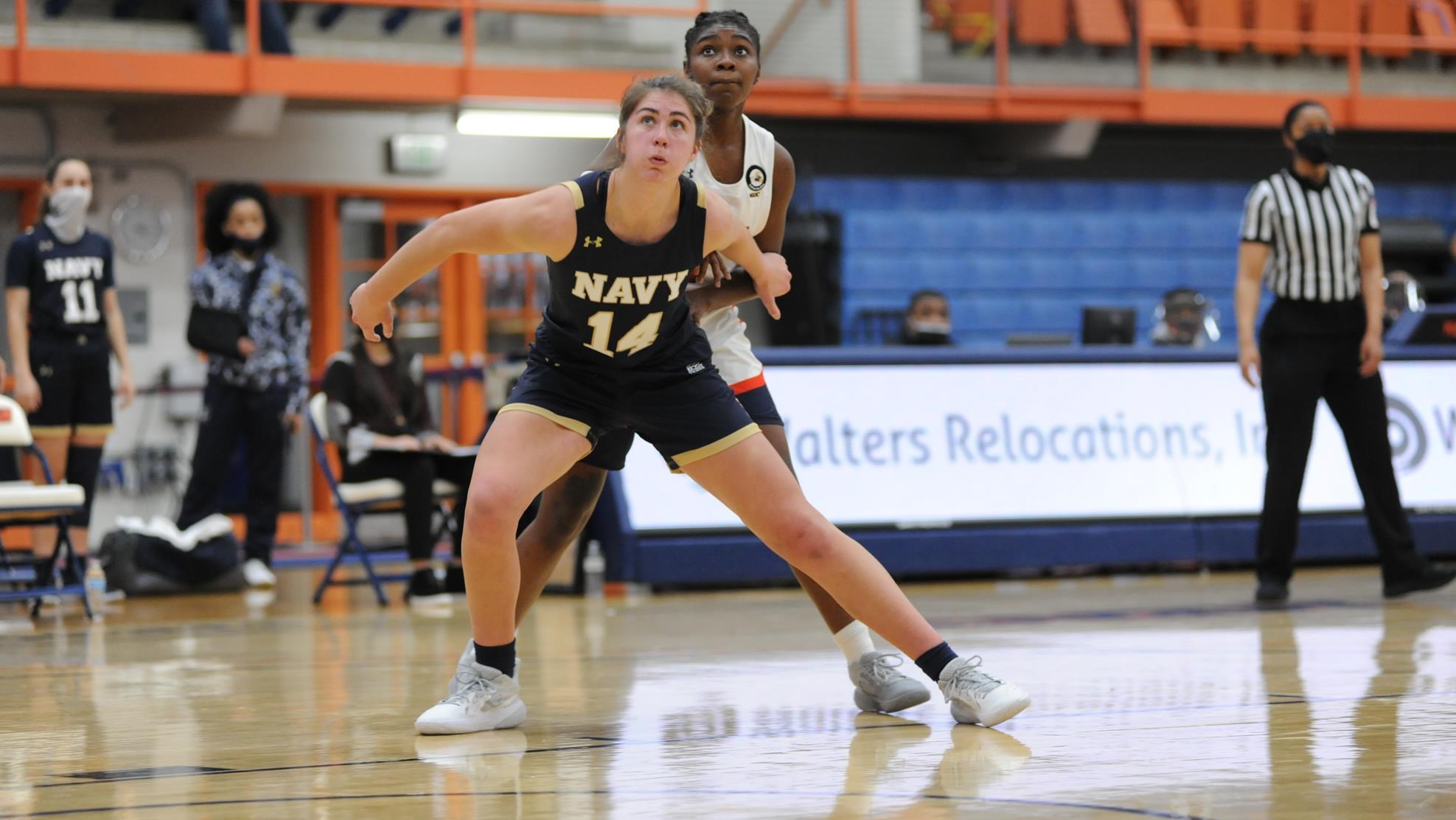 Morganne Andrews has seen action in each of her first eight games at Navy. Photo courtesy of Navy Athletics

Morganne Andrews is anything but a typical college freshman.

“I’m up around 6 or 6:30, and depending on the day I have plebe duties,” Andrews said. “I grab breakfast, then I have four classes in a row. Then there’s training and I grab some sort of lunch. There’s class after lunch and then it’s straight into practice. I get a shower, hit the books and start all over again the next day.”

Andrews, a 6-foot-1 newcomer to the Navy women’s basketball program, is continuing to acclimate to her lifestyle on the Annapolis, Maryland campus — less than two hours from her hometown of Martinsburg.

“I had my eye on the Naval Academy pretty much since the start of me looking at colleges,” Andrews said. “I knew this is where I wanted to go and basketball was just the cherry on top.”

A Class AAA third-team all-state selection each of her final two years at Martinsburg, Andrews was instrumental in leading the Bulldogs to the state tournament as a senior.

However, she never got the chance to finish her prep basketball career when the season was cut short at the start of the COVID-19 pandemic last March.

Despite the empty feeling of no closure to her playing days at Martinsburg, Andrews has continued on the hardwood at Navy.

Andrews has played in all eight of the Mids’ games this season, starting three and logging more than 16 minutes on average.

With 16 points and 31 rebounds on the season, Andrews is continuing to adjust not only to a new lifestyle, but also Division I basketball.

“It’s been a challenge,” she said. “The biggest thing is it’s different. Everything is harder and faster and everyone is better.”

Andrews’ highest scoring output to date was six points against Morgan State, which came one game after she grabbed 10 rebounds against William & Mary.

“Any freshman that gets any sort of playing time at the Division I level should be thankful,” Andrews said. “I’m thankful for the time I get and I try to make the most of it.”

One of Andrews’ biggest adjustments has been competing against players with just as much or more height. Although she is listed as Navy’s tallest player, Andrews was often the tallest player by a wide margin in high school regardless of the opposition.

“The girls are bigger and their feet are faster,” Andrews noted. “I wouldn’t say I’m completely adjusted and have figured all that out. It’s definitely a process and a learning experience going from the biggest player on the floor to an average sized player at times.”

Navy (2-6) lost its first five games, but has won two of three since, including a split over the weekend with Army.

As the team gains confidence with improved results, Andrews does as well. She’s one of three freshman to see action in all eight contests to this point and believes she’ll grow more comfortable playing away from the basket as she gets more experience doing so.

“Stretching my game out further will be big because I primarily played in a five or 10 foot arc in high school being the biggest person,” Andrews said. “I’m trying to stretch my game to 17 or 20 feet and hopefully that’s something I can accomplish in the near future.”

In the meantime, Andrews, who served as the President of the National Honor Society at Martinsburg, is hopeful her experiences at the Naval Academy help set up success for what’s ahead in the future.

“My dad was a Seabee in the Navy and just continuing that tradition is always something I can be proud of to say I’m following him in the Navy,” Andrews said. “You can go anywhere from this school. Anybody looking at a resume that sees you’ve graduated from the Naval Academy, it puts you one step ahead. It prepares you for any job in the future and also provides job security for when you’re out of college.”