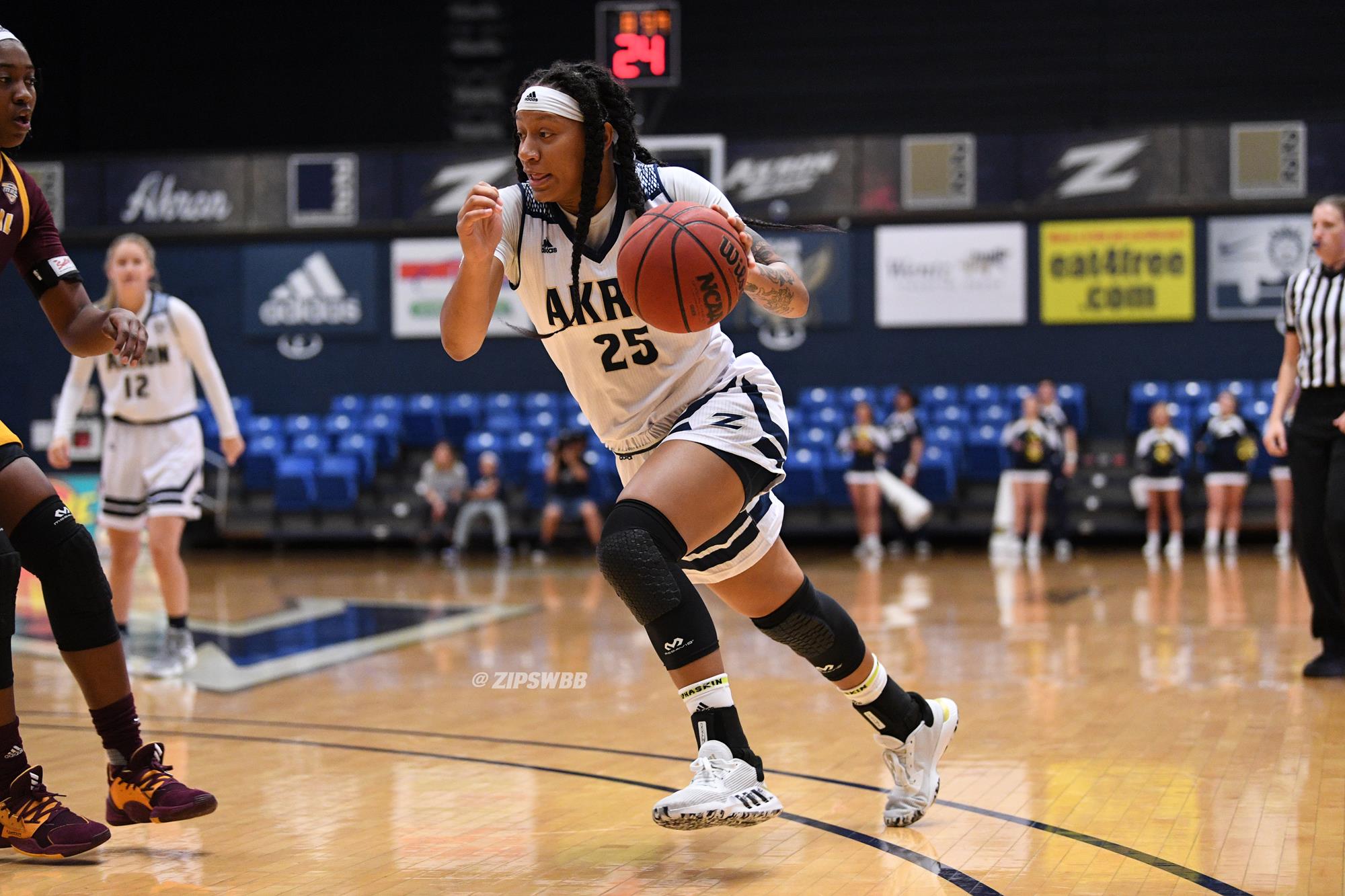 Third-year Akron women’s basketball coach Melissa Jackson thinks back on her days as the Zips’ recruiting coordinator when she was recruiting Jordyn Dawson.

“I recruited her a bit, but I couldn’t get her to even look at Akron honestly,” Jackson said.

Four years later, Dawson has developed into one of Akron’s more decorated players over the last decade.

Dawson settled on Wabash Valley College (Ill.), where she made a major impact on a 32-1 team that was ranked No. 1 nationally at the junior college Division One level. After averaging 9.8 points and 6.2 rebounds, Dawson went back to the Division I ranks and made Akron her third school in three years.

“It was a roller coaster moving school to school, but I definitely feel like I’m at home and settled in,” Dawson says. “(Wabash) was a big transition and it honestly felt like high school at times again. It was good for me to go that route because it humbled me even more. Everything was different.”

Dawson, a 5-foot-11 senior, started 26 games last season for the Zips and was second in scoring (13.4 ppg) and rebounding (7.2 rpg) en route to being an All-Mid American Conference honorable mention selection. Her 53 steals were best on a team that finished 15-15.

“We’ve only had her a year-and-a-half now and we’ve seen great development from her,” Jackson said.

Dawson has spent most of her time at Akron playing small forward or power forward, though Jackson admits, “last year she played a lot more at the 4 than we wanted to.”

Dawson’s versatility is a major asset for Akron, and in Wednesday’s loss to Buffalo, she played point guard and registered an impressive stat line of 16 points, seven rebounds and seven assists.

“I’m most comfortable playing the 3, but if the coach asks me to play a certain position, I can play that position,” Dawson said.

Although the Zips have struggled through a 4-10 season entering Saturday’s contest at Ball State, Dawson has increased her production from a season ago.

“I’ve gotten used to the game now and I’m moving around at different positions so I’m learning a lot of things as well,” Dawson said. “This team looks up to me and they look to me when stuff is kind of hectic.”

Although Jackson is thrilled with Dawson’s ability to fill up the stat sheet, it’s her approach to the game that’s most impressive to the coach.

“One of the best things she brings to our team is toughness,” Jackson said. “She competes in every drill we have in practice and that starts with sprints in the preseason. The freshmen see how hard she’s working every day and there’s not a day she ever takes off.”

Dawson, whose brother Mikal plays for Akron’s men’s basketball program, is the lone senior on the Zips. However, she says she plans to use her free year of eligibility and return to Akron next season before pursuing a professional basketball career.

“My dream is to play in the WNBA, but I’m still working to get there,” Dawson said. “I definitely want to play professionally though.”