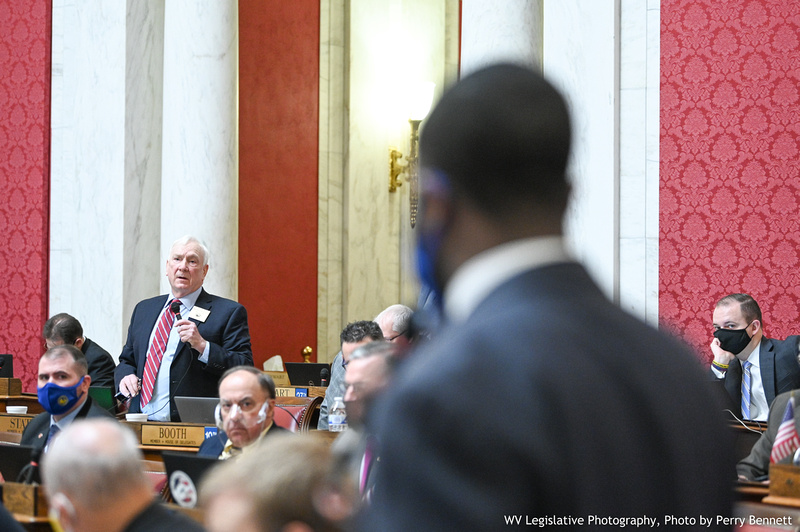 Beginning the first full week of West Virginia’s legislative session, a bill allowing more charter schools and more paths to approve them is already on the verge of passage in the House of Delegates.

The House will vote on the passage of House Bill 2012 during its 11 a.m. Tuesday floor session. Delegates considered several amendments to the bill during their Monday floor session, rejecting several offered by Democrats.

Providing more flexibility for charters was one of the goals announced by the Legislature’s Republican majority prior to the start of the annual 60-day session.

“We felt it was necessary to go ahead expand the charter school program,” said Delegate Joshua Higginbotham, R-Putnam, the vice chairman of the House Education Committee.

“We feel that now that covid is kind of winding down — we’ve still got a few months left of it — students and parents are going to want more choices in education. And we think that charter schools is one of the solutions to that.”

The bill would increase the number that could be approved in a three-year period from three to 10. And it would lay the groundwork for charter schools that would operate virtually.

Because Republicans have supermajorities in both chambers of the Legislature, they can push the bill through quickly since they have made it a priority.

West Virginia’s legislature approved the establishment of charter schools two years ago after months of debate on an omnibus education bill. Gov. Jim Justice signed the bill into law in June, 2019.

No charter school has yet been approved in West Virginia. An application was submitted in Monongalia and Preston counties but rejected last fall.

Democrats, speaking today to lay out their own agenda, didn’t see the current bill as necessary.

“The bottom line is, the charter school policy they tried to implement last year and the year before does not help all West Virginians when it comes to the education system,” said House Minority Leader Doug Skaff, D-Kanawha.

“Once again, we got our priorities all screwed up. They tried to get a couple of charter schools last year; that didn’t work. Now we’re going to up it to 10 charter schools. I just don’t understand how this is putting the priority on all West Virginians in the education system.”

Two years ago, West Virginia’s teachers unions went on a statewide strike over a broad-ranging bill that included a provision to allow charter schools. By comparison, the reaction to this bill has been muted so far.

Delegate Mick Bates, D-Raleigh, said that kind of pushback hasn’t happened because teachers have had such a complicated, difficult year. During the coronavirus pandemic, many have been teaching classes to students in-person and online at the same time.

“People are just exhausted by it all. Their ability to be able to fight back is limited right now.”

House members approved an amendment by Delegate Joe Statler, R-Monongalia, directing the newly-established Professional Charter School Board to investigate official complaints about serious impairments in the quality of education.

That amendment passed. Delegate Pat McGeehan asked if the provision could be used to bog down the system. “Could you foresee a situation where they’re just swamped by complaints?” asked McGeehan, R-Hancock.

Delegates approved another amendment proposed by Education Chairman Joe Ellington that would require two or more counties to work together when they’re authorizing the same project. That one passed.

Another amendment by delegates Mike Pushkin and Sean Hornbuckle, both Democrats, directed three of the 10 possible charter schools to be established in areas where students have lower achievement rates.

“It’s putting at least three of them in the areas of greatest need,” said Pushkin, D-Kanawha.

Skaff, speaking at the Democratic priorities event, acknowledged Republicans have enough votes to pass whatever they want. But he said Democrats have an obligation to ask questions and try to shape legislation.

“We’re in the superminority,” he said. “They can run whatever piece of legislation they want. Doesn’t mean we won’t hold them accountable and speak up.”