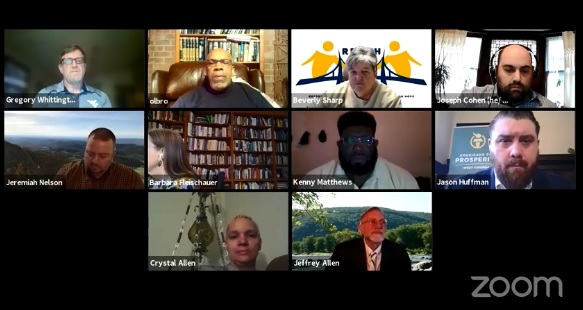 CHARLESTON, W.Va. — When she was first sentenced to time in prison, a West Virginia woman said she did not know what to expect.

When she was released, she had little support, but eventually worked her way toward earning a real estate license.

Others, she said, don’t know that kind of path is possible.

“(They say) ‘I have a felony on my record. I can’t do nothing with that. I’m already hindered.’ So you have to create yourself a job and it’s hard at times if you don’t have that support,” Allen said.

Allen, with the West Virginia Family of Convicted People, spoke during a Monday Zoom event focused on proposals for criminal justice reforms that could be taken up during the 2021 Regular Legislative Session.

“The reason why a lot of people re-offend is because they don’t feel like they have a place, a sense of purpose within the community, within the state, within the society in general,” said Kenny Matthews, a West Virginia man who is currently on parole for a drug conviction dating to 2017.

“From the moment they set foot in front of a judge, there should be things that are done and programs offered to allow them to have that sense of purpose knowing that they don’t have to be defined by a mistake.”

Along with Allen and Matthews, other participants included Delegate Dianna Graves (R-Kanawha), an advocate for juvenile restorative justice, and Delegate Barbara Evans Fleischauer (D-Monongalia), who spoke about needs for transitional assistance after prison.

“We’re talking about a criminal justice system and status quo that, unfortunately, has a proclivity to trap people in a cycle of poverty and recidivism,” said Jason Huffman, state director of Americans for Prosperity.

“What we have to do is step away from that sort of a system so that our criminal justice system becomes smarter on crime and softer on taxpayers.”

Between 2009 and 2019, West Virginia’s prison rate grew by ten percent, organizers said, compared with a 16 percent national decline during the same time period.

COVID-19 has added another layer of pressure to an already taxed and overcrowded system.

Investments in people charged with crimes translate to longer-term improvements in their communities, Matthews said.

Those investments, in his view, must start early.

“The moment somebody steps into the criminal justice system, the moment that they step into a correctional facility, that’s the moment that separation, that feeling of being not a part of the community that you are coming from, begins,” he said.