Proposed antlerless hunting regulations on private land called for nearly identical regulations in most of the state as 2020. The only proposed changes included an bag limit for antlerless deer to one in Pocahontas County and to three in Mason County for this fall. Biologist proposed scaled back opportunities to kill antlerless deer in Preston County of 3 with a special regulation to a bag limit of 3. Cabell County would see the bag limit reduced from 3 to 1. The northern section of Kanawha County would see the number of permits to kill antlerless deer go to a drawn permit and only 400 would be issued. Boone County’s limited antlerless permits would drop from 400 to 300.

Season dates for antlerless hunting would be October 21-24, the two week concurrent buck season from November 22-December 5, December 9-12, and December 28-31.

“What we found was not a lot of people who hunt the National Forest know which management unit they are on,” DNR Game Management Supervisor Keith Krantz told the Commission. “We recommend you manage the National Forest based on the county. It simplifies the table and hunters know what county they are hunting.”

Last year hunters killed 38 bears in those counties during the season which coincided with the early antlerless deer season.

Carpenter indicated the agency wants to increase the harvest of bears in Boone, Kanawha, Fayette, and Raleigh Counties by extending the early hunting seasons in those counties. The order of the early bear seasons with and without hounds is also proposed to change. Season dates are proposed as August 28-September 6 and October 30-November 5th in Boone, Fayette, Kanawha, and Raleigh Counties. Traditionally the early season for those counties had been the first week of October.

The early season for Logan, McDowell, Mingo, and Wyoming Counties which has always been the earliest will be September 11-17 and October 2-8. Biologist said it would result in two fewer hunting days in the firearms hunting season for bear, but the split season should prevent a drop in harvest.

“2020 was our worst nuisance complaint year ever. The most complaints were in those counties Raleigh, Boone, Fayette, and Kanawha. That’s why we’re proposing to lower the population in those counties,” Carpenter explained.

“We’re finally at the point we’re stabilizing the mountain population and hopefully bringing it down,” Carpenter told members of the Commission.

Gilmer and Ritchie Counties are also proposed to be opened up for bear hunting with dogs during the traditional season from December 6-31.

A different kind of bear hunt is also being proposed for consideration. The DNR proposed a Special Urban Bear Archery/Crossbow Season to be implemented in incorporated limits of a city, town, village, or homeowners association at the direction of the DNR Director if those areas have defined boundaries. The season framework would be the same as the current Special Urban Deer Archery/Crossbow Season. But during his remarks, Director Steve McDaniel said there would be far more scrutiny given to an urban bear hunt than an urban deer hunt.

“Shooting a bear with a crossbow or a bow is a little bit more detailed than shooting a deer. We want to make sure we protect not only wildlife, but also folks who live in these neighborhoods before we approve them,” said McDaniel.

He told Commissioners he put together a committee of biologists and law enforcement members who would scrutinize any requests for a special controlled bear hunt.

Other proposals for the 2021 hunting regs will be to allow wild turkey to be added to the Mountaineer Heritage Season. Foster mentioned the agency had received a number of calls requesting turkeys be added to the special January season where hunters can currently take deer or bear with primitive weapons.

“We’ve had a pretty good discussion about it and overall we really feel the harvest will be insignificant because we’re talking about a season with primitive weapons. Individuals have to wear blaze orange since it’s a firearms season for deer. So we anticipate the harvest will be very low and don’t think it will have an impact biologically.” Foster explained.

However, questions raised about going to an all day hunting season during the spring gobbler season were another matter. Foster indicated there had been conversations about such a change, but the consensus was to keep the hunting hours to a daylight to 1 p.m. time frame.

“We just added a fifth week to the spring season which will go into effect in 2021. We’ve got to be careful with that. We want to monitor the effect that additional week will have on the harvest and make sure we’re not harming the population. So we don’t think adding all day hunting a good idea right now,” he said.

Foster added a number of southeastern states which have all-day turkey hunting in the spring have seen harvest figures and turkey numbers in recent years trending downward. During that same time, West Virginia numbers held steady.

The final consideration for changes to turkey hunting involved the fall season. The agency wants to poll hunters about possibly moving the fourth week of the fall turkey season into January of the following year. The question will be on the spring sportsman’s survey and will be accompanied by a question to gauge just how many people still participate in the fall turkey hunting opportunities

“I don’t know if fall turkey hunters would support that or not, so that’s why we put the question out there. We’re not adding days, we’re moving a week. My best guess is it will probably be a wash in terms of harvest and may actually result in a decline. We don’t think it would be significant one way or another,” Foster explained to the Commission. 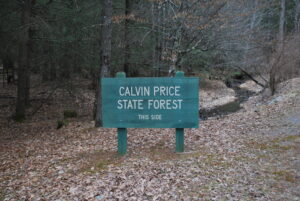 DNR Director Steve McDaniel also asked for a question to be added to the sectional meetings to gauge the input of sportsmen. It’s a question on creation of a potential trophy hunting area for deer in an early muzzleloader season. The question calls for the closing of deer hunting during the two week buck firearms season and the concurrent firearms antlerless seasons on the Little Canaan WMA, Canaan Valley National Wildlife Refuge, and Calvin Price State Forest. Crossbow and archery season for deer would remain open during the period. Instead of the firearms season, the Director proposed a one-week either-sex early muzzleloader deer season. There would be a one deer limit and any antlered deer would need to have a minimum outside antler spread of 14 inches.

“I’m constantly trying to find new ways to change our product and make it better. The commission has already spoken on the idea of lowering the buck limit. I’d like to look at the different areas we have further north to get older age buck management,” said McDaniel.

“I’m constantly hearing from bowhunters who say, ‘I want a place where I can go bow hunt for trophy deer without driving to southern West Virginia’. I also know muzzleloader hunters are looking for a an early season, but we don’t want to do one statewide as we’ve seen in neighboring states that kills your buck season and the buck season pays the bills,” McDaniel added.

He noted hunter participation and the harvest on the areas proposed, particularly the Calvin Price State Forest, are already extremely low according to recent data. The idea is only a question to gauge interest at this point and is not a proposal.

All of the proposed season dates, bag limits, and regulation changes will be put out for public comment during the March Sectional Meetings. But once again those “meetings” will be virtual rather than the traditional in-person face-to-face conversations between sportsmen and DNR personnel due to pandemic restrictions. Questionnaires will be posted to the DNR’s website and available in writing at all DNR district offices. Responses will be accepted via e-mail or U.S. Mail.

“We just don’t think it’s safe at this point for the public or our staff to have those in-person meetings,” said DNR Wildlife Chief Paul Johansen.

“Our staff actually found that many of the places we traditionally hold those meetings, will not allow a public meeting. They are erring on the side of caution and so are we,” he said.