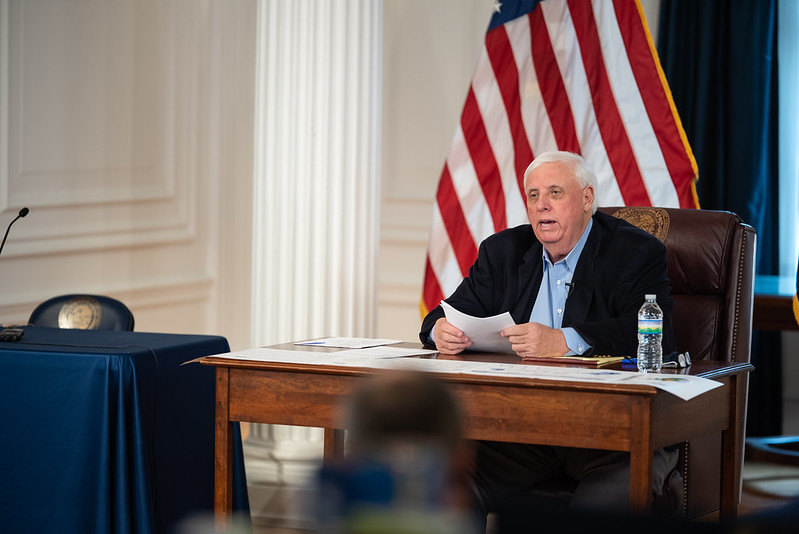 Gov. Jim Justice took citizens questions about his proposal to phase out the state personal income tax — which brings in $2.5 billion a year for services like education and healthcare — and suggested getting there would be relatively painless.

“We’ll have to a raise a tax here and there,” Justice said during a Monday afternoon Town Hall.

The governor has described the broad outline of what he wants to do. But he has not put it in writing or a slideshow. No bill has been introduced yet. There are not even scribbles on a whiteboard.

To understand what the governor wants to do, you have to listen closely and put on your Justice translator. Even then you might be puzzled.

“Overall, we didn’t learn much new about the specifics of Justice’s proposal other than the fact that he really believes that eliminating the PIT is a panacea for his state,” said Ryan Maness, senior tax analyst at the state and local government relations company MultiState Associates.

“I’m personally most interested to learn more specifics about his plan (particularly to expand the sales tax base to professional services),” said Maness, after following along with Justice.

The income tax brings in about $2.5 billion a year and represents about 43 percent of the state’s general fund.

Justice is envisioning West Virginia as the only state in the east without an income tax.

Justice debuted his vision of phasing it out the day after the General Election last fall. He expanded on the general idea during his State of the State address earlier this month.

Today, with a few hours notice, he announced he would address written questions from the public during a Town Hall event. And he said there would be more events, possibly as soon as Wednesday.

“This is a hot topic around our state and no question it ought to be a topic that is blazing hot,” the governor said.

Justice has proposed an initial step of cutting the income tax for all residents except for the highest earners. Those high earners might be cut by a third, and the rest by half. Justice has not defined those income levels or what level constitutes a high earner.

“I want the people of this state’s net tax burden to go down,” Justice said.

Although he had provided a rough outline of how he aims to make up the income tax gap during the State of the State address, today he did so almost an hour into the event when prompted by a question from a resident of Foster, Boone County: “How will the revenue loss to the state through the repeal of the income tax be replaced? Will other taxes go up? Will there be any new taxes?”

— Severance taxes for oil, gas and coal would be on a tiered system — with the sectors paying more when markets are better and less during tough times. But Justice has not yet offered specific implications. “We need our natural resource partners to help just a little bit.”

— Sales taxes for all West Virginians could go up 1.5 percent, although he said an upper range could be 1.9 percent. West Virginia’s sales tax right now is 6 percent. That doesn’t account for the additional penny added on by some municipalities.

— He proposed taxing professional services, but didn’t say which ones or how much. That could include economic sectors such as legal representation, accounting services, advertising, hair care or contracting services. “We need to have our professionals help a little bit,” he said.

—  Justice proposed adding sales tax on cigarettes and soda. “And we need to have our tobacco companies and our soft drink companies be able to help on that end a little bit as well.” There were few specifics about how much, but he tossed out 4 cents as a possible figure for the pop tax. At another point, he said maybe a nickel.

— He clarified that what he had earlier called a “wealth tax” instead would be a “luxury tax,” which he said would entail taxing the purchases of high-priced items. He did not outline what those items might be or the level of the tax. He brainstormed an example of someone buying a bracelet.

“My goal is to lower your taxes now,” Justice said. “There’s a million different ways this can be done.”

Justice acknowledged cuts would be necessary, describing about $25 million. But he said, somehow, they would be painless.

A citizen asked, “Will any state agencies have to take a budget cut?”

Justice responded, “No.” And he added, “We sure don’t want to start cutting services or anything else to achieve this.”

Another citizen asked about a common worry about this plan — that it might result in cutting the Promise Scholarship, which covers college tuition and fees for qualifying West Virginia students. Not a chance of cutting that, Justice said.

“No way. No way,” he said. “The Promise Scholarship has been wonderful for the State of West Virginia, and I hope we all recognize that.”

But if growth should happen to not result, the governor told citizens, there would be no harm.

“If the growth were not to come, you just stop. You don’t need to do anything else,” he said.

Maness, who analyzes tax proposals around the nation, was intrigued by what West Virginia’s governor was saying.

But he would like to know more. For example, about the luxury tax.

“My big takeaway is that he said that he didn’t mean to propose a wealth tax, but a luxury consumption tax. But he didn’t really provide specifics about what that would entail either,” Maness said.

And then there’s raising the sales tax or expanding it to cover professional services. How could raising it not be felt by consumers?

“I’d only note that his claim that higher sales taxes on goods and services won’t necessarily be passed onto consumer isn’t born out by the data,” Maness aid. “These taxes are inevitably passed on, because if it it costs more to do business then companies have to charge more to maintain their margins.”

Kelly Allen, executive director of the West Virginia Center on Budget & Policy, also wanted more specific recognition of how West Virginians might be affected. Her worry is that the same citizens who would be hit by higher sales taxes are the ones who could be affected by lessened resources for education and healthcare.

“Over the past 15 years, West Virginia has repeatedly gone down a path of tax cuts in an attempt to attract businesses and the wealthy. These efforts all fail because they ignore that businesses and families want quality education, infrastructure, and amenities, all things that are funded through tax revenues,” she said.

“As we emerge from the pandemic recession, it would be reckless to pursue austerity that results in fewer public services and tax shifts to those who have faced the most significant impacts of the pandemic- low- and middle- income families.”

By the end of Monday’s town hall, Justice hoped he’d persuaded the citizens, gained their confidence and moved them to action.

“As we go forward, you’ve got to rely on me to go with the right numbers and everything. As we go forward, I just hope and pray that we’ll take this to heart,” he said. “I would encourage all of you to call your representatives and express your viewpoint there.”