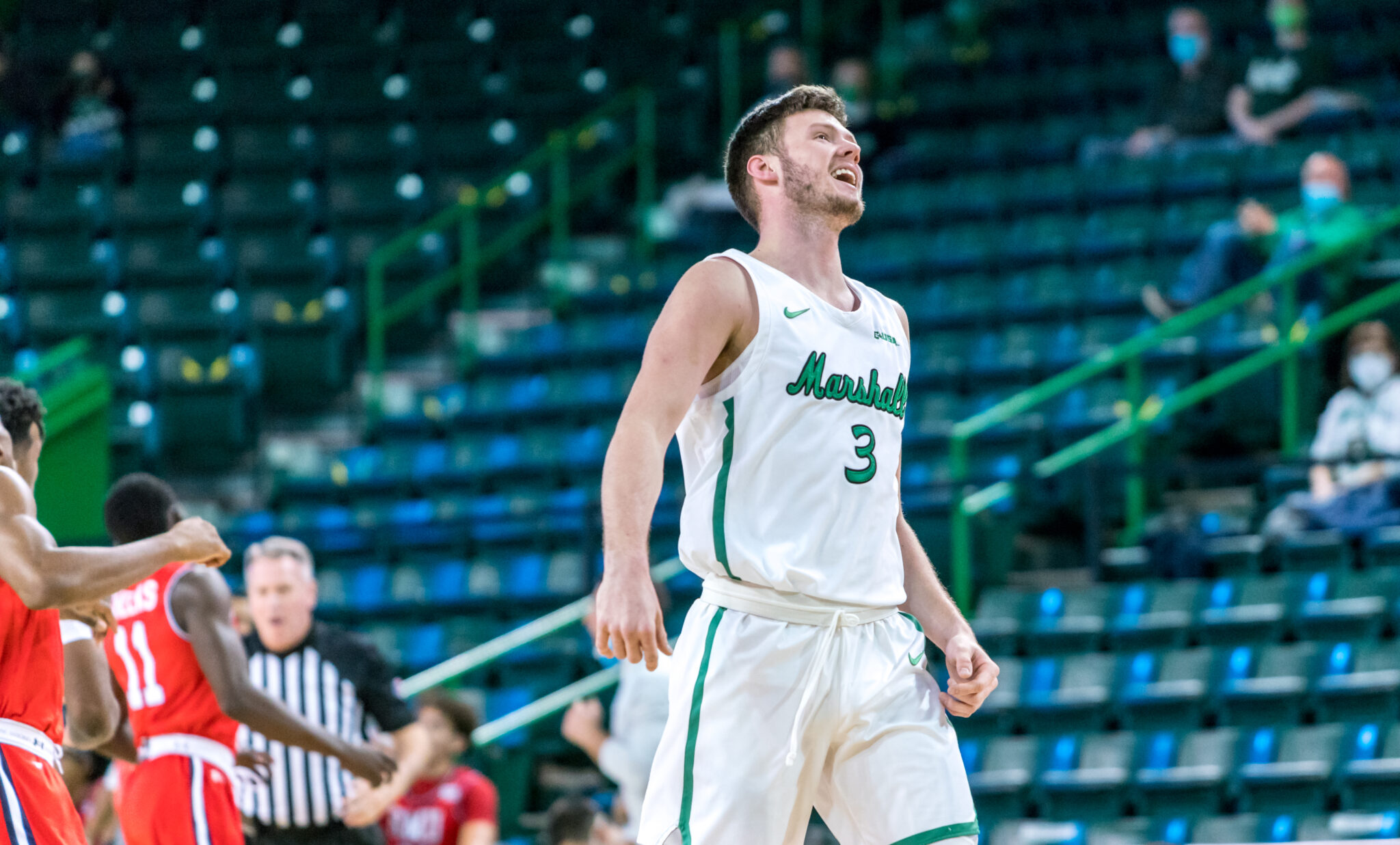 HUNTINGTON, W. Va.  – Marshall raced out to a 21-point lead early in the second half and went on to defeat Charlotte, 75-67, in Conference USA men’s basketball Friday night at Cam Henderson Center.

Herd coach Dan D’Antoni joked in the post-game radio show and news conference he needed to work on pregame and halftime pep talks.

Charlotte opened a 9-2 lead early and the Herd once led by 16, then got it to 21 before settling on the final margin.

“It’s not working,” D’Antoni said with a laugh. “Got to change what I’m saying, something. Lead by 16, they get it down to 10. Didn’t finish like we wanted. Andy (Taylor) and Taevion (Kinsey) were spectacular. Jannson (Williams) came through for us.”

Kinsey, the No. 2 scorer in C-USA, led the Herd with 19 points and grabbed nine rebounds. Taylor made 7-of-12 shots and netted 17 points and got eight boards. Williams finished with 15 points, eight rebounds and five of the team’s eight blocks before fouling out late.

Marshall nailed seven of its nine threes in the first half.

For Williams, it was his first game in double figures since Jan. 15 when he got 19 against Western Kentucky.

Jarrod West, Marshall’s senior guard, played 26 minutes and did not score. D’Antoni rested West and his sore ankle extensively in the second half with the big lead.

“Andy and Taevion stepped up big,” D’Antoni said. “As long as we keep those two guys going, we’ll be tough to beat.”

“Comes with chemistry,” Taylor said about how the team played without West. “Some dudes get hurt and don’t do anything. He’s out cheering us, telling us to do it like he does.”

Due to the Coronavirus pandemic and COVID-19 protocols, seniors can return for another year if they so choose.

“They’ve got a tough decision,” D’Antoni said. “It will be interesting times.”

Charlotte started well, but the Herd then took over. The 49ers opened a 9-2 lead with 16:21 left in the first half. After that, it was pretty much the Herd and its patented three-point shooting.

“We had a slow start and picked it up,” Kinsey said. “We were a little too lax in the second half. Didn’t finish like we should.”

Williams and Kinsey each scored 13 points for the Herd in the first 20 minutes.

Young led Charlotte with 10 points. The 49ers hit just  12-of-28 shots from the field, including 2-of-9 from three-point range.

Marshall now leads the all-time series against Charlotte, 12-7. Next week, all C-USA teams head to Frisco, Texas for the league tournament. Competition will start Tuesday. This series was scheduled Jan. 8-9, but got postponed due to COVID-19 and contract tracing in the 49ers’ program. Attendance on Friday was 1,076 due to COVID-19 protocols.