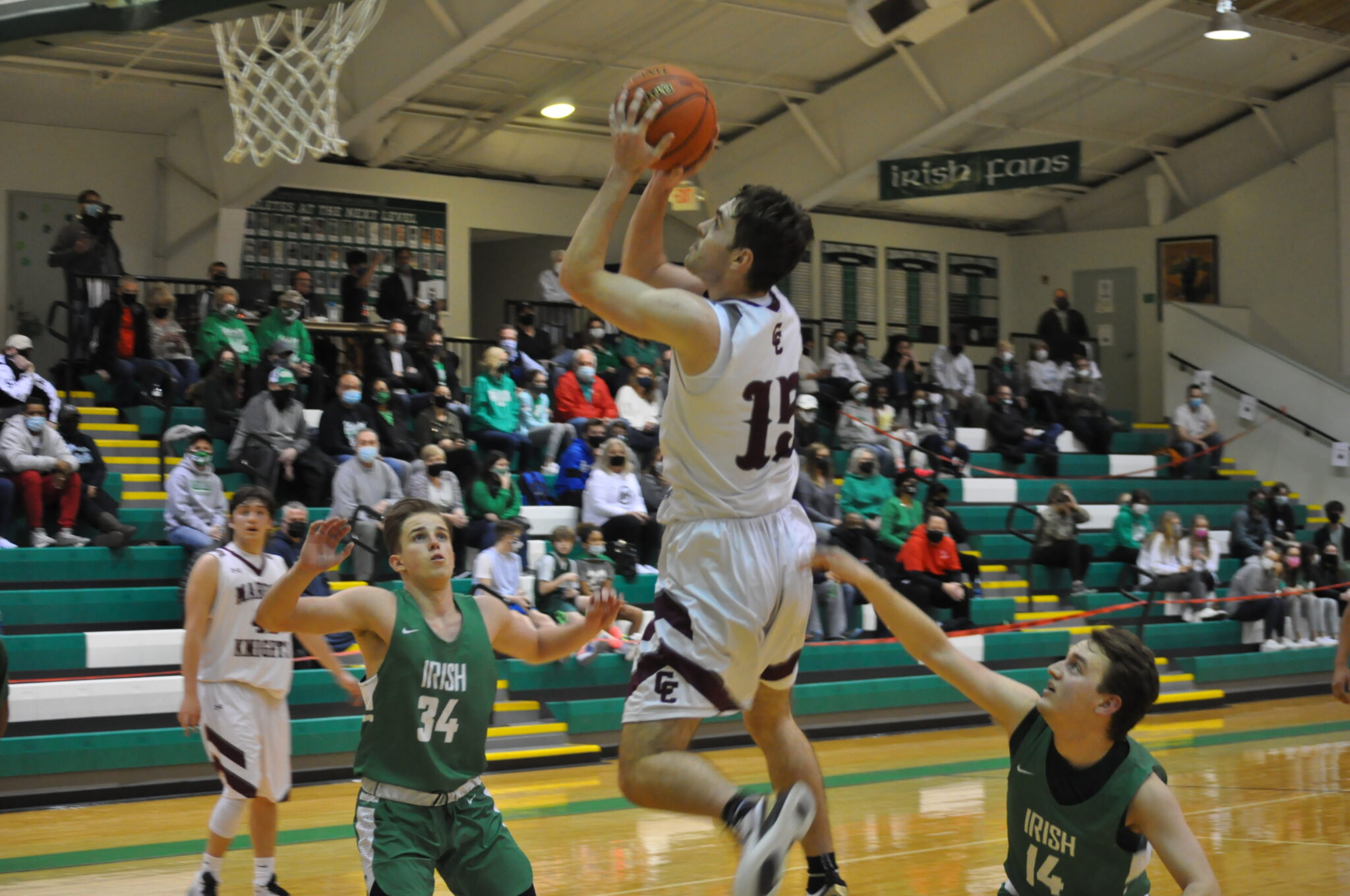 CHARLESTON, W.Va. — Wheeling Central and Charleston Catholic have long been two of the storied Class A boys basketball programs in West Virginia.

With the Maroon Knights now competing in Class AAA and the Irish up to Class AA, a drop-off doesn’t appear to be in store for either team based on Friday’s season opener at the CCHS Athletic Complex.

“These guys have been waiting a year to get back in the gym and play and to be able to come here and get a big win is big for them,” Central coach Mel Stephens said.

Reasbeck split two free throws with 49 seconds left in regulation to give Central a 60-56 lead, but CCHS point guard Zion Suddeth responded with a conventional three-point play 7 seconds later to cut the Irish deficit to one. After Reasbeck split two more free throws, Charleston Catholic tied the game on a bizarre sequence that saw Suddeth miss a pull-up jumper in the paint, only for the rebound to carom off the Maroon Knights’ Vinnie High and into the basket with 4.9 seconds left.

“We battled through a little bit of adversity and we were behind a little bit,” Stephens said. “Basically tipped one in for them to tie the game, but that’s the way it goes sometimes. My kids battled back from that and didn’t let it get them down. A lot of teams probably would have said, ‘Geez, we just tipped in for them, how are we going to win?’”

Caleb Ratcliffe, who led all players with nine rebounds and keyed the Maroon Knights to a commanding 40-19 edge on the glass, accounted for his only field goal of the night for the first points of overtime.

“He was an animal on the offensive boards and that’s what we needed,” Stephens said.

But that was all the offense Central could muster in the first extra session and Sudeth layup pulled the Irish even and allowed them to force a second OT.

Central led throughout the second overtime as J.C. Maxwell and Reasbeck each made 3-pointers to help put Catholic in a 69-65 hole approaching 1 minute remaining.

Charleston Catholic responded with a layup from Aiden Satterfield, who led all players with 28 points.

However, Reasbeck was fouled beyond the arc on the ensuing possession, and the guard made all three free throws to up the Maroon Knights’ lead to five.

“Ryan really stepped up big for us with some free throws and a couple big steals,” Stephens said.

Following a defensive stop, Michael Toepfer’s two free throws made it a seven-point game and helped seal the victory for Central.

“We told the guys that this game is going to help us in the long run,” Irish coach Hunter Moles said. “Sometimes losing can teach you more than always winning ever could.”

Central held a 25-19 first half lead, before Satterfield and Suddeth combined to score 12 points over the remainder of the half, helping the Irish hold a 31-29 lead at the break.

The Maroon Knights erased a 38-33 deficit with a 6-0 surge that featured a Reasbeck three-point play and Maxwell scoring inside. Catholic answered back with a 6-0 run of its own, before the Maroon Knights scored the final five points of the period to send the game to the fourth tied at 46.

Neither team made a field goal in the fourth quarter until Toepfer’s triple with 4:30 left, which gave the Maroon Knights a 52-50 edge.

Maxwell had 22 points and Toepfer scored 17 in the win. Reasbeck grabbed eight rebounds and dished out four assists.

Satterfield made 12-of-18 field goal attempts and Suddeth scored 17 points on 7-of-12 shooting in defeat.

“We don’t make a cupcake schedule for a reason,” Moles said. “We have a talented team and could put together a soft schedule and rack the record up. We’re not looking to do that. We want those type of games. We’d rather be in a dogfight than win by 20. We’ll take this game all day.”

WCCHS jumps back into action Saturday against Winfield as Stephens will coach against his son — Generals head coach Chris Stephens.

“This gives us a little bit of momentum,” Stephens said, “going into the family grudge match tomorrow.”