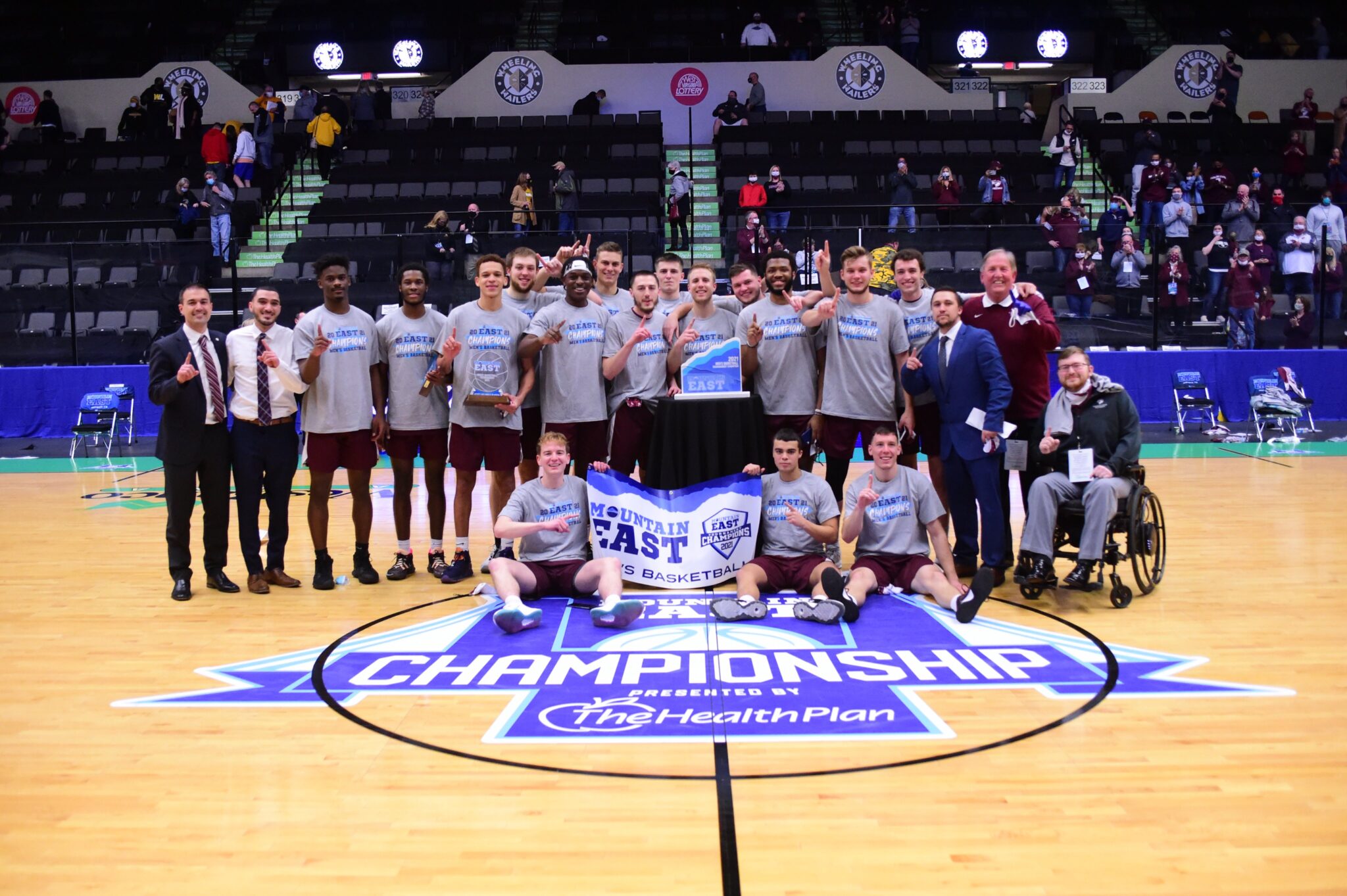 It is the Falcons’ first conference tournament title since 1984 when they were in the WVIAC.

“It was a crazy game,” stated FSU coach Tim Koenig. “Those guys fight till the last second and nothing is never over. They dinged us up well in the regular season. So proud of the guys and for staying with it. Leveled-headed throughout the runs. Huge win.”

Prior to the MEC tournament, there were no spectators allowed to attend games. The MEC allowed fans throughout this year’s conference tournament. Sunday afternoon the Fairmont State faithful was loud and electric the whole game.

“I am grateful for all of the support,” Koenig said of the community support. “I am thinking of the town, the former and current players, and previous coaches who welcomed us with open arms. I am so happy for the community and program.”

An 11-0 Fairmont State run in the first half gave the Falcons a comfortable lead. Sophomore Dale Bonner and junior Isaiah Sanders combined for 19 of the Falcons’ first 26 points.

Bonner was one point shy of tying a season-high in scoring. He finished the game scoring 34 points, including 18 in the second half.

“We just tried to make the right play,” Koenig said. “It kind of depends on how teams play and guard us. They packed it in the paint. They brought everyone to one side. We needed to reverse it. It was advantageous for us that he had to be the guy with those skip passes and reversals.”

Sanders received the MEC tournament’s most outstanding player. He became the first Falcon to receive that award in program histoy after scoring 25 points against West Liberty. He averaged 26 points in his team’s three tournament games.

“It is a feeling like no other,” Sanders said on winning the MEC tournament. “Everyone bought in at the right time. We had a couple of games where we struggled, but we regrouped and came together as one. The results showed. We played together and never gave up. I love these guys. We fought hard on both ends of the floor.”

West Liberty won both of the regular-season meetings this season. The Hilltoppers won by an average of 21 points, including a 30 point victory over FSU nearly two weeks ago.

“The last game we played at West Liberty,” said Sanders of his motivation going into Sunday’s game. “They handed it to us. I knew that is not the kind of team we are. My teammates and I wanted to go out there and show what team we are and prove a lot of teams wrong today.”

Koenig is in his second full season with the Falcons. He came from Notre Dame College in Ohio. So he has seen the ups and downs of the MEC throughout his coaching career.

“The league is so good,” noted Koenig of the league’s competitiveness. “You have to be ready to play every night. It makes me think of the year when three teams in the top four in the country were from our league, and none of those teams won the conference tournament. Our league is not the best, but I would like to see which leagues are better than ours.”

West Liberty clawed back from being double-digits late in the second half. The Hilltoppers dwindled the Falcons lead down to one with six seconds left.

West Liberty saw a season-high performance from Robert C. Byrd alum Luke Dyer. Dyer connected on 5-11 from behind the arc.

“He gave us a lift in an area that he typically does not give a lift in,” stated Howlett of Dyer’s outing. “He is a capable shooter. When he is open he has the green light. He is a jack of all traits. He does just about everything for us. We are fortunate to have him with us.”

West Liberty will be hosting the regional next week. Charleston earned the No. 2 seed and will have an opening-round bye. The Golden Eagles will face the winner of Saturday’s West Liberty-Malone matchup. Fairmont State is the No. 5 seed and will face Mercyhurst Saturday.