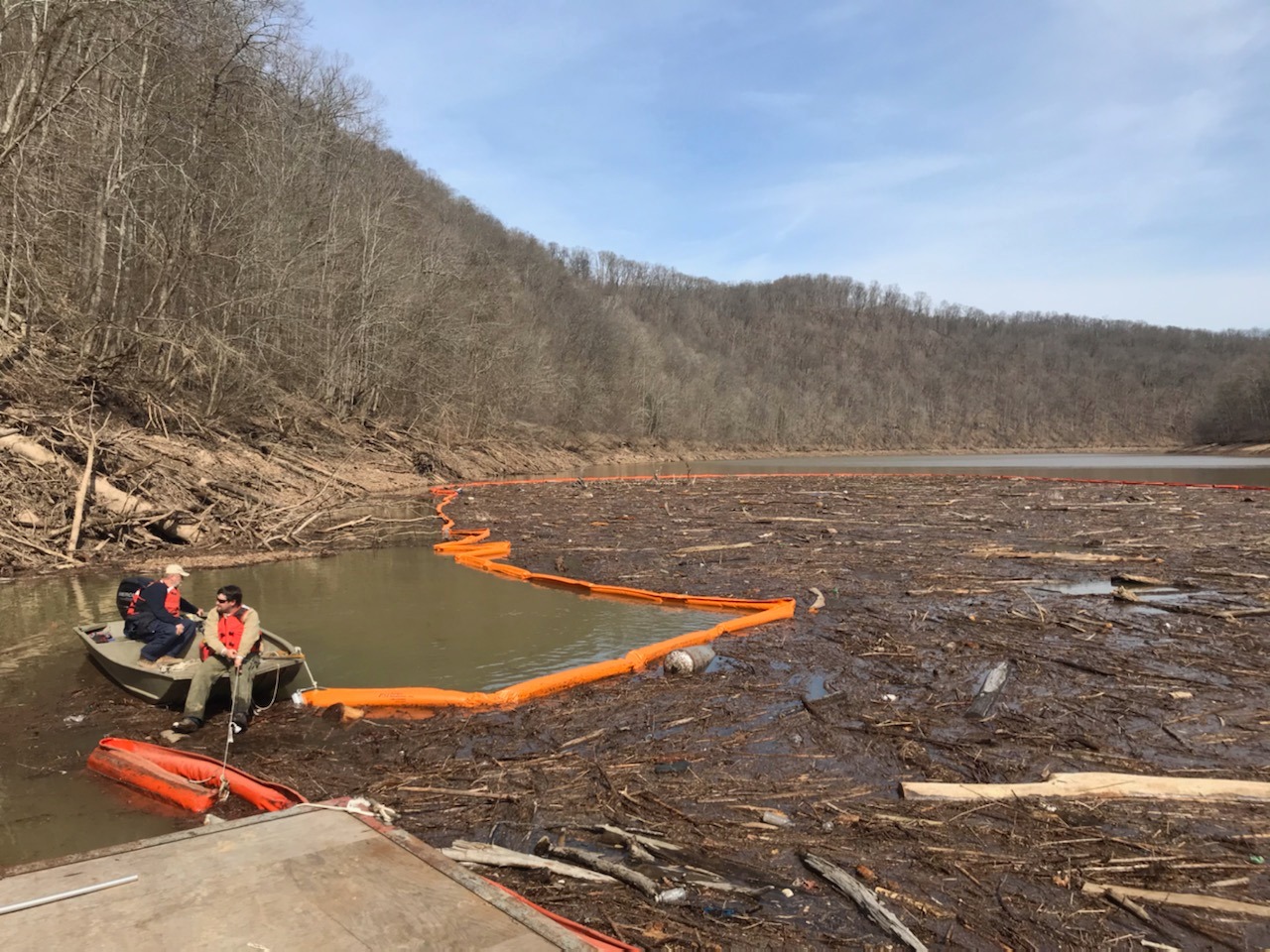 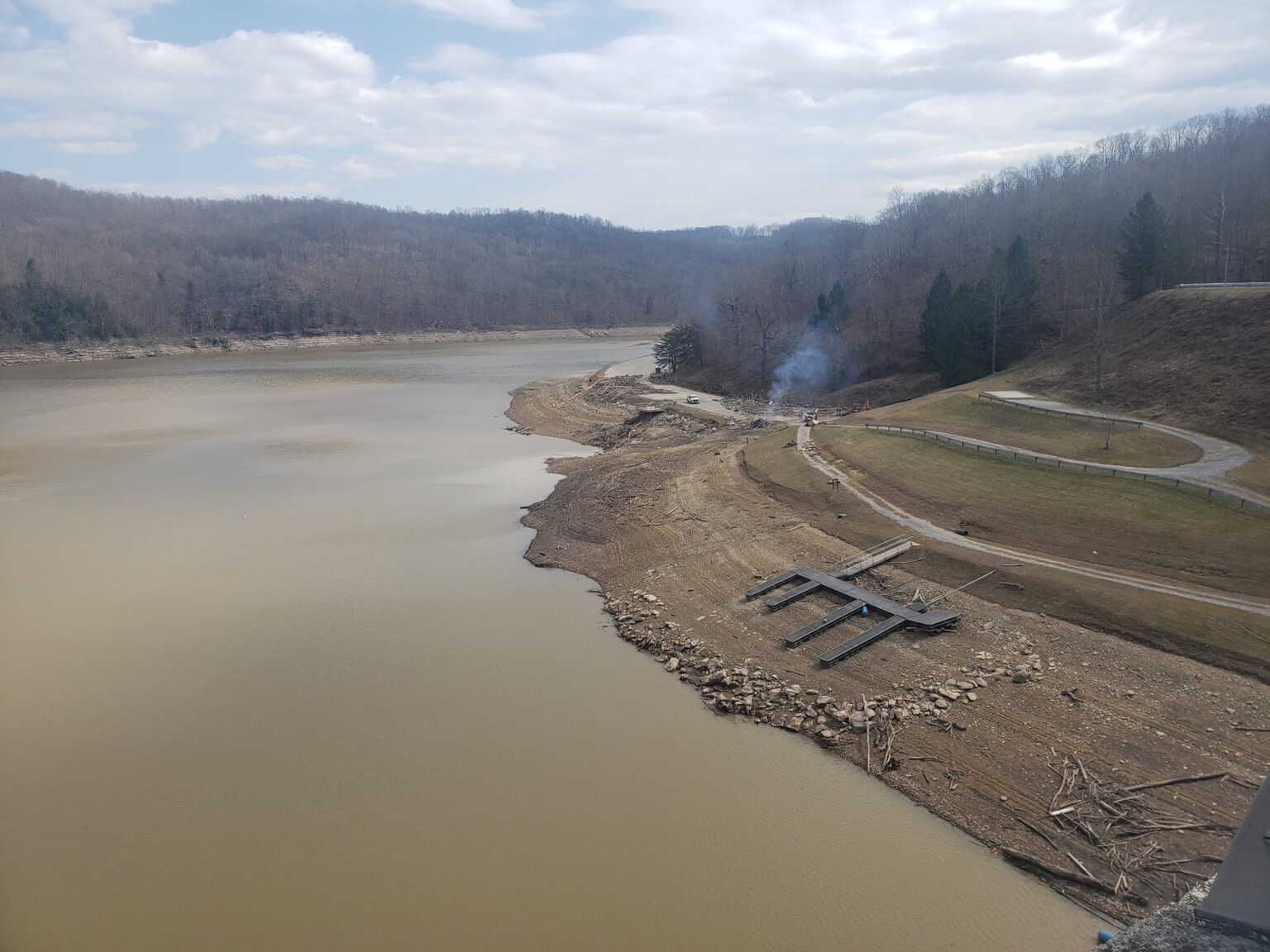 After crews separate the trash from the woody debris by hand, and use chainsaw to cut it down to manageable size, the debris is burned.

The drift is pulled to an area near the dam, one of the two locations where heavy equipment can pick it from the water to be worked. 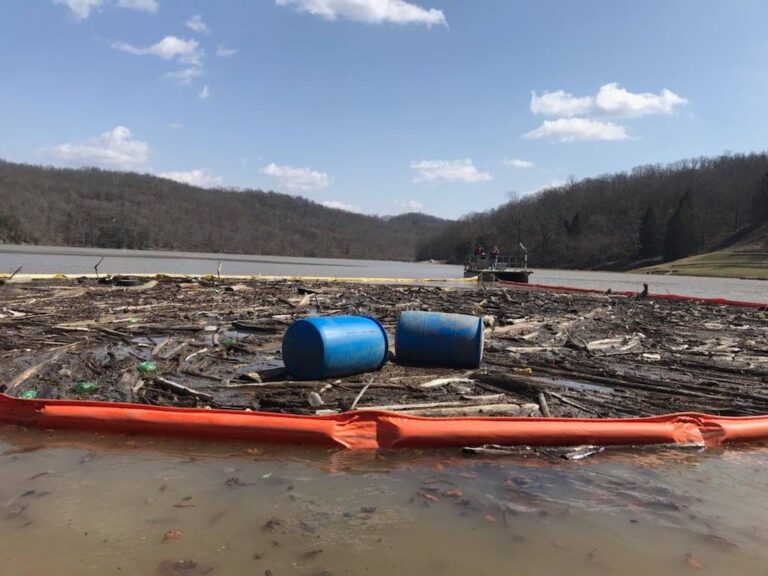 The trip is slow as the booms are dragged along behind a working boat. 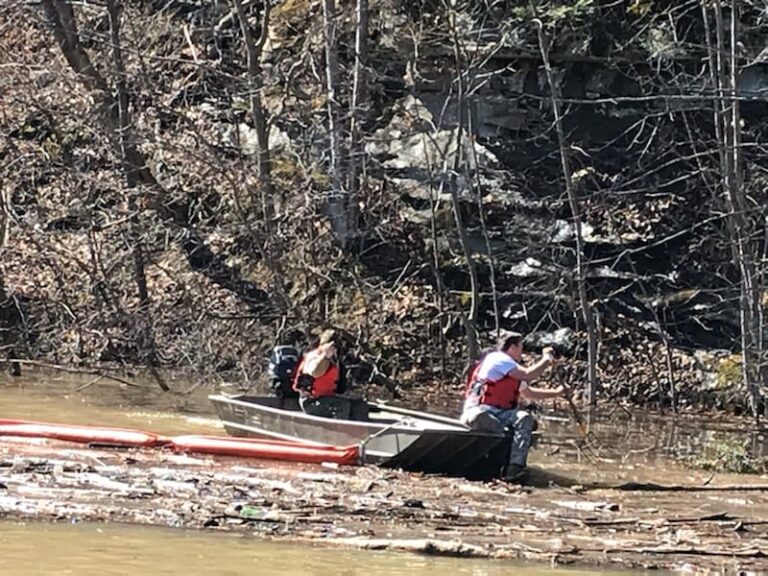 All of the material is gathered with trash booms which eventually encircle the debris on the water. 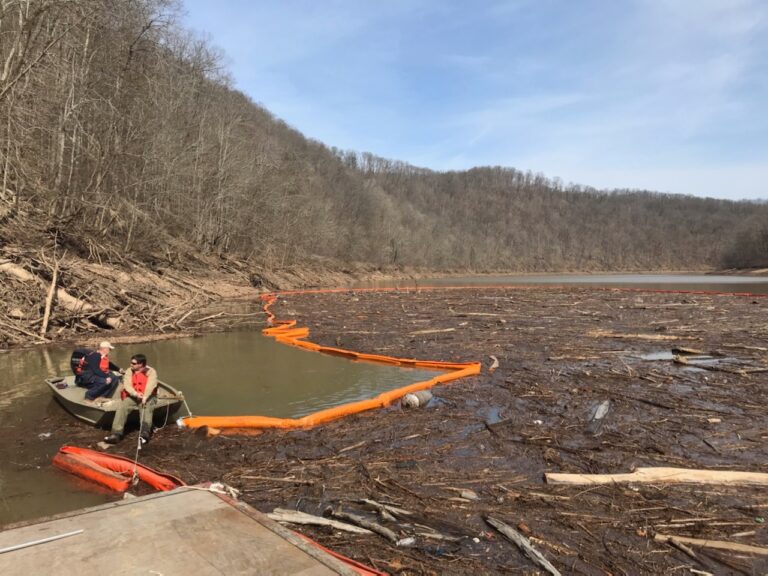 Corps of Engineers workers use Jon boats to corral floating debris on Sutton Lake, preparing to move it to the shore about a mile away.

SUTTON, W.Va. — Two guys in a Jon boat struggled to maneuver through a mine field of logs, limbs, and trash all floating freely amid the water. The team from the U.S. Army Corps of Engineers at Sutton Lake worked to wrangle seven acres of woody debris and trash which accumulated on the water’s surface following the recent flooding.

The situation is nothing new, in fact, it’s common in the early spring for Corps employees to spend time on dealing with drift debris.

“We boom it off with trash barriers. We take two boats, attach it to the bank, and pull it to one of two areas on the lake where we can work it,” said Brandy Accord, Resources Manger for the Sutton Dam operations.

Listen to “Brandy Accord , Sutton Lake Resources Manger” on Spreaker.


According to Accord the term “work it’ isn’t a misnomer, the manual labor is intensive when the material is finally corralled and pulled to the edge of a staging area where heavy equipment can pick the material and remove it from the water.

“There’s raking, throwing, and cutting with a chainsaw. With what we have right now, we’ve probably dedicated a month to getting rid of that,” she explained on Saturday’s edition of West Virginia Outdoors.

Once separated and sized, the material is burned at the waters edge. Already this year, the crews at Sutton have removed a sizeable amount of the debris. The most recent raft came from the flooding rains of late February and early March. The lake’s levels rose into the parking lots of most of the visitors areas like the Bee Run boat launch. However, as the Corps dropped the lake back to winter pool, a large amount of the drift was left on the shore.

Accord explained removal of the drift tis critical to the dam’s operational plans.

“In the past we’ve been directly impacted when our sluice gates had debris in them,” she said.

Divers had to go to the base of the dam and remove logs and other debris to allow the operations to continue.

“It’s a giant priority for us,” Accord said.

The floating debris also creates hazards on the water for recreational users of the lakes if left unchecked.

Although the accumulation at Sutton is estimated at around seven acres, Accord said it could always be worse.

“We haven’t had this amount of drift at Sutton since 2016. But at other lakes in our area, like R.D. Bailey down in Wyoming County, they have over 40 acres of drift they are working,” she said.