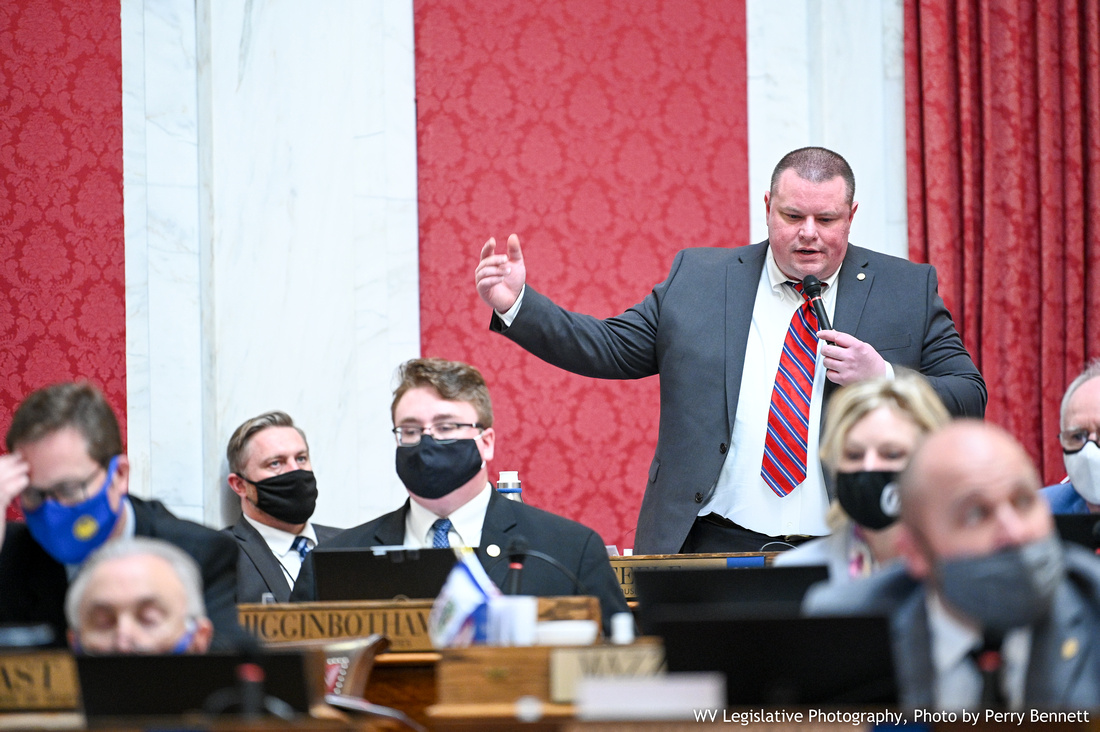 One of the House of Delegates committee chairs, Brandon Steele, has been diagnosed with covid-19. The diagnosis introduces uncertainty to the legislative session as it enters its final stretch.

Steele, R-Raleigh, is chairman of the House Government Organization Committee, which is considered one of the major committees. Reached today by telephone, Steele said he was diagnosed Saturday after feeling unusually fatigued. He later was also diagnosed with pneumonia in one lung. He is recuperating at home and anticipates being out of the Legislature for at least a week.

He said he didn’t have symptoms much of last week, but by Friday got a feeling that he’d interpreted as his allergies acting up.

“It’s a real thing. You can get it. Any one of us can get it. It’s not the end of the world. You take your pills. You quarantine. You go on being an American and kicking ass.”

Today is Day 40 of the 60-day regular session so any absence by the chairman would come during the session’s stretch run. Delegate Geoff Foster, R-Putnam, is the committee’s vice chairman. The next major deadline is Crossover Day, which is the last opportunity for each chamber to pass its own bills out to the other.

Majority Leader Amy Summers, R-Taylor, on Sunday said the House would take additional precautions but did not intend to grind to a halt.

“We have attempted to notify anyone who had the potential of high-risk exposure to this member, which would have meant close contact for more than 15 minutes, and we also want everyone with the House of Delegates to be aware of this positive case,” Summers said in a statement put out by the House.

“Testing with increased capability will be offered at the Capitol beginning Monday,” Summers stated, “with drive-through options available and more details about testing to be shared as soon as they are available.”

Delegates had the option to be vaccinated before the session even began, but not all chose to be. Some close observers suggested the number that opted in for vaccination was about 70 percent. Some legislators and staff were just receiving their second dose last week. Steele acknowledged today that he was among those unvaccinated.

But Steele credited other precautions with allowing the Legislature to get so far into the session without experiencing the effects of the pandemic.

“It’s kind of surprising you get five weeks into a session and this is the first one of us affected,” Steele said today.

“I think it really says something about the plan leadership came up with for operating the Legislature.”

At least one senator, Patrick Martin, a Republican from Lewis County, said on social media Sunday that he had been in close contact with Steele late last week and would isolate as a precaution. “At this time, I am experiencing no symptoms and feel good,” Martin stated.

Delegate Joshua Higginbotham, R-Putnam, wrote on social media that he will also isolate because of his proximity to Steele.

“He and I sit next to each other, often times for hours every day,” wrote Higginbotham, vice-chairman of the House Education Committee. “I am fine at the moment, but I will be voluntarily self-quarantining until I get tested as a way of protecting our staff and other elected officials at the Capitol. I’ll be working remotely for the time being.”

The House of Delegates has set up rules that were meant to be precautions during the session, but treatment of them has loosened up as the session has gone on without any covid issues so far.

Delegates are supposed to wear facial coverings during floor sessions, where 100 delegates gather in close quarters, sometimes for hours at a time. But some delegates have worn mesh facemasks and others have worn no facial covering at all, citing a rule that says they don’t have to if they are eating or drinking. Many delegates make a practice of removing their facial coverings when they rise to speak so they can be heard more clearly.

Committee meetings have been in the House Chamber or in the Government Organization Committee room, which is the largest. That practice has loosened up a bit in the past week, with the Judiciary Committee moving back to its more confined regular space.

“We will be making sort of a game day decision each day,” House Speaker Roger Hanshaw, R-Clay, said in February as the session began.

“We do anticipate working a fairly aggressive agenda early in the session because other states have seen their sessions shut down because of COVID. If we’re shut down we can still have a positive legislative session realizing there may be things left undone.”