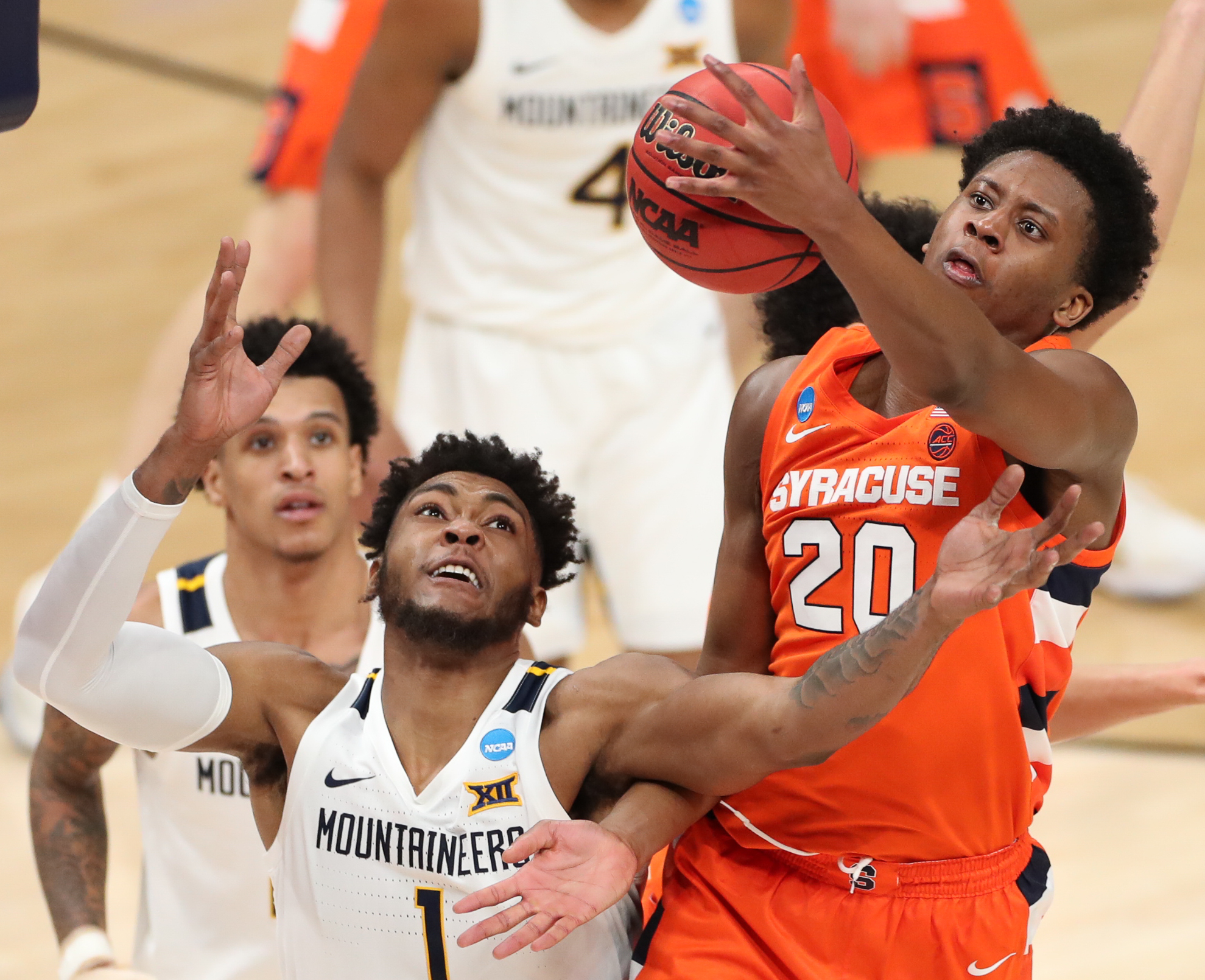 Just over 2 minutes into Sunday’s second-round matchup against Syrcause, West Virginia’s Derek Culver was whistled for an offensive foul while operating against the Orange’s patented 2-3 zone defense.

Already trailing 6-0, it added to the Mountaineers’ slow start, one that put them behind 11-2 early and 24-10 at the halfway point of the opening half.

That sluggish start proved costly in WVU’s 75-72 season-ending loss, but Culver’s charge also marked a sign of things to come — the Mountaineers would struggle mightily inside against the Orange.

Culver, a first-team All-Big 12 Conference selection, was a virtual non-factor against SU and finished with seven points and three rebounds in 21 minutes.

“Quite frankly we couldn’t score it in there,” West Virginia coach Bob Huggins said. “They did a great job gang guarding us when we threw it into whichever guy we threw it to, be it Gabe (Osabuohien) or Derek. They gang guarded him and we didn’t do a very good job of playing inside out. With it, we made bad decisions with the ball with that part of it.”

For Culver, who finished the season with 11 double-doubles and averages of 14.3 points and 9.3 rebounds, it was a disappointing ending in the biggest game of his college career to this point. Culver made 2-of-9 shots and played just 6 second-half minutes, with Huggins electing to play Osabuohien 14 second-half minutes instead.

Although Osabuohien isn’t near the scoring threat Culver is, his play on both ends sparked the Mountaineers. Osabuohien had a game-high nine rebounds in 19 minutes and added three assists to go with his lone basket — a layup in the closing seconds.

“The first half, we played the best defense we’ve played all year long,” Orange coach Jim Boeheim said. “We wanted to stay back on Culver and when he tried to drive to draw the charge. But getting him out of the game probably hurt us because they were much better with their smaller lineup and they really made it hard to defend them. Then they got on the boards big time in the second half.”

Even with Culver totaling his second-lowest rebounding output of the season, West Virginia handled SU on the boards 41-29, including 19-4 on the offensive end. Jalen Bridges equaled Osabuohien with nine rebounds, while Emmitt Matthews Jr. added seven.

That goes to show West Virginia’s biggest advantage against the Orange was inside.

While it wouldn’t be a stretch to say this was Huggins’ best perimeter shooting team at West Virginia, the Orange are just as proficient from the perimeter.

In Buddy Boeheim, Syracuse has one of college basketball’s best shooters, and he’s generally surrounded by no less than three players capable of scoring beyond the arc.

While Boeheim caught fire during a 22-point second half to lead all players with 25, he was essentially matched by Mountaineer guard Sean McNeil, who made seven three-pointers and poured in a team-high 23.

West Virginia’s biggest advantage in the game was its strength inside, with Culver weighing 55 more pounds than SU’s biggest starter Marek Dolezaj. Dolezaj picked up his third foul late in the first half and his fourth foul early into the second, but was never disqualified.

With more production from Culver, he’d have played for longer stretches in the second half and increased the chance of Dolezaj fouling out. With reserve center Jesse Edwards on the court, SU was outscored by 8 points in 7 minutes.

Instead, the Mountaineers made 15-of-44 two-point field goal attempts, including 7-of-25 in the opening half as they failed to find a comfort zone against the 2-3 zone outside of McNeil’s hot hand.

“It took some time for them to jell together and it took some time for them to understand what he was asking them to do,” Huggins said of Syracuse. “You don’t just roll out of bed and play a 2-3 zone the way they do. He’s the best that’s ever coached the 2-3 zone and Syracuse is the best that’s ever played the 2-3 zone. Everybody wants it to happen right now. It doesn’t work like that.”