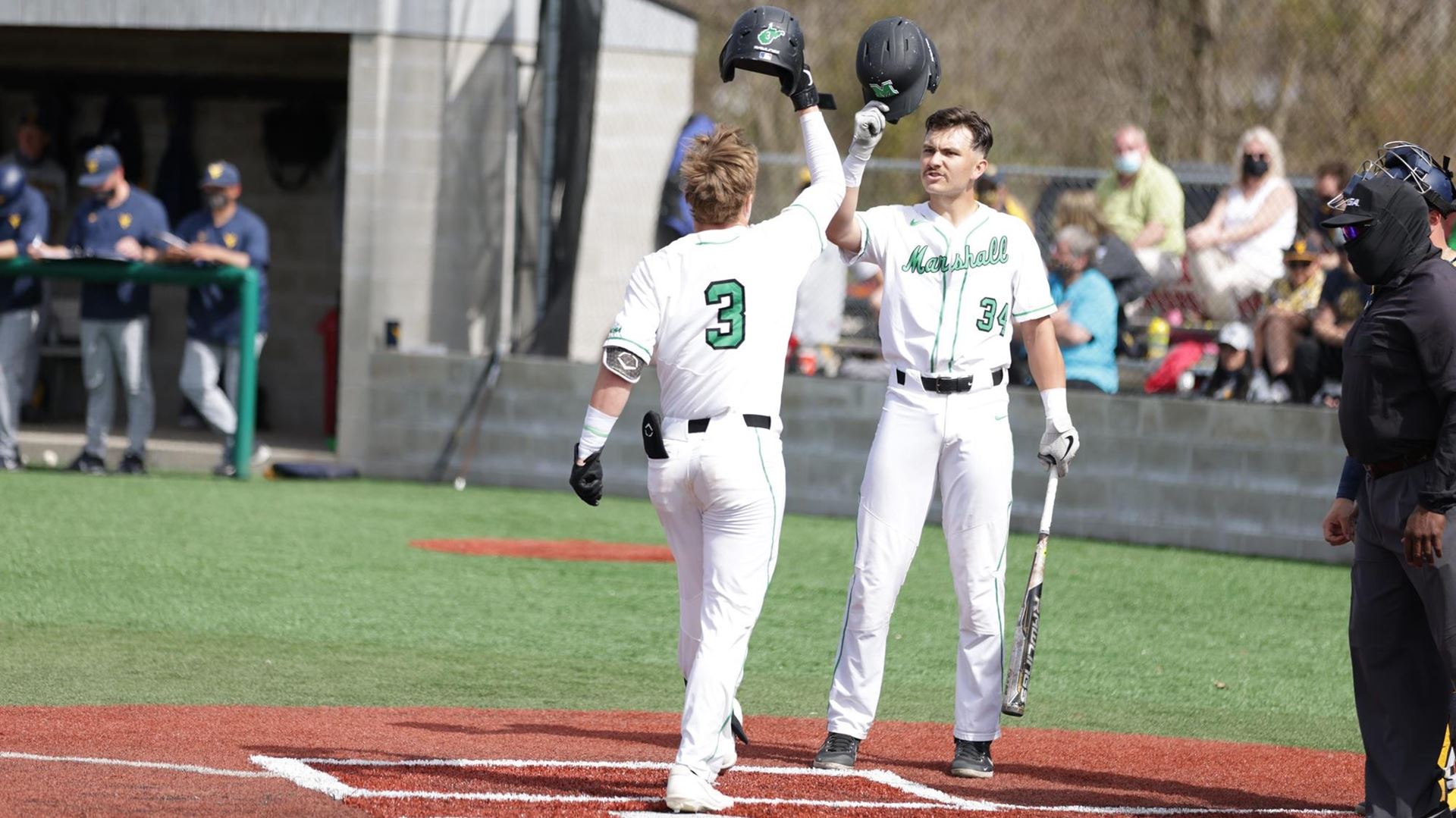 HUNTINGTON, W.Va. — Marshall wasted no time making sure West Virginia’s first visit to Huntington for baseball since April 5, 1988 would not go well.

After a 1-2-3 top of the first by the Mountaineers, the Thundering Herd’s Geordon Blanton led off the home half with a home run to left.

Kyle Schaefer contributed a big three-run homer in the third and Jordan Billups belted a double to right center for the first run in a two-run fourth for a 6-0 lead. Cole Williams delivered an RBI single for the other run.

From there, Marshall got solid pitching from starter Ryan Capuano and the six relievers who limited the Mountaineers to just two hits. All this led to Marshall notching a 7-1 win Tuesday at George T. Smailes Field to end WVU’s winning streak in the series at seven. The Mountaineers had won nine of the last 10.

“Wanted to come out and show we’re not the little brother, we can hang with them,” Schaefer said.

“It’s always exciting to play against them,” said Capuano, who went 3.1 innings of no-hit ball and got the win. “It’s a big game. You love to show you can compete with them.”

“It’s really good to play our in-state rival,” Marshall coach Jeff Waggoner said. “They have a really good team, a really good program. Both teams have had the COVID (Coronavirus) battles. We get all our players back Saturday. It’s the time of year to put it all together. It’s a good win to get the edge going into conference and play a really good FAU team.”

Marshall made it 7-0 in the fifth thanks to aggressive baserunning. Luke Edwards led off with a single, stole second and then scored on a groundout by Travis Sankovich up the first-base line.

That play, combined with the Herd’s early power and work in the field, showed Waggoner something. On defense, in the third Billups ran down a slicing line drive to right by Dominic Ragazzo. In the fifth, third baseman Peter Hutzal dove to his right to snare a hot grounder by Ragazzo, rolled over, came up throwing and got the out at first.

“We played with a little bit of an edge, something we’ve been lacking,” Waggoner said. “The kids came out on fire, they weren’t going to lose. I believe in this team. You’re going to face adversity, the schedule change, COVID. You have to stay positive.

“It’s not WVU, it’s us. Maybe it was the West Virginia thing. They were a fun team to be around today. I hope they understand that and get on a roll and win some games.”

The teams have a rematch scheduled April 14 in Morgantown. COVID-19 issues with WVU caused the March 9 game to be called off.

Matt McCormick got WVU’s first hit in the sixth, a single up the middle off Ayden Hodges. Tyler Doanes beat out an infield single in the eighth to drive in the only run for the Mountaineers. D’Andre Knight retired the Mountaineers in order in the ninth.

Capuano said experience in earlier games against WVU and his fastball helped tremendously.

“I established the fast ball, was able to get ahead in the count,” Capuano said. “That’s what coach told me I needed to work on. This is a great way to go into conference.”

“(Marshall) threw strikes, and they attacked us with their stuff,” WVU assistant coach Steve Sabins said. “We put the ball in play but not with authority. We didn’t have any extra-base hits, and that has really been the story for us in the last few games. We need to have a big knock in the big situation to get a little momentum going.”