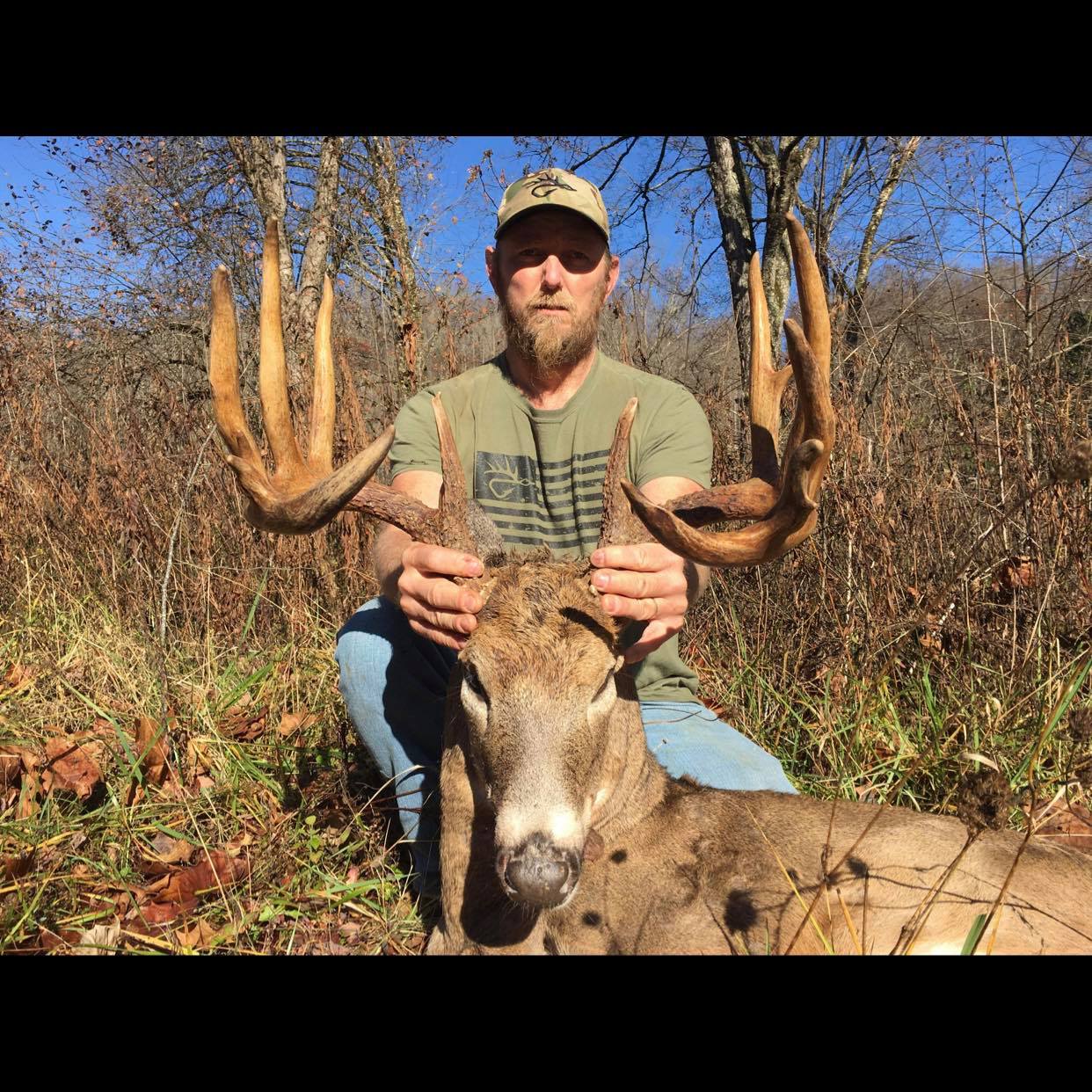 James Greene of Tioga, W.Va. with the monster buck killed on the Monongahela National Forest in Webster County.

WEBSTER COUNTY, W.Va. — Even during the most impassioned and embellished hunting camp stories will seldom talk about the prospects of 180 inch buck killed on the Monongahela National Forest in West Virginia. However, for hunter James Greene of Tioga, W.Va. he can tell such a story from now on with authority and the evidence to back up his words.

Greene shares a hunting lease in Webster County, but one November afternoon last fall he wandered off the private land and onto the nearby National Forest property. He was in search of an eight point buck he had scouted in the early part of the season. He believed the buck he was after had antlers in the range of 140 inches.

“I actually had about five different bucks in that range, but there was one in particular I was after,” he explained on West Virginia Outdoors.

It was a foggy evening on November 30, 2020. Greene was perched 30 feet in the air with his climber stand. He broke the silences of the woods with five deep grunts on his call. Suddenly a doe and fawn appeared to his right. He watched them carefully and thought it was unusual the fawn was in the lead. He heard a grunt and suddenly the original two deer spooked, dashed about 30 yards to his left, and stopped to resume feeding.

A quick glance back at the original pair revealed they were staring straight toward him and caused Greene to realize, the moment of truth had arrived.

“I heard him grunt again and the first time I saw him, was through the platform of my stand. He was standing right under me,” he said.

Greene carefully stood, drew back his bow set at 80 pounds, and held for a shot which was nearly straight down.

“He wasn’t directly under me, I guess he was three feet away from me at 30 feet down. I was going to spine him or get a heart shot,” he explained.

The shot struck its mark, but the buck–which at this point Greene knew only had a nice set of antlers–simply walked away. He didn’t jump and run, he just walked calmly off into the mist and out of sight.

An hour later, Green explained he climbed out of his stand, went to his vehicle, and drove to a spot with cell service to tell his friends about the encounter. He didn’t want to track it for fear he might spook the animal before it died. But there was another reason he wanted to get help, Greene is color blind.

“That’s one reason I didn’t want to track him, I can’t see blood. It doesn’t matter how much he bleeds, I can’t see it,” he explained.

The next day, Greene returned with two friends and his son. They immediately noticed a solid blood trail from the point he shot the buck. Within minutes they had located the animal just over the hill at about 80 yards. The rack was amazing.

“They freaked out and were happy for me,” he said.

Listen to “James Greene on West Virginia Outdoors” on Spreaker.

They freaked out with good reason. After the appropriate drying period, an official score from Boone and Crocket showed the gross score at 186 2/8ths and the net score after deductions put it officially at 176 1/8th. It was the biggest buck Greene had ever killed and the biggest he had ever heard of in that part of West Virginia. Greene was unaware of the buck and had no trail cam pictures of him. He later realized he had seen the buck on camera two years earlier and when word of his b\uck spread, several more admitted they had been watching the buck on their trail cams.

“The last trail cam picture anybody had of him was five miles away from where I killed him,” Green explained.

The achievement was electrifying and even four months later hasn’t truly set in.

“I still can’t believe it now. I keep saying to myself, ‘I killed a 180 inch deer.’ On one hand that’s awesome, it’s what I hunted all my life for, but on the other hand, I’ll probably never top it,” he said.

“I’ve wondered do I even need to hunt anymore,” he laughed, “But I love to hunt so much, I’ll be back. I’ll find another one.”

Outdoors
Archery hunting season opening up in West Virginia
Bow season is one of the most anticipated hunting periods of the years in West Virginia, the early opening gives hunters a chance to concentrate on eating habits rather than breeding.
By Chris Lawrence
Outdoors
Natural Resources Police step up patrols on East Lynn WMA
Those riding illegally on the property are being written warning citations.....for now.
By Chris Lawrence
Outdoors
National ammo shortage continues despite increased production
Firearms industry says the cause of ammo shortage is complex, multi-faceted, and probably not for the reasons you think.
By Chris Lawrence
Outdoors
Urban hunts get started in towns big and small across W.Va.
City leaders have learned a partnership with the DNR for an urban hunt can be the answer when deer damage complaints are mounting.
By Chris Lawrence
View AllHoppy's Commentary