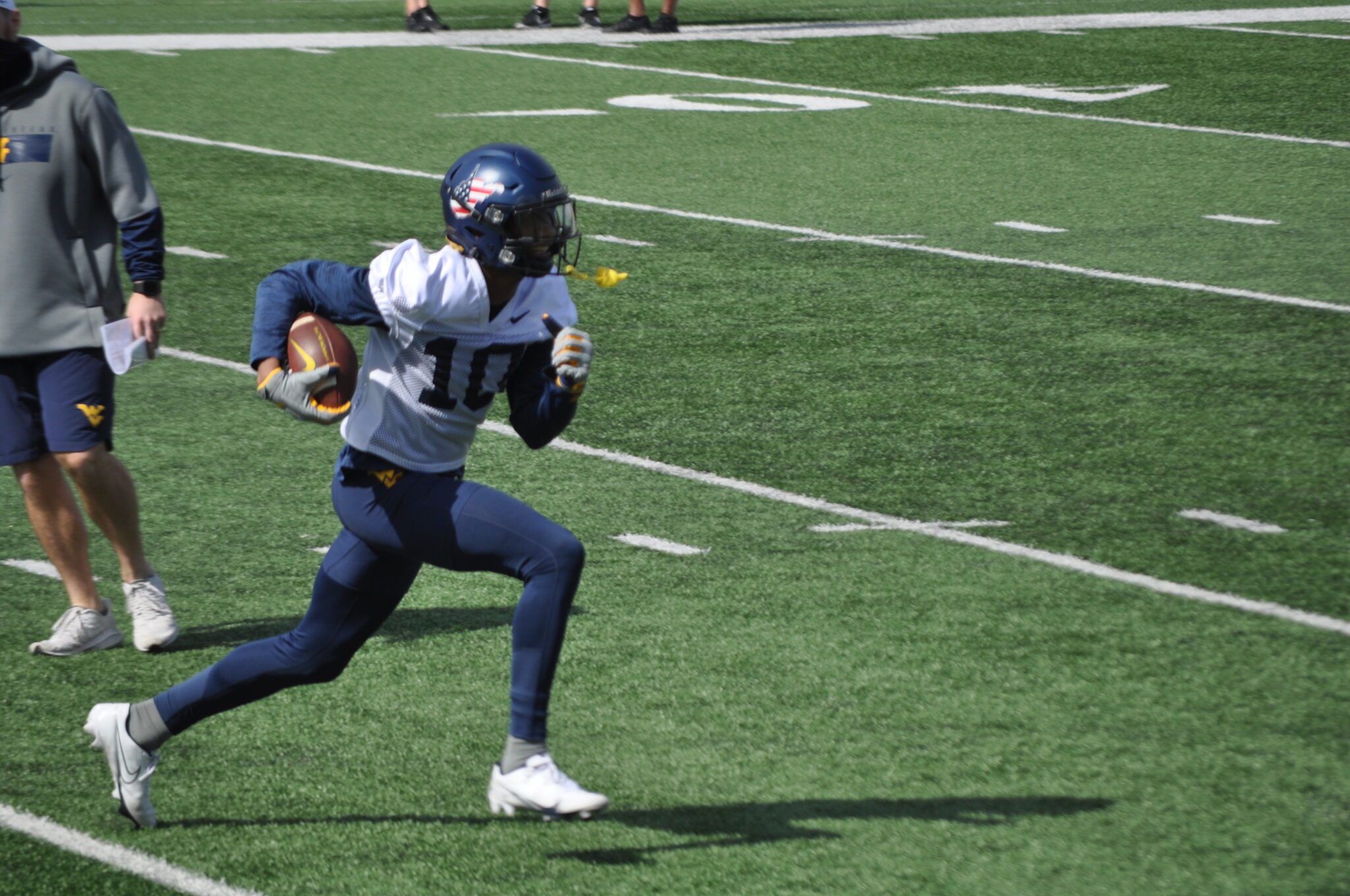 MORGANTOWN, W.Va. — After a 2020 season in which West Virginia was plagued greatly by dropped passes, displaying improvement in that area is a focal point as the Mountaineers continue spring practice.

Monday marked West Virginia’s third practice and first in pads, and a familiar cast of characters are looking to help provide a spark to the team’s passing attack.

“They know improvement needs to be made in a lot of different areas and they’re embracing it,” WVU offensive coordinator Gerad Parker said. “Veteran guys are becoming veteran guys, meaning we actually have leadership. Some guys are really trying to take it forward and being able to respond to negative results as well as positive, so that part has been really good from our vets.”

Wideout T.J. Simmons is the only Mountaineer no longer around who caught 10 or more passes last season. Returning wide receivers Winston Wright, Bryce Ford-Wheaton, Sam James and Sean Ryan each caught between 25 and 47 passes in 2020. Fellow receivers Isaiah Esdale and Reese Smith had 12 and 11 grabs, respectively, and return.

“Those guys have had great winters,” head coach Neal Brown said. “Winston Wright looks signficantly different. Bryce Wheaton, Sam James look significantly different than they did when you saw them after the bowl game. Sean Ryan the same. We have talent in that room. It’s not a talent issue. We have to be more consistent.”

Adding strength should help win one-on-one battles with defensive backs or spring Brown with blocks on the edge, but how can Brown be more confident the group will lower its drop rate?

“I don’t know if you’re confident until you go out there and do it in a game setting,” Brown said. “The main challenge for us is we have to do a better job controlling our emotions. Our response when things do go poorly, we have to be better. We can’t let one mistake or dropped pass affect another play.”

Of the more productive returning wideouts, only Ryan and Esdale are seniors.

“A lot of those guys were pressed into playing before they were probably physically ready and sometimes that’s good and sometimes it’s not,” Brown said. “They put a lot of work on catching the ball over the break, but until they get into the fall and we do it in the games, probably shouldn’t forecast.”

The coaching staff also has high hopes for a pair of inexperienced wideouts in true freshman Kaden Prather and redshirt freshman Devell Washington.

Prather, at 6-foot-4 and 200 pounds, was perhaps the most decorated player of the team’s recruiting class and should benefit from spring practice after enrolling early.

“He’s really conscientous and works,” Parker said. “He’s made some plays early in the spring, which always helps. Of course it’s always going to be a learning curve with an offense that’s much different than what he’s used to and the pace of practice and all those things, but he’s taking on to the learning real well.”

Like Prather, Washington doesn’t lack size. At 6-4, 210, the Saginaw, Michigan native could become a contributor.

“This is the first real spring for Devell Washington and he’s really embracing learning,” Parker said. “He still has to take some steps in that department, but he’s a really good, strong kid that’s worked really hard in the weight room. His body looks so much better.”