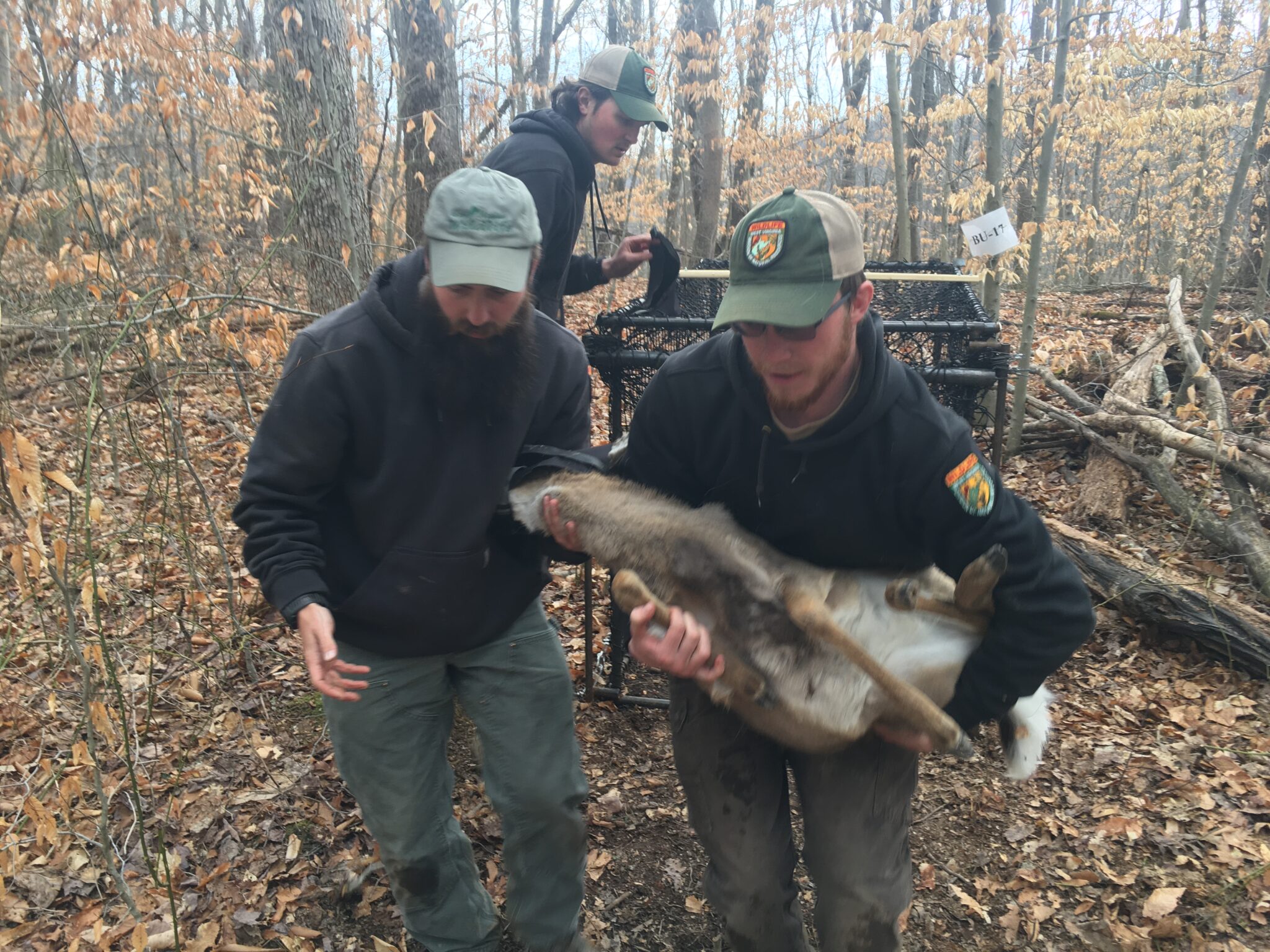 BUCKHANNON, W.Va. — After trekking across a 100 yard open field, three employees of the West Virginia Division of Natural Resources slipped off their backpacks filled with gear. Assistant Whitetail Deer Project Leader Brett Skelly held an orange PVC pipe capped on either end and referred to as “the football.” The three bumped fists and immediately broke into a sprint over the nearby hill to where a “clover” trap was set up to capture a deer.

“We rush in because if there’s a deer in the trap, they’re going to start going nuts and we want to get them down and under control before they can hurt themselves,” Skelly explained.

The traps, which are literally triggered by a rat trap mechanism, are manually collapsed onto the animal while one person holds it steady. Skelly opens the football which holds the syringe and gives the deer an injection to put it to sleep temporarily to begin the work up.

The trapping program is part of a three year whitetail deer study launched by Skelly and his team in three different areas of the Mountain State designed specifically to learn more about deer movement and mortality.

“We’re primarily looking at survival and cause-specific mortality on deer here in West Virginia. We’re trying to get a grasp on what those look like across the state. We’re also looking at home range, habitat selection, and a lot of really cool information like that, ” Skelly explained.

Although pursuing whitetail deer is the most popular hunting in North America, there are still many things we don’t know. Skelly said particularly in West Virginia there has never been a study this comprehensive. The only other tracking study using animals tagged and radio collared was done in the early 2000’s on a small scale in Randolph County. This project is exponentially bigger. The study is actually being done in three areas; one in Barbour-Upshur County, one in Mason-Jackson County, and one in Hampshire County.

“We’re going to learn a lot of things about how these animals move during different times of the year. We’ll probably be really surprised and learn a lot of interesting things we never thought they would actually do,” he explained.

The goal, according to Skelly, is to put collars on about 120 animals in each of the study areas. He’d like to make the buck-doe ratio about 50/50 and so far that’s about where they’ve been able to keep it. The first captures were made in February and are wrapping up for the season. The green-up of the forest and fields made the bait less attractive for the deer to fall for the traps. They hope to a

dd more deer to the study in the next two winters and track their movements.

“It’s a three year study for capture and a little longer for gathering collar data,” he explained.

The collars, which have a GPS transmitter, report a location to Skelly’s software periodically throughout the day. The signals will allow deer movement to be consistently tracked and plotted over the course of three years and enable biologists to see patterns of travel at certain times of the year. Skelly and his team will be able to evaluate the impact of mast on movement and possibly just how far ranging bucks will become during the rutting period.

“The unique part of this study is it’s all on private land. These are all folks we’ve contacted who allowed us to come out and trap on their land. We’ve got none of this on public land, so I think we’ll get a really true picture of what is actually happening to these deer on the landscape with all of the different land owner practices and hunting traditions landowners practice on their property,” he explained.

The study is also aimed at getting a better gauge on mortality as well. Whether killed by a hunter, a vehicle, or some other means all of the data will be an important component of making future deer management decisions in West Virginia.

Each deer captured, in addition to the GPS tracking collar, is also outfitted with metal tags in each ear to identify them with an identification number. The metal tag also includes a phone number to call the DNR if the animal is found dead or taken by a hunter. Each of the deer is aged and a blood sample pulled along with a DNA sample which will be used in another study on genetics being conducted by researchers at West Virginia University. Skelly added he doesn’t want the collar to be an impediment to hunters.

“We don’t want the collar to influence anyone’s decision to pull the trigger or not. If they see a collar, it shouldn’t affect their decision. It’s still a legal animal as long as it’s during hunting season and within all of the legal frameworks already in place,” he said.

While they don’t mind you harvesting the collared deer this fall, they do want the collar back. Just give them a call or drop it off at your local DNR office.