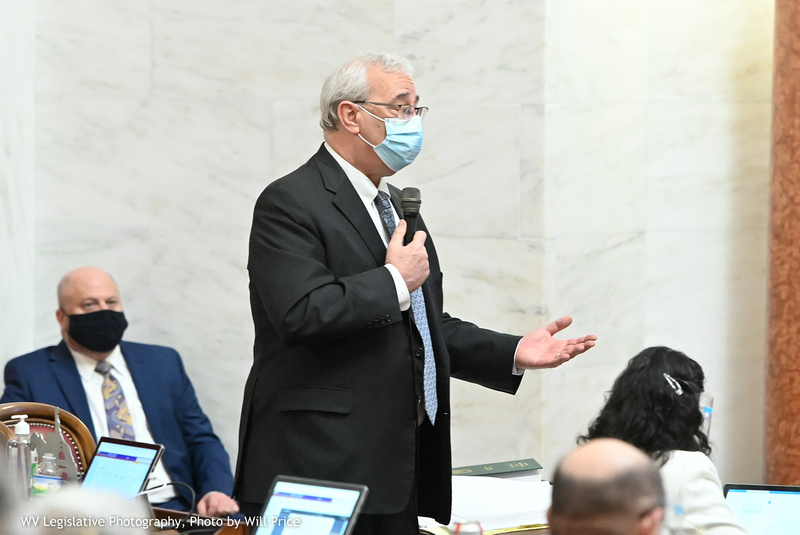 The state Senate believes half the intermediate court it had envisioned is better than none.

Senators concurred today to House changes to a bill establishing the midlevel court. The bill now goes to Gov. Jim Justice, who expressed support for the intermediate court in his annual State of the State address.

“Tonight I also want to strongly support and hope like crazy it gets in through this year is an intermediate Court of Appeals,” Justice, a Republican, said during his address.

The state Senate has passed versions of the intermediate court for several years in a row. The concept has often washed ashore in the House, including last year.

This year, the House of Delegates trimmed the districts of the court from two to just one. And the number of judges were cut from six to three.

But that was enough for most senators to want to get started.

Senator Mike Romano, D-Harrison, has argued against the intermediate court over the years, saying it’s unnecessary. Today, Romano said the reduced resources for the court under the House version makes it more likely the court will be a bottleneck to complicate resolving cases.

“I continue to oppose this bill, and its current form just demonstrates how we’re playing with fire. Here we’ve taken six intermediate court judges and made them three, gone from two divisions to one,” Romano said.

“We’re creating a clear bottleneck that we warned of when we had the two divisions — and adding 12 to 18 months to every case.”

The West Virginia Appellate Reorganization Act would establish an intermediate court to review civil cases between the circuit court and Supreme Court levels. It would also review issues such as workers compensation cases and final orders from family court.

The three judges on the intermediate court would receive appointments to staggered terms to fill out the court at first, with regular elections for 10-year terms after that. The judges would make $142,000 a year. Proceedings are anticipated to take place in already-available public buildings.

A big change is that the Senate had envisioned two districts, north and south. The House version has only one district that covers the whole state.

The estimated cost to establish the intermediate court for 2023 was almost $7.9 million for the Senate bill. The House bill trims that to an estimated $3.6 million.

Every year after that, Senate version would be about $5.7 million. The bill under consideration by the House would have an estimated continuing cost of $2.1 million.

And the Senate bill had judges serving 12-year terms. The House bill trims that to 10-year terms.

During debate this week in the House, Delegate Barry Bruce, R-Greenbrier, said he had assessed the House bill as a long-practicing lawyer. He said he liked the Senate version and its two panels, but he doesn’t think the House version is adequate.

“There’s no way three judges can hear the caseload that’s going to be presented,” Bruce said.

Attorney Danielle Waltz, who has been lobbying for the intermediate court on behalf of the U.S. Chamber of Commerce, expressed appreciation for the Senate’s sign-off on the bill.

“Thank you to the Senate for its bipartisan support for creating an intermediate court,” Waltz said.

“This is an issue that’s been discussed in West Virginia for more than a decade, and I’m pleased that it’s gotten across the finish line. This is a big win for West Virginia and allows it to join the vast majority of states.”