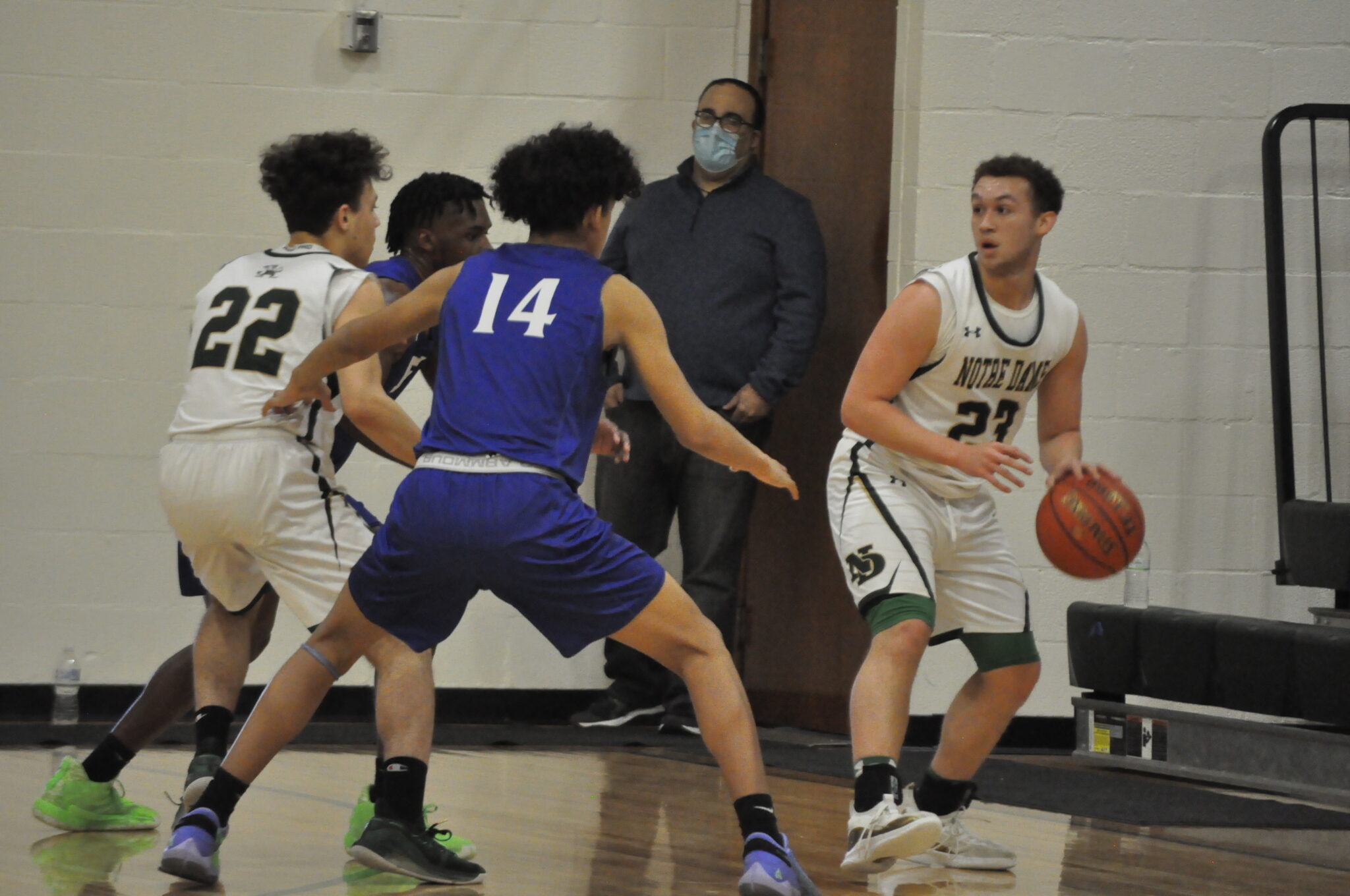 CLARKSBURG, W.Va. — With seemingly no answer for Notre Dame point guard Jaidyn West, Fairmont Senior entered the fourth quarter of Saturday’s game with its backs against the wall and its unbeaten season on the line.

Facing a six-point deficit, the Polar Bears needed to first figure out how to slow West, then produce enough offense to mount a comeback. Fairmont Senior found a way to do both, holding the Irish without a fourth-quarter field goal until 13 seconds remained, at which time the outcome had all but been decided in the Polar Bears’ 64-59 victory at Angelo Basile Court.

“We were forunate to make some really good plays. We feed so much, talk so much and work so much defensively, that’s where the game starts with us,” FSHS coach David Retton said.

Freshman guard Zycheus Dobbs had a stellar performance and saved his best for when it mattered most. Dobbs, who led the Polar Bears with 22 points, made two free throws and a three-pointer to start the scoring in the fourth.

Dobbs’ leaner with 3:35 to play gave Fairmont Senior (11-0) its first lead of the second half, 54-53 with 3:35 remaining. Joseph Uram followed with a turnaround jump shot and after Jaelin Johnson scored inside, the Polar Beard held a five-point lead.

West’s leaner with 13 seconds remaining cut the Notre Dame (3-4) deficit to 62-57 and marked the first fourth-quarter basket for the Irish. West scored all eight of his team’s points in the final period.

“They tightened the screws on us,” Notre Dame coach Jarrod West said. “For the most part, we competed real well defensively, with rebounding and 50-50 balls, which when we do that, we’ll have a chance to win. When we lose, it’s normally because we got bullied. I didn’t think we lost because we got bullied, but in the fourth quarter, we weren’t able to execute because they closed the space and laid some lumber on us.”

The Polar Bears built an early 10-4 lead on the strength of consecutive triples from Bryson Flowers and Dobbs, but the Irish countered with threes from West and Elijah Goodman to go on top 17-16 after one quarter.

Wade Britton scored inside twice early in the second quarter to help the Irish up their lead to four, and West made a trio of three-pointers over the remainder of the half that allowed Notre Dame to enter halftime leading 35-31.

“He’s a heck of a player. He is a scorer, a distributor and an all-around player,” Retton said of West. “Our guys stayed the course.”

West, who scored 14 of his game-high 33 points in the opening half, took over in the third quarter. He hit three three-pointers in the first 2:45 of the period, the last of which allowed the Irish to lead 44-37. The junior point guard converted a layup for the final points of the quarter to give him 25 for the contest and the Irish a six-point lead entering the fourth.

Outside of West, the Irish scored only five second-half points. Britton and Goodman finished with 10 and eight points, respectively, but neither scored after halftime.

“We can’t win if we have to rely on Jaidyn being Superman,” coach West said.

Dobbs made 7-of-9 shots and all five of his free throws. He scored nine points in the fourth quarter, surpassing the Irish’s total by one. Johnson added 15 points and six rebounds, while Flowers scored 11 in the win.

“We had a great fourth quarter,” Retton said. “These guys maintain their composure extremely well.”