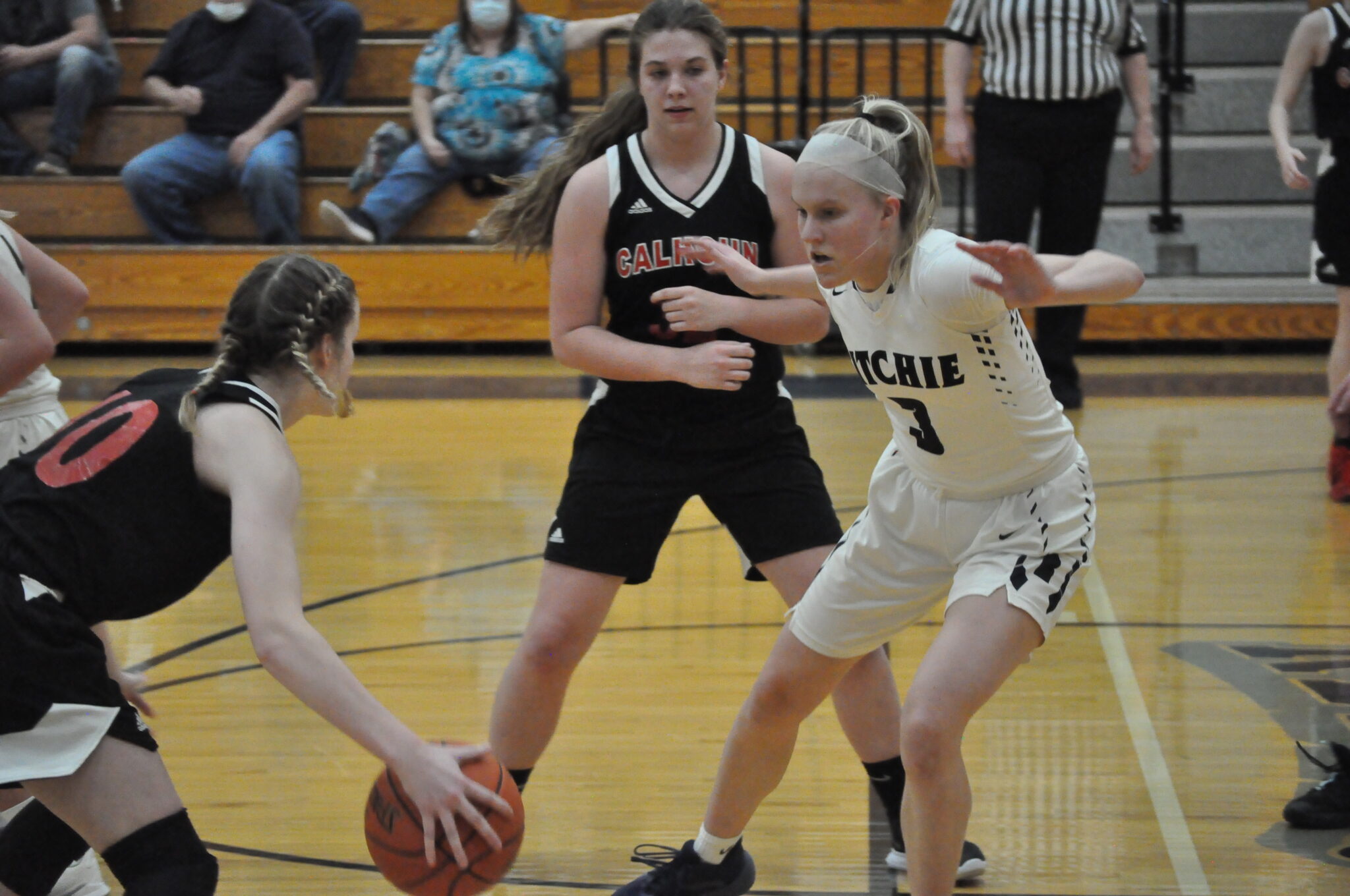 ELLENBORO, W.Va. — After a sluggish third quarter led to Ritchie County falling behind Calhoun County early in the fourth quarter, the Rebels were in need of a spark down the stretch Monday.

They found one in the form of reserve Maci Ireland, who broke a 36-all tie with a basket, then sank two free throws late that made a major difference in the Rebels’ 45-43 victory over the Red Devils.

“This was a big night for her,” Ritchie coach David McCullough said. “She came off the bench and got the most minutes she’s probably had all year. We have another girl that’s been hurt and I thought we’d need her tonight with their size inside. She came up big for us.”

The win allowed Ritchie (10-4) to a complete a regular season sweep of Calhoun, which fell to 10-4.

After Ireland’s layup with just inside of 5 minutes to play, the Rebels led the rest of the way. Still, Calhoun was squarely in it throughout the late stages, and after two Savannah Cunningham free throws, Ritchie’s lead was 42-40 with 56 seconds left.

Soffi Bee then split two foul shots, but Josie Montgomery converted a leaner to cut the Red Devils’ deficit to a point with 23 seconds to play.

But Ireland calmly answered with the two free throws to give her team a three-point lead ahead of Calhoun’s final possession.

The Red Devils had two looks to tie, but both Montgomery three-pointers were off the mark. She rebounded her miss on the second attempt and was fouled with 0.9 seconds left, before making the first and intentionally missing the second. Unfortunately for the Red Devils, the miss didn’t draw iron, allowing Ritchie to throw an inbound pass that ran off the remaining time.

“We got the looks that we wanted,” Calhoun coach Kevin Boak said. “They just didn’t fall.”

The Rebels dominated the rebounding battle in the opening half, holding a 26-12 advantage through two quarters. That, combined with four threes from Sophia Nelson, played a large part in Ritchie holding a 30-21 halftime lead.

Calhoun was able to stay within striking distance in large part because it made 11-of-17 free throws in the opening half.

“We couldn’t rebound with them, so we decided we were going to drive the lane every time and get some free throws,” Boak said. “Ultimately, it kept us in the game and it was a good, close game, but I wish we’d have driven the lane a little bit more.”

In the third quarter, the Red Devils held the Rebels scoreless for nearly the first 7 minutes and used an 11-0 run to take a 32-30 lead. Cunningham scored six points during the surge, which was capped by a conventional three-point play from Kaylin Parsons that gave Calhoun the two-point edge with 1:22 left in the period.

Sydney Kopshina’s stickback marked Ritchie’s first points of the second half, and the Rebels got a key steal and layup from Nelson just before the third-quarter buzzer to go into the fourth with a 34-33 lead.

Montgomery’s triple early in the fourth put Calhoun back in front, but Rebekah Rupert scored inside to tie it, and the Rebels never trailed again.

“We need to play tougher opposition all year long to get ready for a tournament run,” McCullough said. “If you really want to get to the state tournament, that’s what it’s going to take.”

Cunningham led all players with 19 points, while Montgomery added 12. The Red Devils held a 19-10 rebounding advantage in the second half.

“We knew Savannah and Josie were going to score for them, so if we went to a man like we did most of tonight, it helped take the other three out of the game a little bit,” McCullough said. “That was our game plan in the beginning until we got into foul trouble.”