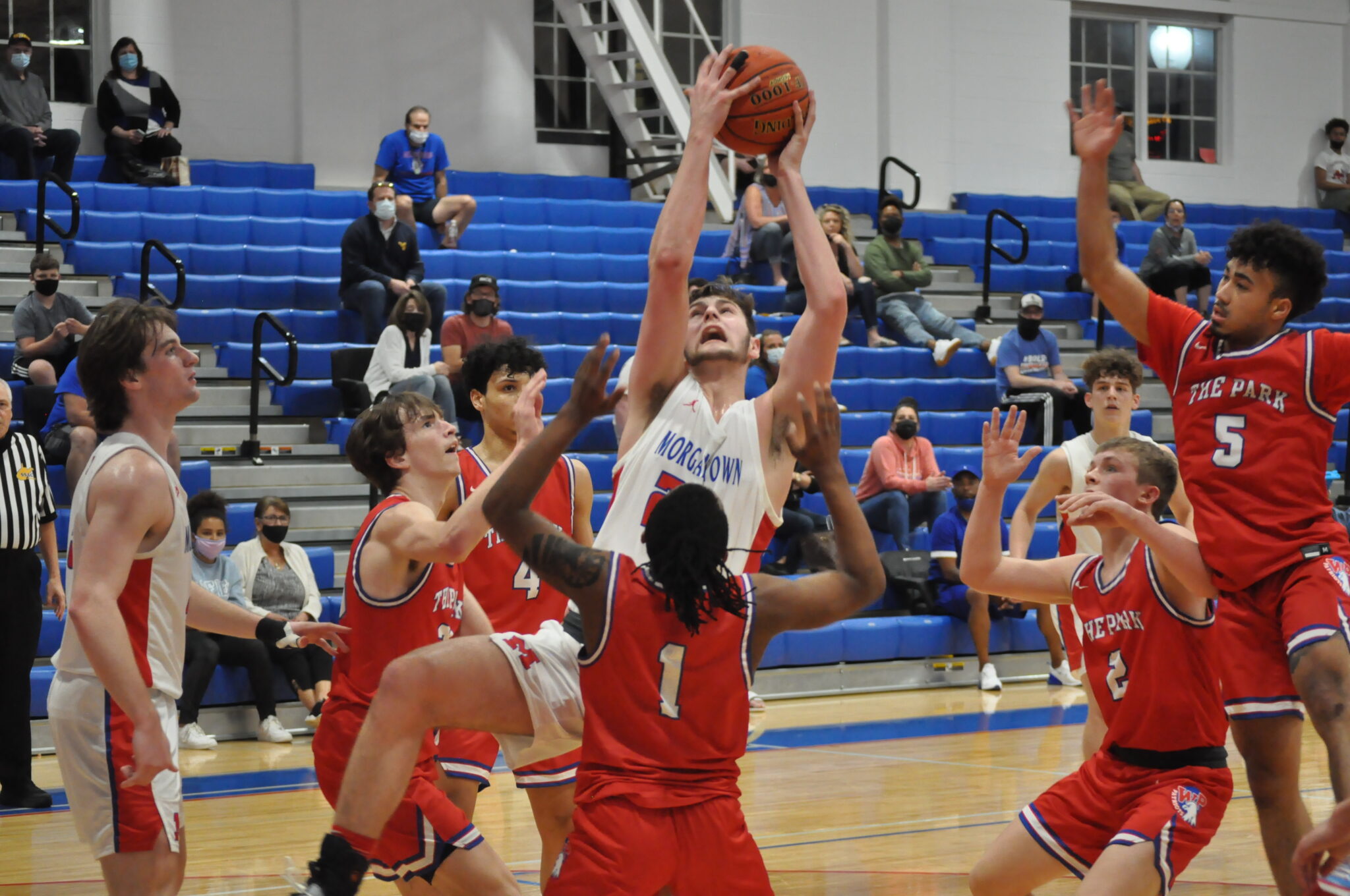 Morgantown's Carson Poffenberger comes down with a rebound while surrounded by several Wheeling Park players. Photo by Greg Carey/WVMetroNews.com

MORGANTOWN, W.Va. — Not much had gone Brooks Gage’s way for the first 30 minutes of Tuesday’s game between Morgantown and Wheeling Park.

A proficient perimeter shooter, Gage had missed all eight of his field goal attempts when Morgantown was in possession with the game tied at 51.

Yet when Gage found himself with room on the left wing, there was no hesitation from the junior guard, who drained a critical three-pointer with 1:08 left that helped lift Morgantown to a 58-52 victory over the Patriots.

“I never lost faith in our guys. I figured we were going to make one eventually,” MHS coach David Tallman said. “We shoot it pretty well and we made a nice pass and got him open and he does what he does. He made a big shot. We’re not thrilled with the way we played, but I am happy our guys found a way to come back and win.”

When Wheeling Park (7-4) got the ball back down three, DJ Saunders missed a jump shot, and Gage followed with two free throws to give his team a five-point lead with 34 seconds left.

With Morgantown leading by four, Carson Poffenberger made a pair of foul shots with 15 seconds remaining to seal the verdict.

“They’re a good team. They’re No. 1; there’s no doubt about it,” Park coach Michael Jebbia said. “But our guys fought tooth and nail. We don’t have the same size that a normal Wheeling Park team does, but we have footspeed, quickness and good athletes. We try to utilize that. Hopefully we get another chance to play them in the sectional final when that rolls around, which actually isn’t far away.”

After closing the third quarter with a 7-2 spurt to cut what had been a 40-30 Morgantown lead in half, the Patriots carried their momentum into the fourth.

Park’s Brett Phillips accounted for back-to-back field goals, the second of which resulted in a conventional three-point play to tie the game at 44 with 5:20 left.

Saunders scored inside moments later to give the Patriots their first lead since 3-0.

“I give Wheeling Park all the credit. Their kids played hard,” Tallman said. “Their coaches did a better job than our coaches tonight. We knew they were going to come out and and try to play some stall ball and keep the numbers low. I didn’t think we handled adversity well at all. Our guys kind of lost their minds a little bit.”

Poland answered with a jumper to tie it, which marked the start of Morgantown’s 9-1 game-ending run.

Morgantown answered an early Beau Heller triple with 11 straight points and led 19-10 after one quarter.

“Even when we got down nine, ten and eleven there, we didn’t veer from the game plan,” Jebbia said. “We stuck with it and kept clawing back. Poland and Gage are good shooters. They missed a couple, but then hit key shots and that’s a credit to them.”

The Mohigans used a 7-0 second-quarter surge to turn a five-point lead into a 26-14 advantage, before settling for a 31-23 halftime lead. The 6-7 Poffenberger scored half of his game-high 22 points in the opening half, while making 5-of-6 field goals.

For the game, Poffenberger shot 8-for-9 and added five rebounds and three assists.

“He had 22 and honestly if we would’ve thrown him the ball, he could’ve had 42,” Tallman said.

Avery Lee led Park with 15 points, 11 of which he scored in the first half. Heller added 12 points, while Saunders finished with nine points, eight assists and seven rebounds.

The win gave Morgantown a regular season sweep of Wheeling Park after the Mohigans claimed the first meeting, 64-47.