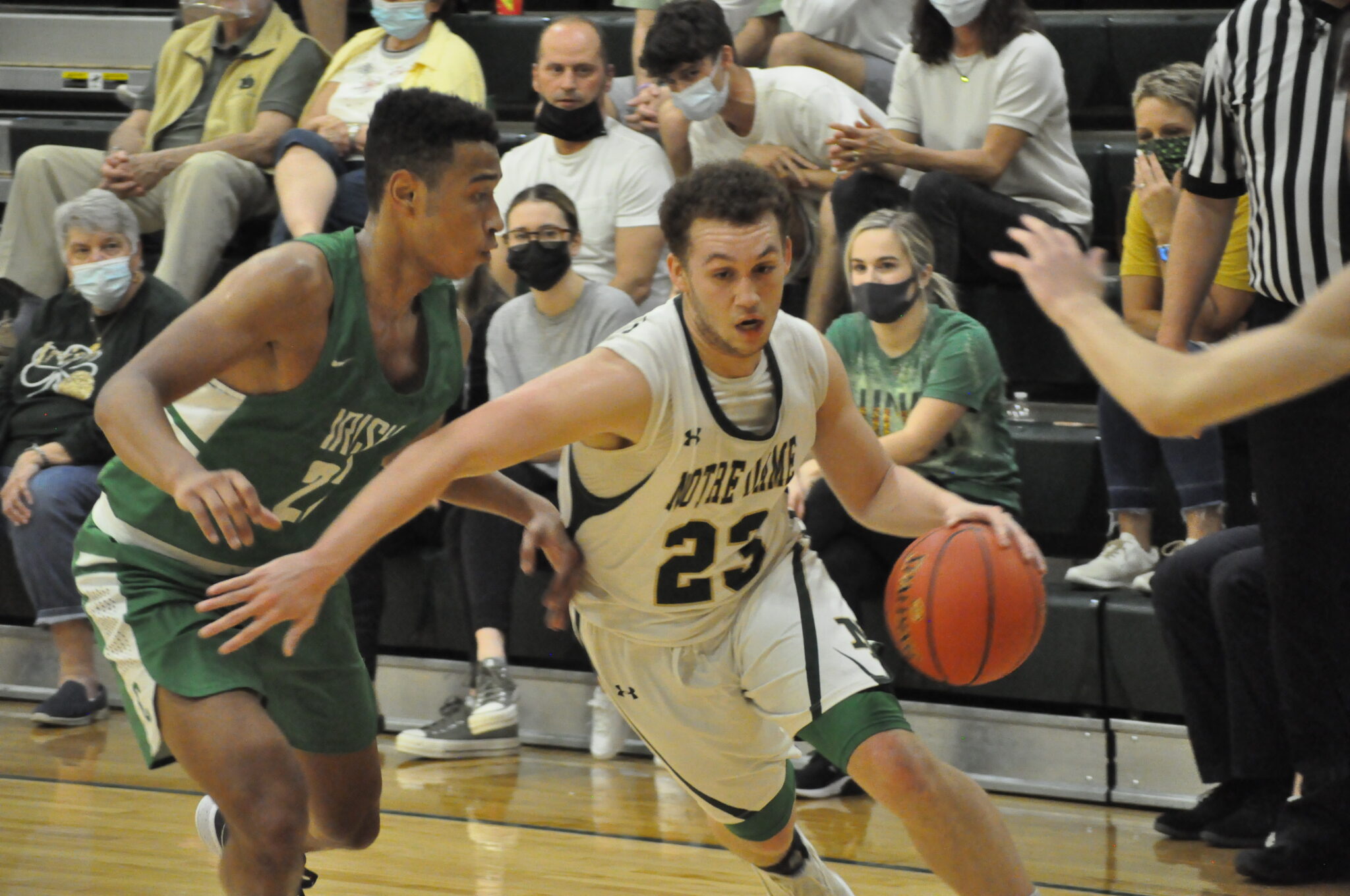 So, too, were the Irish, who hounded West nearly every time he got beyond midcourt and used a strong defensive effort to prevent Notre Dame from surpassing 12 points in any quarter while claiming a 58-42 victory.

West, who entered with 76 points over his previous two games against Fairmont Senior and Poca, was held to 13. Keyed by the defense of point guard Zion Suddeth, Charleston Catholic (8-2) often double-teamed West when he got into the frontcourt.

“Very impressive performance by Zion Suddeth. He took the main role of guarding Jaidyn tonight, battled foul trouble and still did a great job,” Moles said. “Jaidyn West is one of the best we have in West Virginia.”

But NDHS got no closer than the halftime margin, and instead CCHS began to create separation early in the third quarter. Six-foot-6 senior Aiden Satterfield hit a pair of jump shots and when freshman Jayallen Turner accounted for a conventional three-point play at the 5:29 mark of the quarter, Charleston Catholic had upped its advantage to 30-20.

Turner connected on a three-pointer just 34 seconds later, and Satterfield followed with his first of three second-half dunks to stretch the lead to 35-22.

“We need a heart transplant,” ND coach Jarrod West said. “Depending on the night, you don’t know what you’re getting.”

West had his best stretch of the contest late in the third and early into the fourth, hitting two triples to cut the Notre Dame deficit to 40-30 and adding another three 10 seconds into the fourth to make it a seven-point game.

Although Notre Dame’s deficit was still seven with 4:46 left, Charleston Catholic held the Irish to one field goal over the final 5:20. That came on Dominic Zummo’s tip-in that brought ND to within 47-40, but Satterfield responded with a dunk and Suddeth converted a layup off a steal to all but seal the outcome.

“They punked us and it’s as simple as that. If we get bullied, we’re not very good,” coach West said. “They kicked our butt. I felt it in the second half. We’re just not mentally tough enough. We don’t have that guy that can get a stop or dive and get a loose ball to get the crowd pumped up. They have three or four kids doing that. When our defense didn’t turn them over, we were two steps slow on rotations. I could’ve had three steals from the bench.”

Satterfield led all players with 18 points, while Turner scored 17. The duo combined for 23 second-half points — one fewer than the entire ND team.

“We knew Jayallen could do that. He’s only a freshman and he’s still getting involved in the game and he just played free and attacked tonight,” Moles said. “He’s going to get so good over the next four years.”

CC guard Anthony Minardi scored all seven of his points over the final 10 minutes in the win.

“Rebounding and holding them to one was a big key to the game,” Moles said. “We’re not the biggest team this year, but our guys really work and they’re focused at it.”