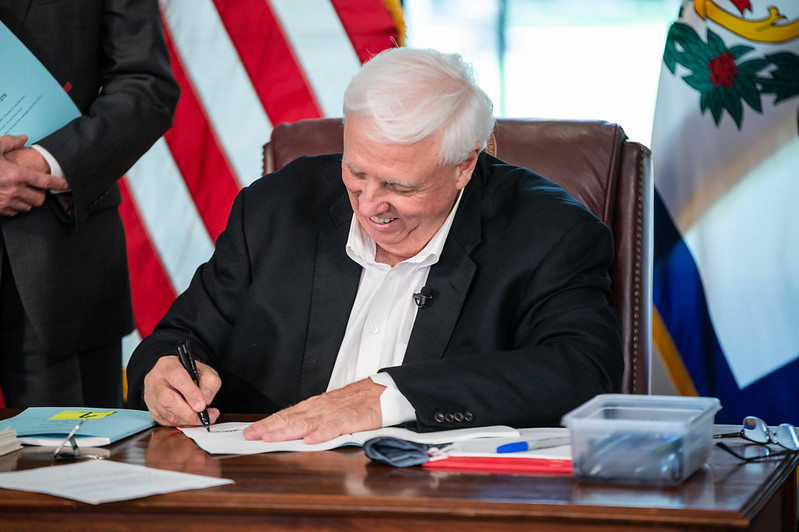 Gov. Jim Justice signs a bill during a ceremonial event.

“What I’ll plan to do is either let it go into law or sign it,” Justice said during a Saturday night briefing about the end of the legislative session. “I don’t know which one quite yet.”

If he does that, Justice would become the fourth governor in America to accept such a bill. Tennessee Gov. Bill Lee was the latest governor to sign a similar bill into law, joining Mississippi and Arkansas.

The state Senate passed a bill on Thursday, and the House of Delegates voted to agree the next day, completing legislation.

Advocates for the bill said it would protect young female athletes from competing against stronger athletes who were born male.  Justice, who is also a high school girls basketball coach, was in that category. “From the standpoint of our girls, especially, in middle school and high school it discriminates,” he said.

Opponents said the bill is discriminatory, mean-spirited, a likely turnoff for business investment and a possible conflict with competition under the NCAA.

“If this bill becomes law, it will be a legal and financial disaster for our state,” said Andrew Schneider, executive director of Fairness West Virginia.

The Senate Education Committee changed an early version of the bill, dropping a requirement for proof of gender and instead saying “any student aggrieved by a violation” may bring an action against a county board or state institution of higher education. And the committee extended the bill to apply to sports at the college level.

NCAA guidelines permit transgender athletes to compete for college teams after at least a year of testosterone-suppression treatment. More than 500 student-athletes have signed a letter  to the NCAA, pushing a halt to championship events in states that restrict or aim to restrict transgender athletes.

But he expressed concern about it at the collegiate level.

“It concerns me that we may miss out on a really important sporting event or something that could come to West Virginia that we miss out on,” the governor said.

Advocates for LGBTQ communities have said the bill could further ostracize young transgender students who may already struggle with their place in society. Fairness West Virginia had been urging Justice to veto the bill.

“He needs to veto this bill as soon as it makes its way to his desk,” said Schneider of Fairness West Virginia.

In the end, Justice said, he approves of the bill.

“I think the benefits of it way outweigh the bad part of it,” he said.