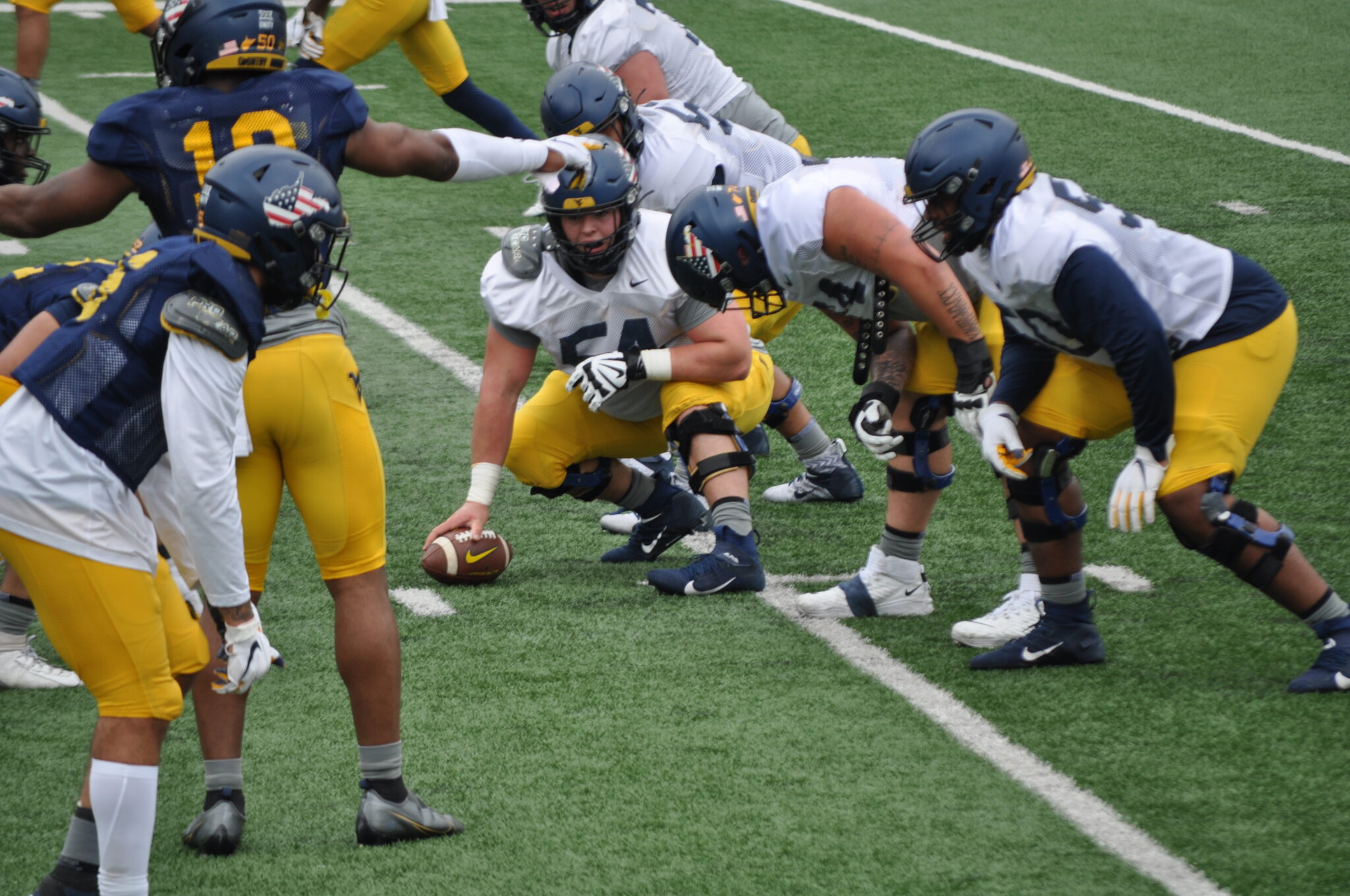 Center Zach Frazier calls out signals before a snap. Photo by Greg Carey/WVMetroNews.com

MORGANTOWN, W.Va. — Rarely are sophomores counted on to provide much leadership.

Yet since the moment he stepped on campus to begin his football career at West Virginia, Zach Frazier has proven to be anything but the norm.

Frazier started nine games and appeared in all 10 as a true freshman for the Mountaineers last season, spending his time between left guard and center. Although he was the starting center against Eastern Kentucky in first college game, that was more out of necessity due to suspension.

Still, Frazier was the first true freshman to start up front for West Virginia in at least 40 years and barring something unforeseen, he’ll spend his second season at center.

“Most of his work is at center,” West Virginia coach Neal Brown said. “I really like his progress there. I think he has a chance to be a special player. He’s strong and really understands the game. He studies it. He’s the quarterback up front without question. I have high expectations for him at that position and I’m pretty fired up about it.”

Without a surplus of experience along the offensive line last season, Frazier was more or less forced into action in 2020. But he more than held his own at both positions, earning all-Big 12 Conference honorable mention honors, while ESPN named him a true freshman All-American.

“Switching to left guard in the middle of the season, it just taught me to be versatile,” Frazier said. “In fall camp, I learned center and I haven’t really learned much of guard. Switching there, I’m just always thinking on my feet.”

Frazier, who starred at Fairmont Senior High School, is trying to become more vocal as a center.

“I have to make the calls for the line and really use my voice when before I hadn’t had to do that,” he said. “It’s something I had to work on. As a person, I’ve just been working on myself. As a player, I’m continuing to work on my craft and trying to perfect my technique and I’m always working on it. It’s never good enough.”

While the level of physicality in spring football usually isn’t the same, the 6-foot-3, 305-pound Frazier is presented different looks from the Mountaineer defense that provide him the chance to relay observations to teammates.

“When you play center, you have to pretty much command the whole line in protection and the run game,” Frazier said. “You have to be able to communicate a lot more.”

In addition to increasing his communication, Frazier says he’s also playing at his own speed because of the experience garnered as a freshman.

“Everything feels a lot slower when I’m out there,” Frazier said. “The game speed has slowed down for me, because I understand the offense a lot more than I did last year. It’s a lot easier and comes more natural.”