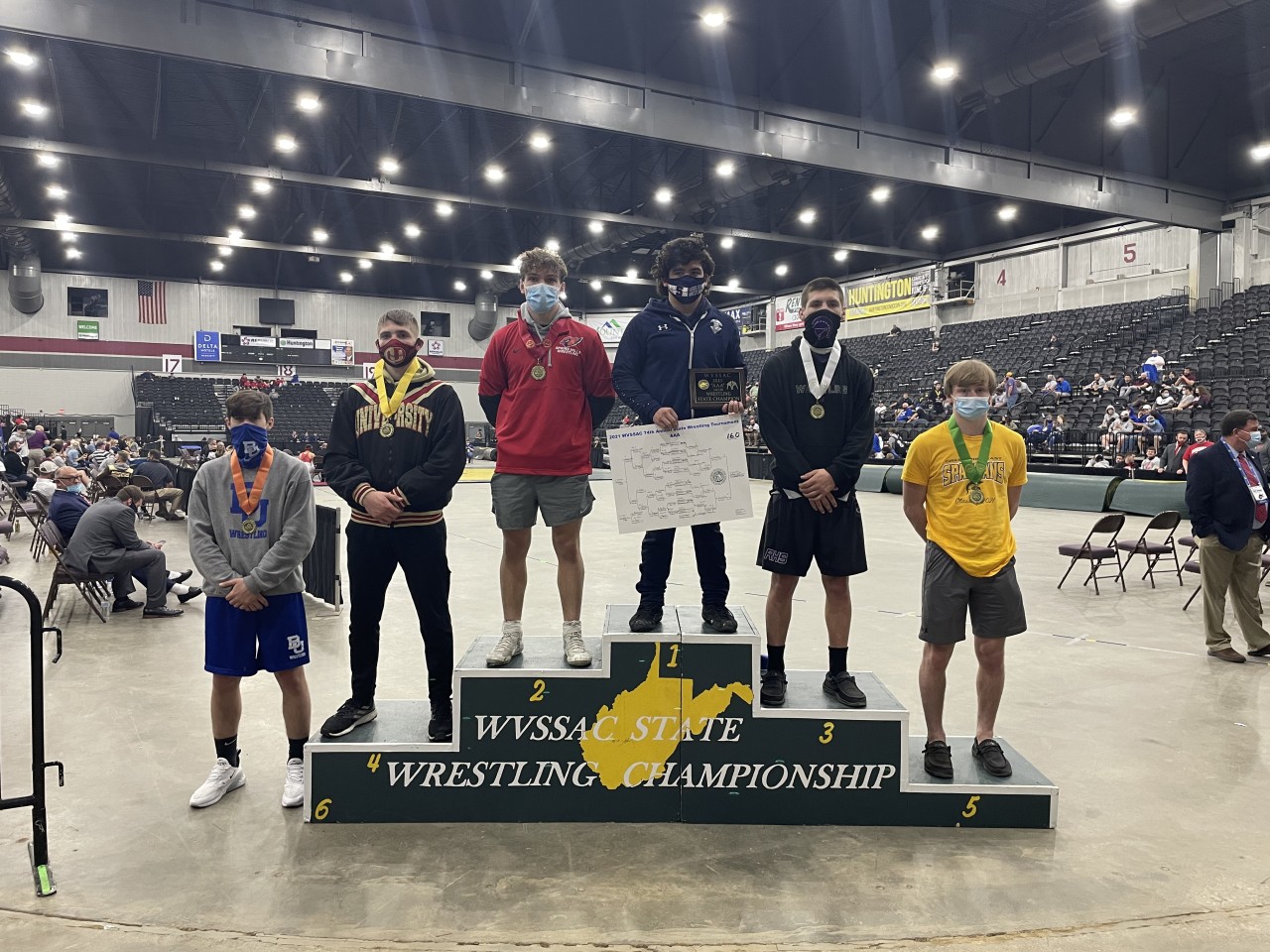 Parkersburg South's Gavin Quiocho (above the 1) won the 160-pound weight class to become a four-state champion. Photo courtesy of WVSSAC

Then the Patriots show up at Mountain Health Arena and demonstrate to their opposition they more than have what it takes to finish on top in Class AAA.

The latest example came Tuesday night when Parkersburg South, despite a lackluster showing in the championship round, put a convincing wrap on the 74th state tournament with its seventh consecutive Class AAA championship.

At some point in the morning championship session, the Patriots had racked up enough points to stay clear of runner-up Spring Mills.

Parkersburg South had nine wrestlers in the finals, but went 3-6 and still finished with 264 points. Spring Mills totaled 172.5.

“They responded well,” Smith said of his team. “They wrestled well the last two days. Last night we hoped to go 11-for-11 in the semis, but we went 9-of-11 and that’s pretty good.”

One of South’s winners was Gavin Quiocho at 160 to become a four-time state champion. He beat Patrick Jackson of Spring Mills, 10-4, to finish 22-1.

“I love to go on my feet,” Quiocho said. “I’m most comfortable. That’ll have to change in college (Glenville State). It’s crazy (four-time champ). I’m grateful to have the opportunity.

Parkersburg South’s other two champs were Brayden Johnson at 138 for his third state title and freshman Gage Wright, who pinned Kade Bradbury of Washington in just 11 seconds to close his first year at 24-0.

In the past, Parkersburg South usually had a strong Friday session to take charge. This year, due to the coronavirus pandemic, the season got off to a late start and the state got split as Class AA-A compete Wednesday and Thursday.

“We usually had a good Friday night. We wanted to try that same approach,” Smith said. “Most of the coaching’s in practice. It’s a mental thing in the match. Sometimes you just have to react. Got to stay calm.”

Smith knows all other Class AAA teams have their sights on the Patriots year after year.

“Seven in a row? It’s hard. We have a target,” Smith said. “It’s been a different year. We had to stay focused, bear down. I can exhale a little now that it’s happened. It doesn’t feel over though until it’s over.”

This was the first live event at Mountain Health Arena in more than a year due to the pandemic. There was limited attendance, social distancing and masks worn by fans and coaches. The state tournament, normally held at the end of February or early March, got pushed back to this week due to COVID-19 and all the protocols.