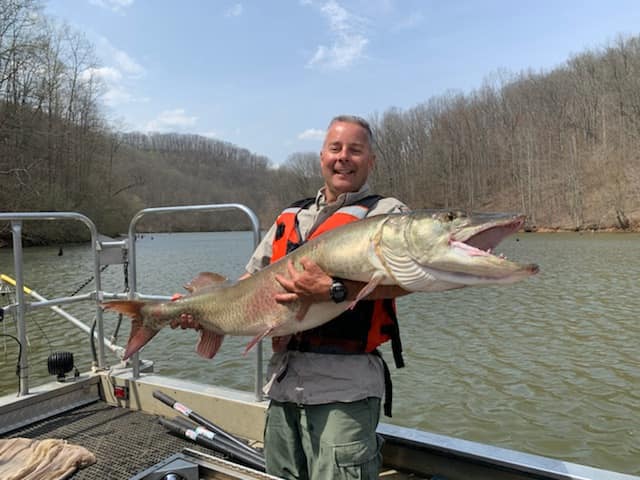 DNR Fisheries Biologist Jim Walker cradles a 35 pound, 52 inch musky shocked up at Stonewall Jackson Lake to be part of the mortality study

ROANOKE, W.Va. — When the electrodes hit the water, biologists with West Virginia’s Division of Natural Resources are never sure what will come floating to the surface. During a recent skim of the water on Stonewall Jackson Lake, Biologist Jim Walker and his assistant discovered a monster.

“Wow, what a fish!” Walker said during an appearance on West Virginia Outdoors, still enamored with the giant musky he and his team managed to put into the boat to become part of a multi-state research project.

The big musky was outfitted with a radio transmitter internally and a visible tag. Then after a few very important pictures was released back into the water. The fish wasn’t necessarily unusual for Stonewall Jackson Lake. The central West Virginia lake was selected a few years ago for special regulations to make it a trophy musky destination for anglers. Walker said the regulations have started to pay off in big fish like the one his team shocked up.

“Yeah, it’s a great lake with a great forage base and since we implemented the reg I keep anticipating the next state record will come out of there. So far, it hasn’t shown up, but I’m sure there are a few swimming around in there,” he said.

The study, launched this year, has put the tags on about 90 fish at Stonewall Jackson. A WVU student is working on the project as part of a graduate study. The aim is to determine the prevalence of delayed mortality in muskies which are caught and released. Walker said there’s some serious concern among hard core musky anglers about the survival of fish after catch and release during the warmest times of the year.

“There’s a lot of controversy over whether they should even be fishing. July and August is when everybody has time off, but nobody wants to fish if it’s actually hurting the population,” Walker explained.

Anglers who catch one of the tagged fish are asked to call the number on the tag and share information about where the fish was caught, the date, and the time. As part of the study, the student can dial up the radio transmitter on the fish and see if it survived and where it went.

Walker believed it was good data which will be helpful in making regulation decisions for the future.

“We’re going to get a lot of good information from this. It’s a great project and WVU is a super partner. There are other states involved. There’s a lot of interest in this study,” he said.

Ohio, Wisconsin, Virginia, and North Carolina are also partnering on the study and Muskiest Inc. is involved. Plus the West Virginia DNR will keep a certain number of musky in a pond at the Palestine hatchery to help with more research.

“We’re putting wild fish into a hatchery pond and trying to catch them there during warm conditions. We release them back into that pond, that way you know they’re in our pond and if they die, they’ll float to the top and we’re going to find them. It’s a controlled portion of the study,” Walker said.