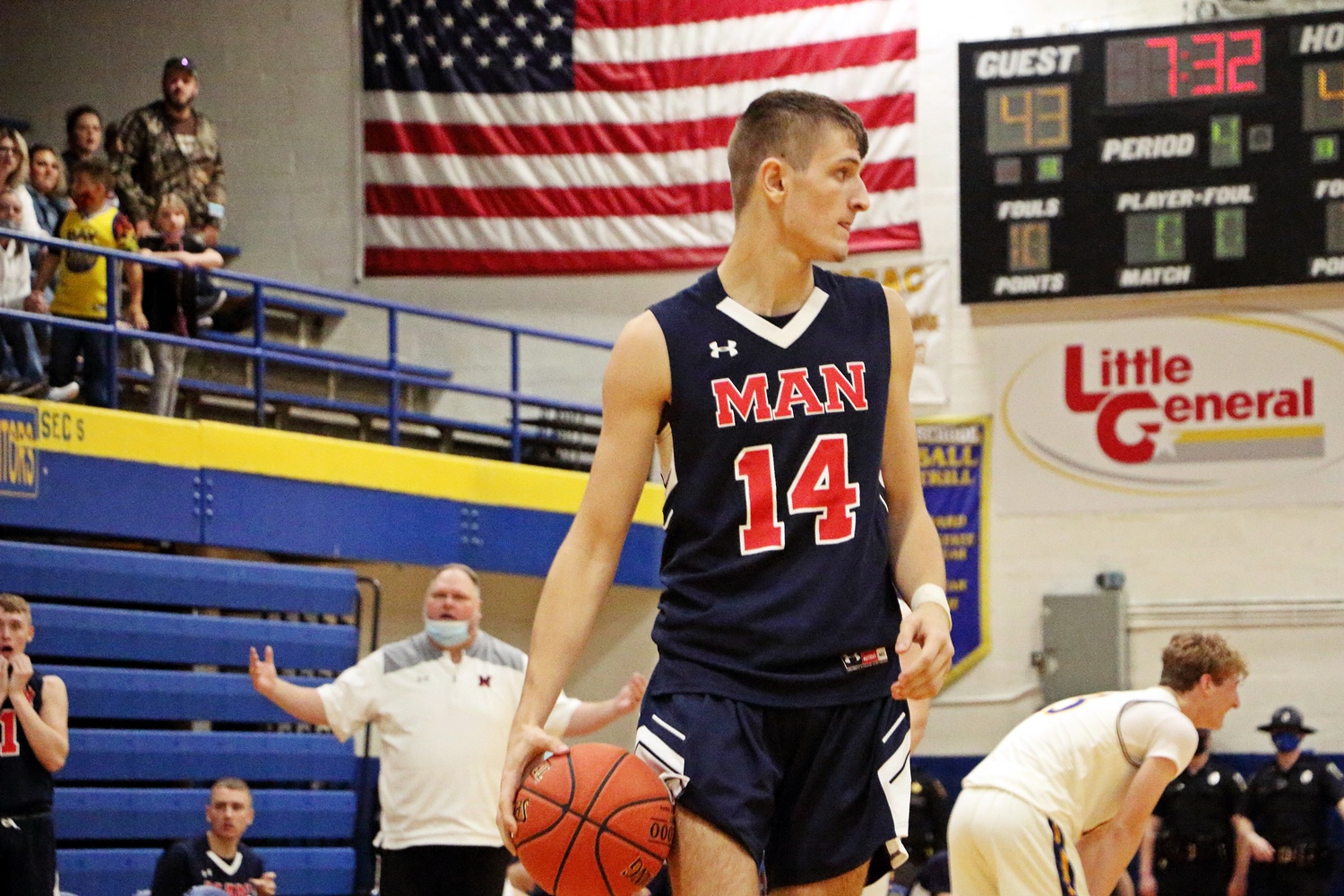 Austin Ball leads top seed Man in the Class A state tournament. (Photo by Boothe Davis/Captured by the Moment Photography)

CHARLESTON, W.Va. — After Man set the school record with 18 wins a season ago while a member of Class AA, Hillbillies’ head coach T.J. Blevins figured a special 2021 season could be in store if his team got the chance to play it.

Sure enough, now playing in Class A, Man has qualified for the state tournament and comes to Charleston as the No. 1 seed. The Hillbillies (13-2) face eighth-seeded Tucker County (12-5) at 5:30 p.m. Tuesday in one of four Class A quarterfinals.

“We kind of knew we had something special going into this year,” Blevins said.

Man’s two losses are by a total of eight points — one to Logan in the regular season, the other to No. 2 seed Tug Valley in a sectional title game. But the Hillbillies bounced back to win at Wahama in a Region IV co-final and secure their spot at the state tournament.

Six-foot-7 junior Austin Ball leads MHS with a near 20-point per game average, while 6-4 Caleb Blevins scores 15 points on average.

The Mountain Lions had a seven-game win streak during the regular season, before dropping three straight down the stretch. Victories over East Hardy in a sectional final and Tygarts Valley in a regional co-final have Tucker County back on track and in Charleston. Senior Zach Colebank averages 17 points and is the Mountain Lions’ focal point.

Three days after its girls program won its first state championship, Tug Valley will take on Cameron in a quarterfinal in a rematch of the girls Class A title game.

The Panthers (12-2) will face the Dragons (12-4) following a lengthy layoff as Tug Valley hasn’t played since the sectional final victory over Man on April 22. TVHS advanced past Gilmer County in regional action when the Titans were unable to play due to covid protocols.

“I worry about us being off for ten or twelve days now,” Panthers’ coach Garland Thompson said. “I’ve seen a lot of good teams go to Charleston and not shoot it well. We’ll have to rebound and play defense.”

Tug Valley won five straight to start the season, then lost twice and has notched seven consecutive wins since.

“Caleb’s a bucket and I think he’s the best player in Class A,” Thompson said.

Cameron enters with six straight victories and is led by 6-7 junior Trevor Beresford — the younger brother of former Dragons’ standout and West Virginia player Logan Routt. Beresford averages a team high 15.4 points and has helped guide the Dragons to their first state tournament.

The Wildcats enter with a 38-game win streak dating back to the start of the 2019-2020 season. Although Pendleton County missed out on its chance to play in the 2020 state tournament as there wasn’t one due to the pandemic, the Wildcats get their chance a year later.

“For our kids and community, there was disappointment last year,” Pendleton coach Ryan Lambert said. “We said at the moment you control what you can control, but it’s tough when you put that much time and effort in. We’re thrilled to be heading to Charleston. We don’t care about seeds. We’re happy we’re in Charleston and we’re going to play a game and try to move on.”

PCHS has won 14 of its 15 games by double figures this season with an eight-point win over Keyser marking its closest contest.

That’s far different from the Cavaliers, who were 5-6 at one point.

After losing its sectional final against Webster County, GWHS went to James Monroe and claimed an impressive overtime win to qualify for the state tournament.

“Kaiden is obviously our go-to guy and our leading scorer, but all four of our other starters have led us in scoring in a game this year and probably not many teams can say that,” Cavaliers’ coach Jared Robertson said. “It makes us tough to defend. We’ve really developed some depth and I think we have more depth than most teams in the state.”

The last Class A champion — Webster County — has an opportunity to defend its title as the No. 4 seed.

The Highlanders (11-6) don’t still have a starter from that unbeaten title-winning team, but had to earn their way to the state tournament with a sectional final victory over the Cavaliers an 82-81 overtime win over Greater Beckley Christian in the region co-final.

“It’s similar to 2019 in that we’re a really good matchup zone team, we play a lot of halfcourt sets and rebound really well,” Webster coach Michael Gray said. “We’re comfortable in the halfcourt, but we do like to push it. I think that will benefit us in the state tournament.”

The Highlanders face Clay-Battelle in a quarterfinal. The fifth-seeded Cee Bees (15-2) have five consecutive wins and will try to use their height to their advantage. Mojo Chisler, a 6-5 senior, and 6-4 senior Gavin Moore average more than 18 and 14 points, respectively.

“They’re not as big as we are,” Clay-Battelle coach Josh Kisner said. “We’re going to try to take our advantages and see what we can do.”