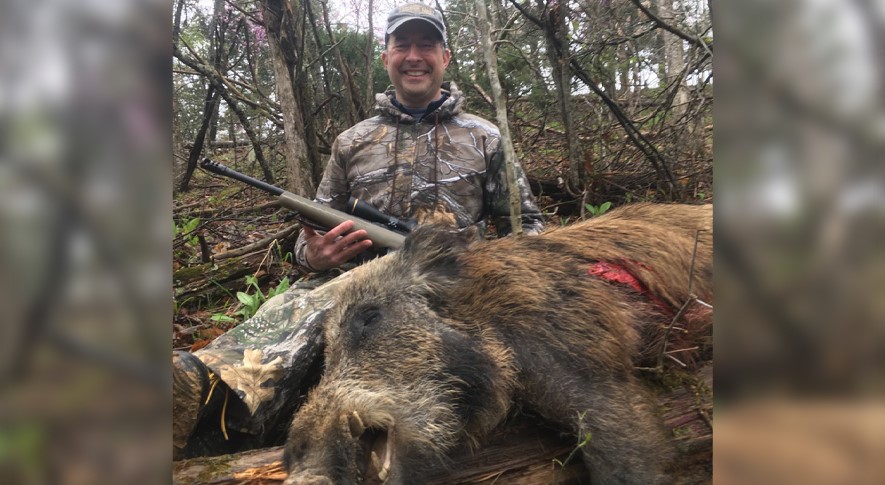 MORGANTOWN, W.Va. — Although he’s one of the most recognizable figures in West Virginia, Tony Caridi will readily tell you he’s not an outdoorsman. In fact, until just over a week ago, the play-by-play man for the West Virginia Mountaineers and longtime MetroNews voice had never fired a gun.

“I know that comes as no shock to 99.9 percent of your listeners,” Caridi laughed in a recent appearance on West Virginia Outdoors.

Listen to “Tony Caridi on WV Outdoors Discusses his wild boar” on Spreaker.


But despite his lack of any experience, Caridi, guided by some experienced folks, recently accomplished something only a handful of West Virginia’s most seasoned hunters ever get to do, he harvested a wild boar.

The trip started as good natured banter among friends on his podcast 3 Guys Before the Game . A listener sent in a picture of a huge wild boar he had killed. Caridi joked he’d like to hunt one. Co-hosts Brad Howe and Hoppy Kercheval chided he’d never be able to do it. So the listener, Bill Tobre, invited Tony to come take a hunt with them at the Mountain Meadows Hunting preserve in Monroe County. Tobre had killed his massive hog in January while hunting with the organization Warriors in the Field.

“When I learned about the organization, it was a no brainer I was all in. I met Dave Whittaker and heard the story about how he formed this organization to take veterans hunting and fishing as a way to say thanks. He also told me about a situation with his dad which was part of it.  I knew then we could do this and draw attention to this great organization,” Caridi explained.

Right after WVU’s Gold and Blue Scrimmage, Caridi made the long drive to Monroe County to get ready for his big trip the next day.

“They said , ‘You want to get some shots off?’ I’m used to hearing that from Coach Huggs, so I figured I should,” Caridi said.

Using a borrowed rifle he fired two shots at a target, hitting high on the first one and dead center on the second. The group headed off to look for a hog some of the guys had already scouted out the day before.

“They had found exactly what we wanted. This hog was big, ugly, mean. The day before it had charged Dave twice and he had to draw his side-arm on him. This was exactly what I wanted and they thought we’d be able to find him,” Caridi explained.

Soon the big hog was spotted from a distance and the stalk began.

“This was a total stalk. We were walking and looking and walking and trying to figure out where he was, I guess we’d been walking 30 to 45 minutes and I looked down the hill and I spotted him. I whispered to one of the guys, ‘Is that him?’ It was him.” laughed Caridi, vindicated by just being the first to spot the hog.

Following careful instruction of his guide, Caridi shouldered his loaner rifle with no rest, took three deep breaths to calm himself, squeezed the trigger, and dropped the hog where he stood with a perfectly placed shot through both lungs.

Although the experience was thrilling, Caridi said the bigger thrill was to raise money and awareness for Warriors in the Field.

“It’s a tremendous organization. Dave has a huge heart and there are no administrative costs. All of the money goes to saying thanks to the vets. It’s fantastic,” Caridi said.

He was especially proud of podcast sponsor Burdette Camping who made a significant and long term contribution to the organization.  He hoped the exposure would continue to benefit the group for a long time to come. He also was able to record the next podcast with the grin of a Cheshire cat.

“Brad still doesn’t give me any credit, but Hoppy had to admit he was impressed,” Caridi said.

In the grand scheme of things, that may have been a more challenging accomplishment than killing your first wild boar.