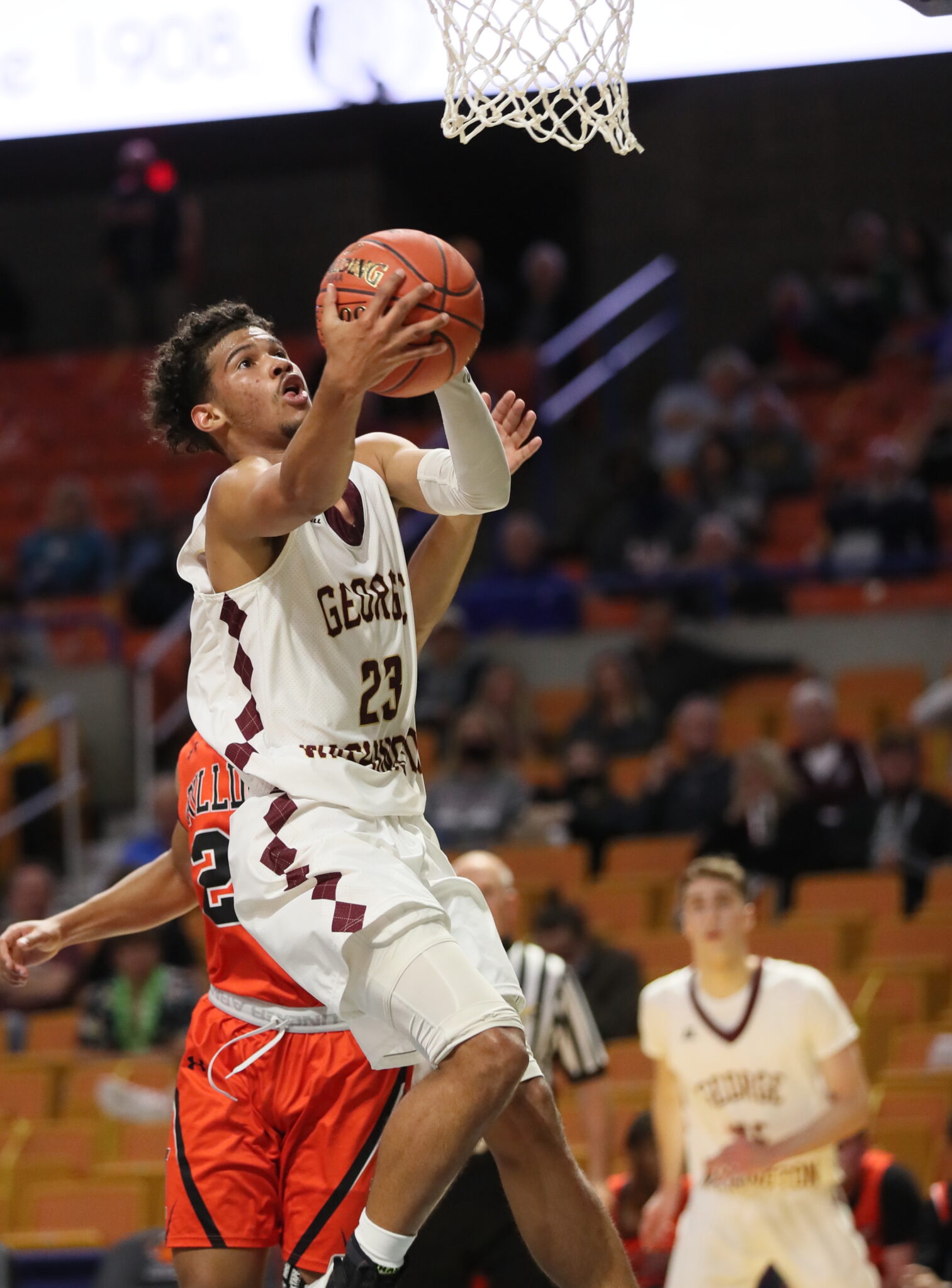 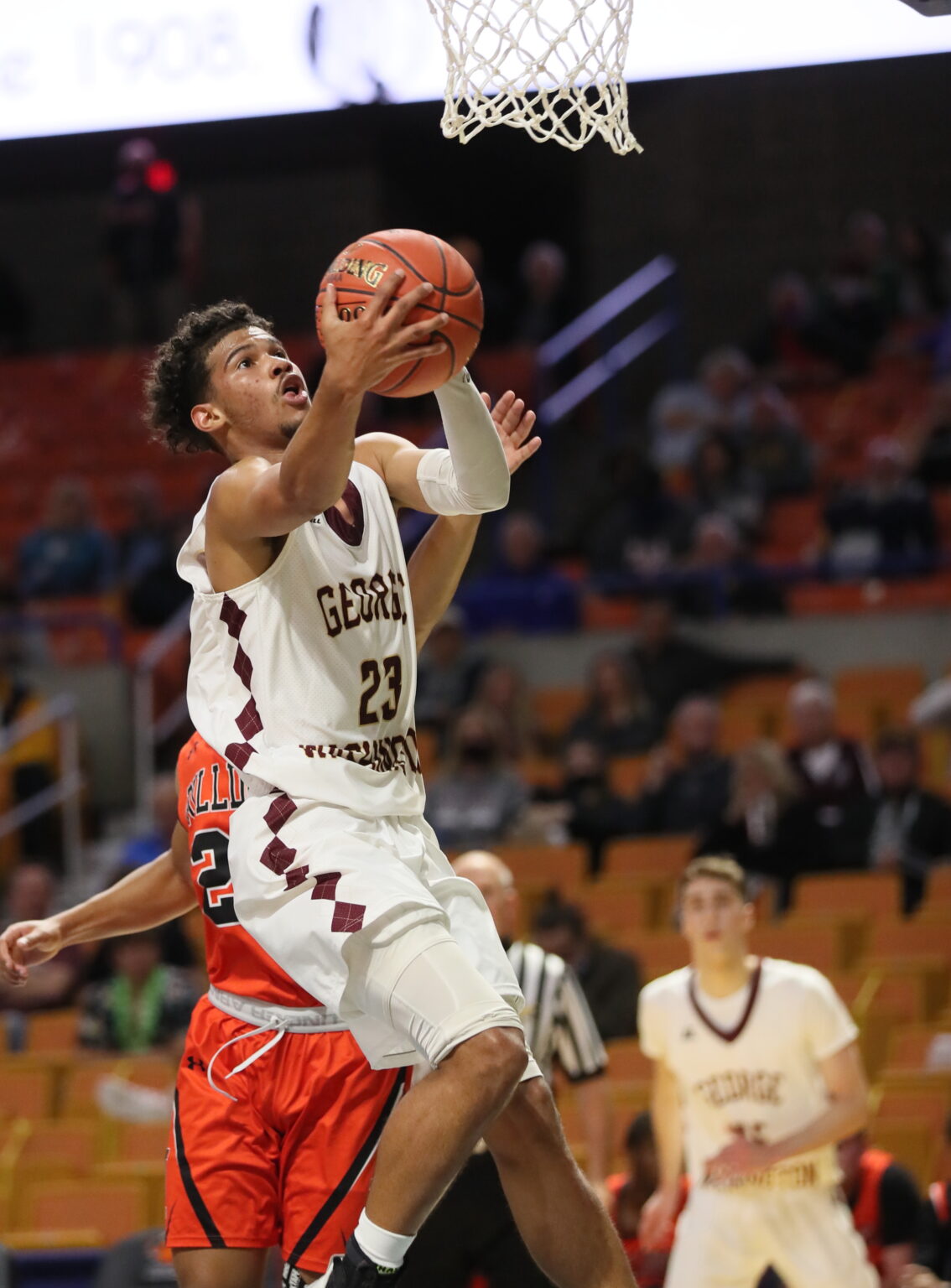 George Washington's Mason Pinkett soars to the basket for two of his 23 points during the Patriots' win over Martinsburg. Photo by Eddie Ferrari 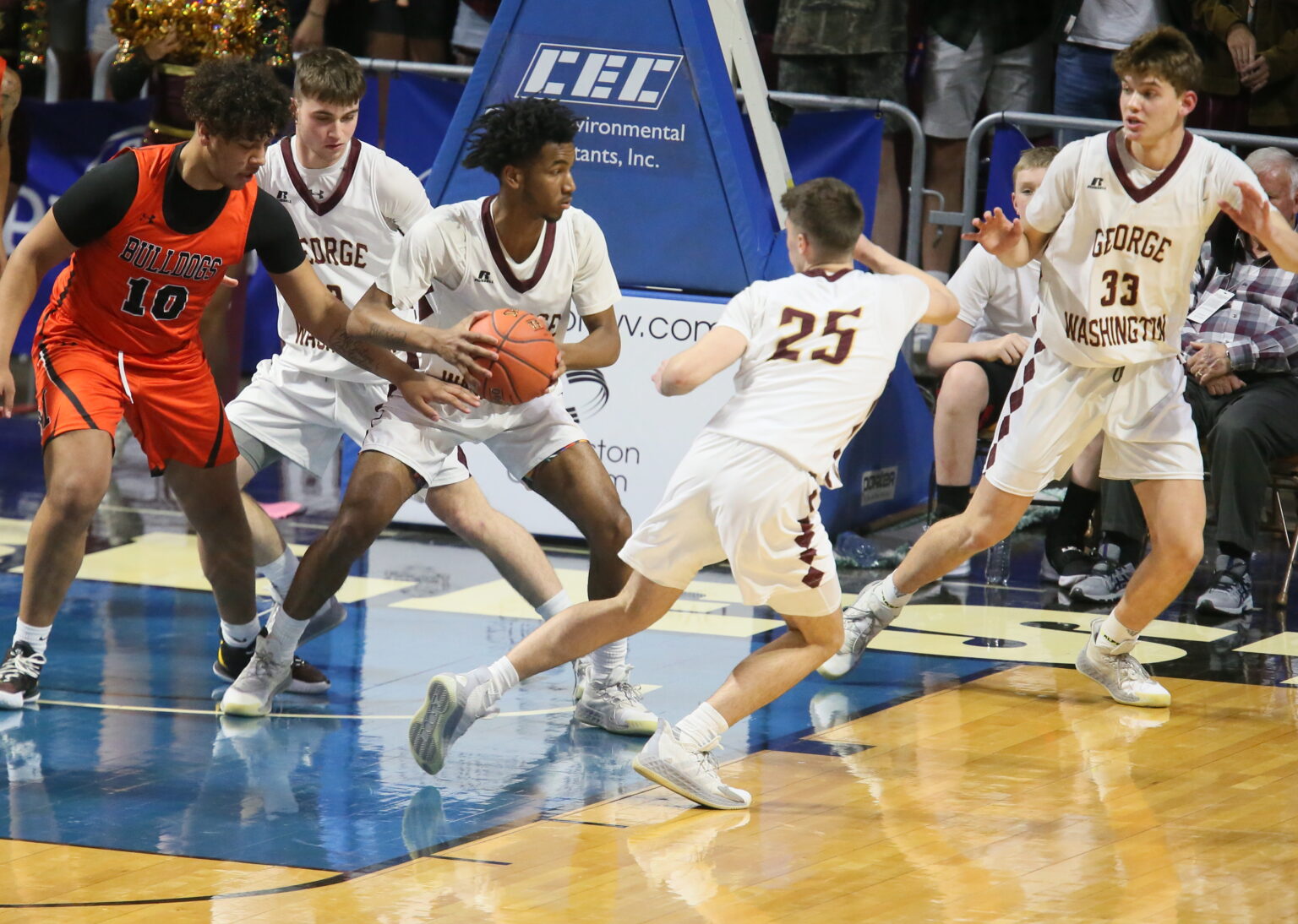 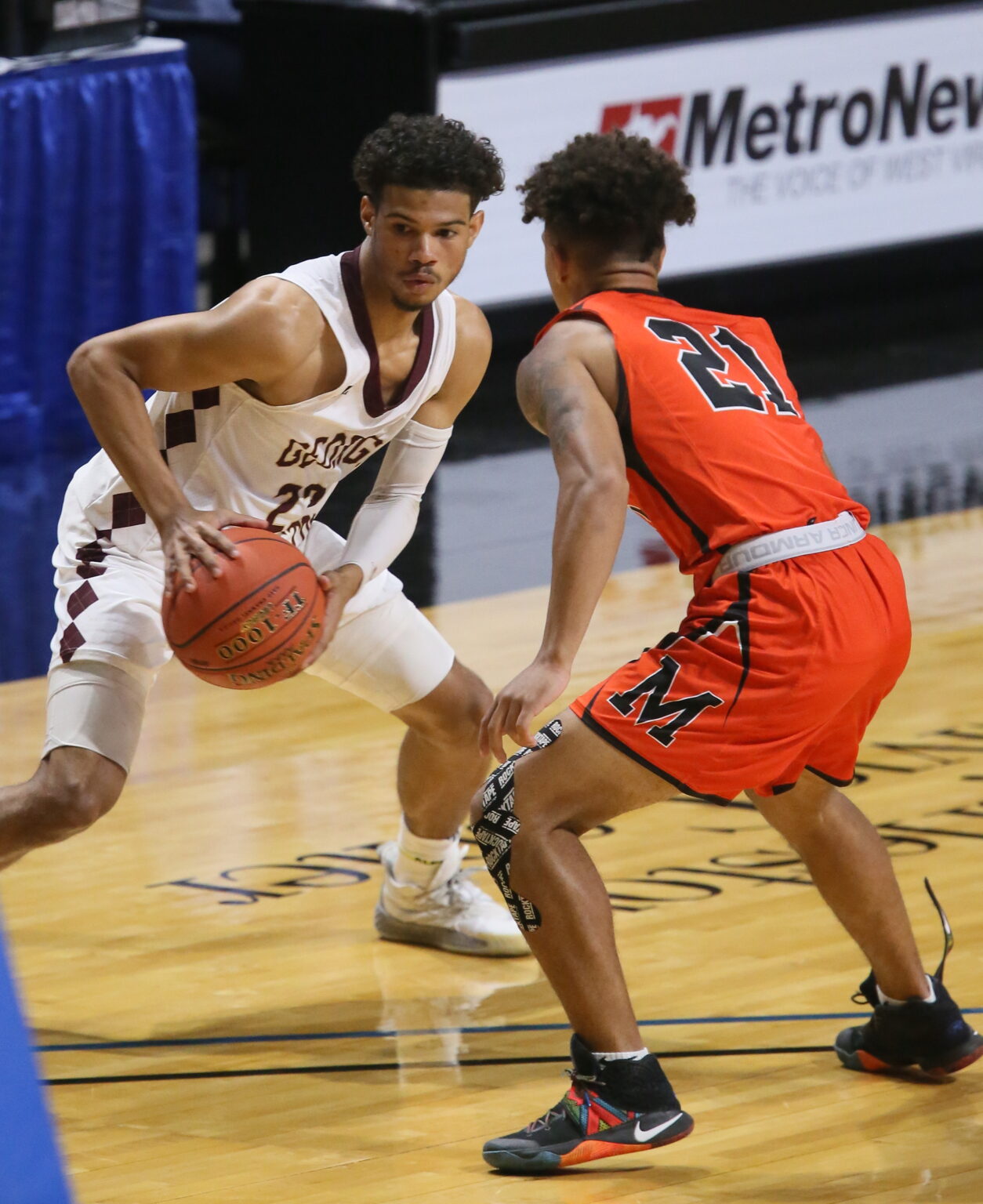 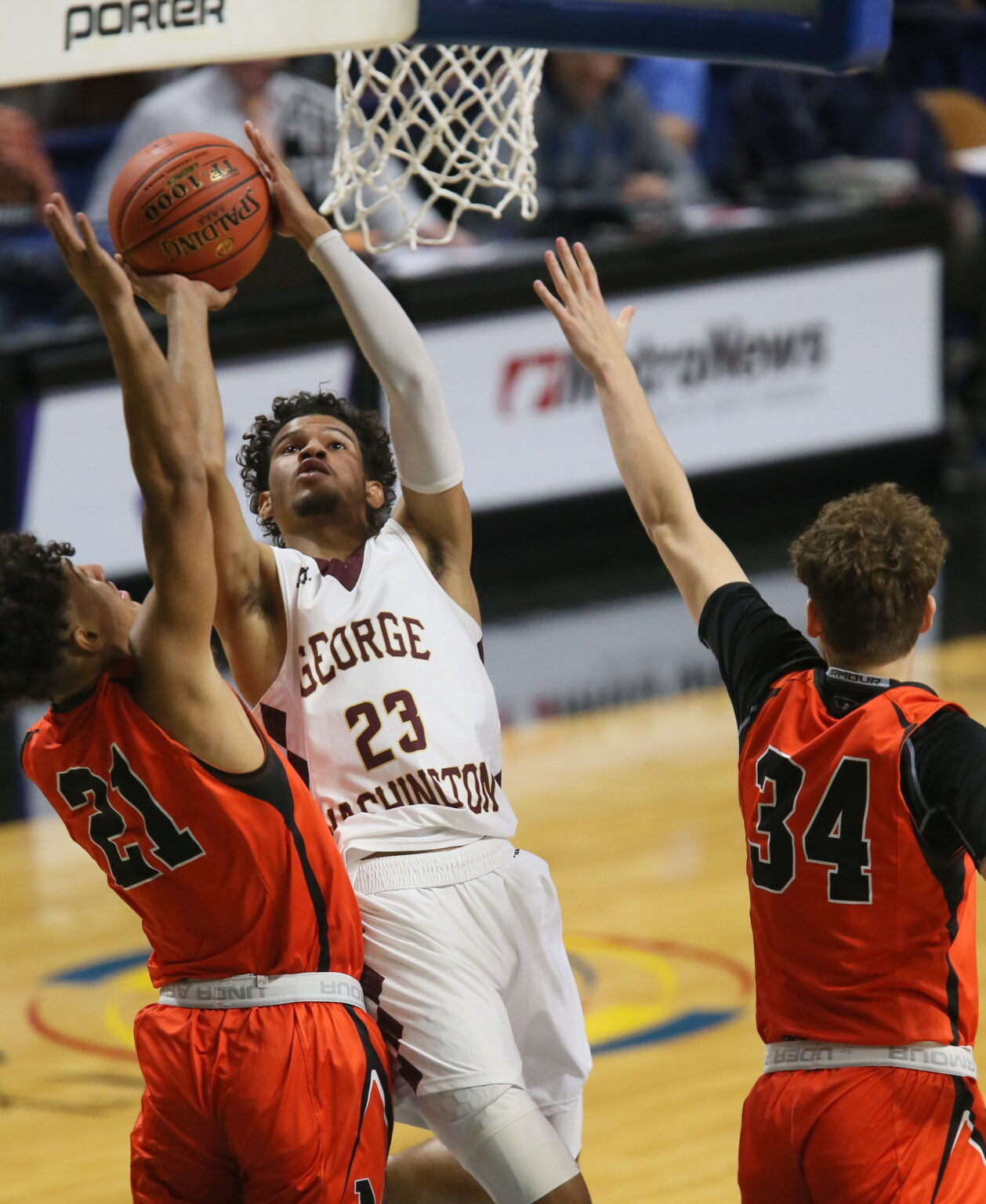 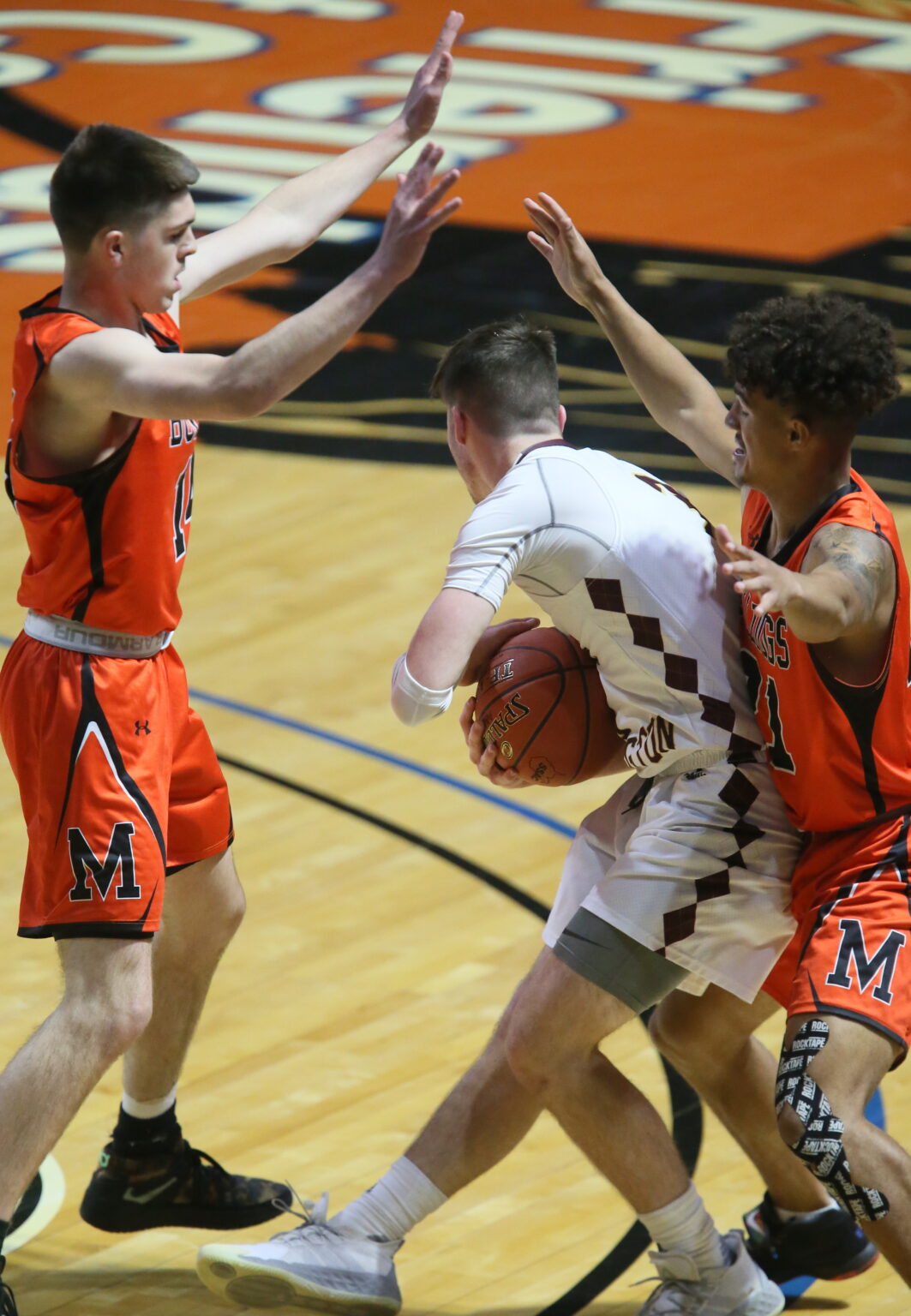 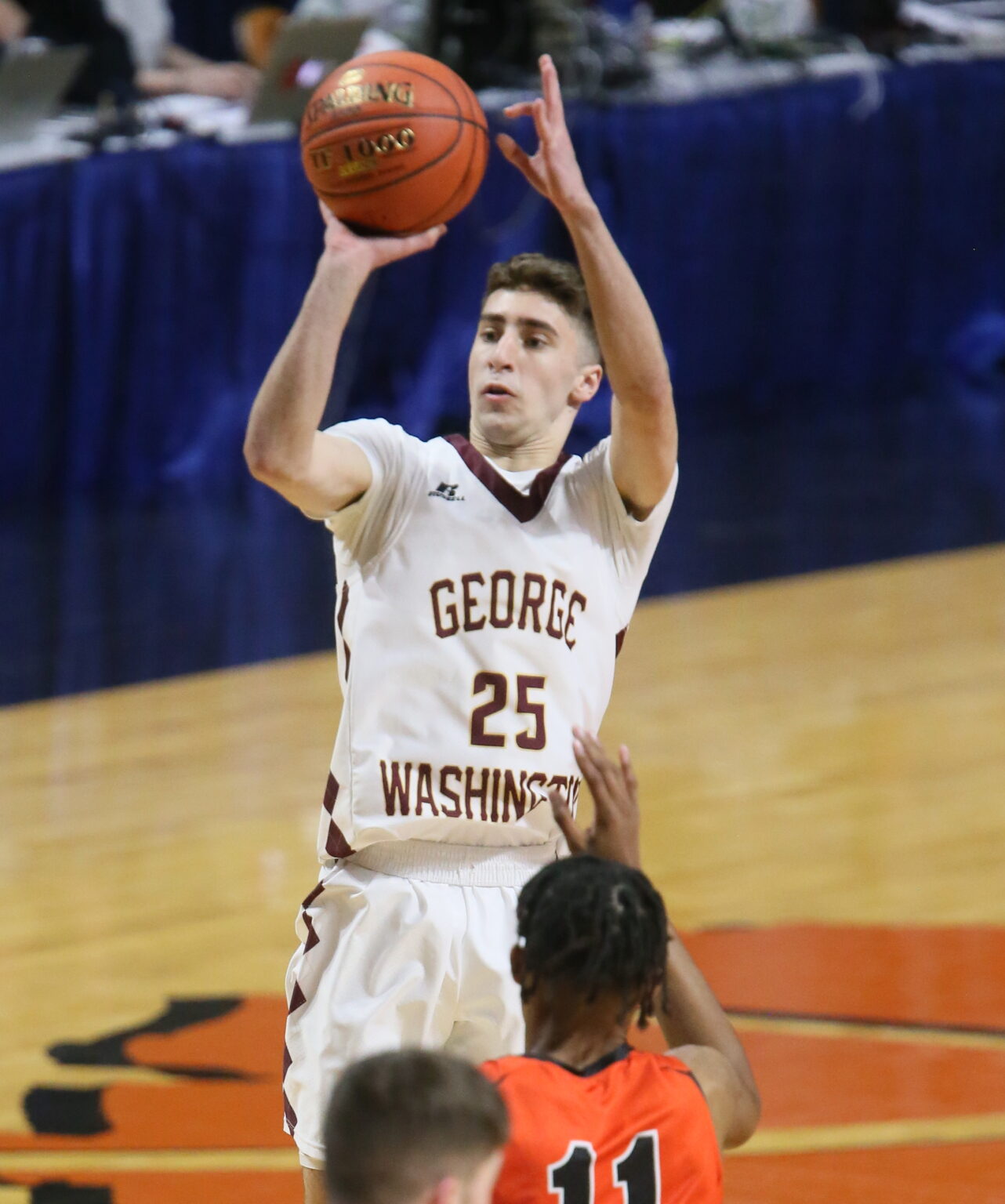 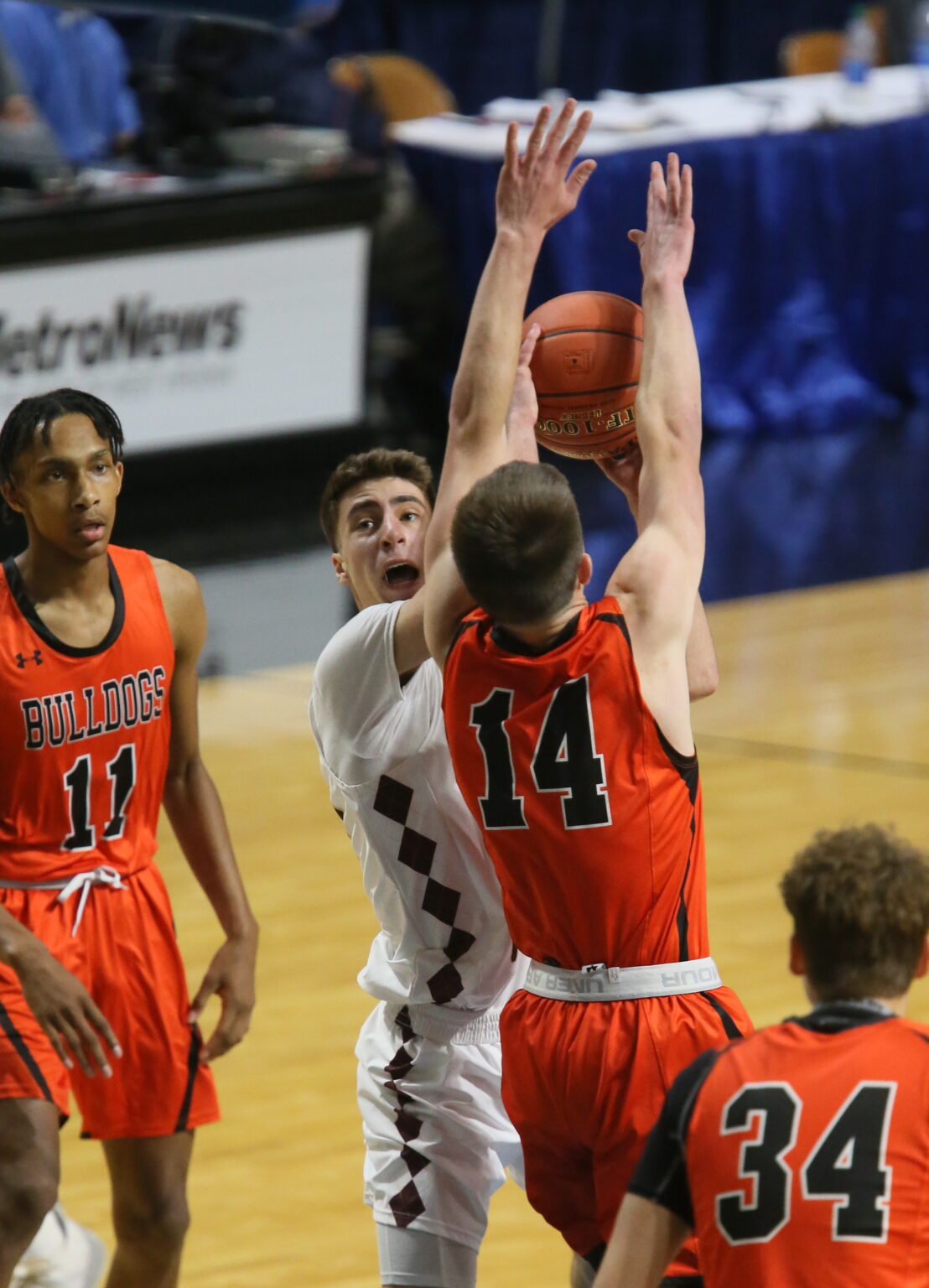 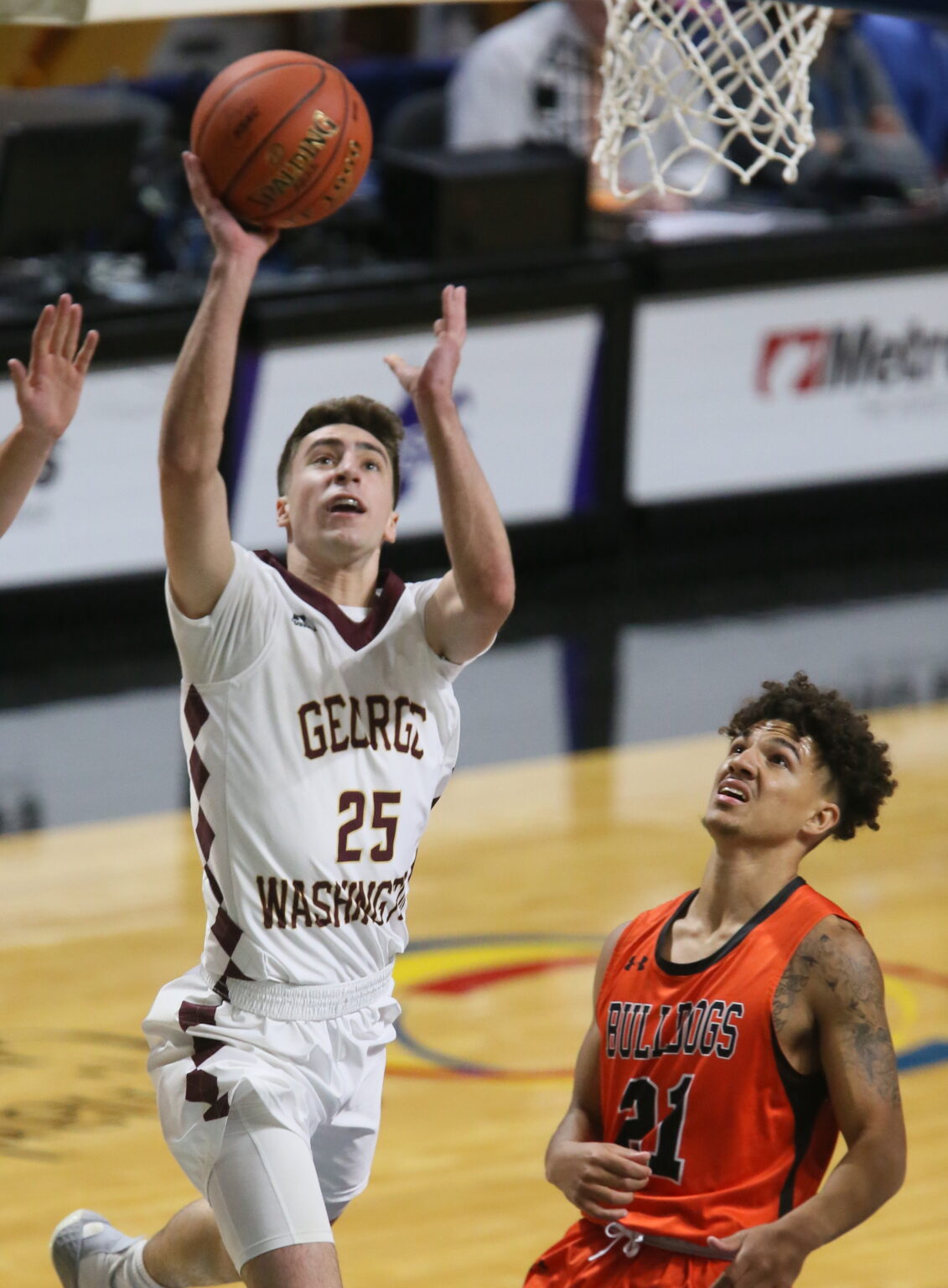 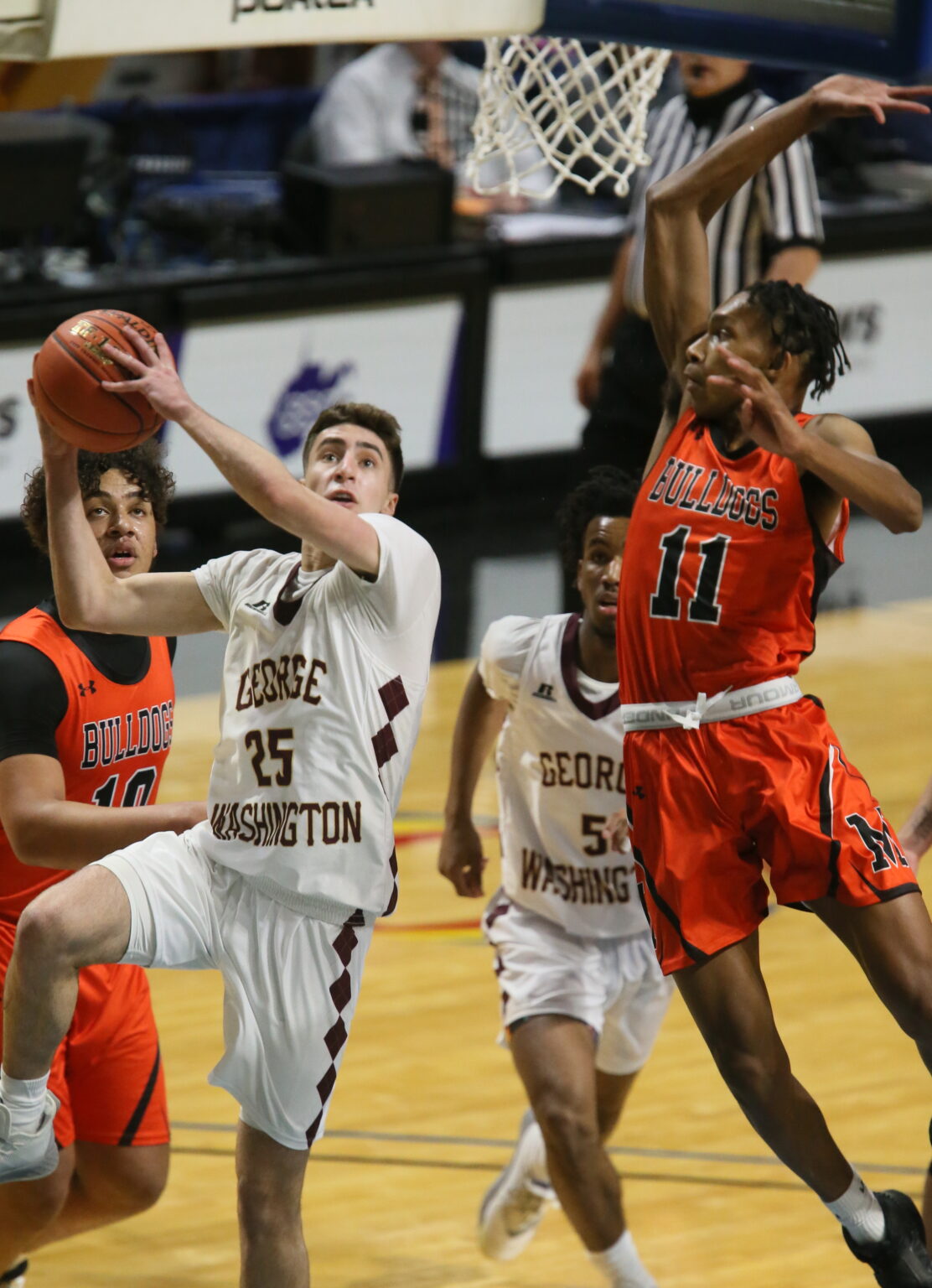 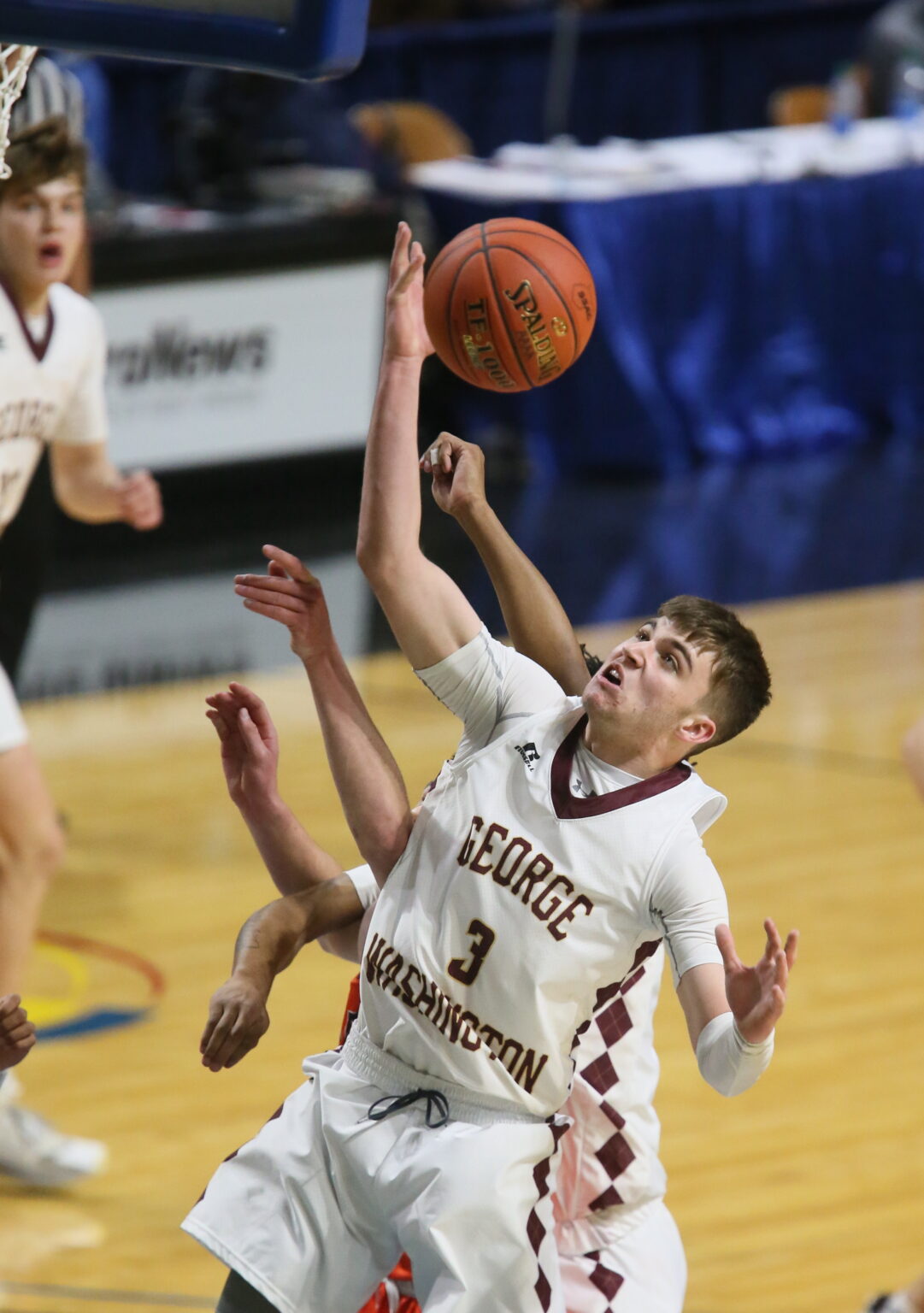 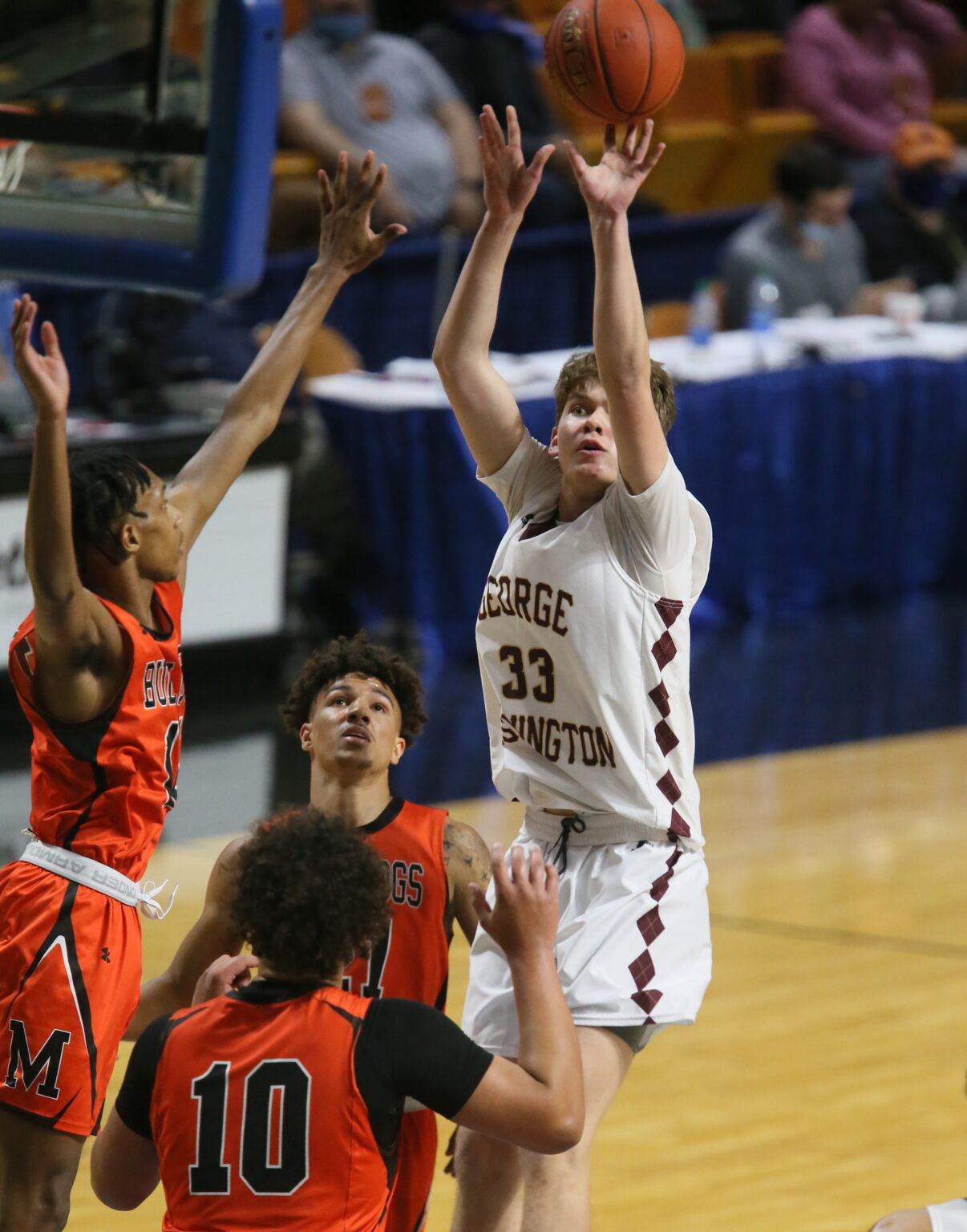 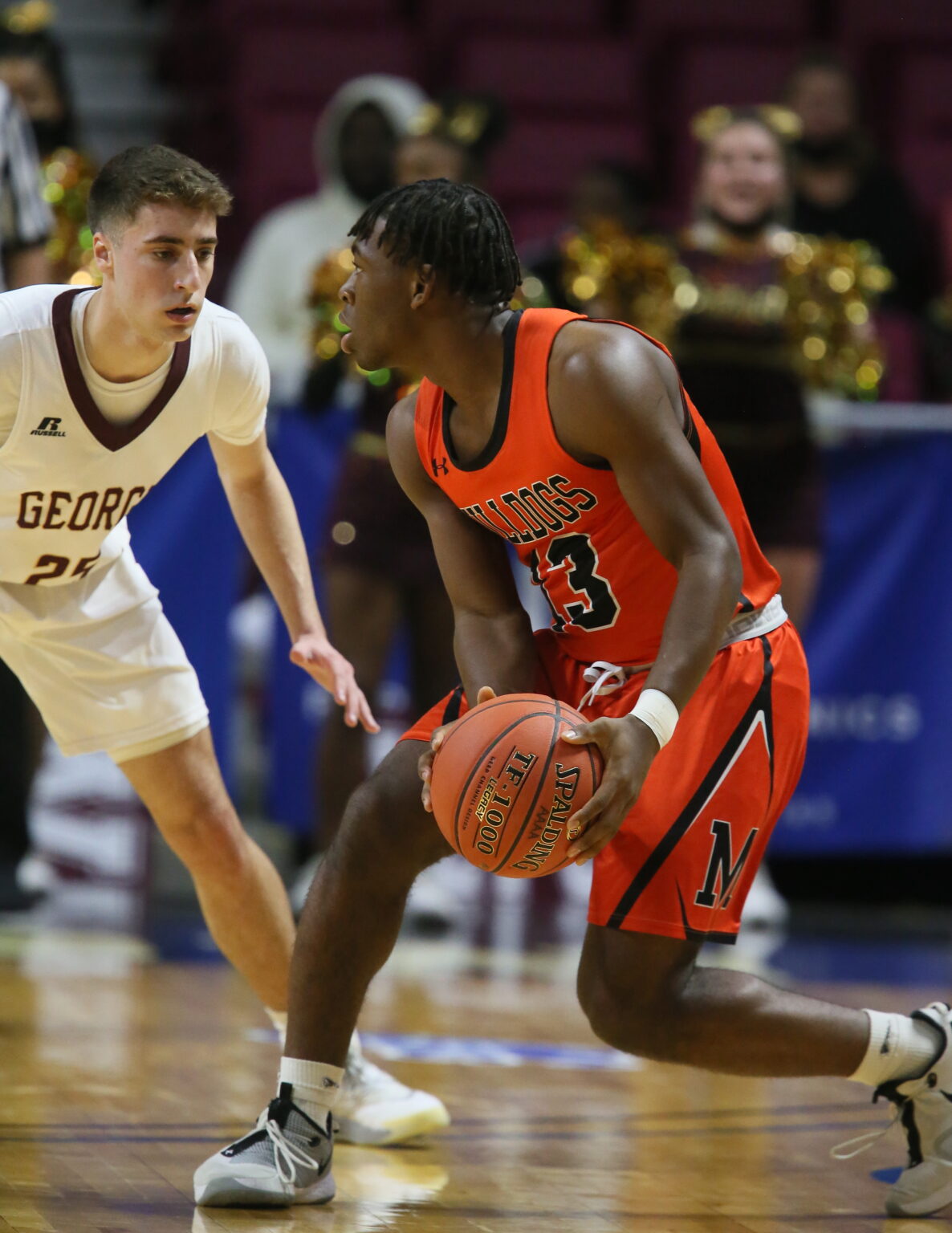 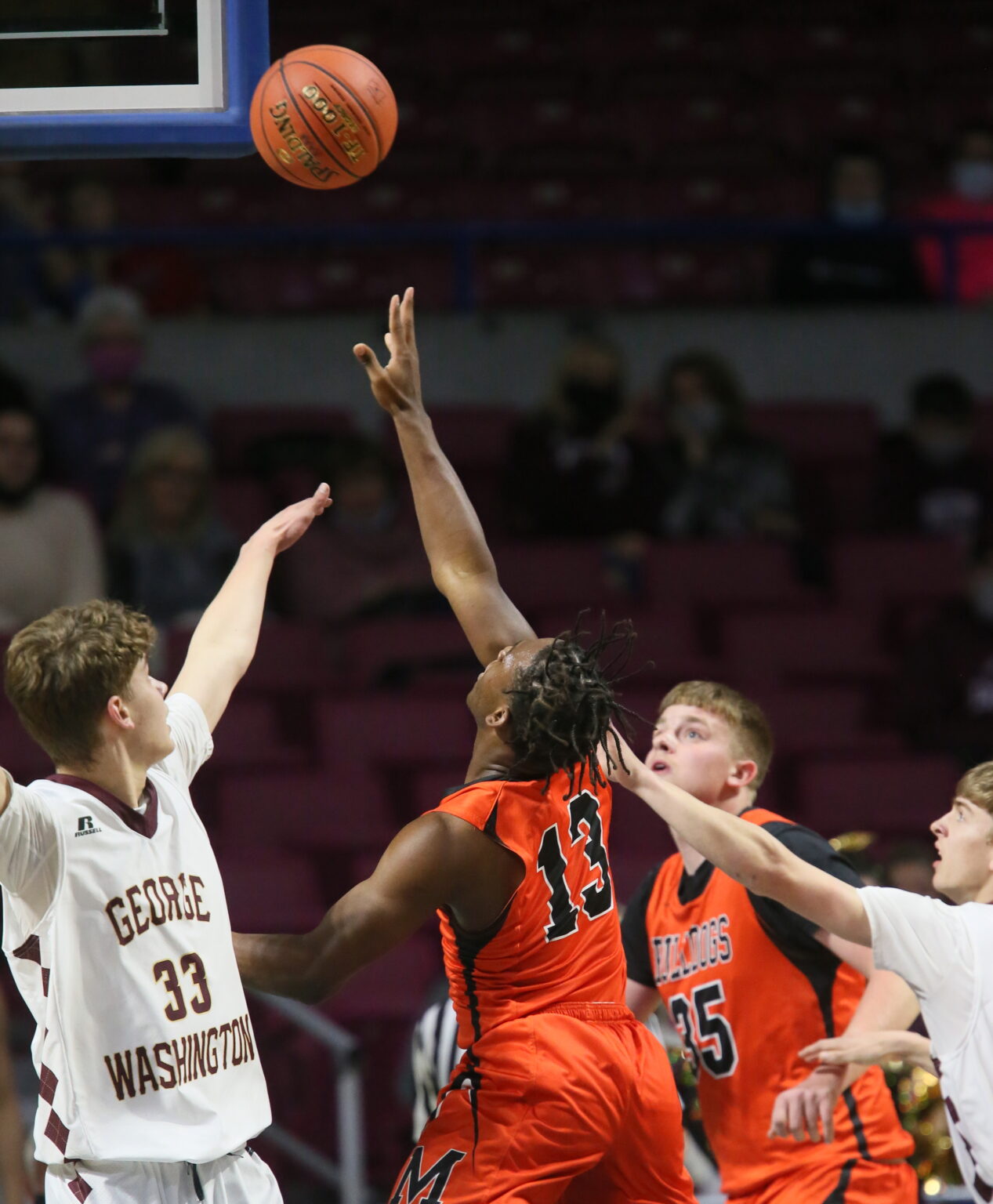 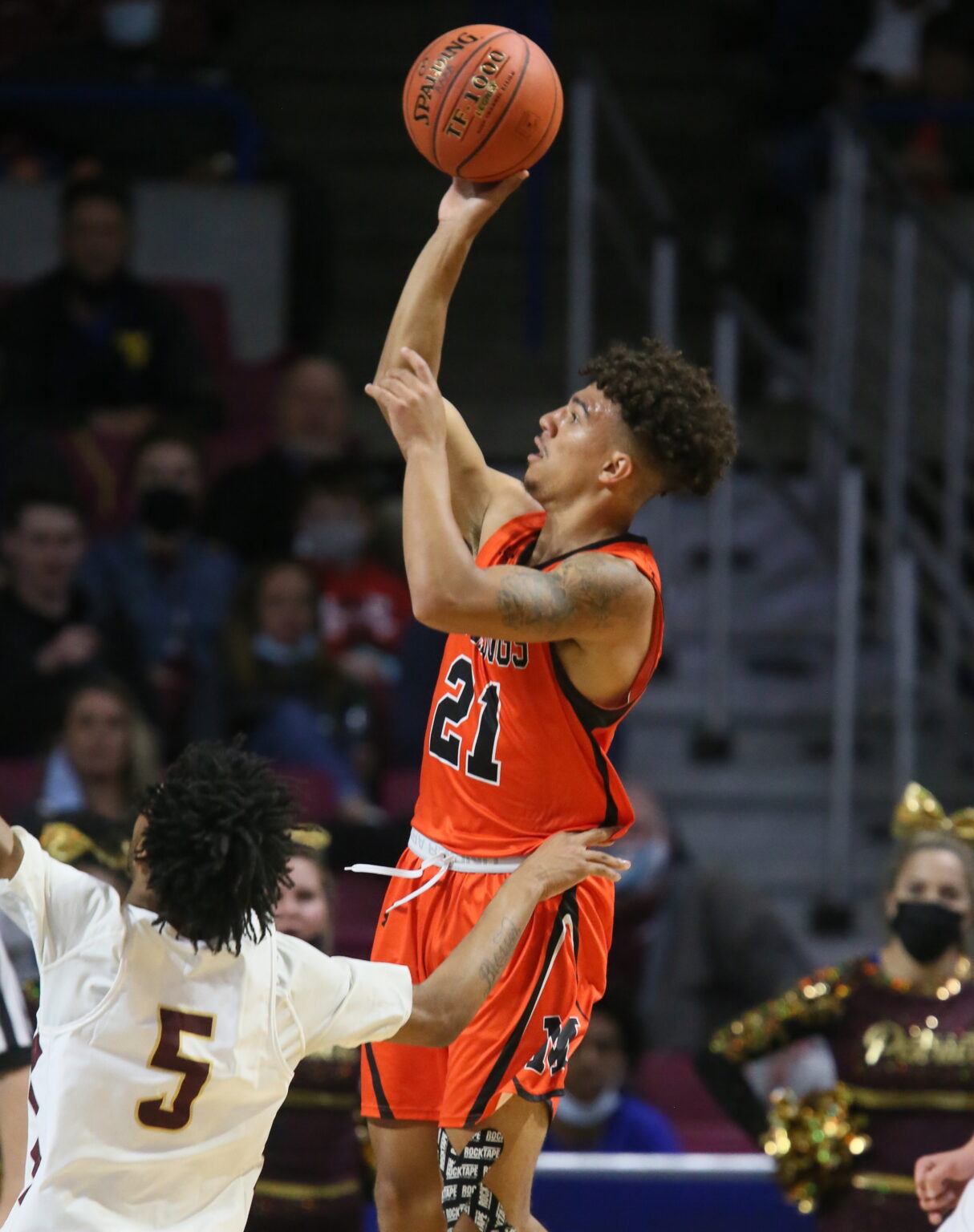 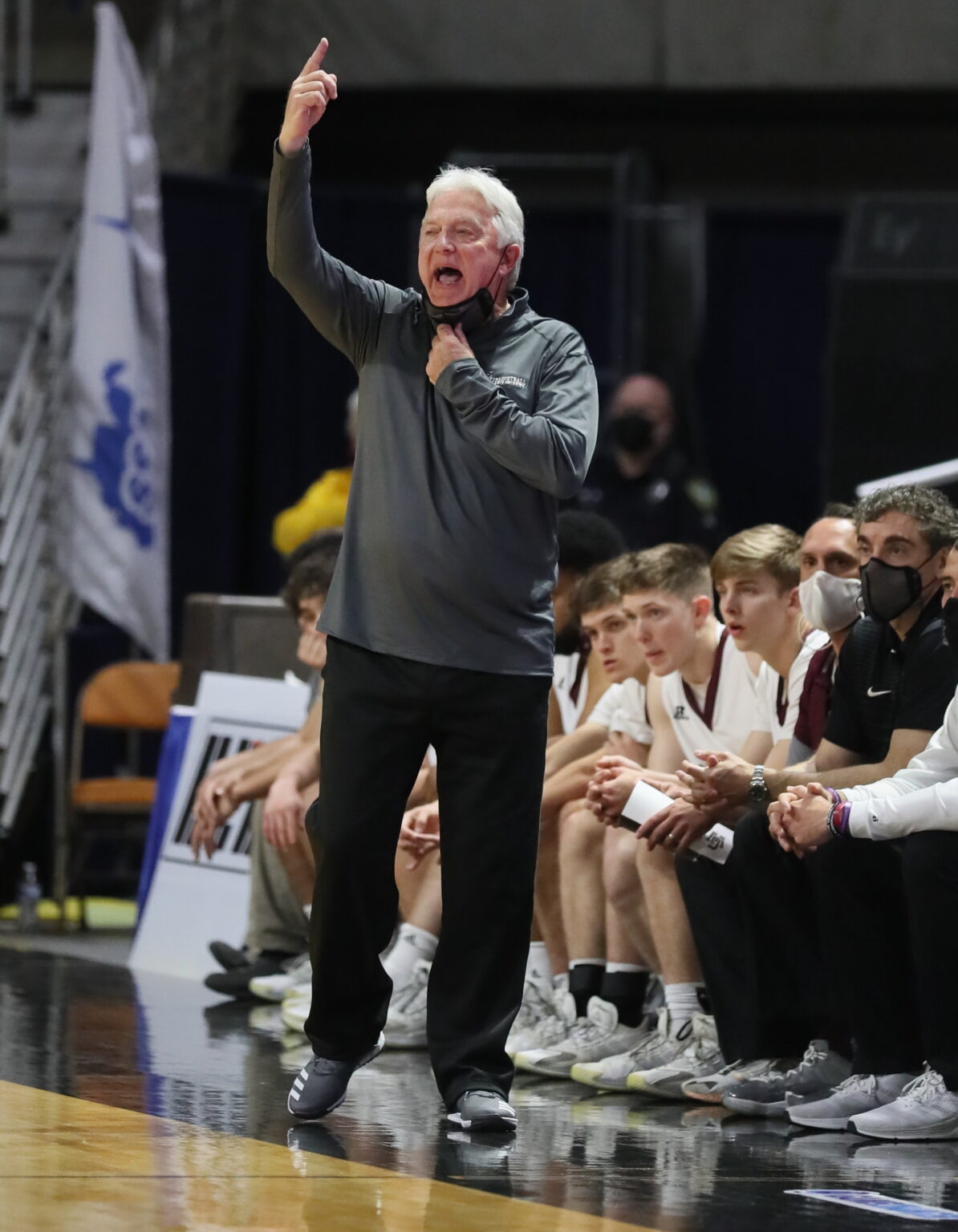 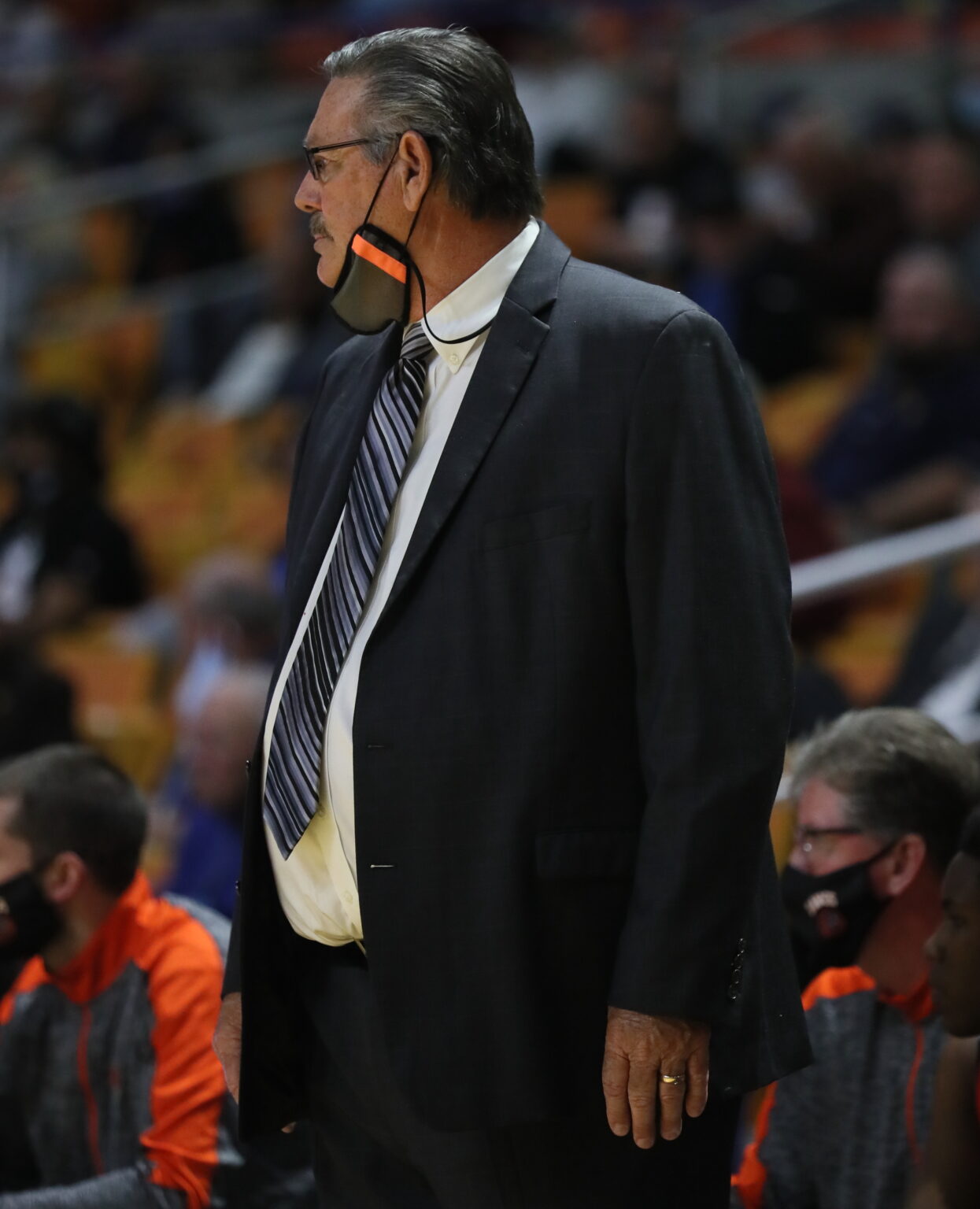 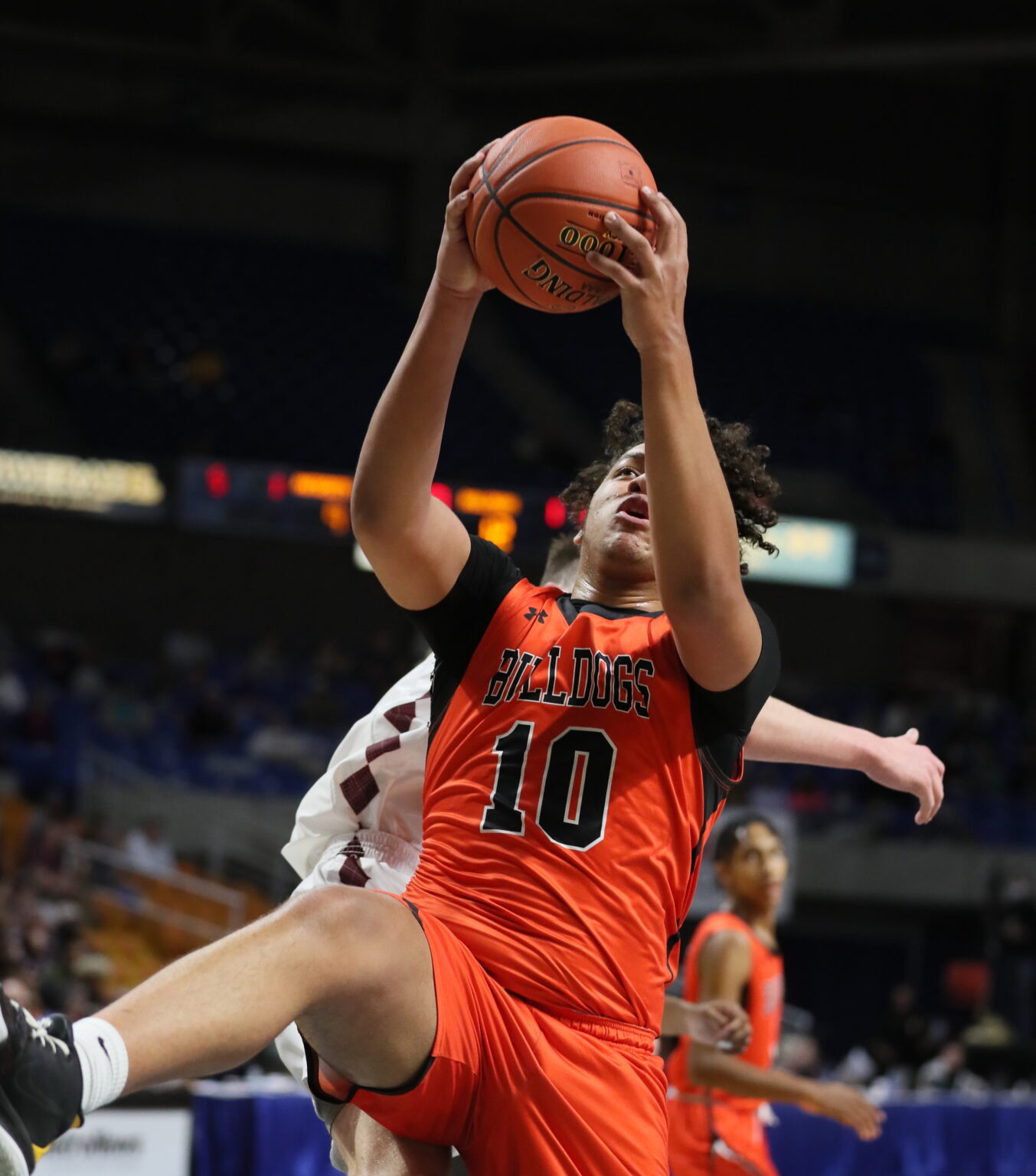 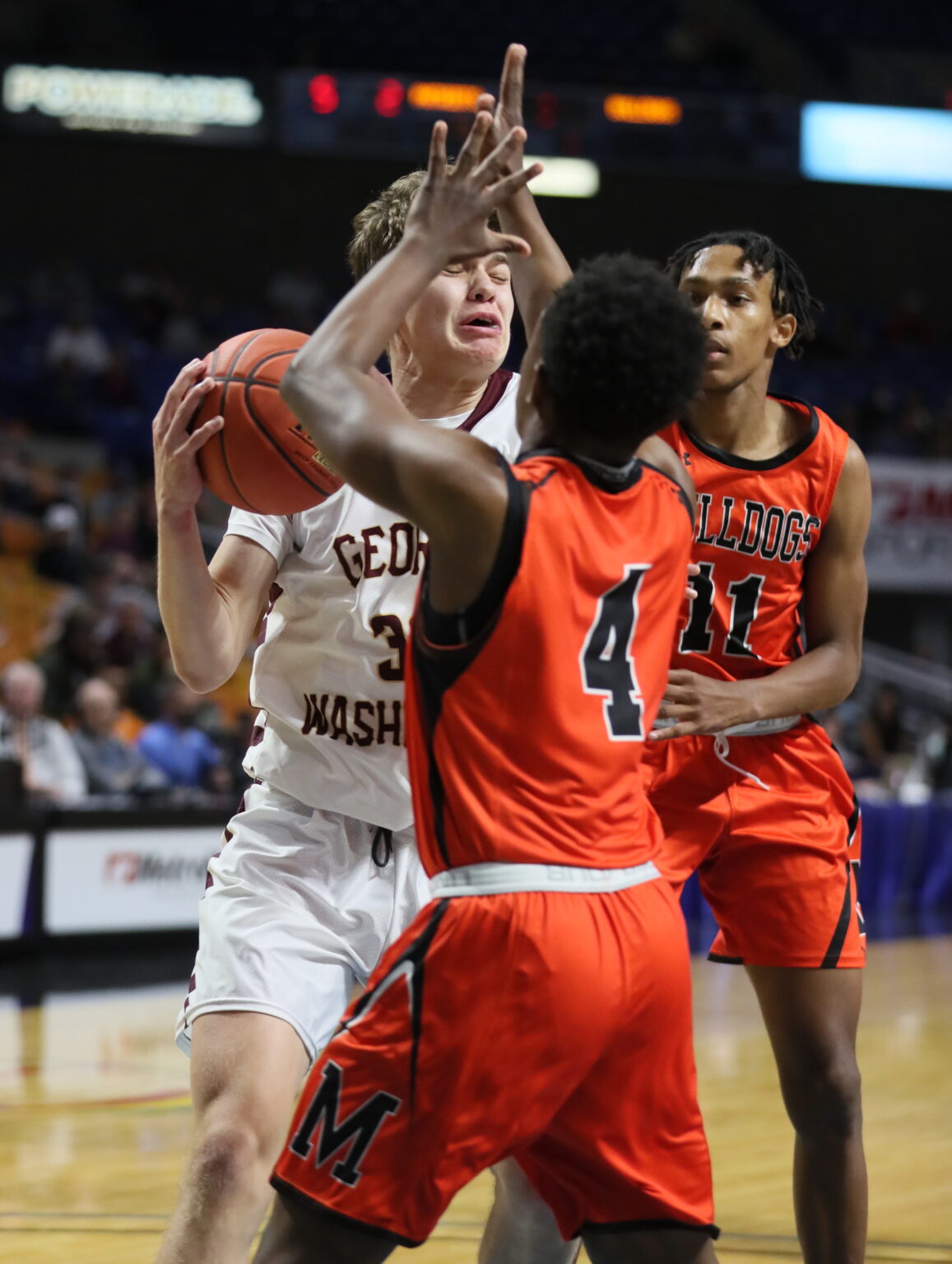 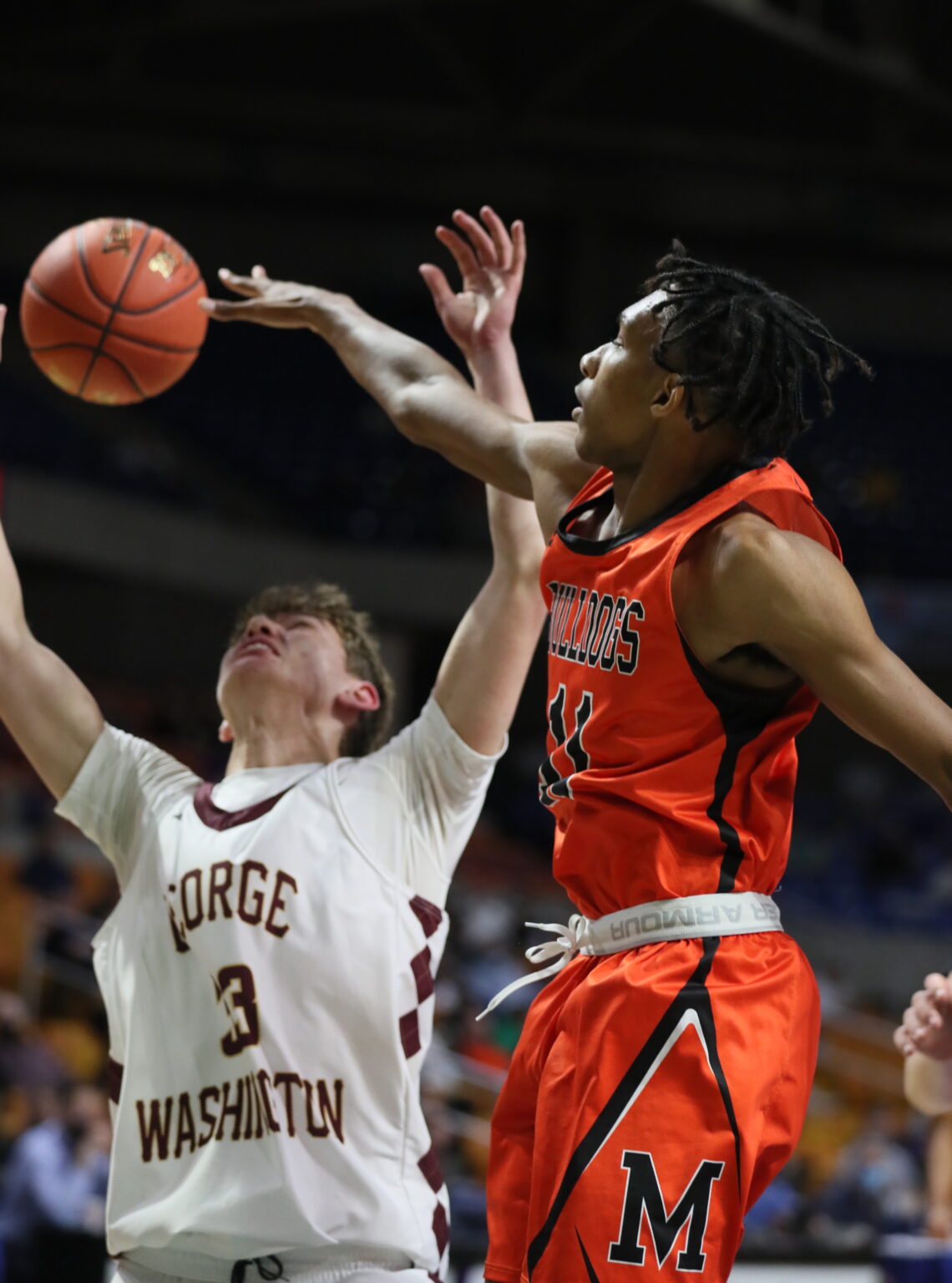 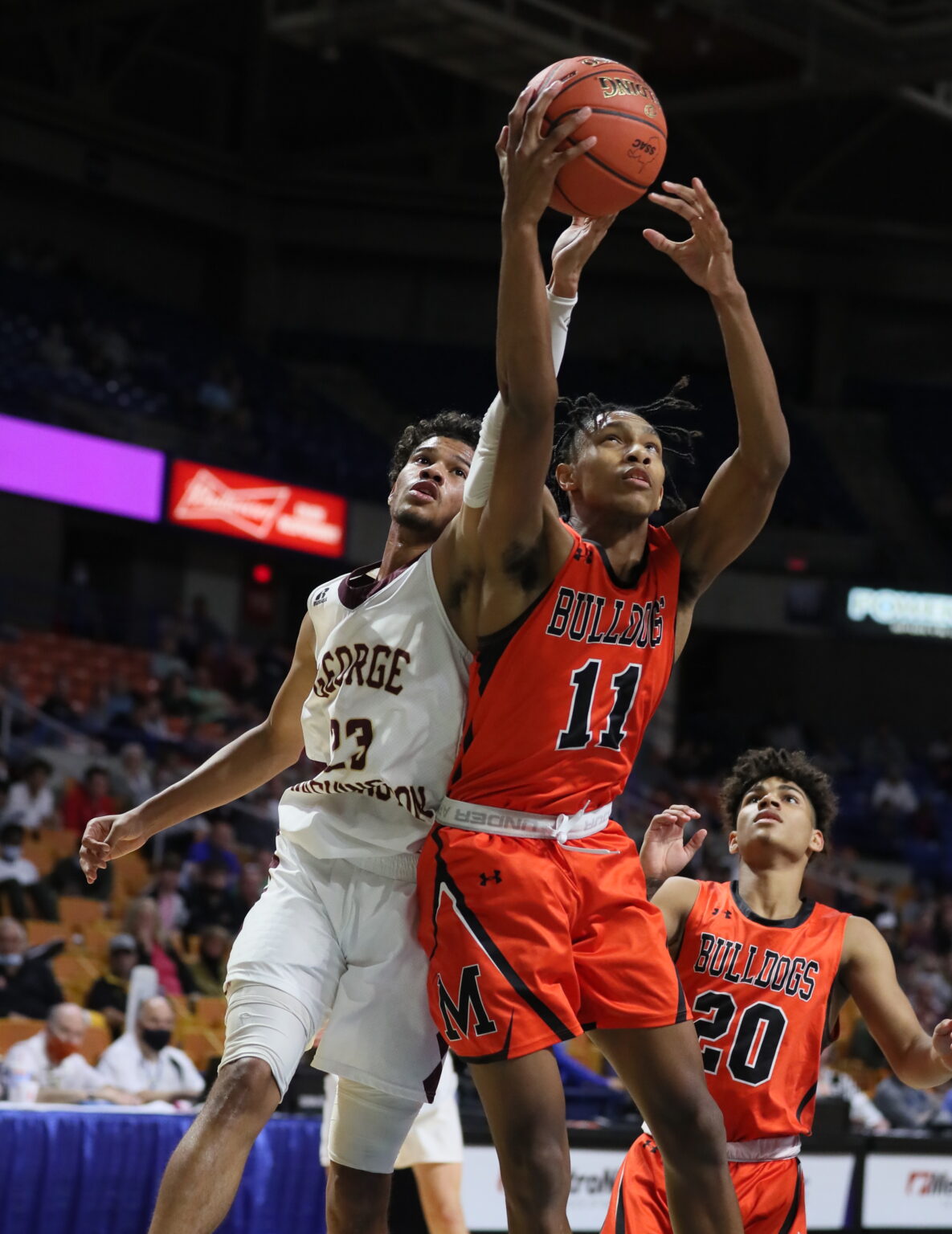 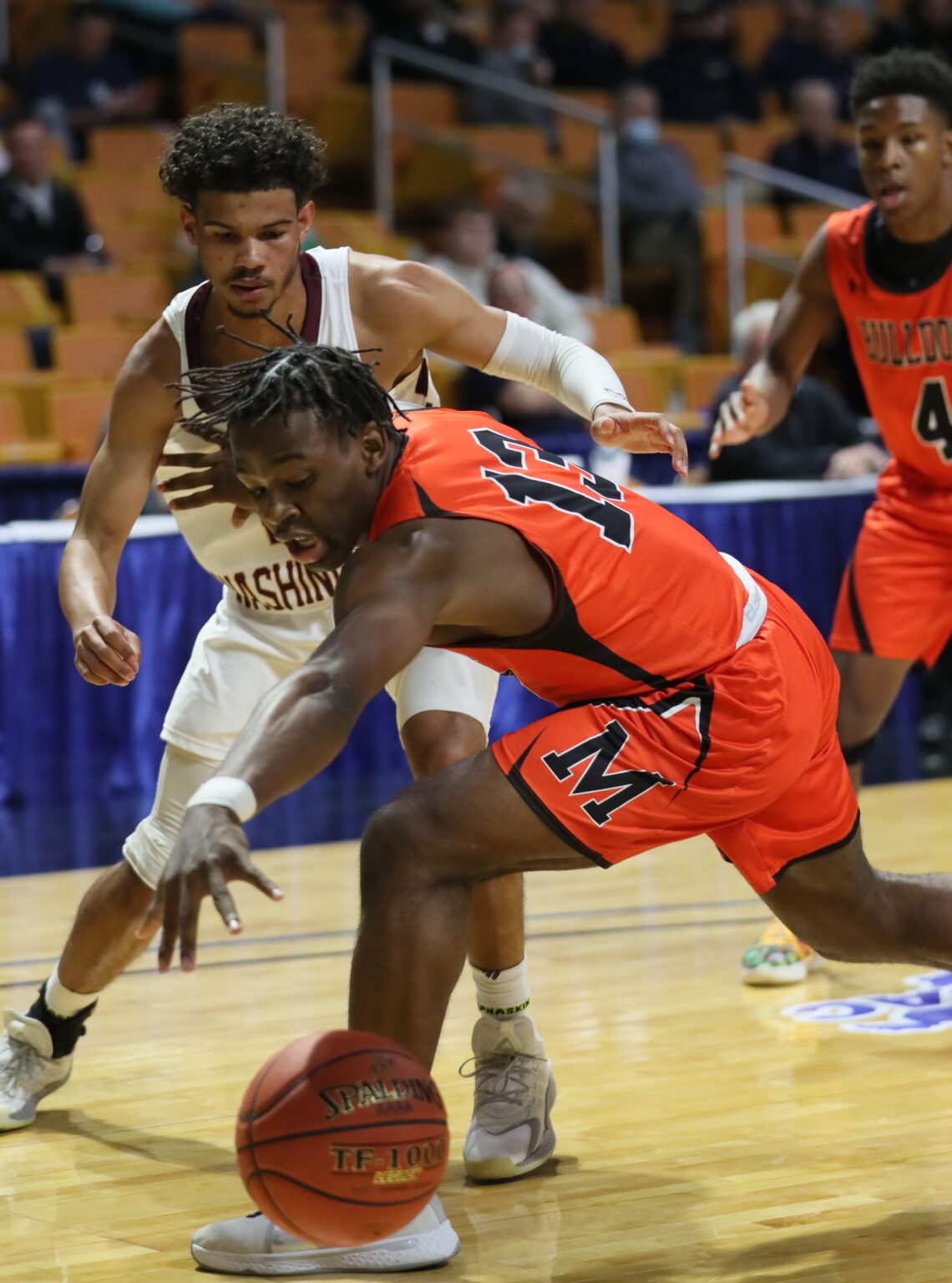 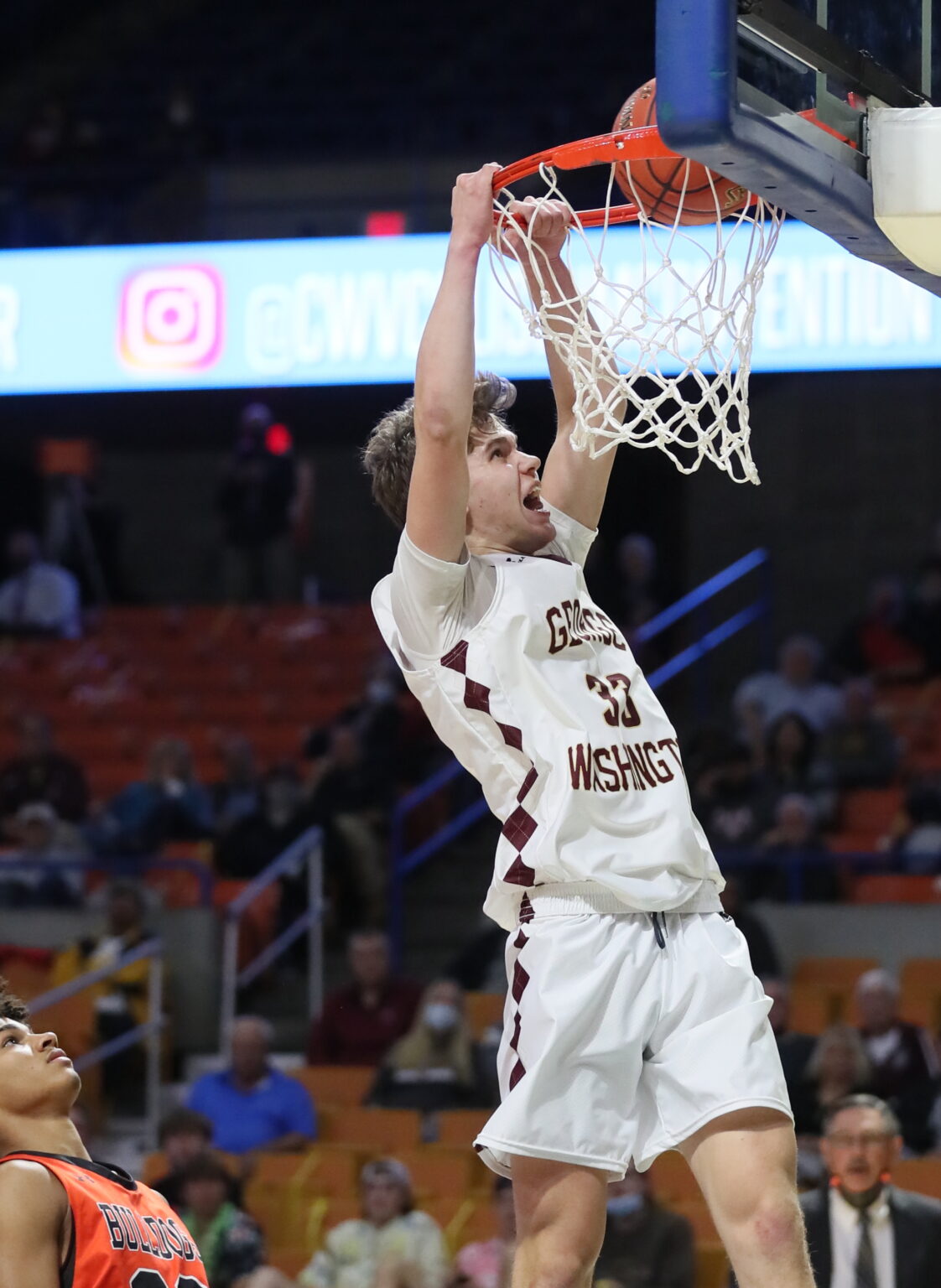 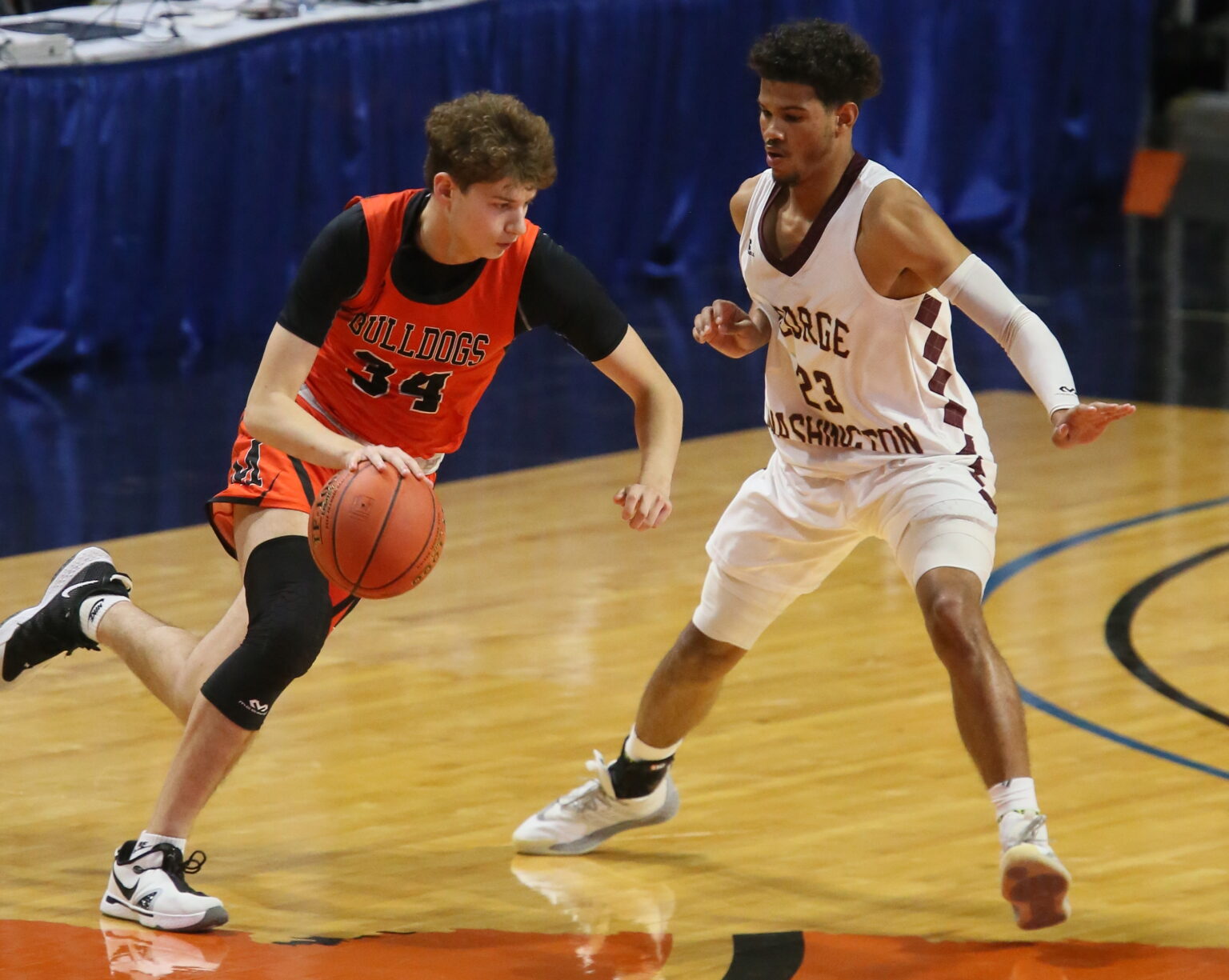 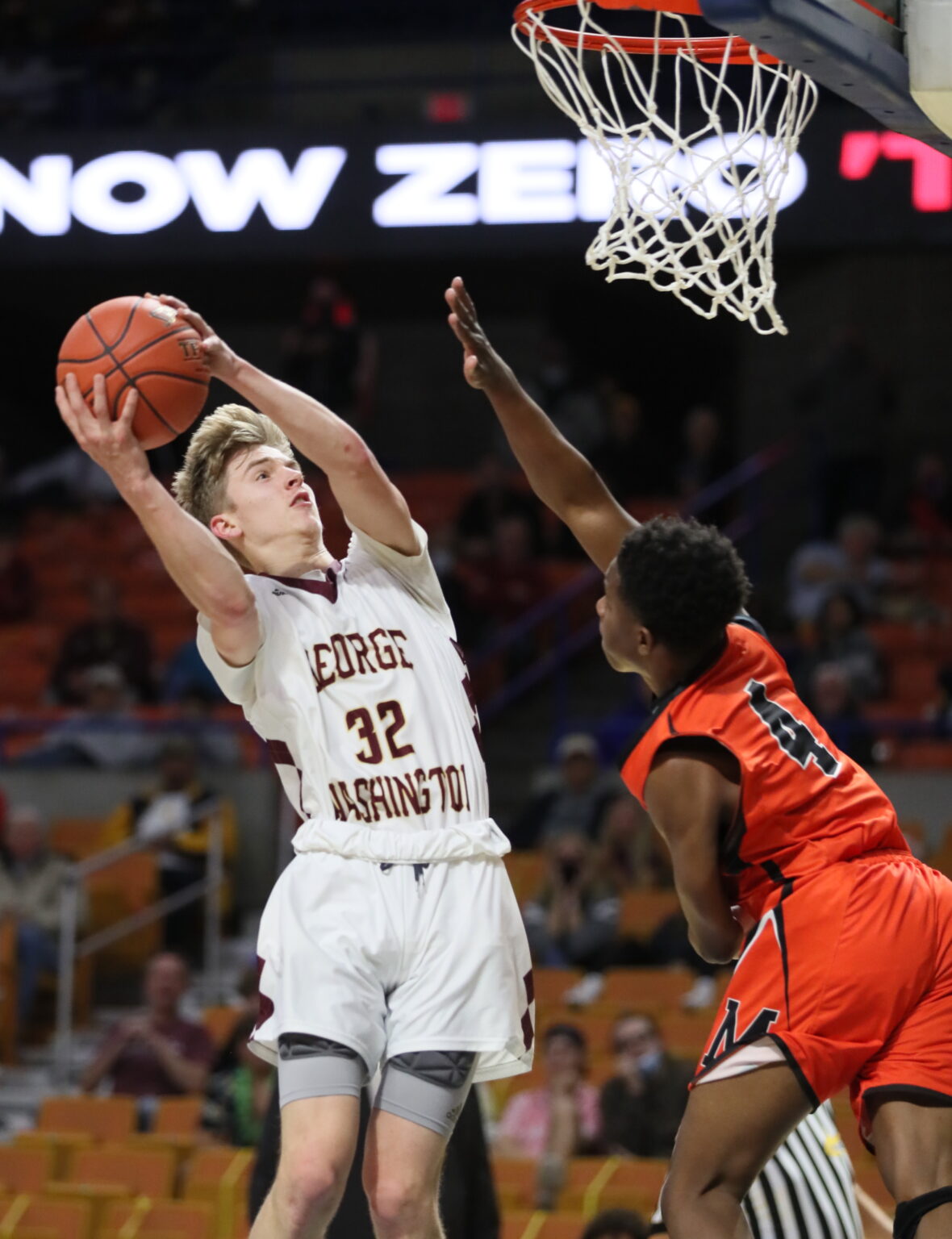 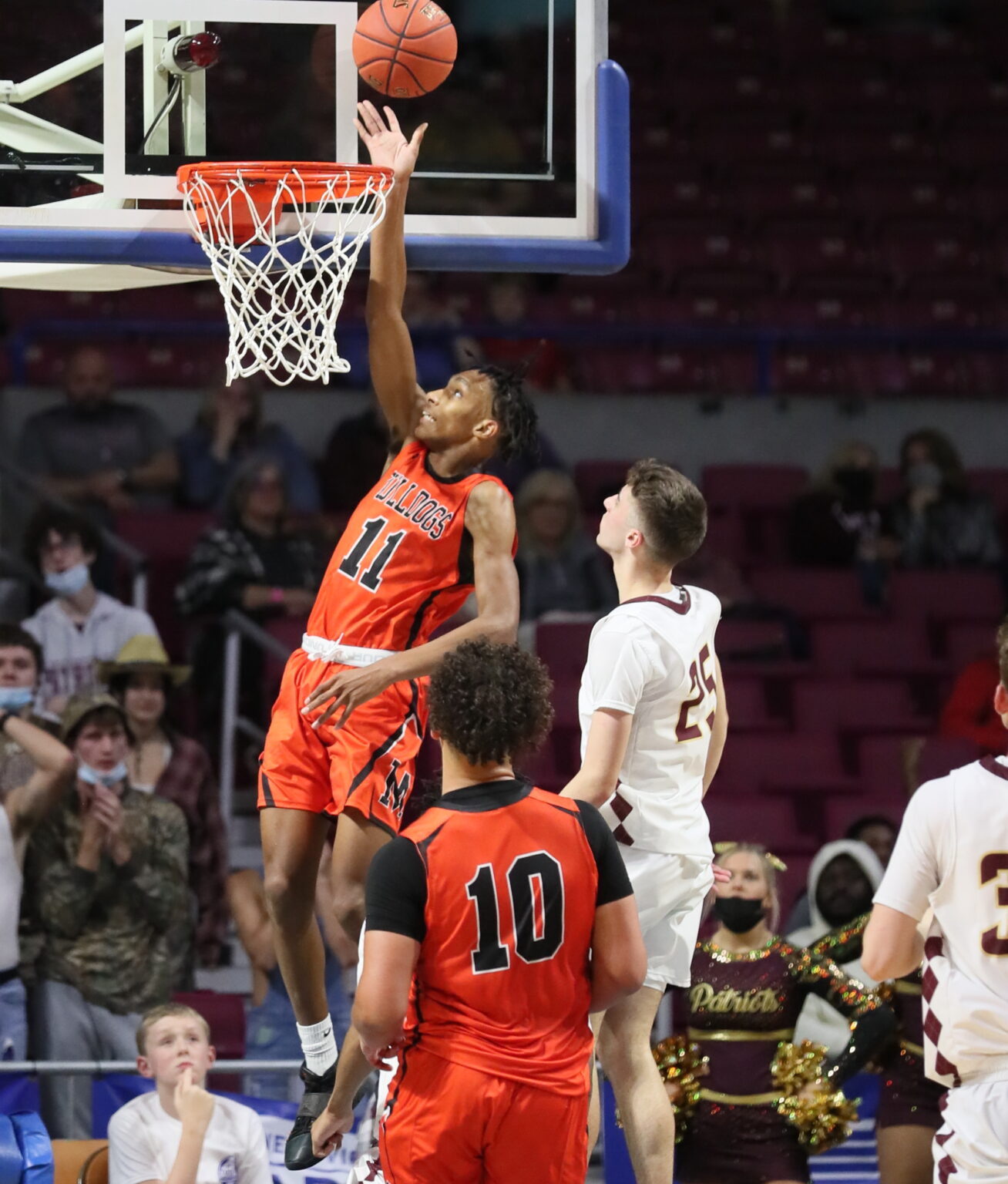 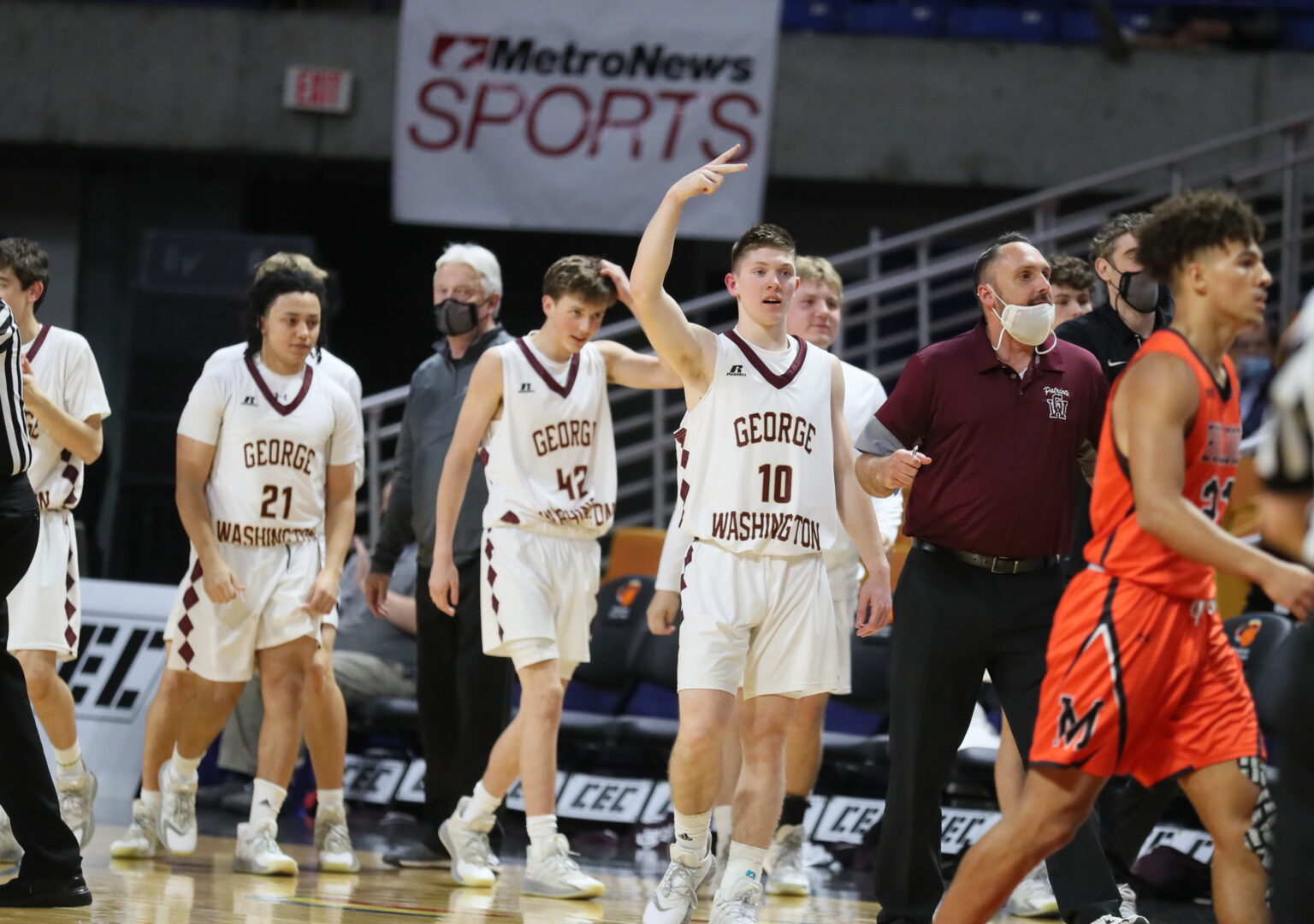 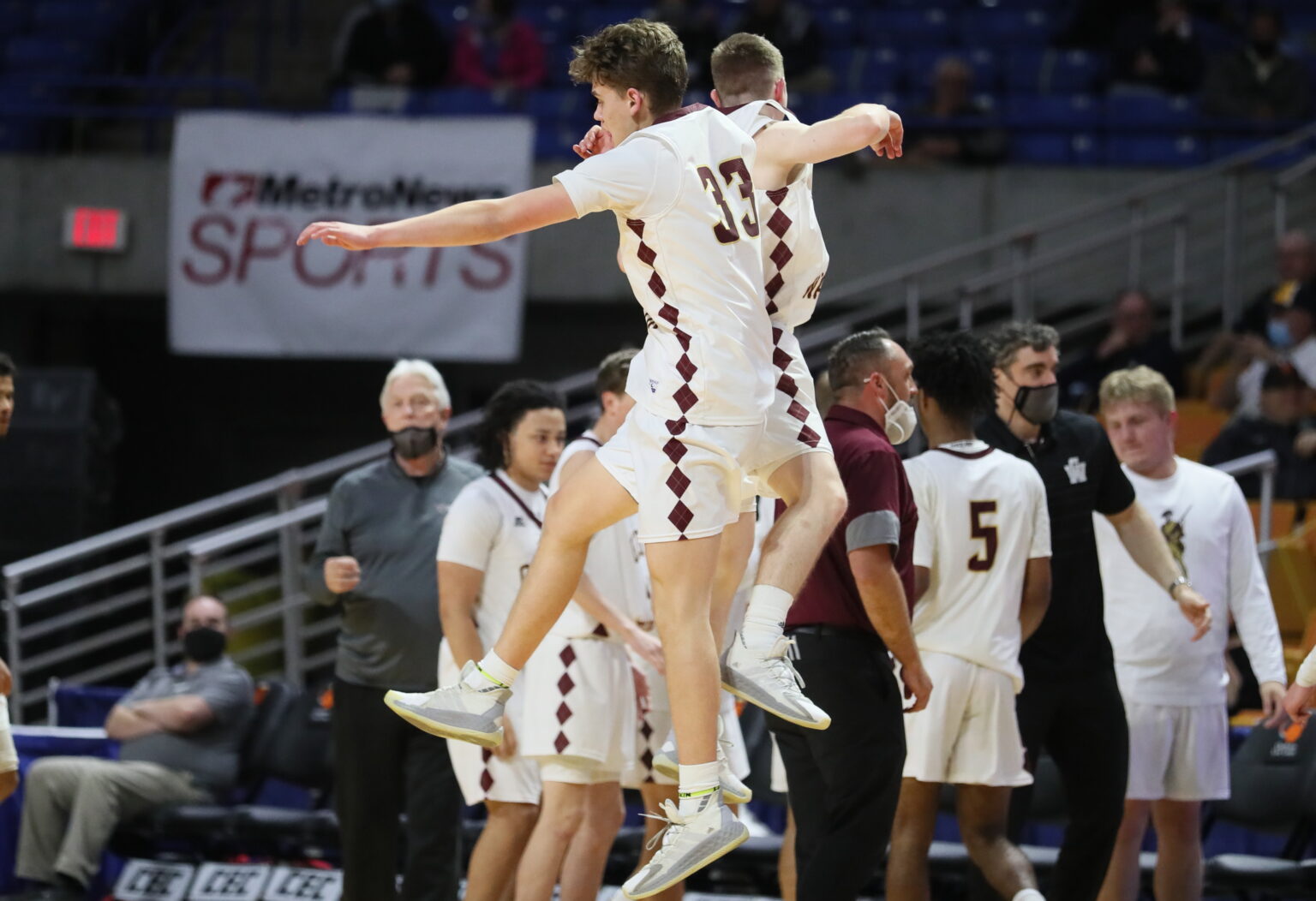 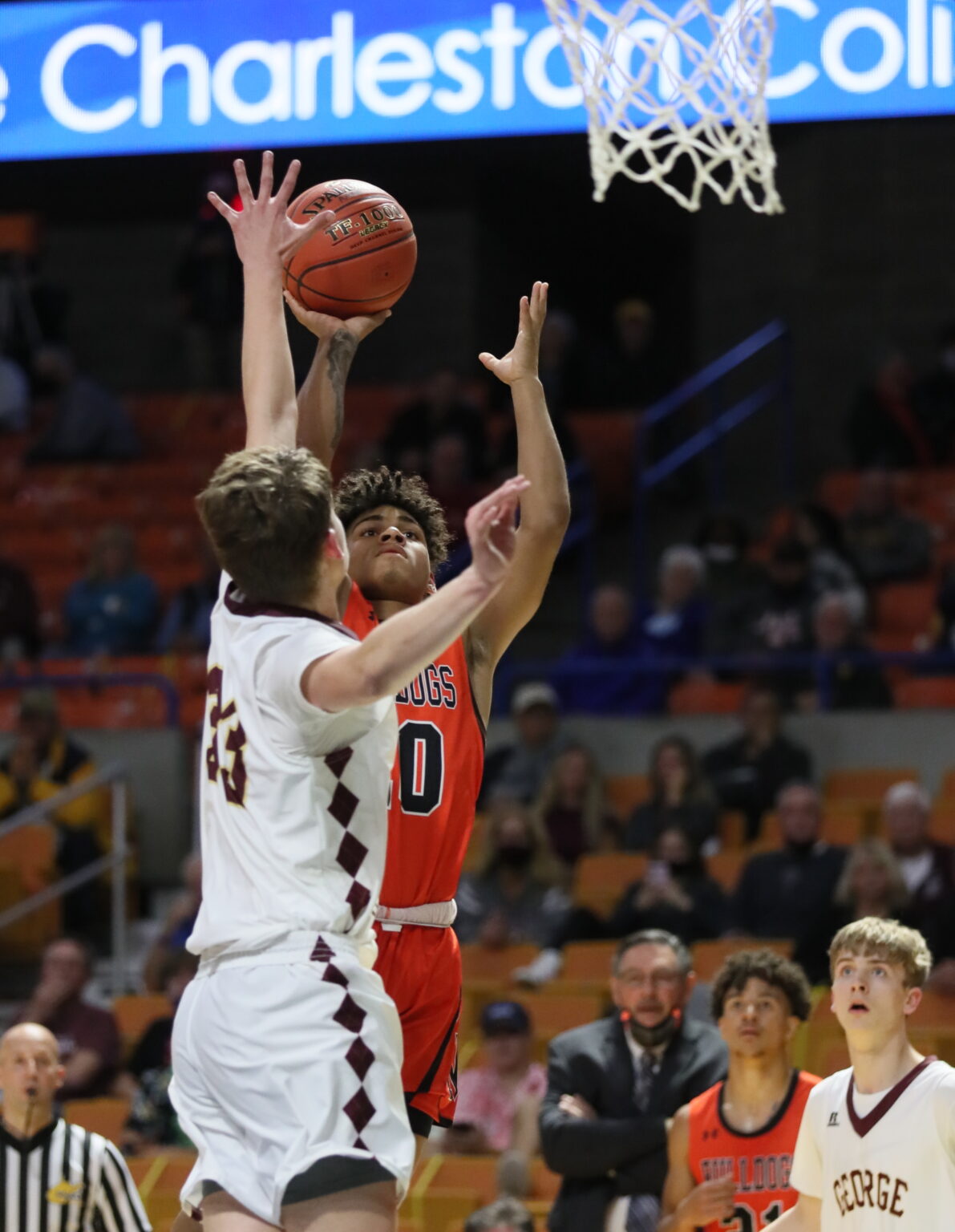 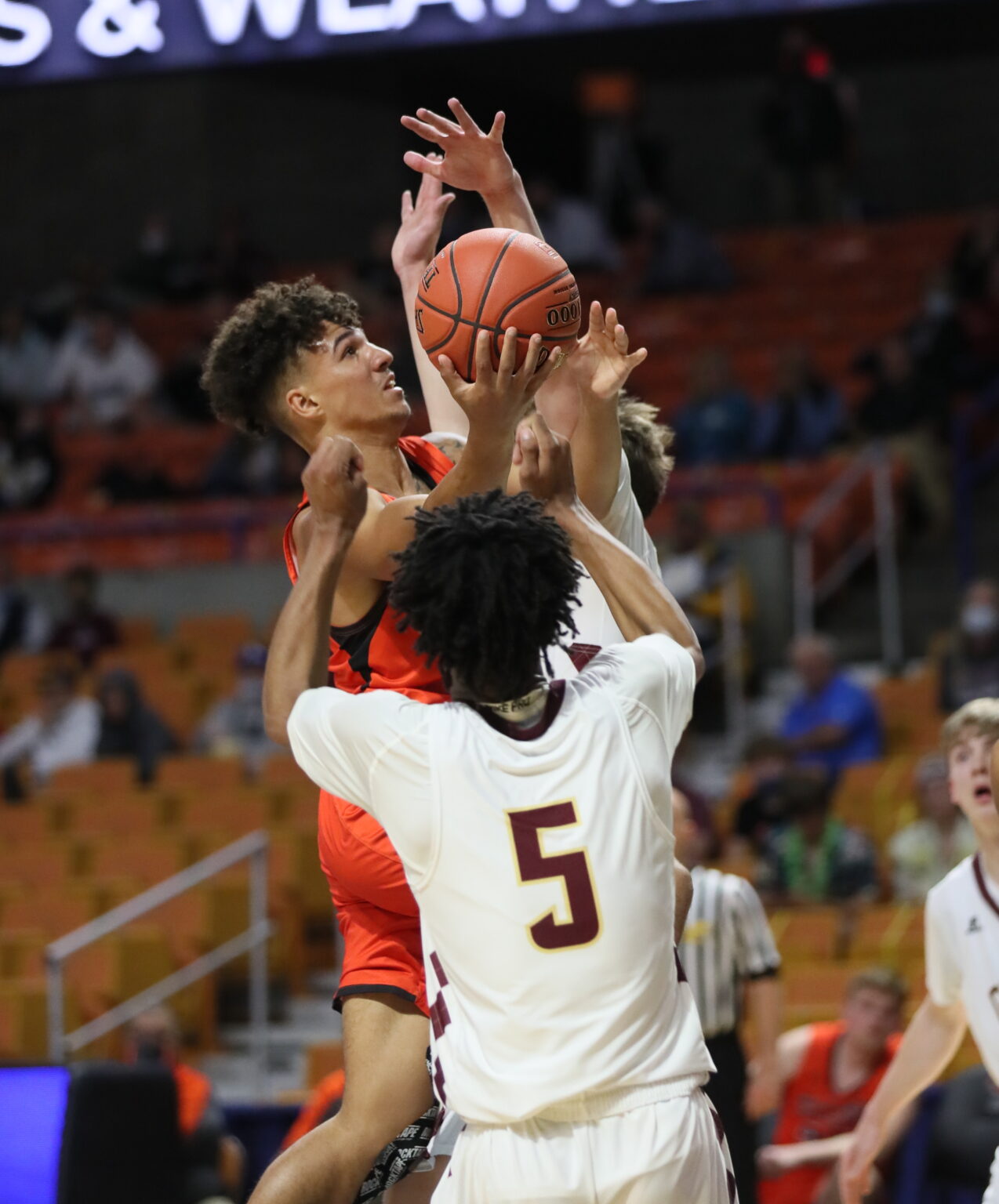 CHARLESTON, W.Va. — Much like George Washington’s win over Jefferson in a Class AAAA quarterfinal, the Patriots’ matchup with Martinsburg in Friday’s semifinal was a tale of two halves.

For the second consecutive day, GW trailed by six at halftime, only to rally for a double-digit victory — this one a 64-52 triumph over the third-seeded Bulldogs in the nightcap at the Charleston Coliseum.

“They’re really good and they played really well in the first two quarters,” Patriots’ coach Rick Greene said. “Fortunately for us, they cooled down and our kids picked it up defensively.”

Guards Mason Pinkett and Alex Yoakum were instrumental in helping the Patriots overcome a deficit that was as big as 13 in the second quarter.

“We came out playing extremely aggressive, did a great job running our fast break and it showed,” Rogers said.

GW answered with an 11-4 spurt to close the opening half and trailed 34-28 at the break.

The Bulldogs made 15-of-23 shots over the first two quarters, with five players scoring at least four points. Anthony Smith and Doryn Smith led the way with nine and eight, respectively.

“A little bit like last night, we seemed to start slow and then we got going and kind of kicked it in,” Greene said.

It didn’t take long for GW to seize momentum in the second half. Pinkett hit a jump shot to 23 seconds into the third quarter and Taran Fitzpatrick followed with a bucket, before Yoakum’s three-pointer gave GW a 35-34 lead — the first time it had been on top since 7-6.

Yoakum scored eight points the remainder of the third, while Pinkett had four more, giving the duo 17 of the team’s 19 points in the period.

“It starts with Alex and Mason and when they play close to that, we’re a really good team,” Greene said.

On the flip side, the Bulldogs were held to four points on 2-of-13 shooting in the quarter and faced a 47-38 deficit entering the fourth.

“The wheels came off a little bit in the third quarter,” Rogers said. “They started shooting the ball well and we missed shots.”

Martinsburg had a chance to trim what was a 42-36 deficit to four, but Doryn Smith missed a dunk and Yoakum connected on a triple on the following possession.

“That dunk could really get them juiced and then we hit a three, so it was a big swing in the game obviously,” Greene said.

Doryn Smith scored six points in the first 4:23 of the final frame, including a follow-up that cut his team’s deficit to 53-46 with 3:37 left.

But Martinsburg never got closer than seven down the stretch as Pinkett helped put the game away by going 6 of 6 on free throws over the final 3:02.

Despite being defended by a player not lacking athleticism or quickness in Anthony Smith, Pinkett finished with 23 points on 7-of-13 shooting, added five assists and had only two turnovers.

“He’s strong, quick and real athletic so I just wanted to do what I do on the offensive end,” Pinkett said. “Not let him startle me in any way and get me off of my game. Nothing he was doing was going to keep me from attacking.”

Yoakum also scored 23 on 8-of-12 shooting, including 4-of-5 from three-point range. Ben Nicol added nine points and six rebounds in the win.

Doryn Smith and Anthony Smith led the Bulldogs with 18 and 14 points, respectively.

Martinsburg shot 8 of 31 in the second half.

“I have nothing but praise for our kids,” Rogers said. “This is not what we wanted, but life will move on.”