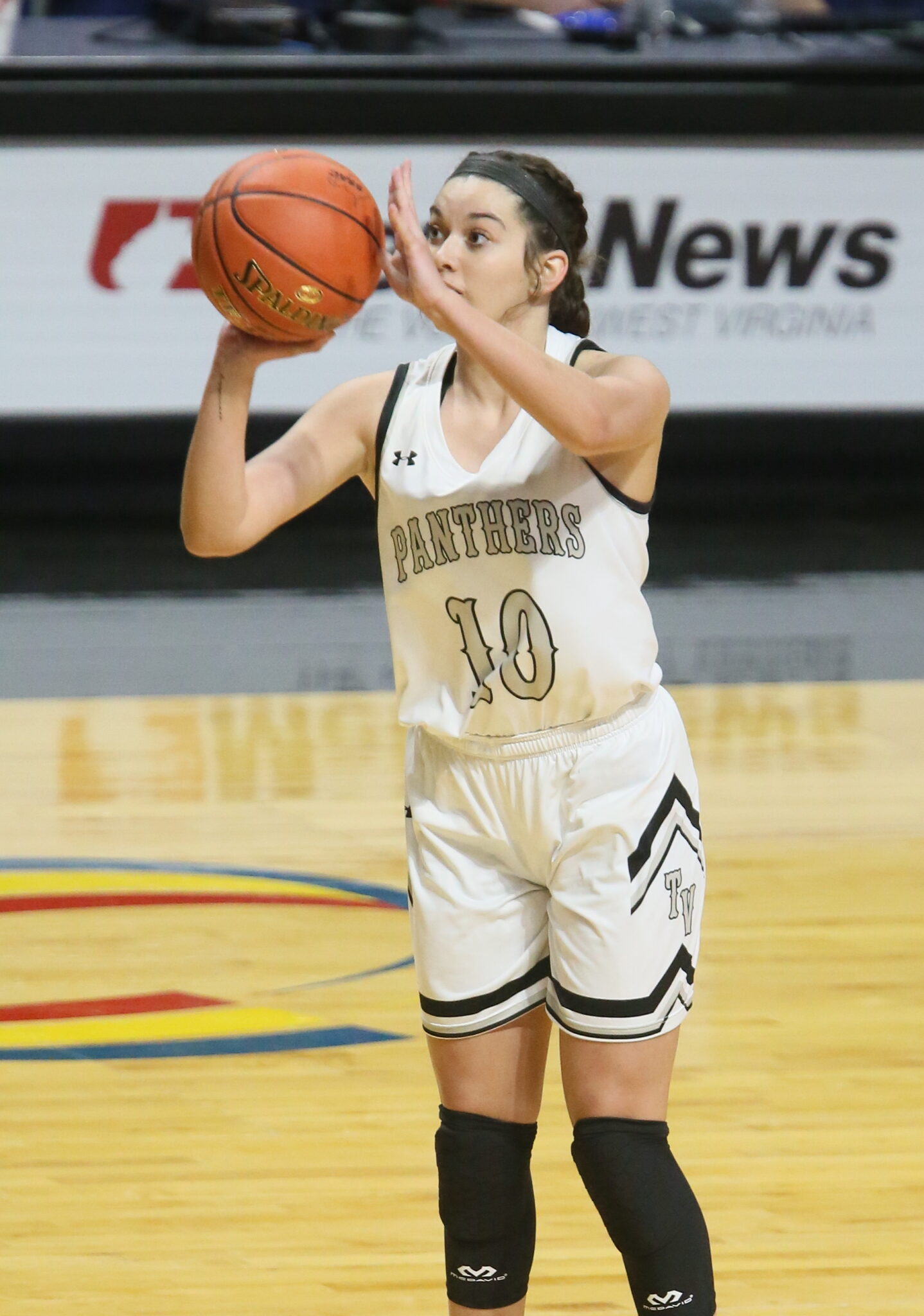 Tug Valley's Kaylea Baisden is captain of the Class A all-state team. Photo by Eddie Ferrari

NAUGATUCK, W.Va. — Just a little over a week ago, Tug Valley High School captured the first girls state basketball championship in school history with a 63-45 win over Cameron in the Class A title game.

The Panthers added another first on Tuesday as guard Kaylea Baisden has became the first female from Tug Valley to be voted the captain of the West Virginia Sports Writers Association’s Class A girls basketball All-State first team.

“We’ve had some first-team players before, but we’ve never had a first-team captain,” Tug Valley coach Clyde Farley said. “And my take on that, when they say first-team captain, is that they are saying you are the very best player in Class A basketball — and I think that she is.”

The junior had another standout season for the Panthers in 2021, finishing the year averaging slightly more than 17 points per game to go with seven assists and six steals per game.

Baisden averaged 20-plus points per game as a sophomore in garnering second-team honors, while she was named third-team all-state as a freshman.

Baisden guided the Panthers to a 15-2 record, their first state title, and had a breakout performance in her three tournament games at the Charleston Coliseum.

She averaged 25 points, eight rebounds, five assists, and four steals for the three tournament contests and broke the girls tournament record for all classes when she sank nine 3-pointers during the Panthers’ 67-24 win over Pendleton County.

“I surprised myself a little bit that first day,” Baisden said of her performance in Charleston. “This is definitely what I’ve worked for for most of my life.”

Baisden was joined on the first team by teammate Makayla May, who averaged a double-double for the Panthers. The senior finished the year with 14 points and 11 rebounds per game to go with four assists.

May and Baisden were the only set of teammates to garner first team attention and they were joined Cameron’s Lili Neely (17 ppg, 5.1 rpg), who helped guide the Dragons to a state runner-up finish.

Tucker County’s 6-foot-1 sophomore center Kadie Colebank (17 ppg, 10 rpg) and Calhoun County’s Jose Montgomery (20.3 pgg) were each voted to the first team after leading their team to an appearance in the Class A semifinals.

River View sophomore Trista Lester joined the first team after guiding the Raiders to the state tournament with an average of 13.4 points per game, while Gilmer County’s Carrah Ferguson rounds out the illustrious squad. The Titans were No. 1 in the Associated Press poll for much of the season and suffered a setback to Tug Valley in a regional co-final.

Captain of the second team iss Madonna senior Jazzy Melnyk, who averaged a double-double in 2021 and helped guide the Blue Dons back to the state tournament, with coach Cory Wingett calling her “his CEO on the court.”

The Class A Girls All-State Basketball Team as selected by the West Virginia Sports Writers Association: