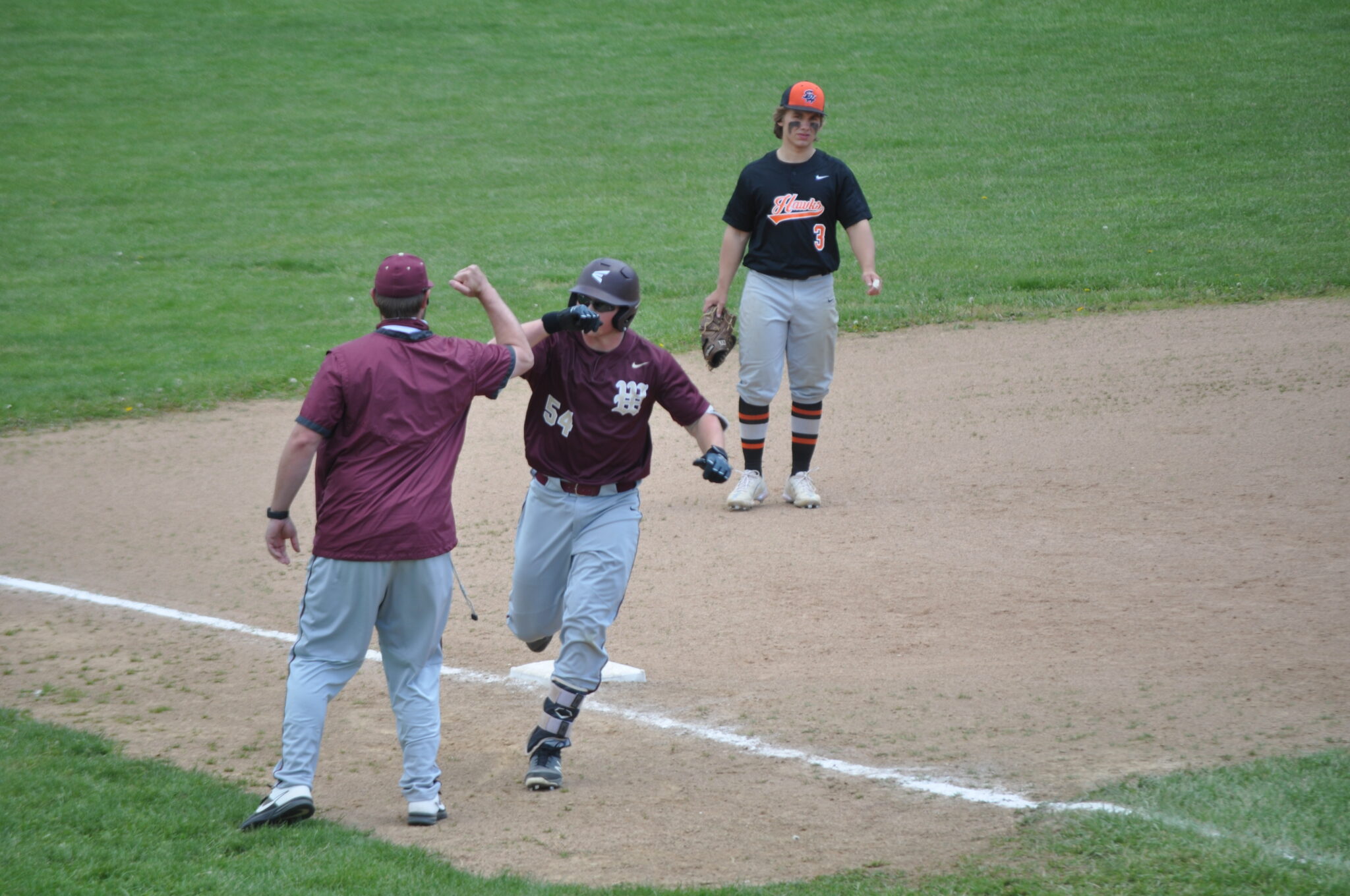 Williamstown's Leewood Molessa rounds third base after belting a two-run home run in a win at South Harrison. Photo by Greg Carey/WVMetroNews.com

LOST CREEK, W.Va. — Williamstown couldn’t have jumped on South Harrison any earlier than it did in Saturday’s contest as part of the McDonald’s Classic.

Yellowjackets’ leadoff hitter Maxwell Molessa hit a home run on the game’s first pitch, and Williamstown never looked back in an 11-5 road victory over the Hawks.

“We try to teach to play each inning as a game,” Williamstown coach Levi Maxwell said. “We try to win the first inning, win the second inning and so forth. Instead of making it one giant game, make it seven short games and try to win all those. That kind of changes our mentality to attack that inning and keep the energy up.”

Williamstown (8-5) finished with 10 hits, including a pair of home runs, and capitalized on five Hawks’ errors to ensure it never trailed.

Ethan Holbert’s fielder’s choice brought Leewood Molessa home for a second run in the top of the first, before South Harrison (9-7) cut its deficit in half on a Wyatt Shears sacrifice fly in the home half of the first.

But that was as close as the Hawks would get, with Chase Barkley working an effective complete game on the mound to pick up the win.

“Coming off a big win over Ravenswood yesterday, we scored eighteen runs, so we’re swinging the bat right now,” Maxwell said. “But we needed a pitching effort today and we got that out of Barkley.”

A South Harrison error in the third allowed Andrew Florence to score Williamstown’s third run, and the Yellowjackets doubled their lead to 5-1 in the fourth on a Leewood Molessa two-run homer to left-center field.

“We teach our hitters to attack,” Maxwell said.

Two more SH errors in the fifth, combined with Brady Ankrom and Holbert’s singles and a Maxwell Molessa sacrifice fly enabled the Yellowjackets to build their lead to 8-1.

“In the games that we’ve lost, we’ve given teams five outs an inning,” Hawks’ coach Frank Tate said. “I don’t care how good you are. It’s tough enough to get three outs. When you have to get five or six, it adds to it.”

Baylor Haught’s two-run single in the sixth highlighted a three-run inning for Williamstown that capped the Yellowjackets’ scoring.

The Hawks scored a fifth-inning run on Logan Ross’ single, a sixth-inning run on Nathan Radcliff’s groundout and two more in the seventh on a Ross double and a wild pitch that brought Ross home.

Barkley allowed six hits, issued one walk and did not record a strikeout in the complete game victory. He induced 15 outs in the air.

“We were popping everything up,” Tate said. “At this level, you can’t do that, because those are easy outs. You saw what happened when we hit line drives and hit the ball on the ground. They had trouble fielding it and we found gaps.”

Joshua Thomaschek took the loss for the Hawks after allowing eight runs on nine hits in four-plus innings.

South Harrison responded to its loss to the Yellowjackets with a 15-9 victory over Ritchie County, allowing the Hawks to improve to 10-7.

The Hawks sent 12 batters to the plate in the third inning against the Rebels and led 11-4 after the frame.

Shears finished 3-for-4 with a pair of doubles, RBIs and runs, while Thomaschek was 2-for-2 and scored four times. Radcliff added three RBIs and Justin Herrod connected for a run-scoring triple in the win, which went to Ross after he pitched 5 1/3 innings.