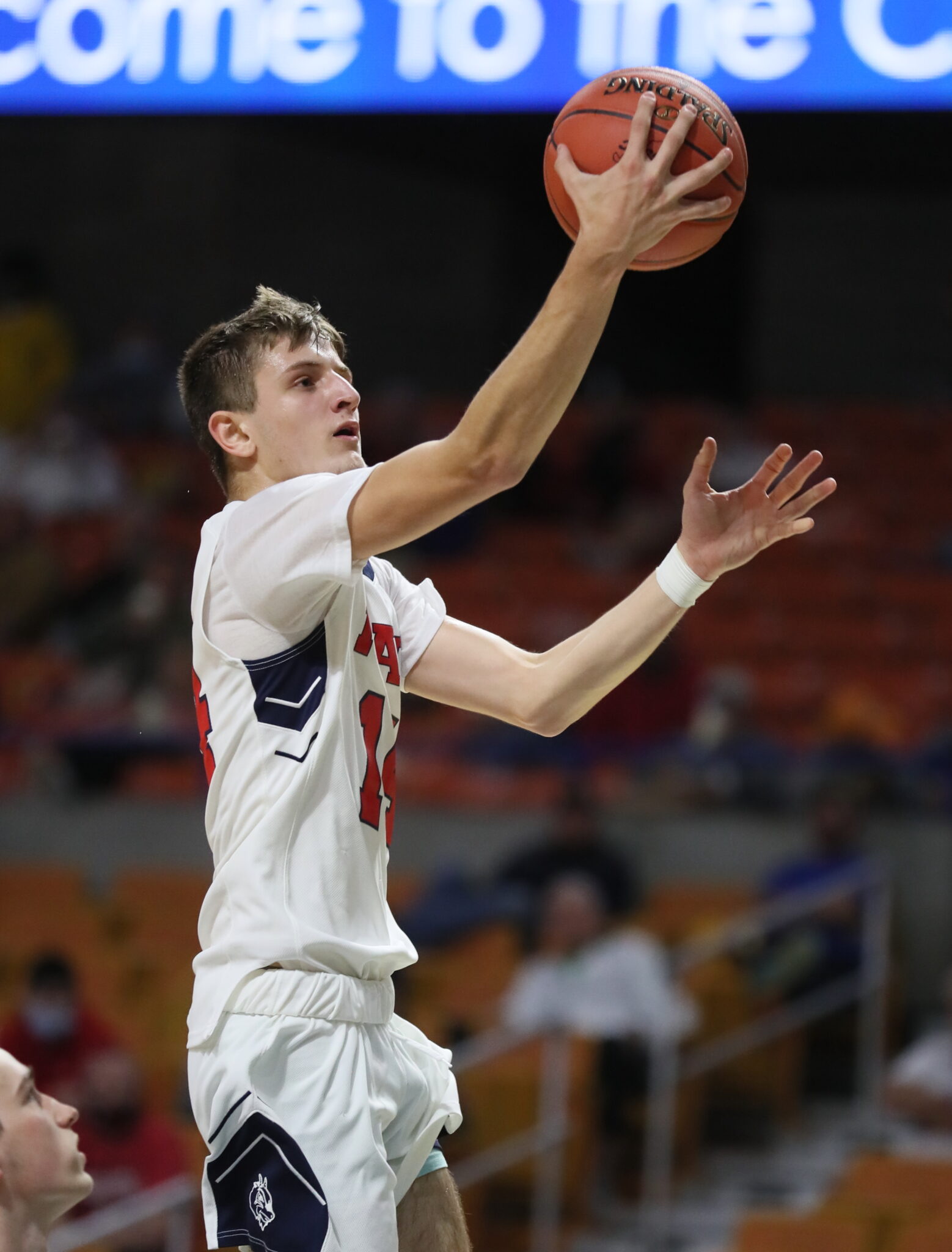 Man's Austin Ball is captain of the Class A all-state team after leading the Hillbillies with 20 points per game. Man captured the Class A championship. Photo by Eddie Ferrari

— By Tyler Jackson, The Register-Herald

Austin Ball wasn’t a name known in many corners of the state a year ago.

That’s not the case anymore.

A matchup nightmare, the 6-foot-7 forward lit the state on fire, guiding Man to a 13-2 record heading into the state tournament and, eventually, the Class A title game.

“He’s the one that I stay on every single day of practice,” Man head coach T.J. Blevins said. “I’m probably the hardest coach on kids. I’ve been at the college levels so I see what it takes for him to get there. So I point out everything that I can. We call him Groot and we go as he goes. At halftime of that championship game, we told him it was go time and his time to shine. We needed him to lead us and he responded.”

The senior scored 20 points in the title game — right at his season average of 19.5 points per game — to help Man capture its first championship in program history.

Ball’s success hasn’t stopped there. He’s been named captain of the Class A first-team all-staters by the West Virginia Sports Writers Association.

Though the Hillbillies struggled to get to Charleston since Ball arrived on campus, it wasn’t for lack of trying. Playing in Class AA, Man was continuously paired against the likes of Chapmanville and Logan and finished last year with an 18-6 record. That never deterred the junior from working on his game with the four other juniors in the Hillbillies’ starting lineup.

In fact, he was prepared when Man dropped to Class A this past year and took advantage.

“I’ve had these guys since they were very, very little,” Blevins said. “I don’t know what it is, but you can see a special group coming up, but with the buddy league system here, they’re all spread out. I took the kids that are playing now and just rolled with them year in and year out. Austin kind of stood out, though.

“We call him Groot because he’s always been so tall and skinny, but even over the last two years you could see him progress through the middle and high school ranks. We’ve played against some tough teams and it’s made him better. He’s the kind of kid that stays playing somewhere. If there’s a gym, he’s usually in it and that’s why he’s as good as he is. I’m thrilled for him to get this honor.”

Sauvage, a junior, was a sharpshooting nightmare for the Mavericks, who, much like Man, played in a tough region in Class AA before dropping to Class A this season. Sauvage averaged 21.8 points per game, nailing more than 70 three-pointers for the two-loss Mavericks.

His teammate Allen completed the dynamic 1-2 punch. Growing six inches this past offseason, the 6-foot-3 sophomore averaged 16.7 points to go along with 7.5 rebounds, 3.2 steals and 8.6 assists per game. As the team’s point guard he feasted on smaller opponents, using his size to drive to finish at rim and dish out when defenses collapsed.

Pack capped a standout career at Greenbrier West by leading the Cavs to their second state tournament berth in as many tries after a 27-year hiatus beforehand. The senior was a 1,000 point scorer and nailed a three-pointer against James Monroe at the buzzer in the regional co-final that forced overtime.

West finished the job in the extra period to earn a state tournament berth. Pack averaged 20.6 points, 6.9 rebounds and 4.8 assists per game.

Gadd followed a similar path, helping Webster to a sectional championship and an overtime regional win against Greater Beckley Christian. He didn’t stop there, leading the Highlanders to the state semifinals, where they eventually fell to Man. Gadd averaged 22 points, eight rebounds and 2.1 steals per game.

Strode was an efficient player for Tyler Consolidated. He averaged 18.4 points to go along with 10.6 rebounds per game. He shot 51 percent from the field, blistering the nets from downtown as a 44 percent shooter from behind the arc.

Tug’s Caleb May consistently made his case to be a first-teamer all season. He out-dueled Pack on the road to open the season, beat Greater Beckley at home, helped upset Man in the sectional championship and carried Tug to a victory over Cameron in the quarterfinals. He finished averaging 24 points per game.

Beresford, a 6-foot-7 forward, guided Cameron to the state tournament as a force in the paint. The junior averaged 15.4 points, 9.6 rebounds, 3.4 blocks and 2.1 assists per game. He was also an efficient scorer, connecting on 59 percent of his shots.

CLASS A ALL STATE TEAM