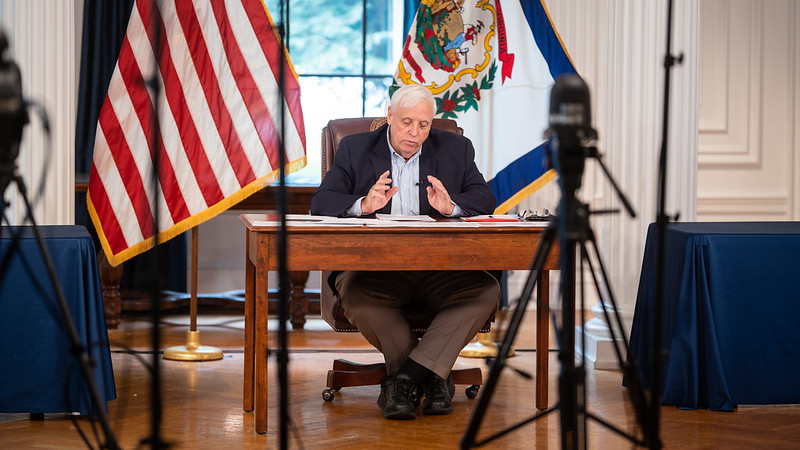 Gov. Jim Justice confirmed today that he is personally liable for millions of dollars his family’s coal companies took out from a financial services company that collapsed.

“Yes, I did personally guarantee the loans,” Justice said in response to a MetroNews question during a briefing today.

Today’s briefing was the governor’s first time to publicly address how his family’s businesses are being affected by the failure of Greensill Capital, which focused on supply chain financing. The financial services company abruptly announced its bankruptcy this spring.

The 2018 loans were backed by Justice and his wife, Cathy, to unlimited amounts, The Journal reported. Bluestone’s chief executive, the governor’s son Jay Justice, guaranteed the loans to a certain amount, the newspaper reported.

The Journal reported that Greensill packaged such loans and sold them to investment funds managed by the financial services company Credit Suisse.

Credit Suisse is now pressing to recover lost investments and has has named Justice’s Bluestone Resources as one of three major borrowers from the Greensill funds. That amount was $850 million.

Justice’s companies, in turn, have sued Greensill — accusing the company of “continuous and profitable fraud.” The lawsuit notes that Governor Justice has a 60 percent ownership interest in Bluestone Resources. Cathy Justice is also listed as a plaintiff.

.@JBSteins joins @HoppyKercheval to discuss the story about Governor Justice on the hook for nearly $700 million in loans. WATCH: https://t.co/wkudfIRZCB pic.twitter.com/o0ldZzHOEN

The governor today acknowledged the stress of the situation but laid fault with Greensill.

“If you knew all the details, you’d know that evidently Greensill is a bad, bad actor,” Justice said.

“And almost in partnership with that you’ve got the Credit Suisse people that were tied at the hip with Greensill that we didn’t know anything about. How in the world could we have ever known whatsoever. We’ll have to get through it.”

Justice said the loan was necessary because the Bluestone’s operations had deteriorated while during the time it was owned by the Russian company Mechel. Justice sold the family’s coal operations to Mechel in May 2009 for $568 million and then bought the company back in 2015 for $5 million.

“We took over and we’ve been building them back,” Justice said today.

The governor acknowledged conversations with his family about the enormous debt.

“I’ve had to review this with my family. What was going on what the rebuilding of Bluestone. We knew it would take hundreds and hundreds of millions of dollars to rebuild Bluestone,” he said.

“We’ll continue to pay our obligations and move forward. But this one is a bad, bad, bad actor that got caught. We didn’t have one earthly clue. It’s terribly unfortunate and something our family will have to deal with.”

Over the years, Justice has been described as West Virginia’s only billionaire. But Forbes removed the governor from its official list of billionaires after the $850 million debt to insolvent Greensill came to light.

Justice never has placed all of his assets into a blind trust. He does produce an annual financial disclosure form that includes more than 90 businesses. All along, he has said he has put Jill, in charge of The Greenbrier and Jay in charge of the coal operations.

Early in his time in office,  he produced a letter to state employees. It said he would like to pursue a blind trust but the process had been slowed by the size of his business portfolio.

“I’ve separated myself from my business holdings by putting my children in charge of our family’s business operations. Being Governor is a full-time responsibility,” Justice wrote in his 2017 letter.

“I want to put all of my assets in a blind trust; however, the process has been slowed down by the multitude of financial institutions that work with my family’s companies. I will continue to file very detailed ethics reports, just like during the election, which lets everyone know about my family’s businesses and investments.​”

“I’m here doing exactly what I do and I do every day, and I’m proud to do it. That’s what I’m going to continue to do. I’m going to be your governor.”