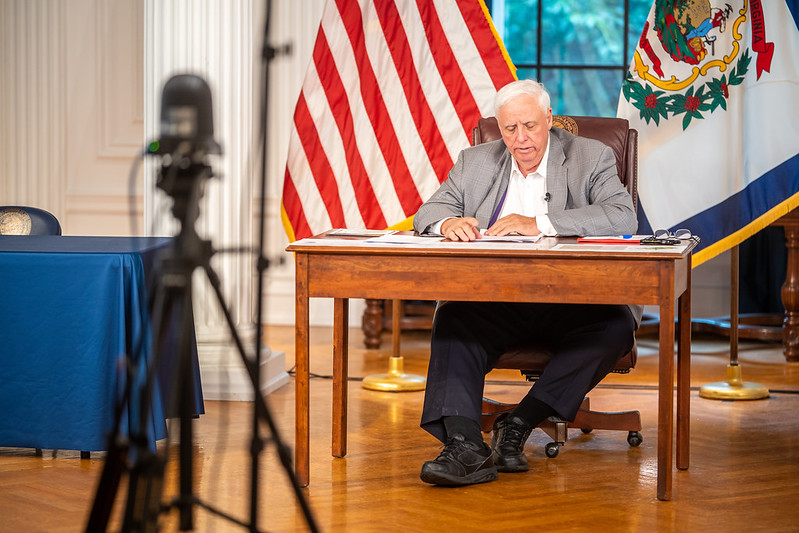 Gov. Jim Justice and his companies have amended a complaint against bankrupt Greensill Capital to say the governor and his family never would have personally guaranteed hundreds of millions of dollars in loans if they’d had any idea how shaky the lender’s finances were.

The amended complaint follows a Wall Street Journal scoop that the governor is personally on the hook for up to $700 million in debt. Justice confirmed the personal guarantee this week during a regular news briefing.

Credit Suisse is now pressing to recover lost investments and has has named Justice’s Bluestone Resources as one of three major borrowers from the Greensill funds. The amount left on the loans is $700 million.

Justice’s companies, in turn, have sued Greensill — accusing the company of “continuous and profitable fraud.”

The personal risk wasn’t explicit in the original Justice complaint in federal court.

The complaint now makes clear that the governor, first lady Cathy Justice and son Jay Justice, the chief executive of the family’s coal operations, executed a series of personal guarantees in 2018.

The Justices allege they did so under the impression that the loans were part of a long-term financial relationship, not one that would end abruptly. The Justices say they were told repayments wouldn’t begin until 2023 at the earliest.

Family members also say they had no way of knowing Greensill’s financial structure when they took on the personal risk.

“At no time prior to February 2021 did Plaintiffs have any understanding or knowledge of Greensill UK’s own sources of financing or that the Financing Programs were implicated in such financing arrangements,” the lawsuit now states.

“Had Plaintiffs known that the Enterprise Financing was a short-term financing, effectively callable at will, Plaintiffs would have never agreed on signing the personal guarantees.”

This past February, the lawsuit indicates, is when the Justices learned for the first time what pressure Greensill was under from Credit Suisse. At that time, the Justices say, Greensill began applying pressure to pay down the loans.

On Feb. 20, the lawsuit states, a Greensill executive met in White Sulphur Springs with the governor and Jay Justice to demand Bluestone pay $300 million by the end of the third quarter.

Less than a week later, Feb. 26, the same executive demanded repayment of a much bigger amount, $850 million, the total original amount of the loans.

This pressure was being applied while the annual legislation was under way and as the governor continued to make significant decisions about the best way to steer West Virginia through the coronavirus pandemic.

Only a few weeks before all that pressure over debt, Jan. 28, the governor had signed a West Virginia Ethics Commission financial disclosure statement — and marked a box saying he owed no debts to speak of.

Among the exceptions to marking the box was “debts resulting from your ordinary conduct of your business, profession or occupation.” And another was “debts to a financial institution.” Asked this week about being on the hook for $700 million, the Ethics Commission simply pointed to the list of exceptions and noted that there has not been a formal advisory opinion addressing the exceptions.

The governor has addressed the debt several times this week when questioned in regular news conference that are meant to outline the state’s response to the pandemic.

On Tuesday, when asked why he would sign a personal guarantee for millions of dollars while repeatedly saying he has turned over management of the family’s companies so he can focus on leading the state, Justice briefly said it has been his practice for years. He referred to earlier loans with Carter Banks of Virginia, which the governor’s companies are separately suing.

“The loans have always been personally guaranteed when they flowed from Carter Banks to Greensill, so that’s been there for a long, long, long period of time,” he said.

When the governor was first asked about the news spotlighting his personal guarantees this week, he initially demurred.

“I really don’t have anything additional to add. I have not read the story. It’s been reported to me about the story,” he said.

But Justice continued, “If you knew all the details you’d know that evidently Greensill is a bad, bad actor. And in almost partnership with that you’ve got the Credit Suisse people that were tied at the hip with Greensill that we didn’t know anything about. From the standpoint of what Greensill has done, how in the world could we have ever known anything whatsoever?”