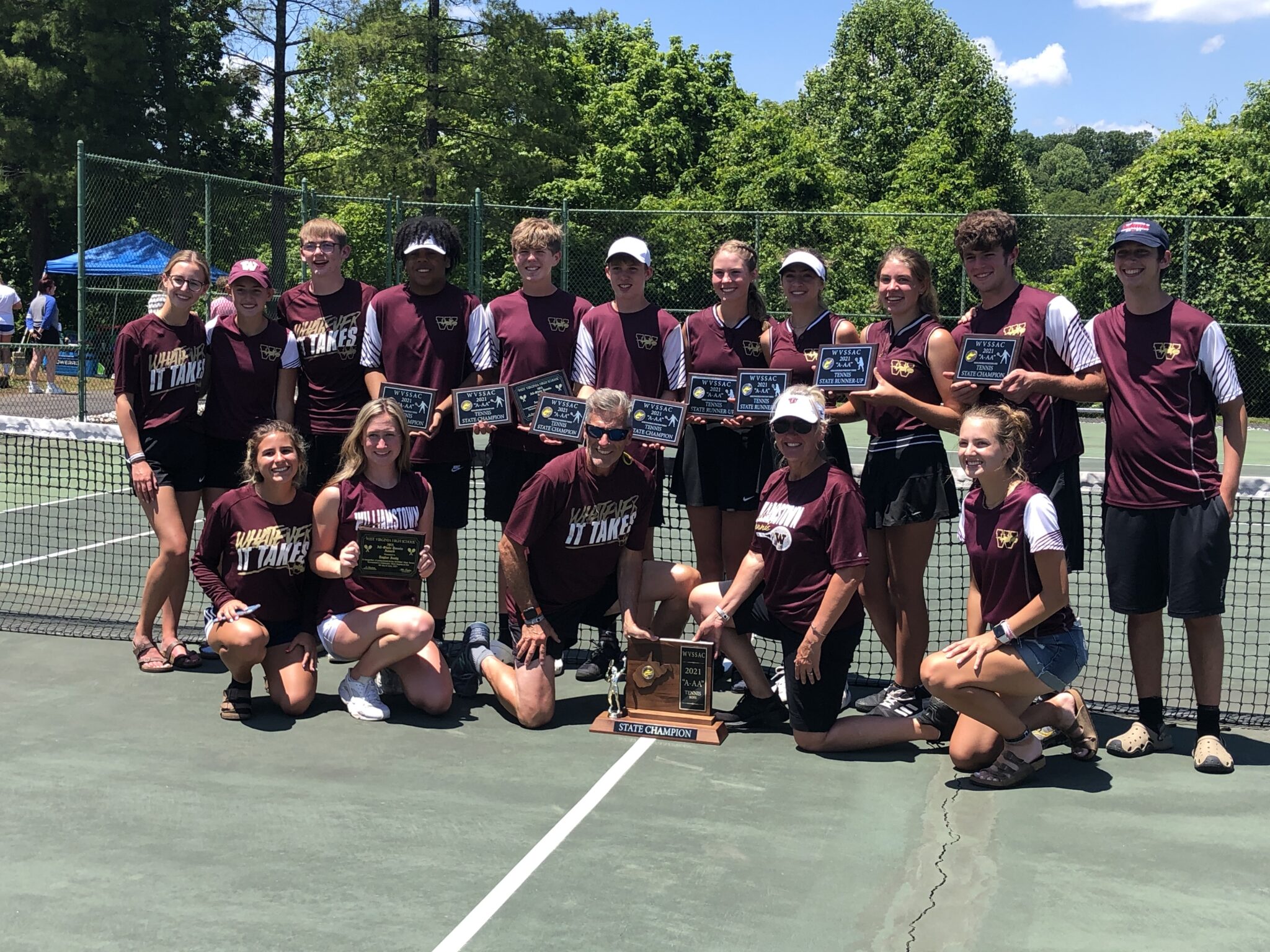 Members of the Williamstown tennis team pose after the Yellowjackets' boys squad claimed the Class AA/A championship in Charleston. Photo by Greg Carey/WVMetroNews.com

CHARLESTON, W.Va. — An abundance of singles and doubles titles isn’t a requirement for a tennis team to claim a state championship.

For Williamstown’s boys and Charleston Catholic’s girls, however, they sure made attaining the crowns a far easier task Saturday.

The Yellowjacket boys squad got a pair of singles titles and a pair of doubles titles to finish with 14 points and run away from the field for the Class AA/A championship — the program’s first title since 2014.

“A lot of hard work from the boys and they worked well together all season to get to this point,” Williamstown assistant coach Dave Leo said.

The Irish girls team saved their best for last, winning five of six title matches to total 13 points and claim their first crown since 2013.

“This is incredible,” Irish coach David Sadd said. “I knew we had a chance to do something special when I showed up for a practice in early May and these girls were already out here working to get better. It really paid off.”

CCHS won every singles title but No. 1, which went to Scott’s Jenna Butcher in her 6-2, 6-3 triumph against Logan’s Hannah Thompson.

The Irish got a No. 2 singles win from Evie Bastin, who topped Chapmanville’s Jill Blevins in the final 6-2, 6-1. Anne Cimino provided the No. 3 singles title, beating Chapmanville’s Emma Bryant 6-1, 6-0. Molly Murphy’s 6-4, 6-4 win over Williamstown’s Audrey Fenton gave the Irish a No. 4 singles title.

After CCHS’ No. 1 singles player Hannah Attassi was beaten by Oak Glen’s Lyndsay Reynolds in an opening round match, the Irish ran the table in singles play.

“A lot of people made a big deal when our top singles player fell and we could hear the noise,” Sadd said. “That’s understandable because they’re here to win, too, but our girls did a good job blocking out that noise and we knew there was a lot of tennis left.”

The Irish’s Emma Cimino and Celine Hannah teamed for a No. 2 doubles title, which they secured with a 6-3, 1-6, 6-2 win over North Marion’s Lea Barker and Raquel Taylor.

The final Charleston Catholic title came in No. 3 doubles action, with Anne Cimino and Murphy knocking off Williamstown’s Lauren Strobl and Claire Strobl 6-1, 6-0.

Logan’s duo of Hannah Thompson and Savannah Baisden teamed for a 6-2, 6-2 victory over Bastin and Attassi in the No. 1 doubles final, preventing the Irish from garnering a sixth title.

Catholic’s 14 points were enough for a comfortable win, with Logan (9), Chapmanville (9) and Williamstown (7) following behind.

“A lot of good play down the stretch was key,” Sadd said. “All our girls stepped up and contributed in a big way.”

For Williamstown’s boys team, it was a somewhat similar script to the Irish girls. The Yellowjackets claimed two singles and two doubles titles, allowing them to double up runner-up Parkersburg Catholic, which had seven points.

Tyler Fenton provided the No. 3 singles title with a 1-6, 7-5, 6-1 victory over the Crusaders’ Bradon Nguyen, who had gotten the better of Fenton multiple times earlier this season.

“Tyler showed so much perseverance and that’s really how our whole group was,” WHS coach Diana Leo said. “But for him to stick with it and come back for a win against a player who had already beaten him, that meant a lot.”

Brothers Gavin Bosgraf and Austin Bosgraf teamed for the No. 1 doubles title, which they wrapped up by topping Haden Fincham and Jackson Heath 7-5, 6-3.

Gavin Bosgraf was also a member of the Yellowjackets’ Class AA state championship basketball team, causing him to get a late start in tennis.

“We had to move back some of our matches so he could qualify in regionals, but he did a great job for us throughout the season,” Diana Leo said.

The other Yellowjackets’ title came in No. 3 doubles, with Fenton and Matthew Easter cruising to a 6-1, 6-0 victory over Keyser’s Bryson Bush and Stone Kesner.

Fincham also made it to the final in No. 1 singles play, where he was upended by Nitro’s Morgan Mann 7-5, 6-3.

Luke Tankersley of Saint Joseph Central was the No. 2 singles champ after picking up a 6-3, 6-3 win over Herbert Hoover’s Landon Persinger.

Keyser and Nitro tied for third in team standings with six points each.