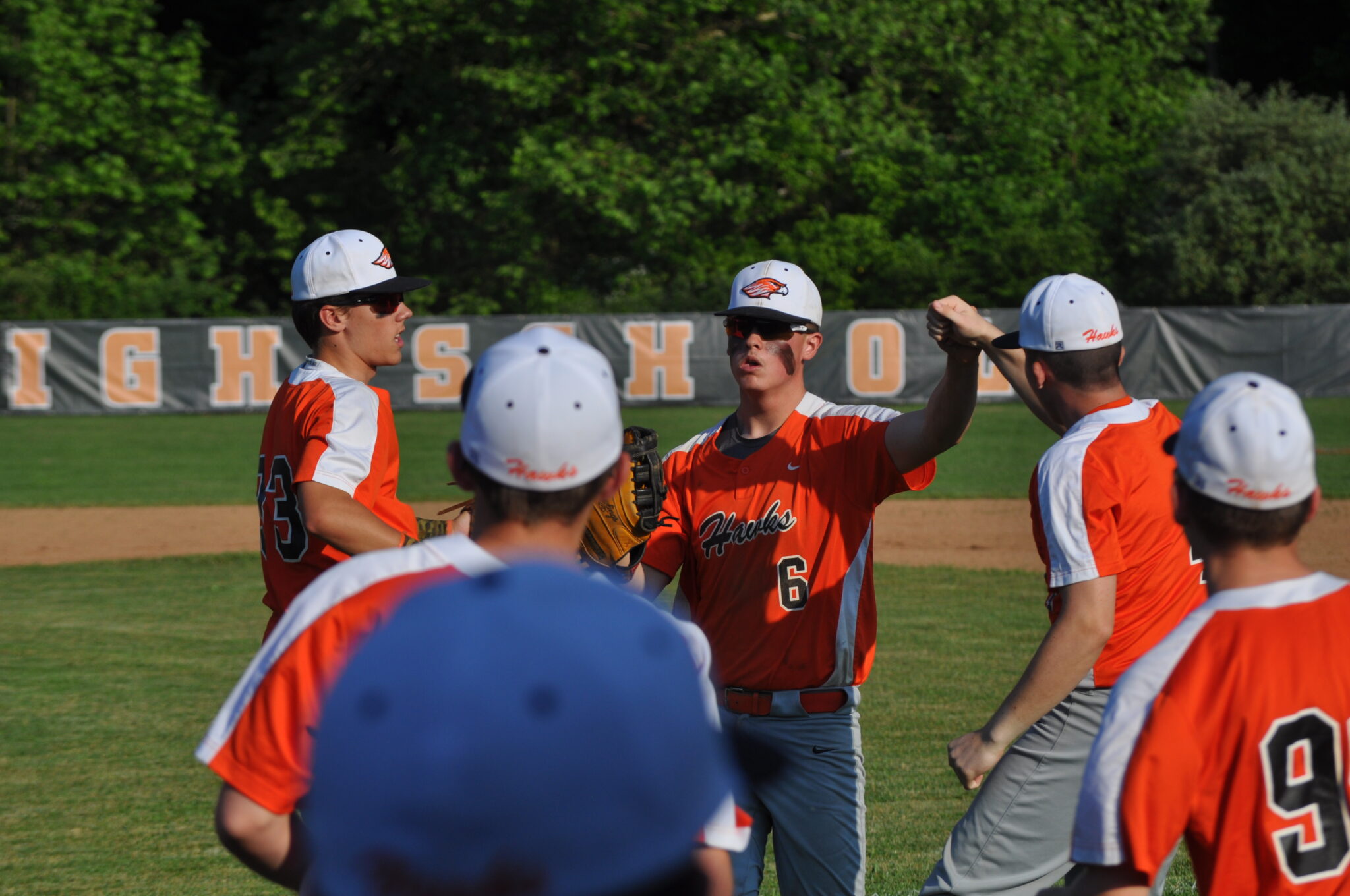 South Harrison's Josh Thomaschek (6) is congratulated by teammates during the Hawks' sectional win over Tygarts Valley. Photo by Greg Carey/WVMetroNews.com

LOST CREEK, W.Va. — When South Harrison welcomes Notre Dame on Monday, the Class A Region II, Section 1 title will be on the line for one of the state’s hottest teams.

The Hawks, winners of 13 straight, need one victory before two losses against the Irish to advance to a best-of-three regional series that would allow them to play for a spot in the state tournament.

If recent play and past results are any indication, South Harrison looks primed to play into next week.

The Hawks’ last loss came May 15 against Buckhannon-Upshur. Additionally, SHHS swept a doubleheader from NDHS on May 1, winning 12-8 and 12-4. The sweep left the Hawks with a 5-1 record, though they followed it by losing four straight.

Even though South Harrison never dropped below the .500 mark at any point in the season, the Hawks were just 10-8 before the ongoing win streak.

“I’d much rather be playing better at the tail end of the season than at the beginning of the season,” Hawks’ coach Frank Tate said. “I’ve had teams that started off strong and just petered out at the end. This team caught fire with about two weeks in the season left and they’re playing with great confidence.”

According to Tate, that confidence has been instrumental over 13 consecutive wins, which have the Hawks entering Monday’s matchup with a 23-8 record. The streak, which has featured South Harrison outscoring the opposition 128-21, has allowed Tate’s team to surpass the school’s single-season record for wins, which was previously 20.

“This game is so difficult how it is. When you go into that box or on that mound, you have to be confident,” Tate said. “If you’re not confident, it’ll weigh you down. The kids are playing confident and it’s showing on the scoreboard.”

Dating back to a Little Kanawha Conference semifinal matchup with Tyler Consolidated, South Harrison has allowed only three runs over its last four games, while holding Doddridge County and Tygarts Valley scoreless in sectional matchups.

The Hawks have scored at least six runs in all 23 victories, with 18 featuring a double-digit scoring output.

A strong mixture of veterans and underclassmen has also proven beneficial for SH. Sophomore Caden Hall and freshman Wyatt Shears combined for a five-inning shutout in the most recent contest with Tygarts Valley. Hall, who logged four scoreless innings in that game, also hit third against TVHS.

Dylan Richards, a junior, was in front of Hall in the batting order, while leadoff hitter Logan Ross, cleanup batter Tommy Davis and No. 5 hitter Zach Feathers are each seniors.

By winning their first two games in sectional play, the Hawks have not only put themselves in the driver’s seat — they’ve also made Tate’s job easier when it comes to choosing who to throw.

“I think we are deep pitching wise. I can throw eight guys out there, but I don’t want to try that,” he said. “I want us to keep it in the top four.”

A victory Monday would prevent South Harrison from likely having to use at least two more pitchers Tuesday in what would be a winner-take-all game against the only other Class A program in Harrison County. It would also give the Hawks 14 straight victories ahead of regional play, where two-time defending Class A champion Moorefield could be waiting.

“This group of kids is gritty and right now we’re in the driver’s seat,” Tate said. “They’re going to have to come to Lost Creek and beat us twice and that’s a tall task.”