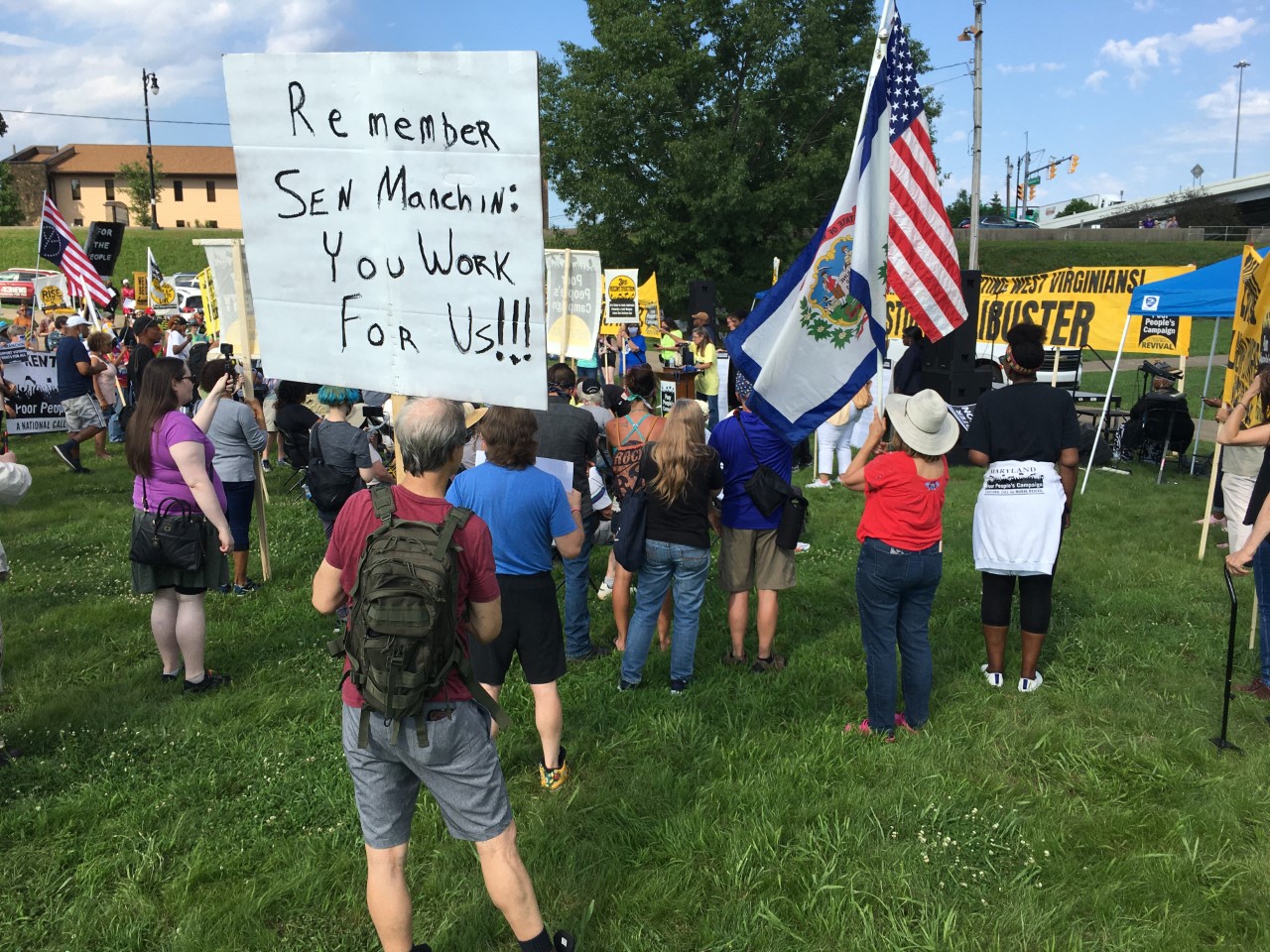 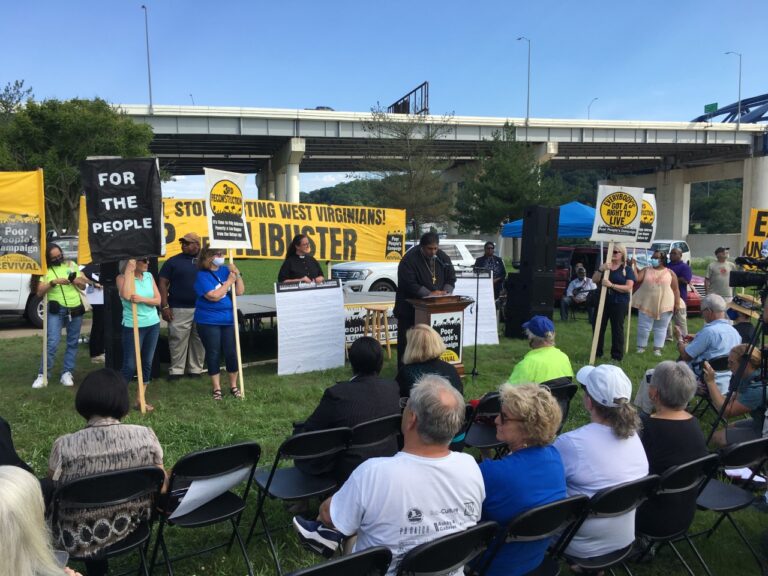 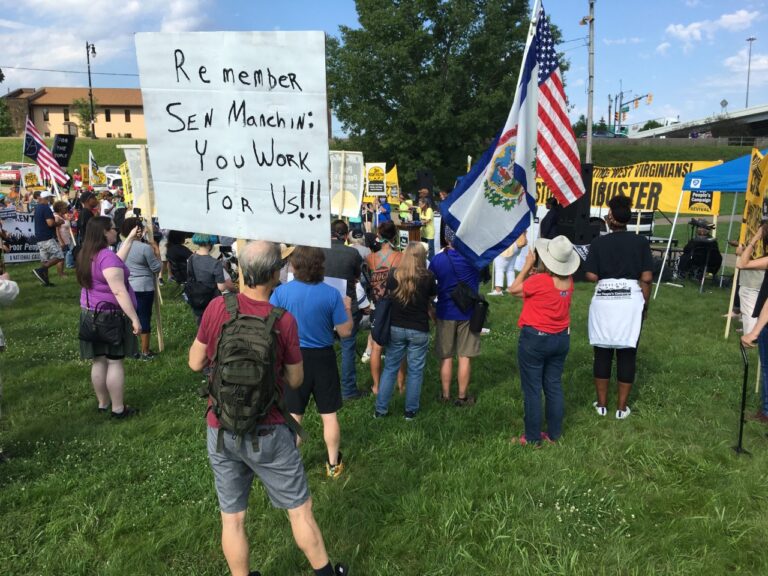 A demonstrator holding a sign during Monday's rally. (Alex Thomas/WVMetroNews.com) 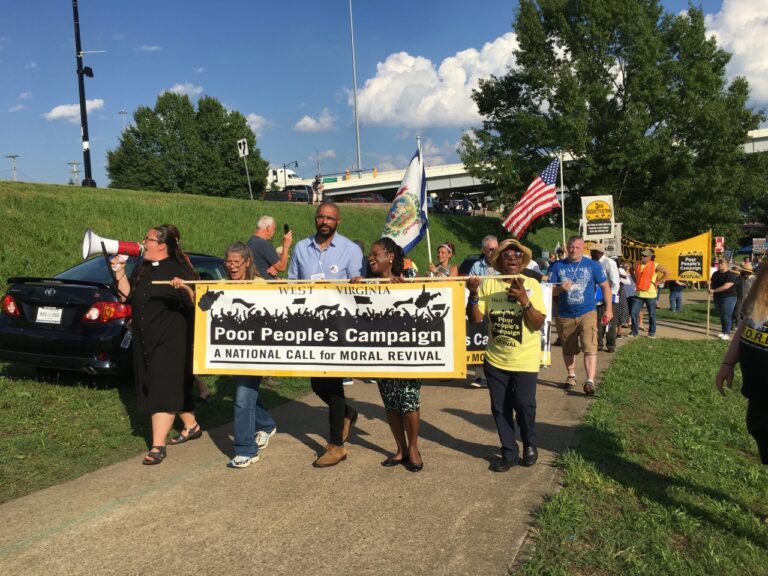 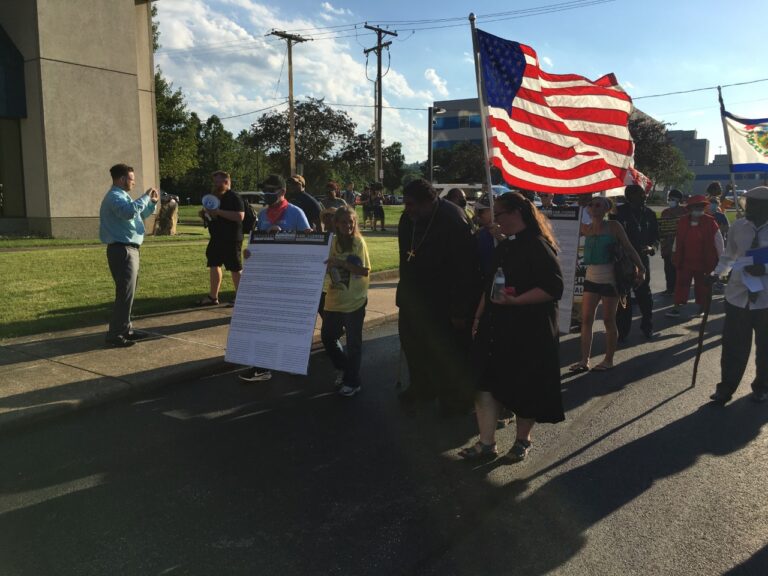 CHARLESTON, W.Va. — While U.S. Sen. Joe Manchin, D-W.Va., was in Washington, D.C. on Monday, around 200 people marched to his Charleston office opposing his stances on the Senate filibuster and sweeping election legislation.

The Poor People’s Campaign organized the “Moral March on Manchin,” which also included a rally at Charleston’s Magic Island Park. The Rev. William Barber, a North Carolina minister who has headed other demonstrations for progressive political causes, led the march in West Virginia’s capital city. Partner organizations from Kentucky and Ohio also participated in the Charleston event.

A similar event took place outside of Manchin’s Martinsburg office.

“We ain’t in this heat to play,” said Barber, the national organization’s co-chair. “We’re not in these streets to play. We are here to bring street heat and moral heat to the legislative processes. The voices of the people of West Virginia will be heard.”

Manchin has been a proponent of maintaining the filibuster, a tool in the Senate requiring 60 legislators to support advancing a bill in most cases. Democrats control the split Senate with Vice President Kamala Harris serving as a tie-breaking vote, but the filibuster prevents the chamber from passing legislation addressing their top priorities.

Lawmakers voted 54-35 last month to create a commission to investigate the Jan. 6 insurrection at the U.S. Capitol, in which Republicans successfully blocked the bill from passing.

Pamela Garrison, a member of the West Virginia Poor People’s Campaign chapter, criticized arguments about the filibuster being a necessary roadblock for advancing bipartisan policies.

“That’s fine when they are people that are wanting to accomplish something, not just one side block it all,” she said.

The demonstrators also criticized Manchin’s opposition to the For the People Act; the senator wrote in a June 6 opinion piece for the Charleston Gazette-Mail he will vote against the legislation, which would require states to encourage voter registration and increase voting options, as well as prohibit voter roll purges and gerrymandering legislative districts. The legislation also includes campaign finance changes.

Democratic lawmakers have pushed the proposal as Republican-controlled state legislatures have passed voting legislation some groups argue suppresses people of color. The House of Representatives passed its version of the For the People Act in March; Reps. David McKinley, Alex Mooney and Carol Miller joined Republican colleagues in opposing the bill.

Manchin, West Virginia’s secretary of state from 2001 to 2005, is the only Democratic senator not sponsoring the For the People Act.

“I believe that partisan voting legislation will destroy the already weakening binds of our democracy, and for that reason, I will vote against the For the People Act,” he said.

Manchin has argued in favor of legislation ensuring the federal government has oversight over local and state election laws; the senator and Alaska Republican Lisa Murkowski sent a letter in May to congressional leaders asking Congress to approve a new formula to give the federal government necessary supervision over voting changes.

The Rev. Matthew Watts, the senior pastor of Grace Bible Church in Charleston, called on Manchin to use his position in the split Senate to pass progressive measures.

“God has elevated you to put you in this place for such a time as this to save this nation and to save this democracy,” he said.

The demonstrators also noted Manchin’s opposition to a $15 minimum wage and ongoing discussions to pass an infrastructure package, in which Manchin is part of a bipartisan group drafting a proposal.

The protesters marched one mile from Magic Island Park to the senator’s office at the state Lottery Building, where they left letters urging Manchin to act.

The Senate is in session through June 25, and Manchin was in Washington, D.C. on Monday. A Manchin spokesperson noted his staff spoke to demonstrators about their concerns when they arrived at the senator’s office.

Fifty-four West Virginia county clerks wrote to Manchin and Sen. Shelley Moore Capito, R-W.Va., in May to encourage the senators to oppose the legislation. Capito has described the measure as federal overreach into elections.