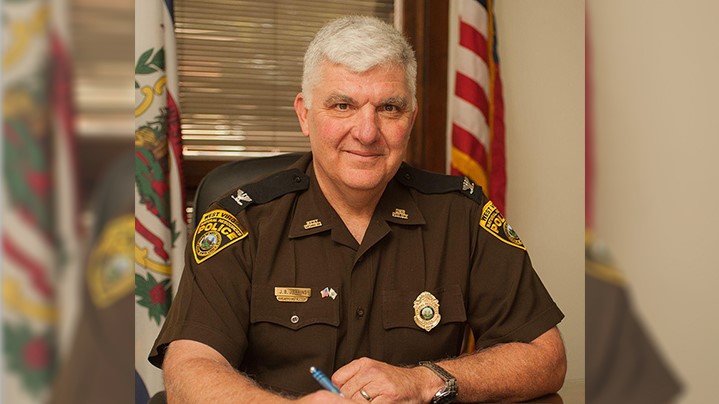 Colonel Jerry Jenkins started as a lifeguard at the Lost River State Park Pool and retires as Colonel of the law enforcement section. PHOTO: John McCoy/Gazette-Mail

SOUTH CHARLESTON, W.Va. — One of the longtime lawmen of the West Virginia Division of Natural Resources is hanging it up this week after more than 40 yeas of service. Colonel Jerry Jenkins will retire having held every rank of the DNR law enforcement section.

Jenkins grew up in the community of Mathias in Hardy County. His family’s farm bordered Lost River State Park. The park is where he developed his love for the state’s natural resources.

“Every Sunday after church that’s where you went. I grew up in the park system,” he explained in a recent conversation on West Virginia Outdoors.

Jenkins became a lifeguard at the park pool during summers of his college years and after he finished up at Potomac State and later West Virginia University he went to work for the park full time.

“When I first came to work, I was as a Conservation Aid at Lost River. Some Conservation Officers recruited me to take the test and go into law enforcement,” he explained.

The department and its policies were vastly different in 1975. At the time, officers learned on the job after taking a test. Jenkins reported to Charleston to be sworn in and pick up his uniform. The Colonel at the time had openings in Lincoln County and Pleasants County.

“He asked me if I liked water and I told him I loved water–so he sent me to Pleasants County,” said Jenkins.

He reported to Parkersburg and met his superiors. He soon learned there was a lot of self motivation on the job.

“The Sargent said follow me to Middlebourne. I followed him. He gave me a county road map and said, ‘See you later.'” Jenkins laughed. “That was the training at that time. Luckily some senior officers took me under their wing and I had some troopers to teach me how to shoot.”

Jenkins would later go to the police academy when the training was upgraded. He’d already been an officer four years when he got there.

“I had plenty of stories for the young guys by then.”

One of the stories was from a dark night on the Ohio River when he put his patrol boat in the water to answer a late night call of a pleasurer boat hitting a barge. Such a collision was a regular occurrence on the river. What was irregular on this night was when Jenkins put his boat in the water he noticed his feet were getting wet.

“Somebody had forgotten to put the plug in the boat. That somebody was me. That’s when I learned if you go full speed on plane, it will pull the water right out of your boat,” Jenkins said.

He also used the story for many years as a reminder to other officers.

Eventually Jenkins transferred closer to home and wound up in Mineral County in 1989. He made Sargent and had responsibility over Morgan, Berkeley, and Jefferson Counties.

During those days West Virginia’s hunting season was largely focused on the counties Jenkins had responsibility to patrol. Everybody went to the eastern panhandle to hunt.

“During deer season all the coal miners were off and they’d all head to the panhandle. It would run us day and night with complaints. It’s not like that anymore, deer are spread out all over the state now. That’s changed dramatically,” he said.

Eventually promotions up the ladder came his way. He made Lieutenant and was assigned to Romney and eventually the Captain in Romney. During the 1990’s he applied for the position of Major which meant a move to Charleston. When he arrived, Colonel Jim Fields informed him he would be the law enforcement section’s legislative liaison.

“I’d never been to the Capitol,” Jenkins laughed.

It took some time to navigate Cass Gilbert’s creation and to learn the ropes of working with lawmakers. He also admitted it was a major shift from working in the field.

“That was a great change. You talk about a farm boy from Hardy County coming to Charleston. That was a little bit of culture shock,” he said.

Jenkins developed good relationships as he progressed up the ladder and it served him well. Those relationships helped him when he finally ascended to the top spot as the Colonel to make changes he believed improved the agency for sportsmen and improved the job for officers.

“Training is definitely better. Today officers have to go to the academy and then they have to go through a field training program which can last up to a year before they work by themselves. But the greatest improvement is the equipment. When I first started we didn’t have a radio. You couldn’t talk to anybody, so the communication today is just fantastic,” he said.