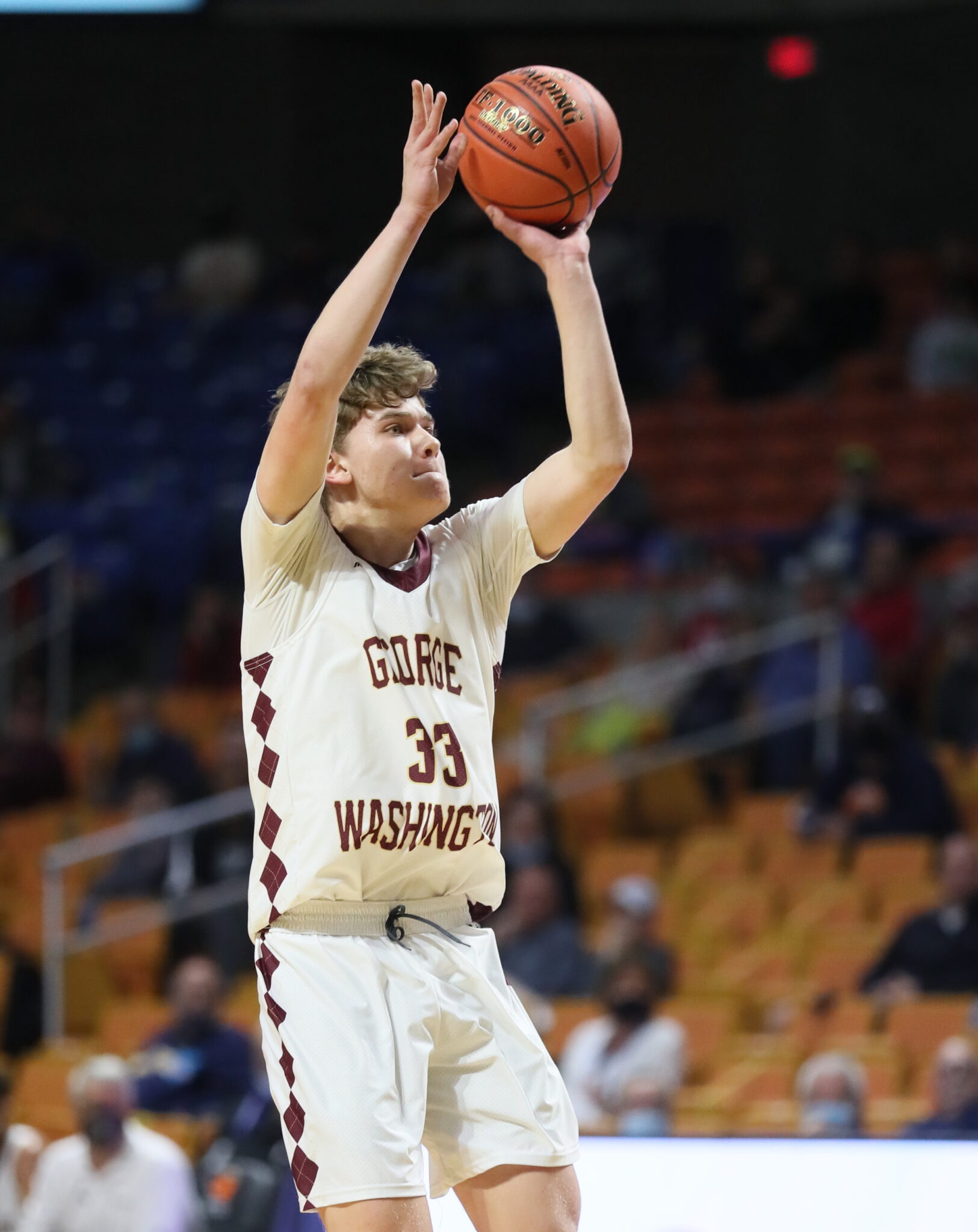 George Washington's Ben Nicol is receiving interest from several Division I schools after a strong sophomore season in which he helped the Patriots claim the inaugural Class AAAA championship. Photo by Eddie Ferrari

Less than two months after nailing the game-winning shot against Morgantown in the Class AAAA championship game, George Washington’s Ben Nicol is gaining traction in the recruiting world.

The 6-foot-7 Nicol has received Division I offers from Radford, Youngstown State, and Ohio in the last two weeks.

Nicol, a 2021 Class AAAA all-tournament team member, is not only enjoying the love from college coaches, but getting the chance to see where his game molds with other teams.

“Style of play, for me to succeed in that program,” Nicol said on what plays into his interest with a school. “Also academics, because I know the basketball will not bounce for me forever. I certainly want a good degree and to earn a job after that.”

Nicol will look to add his name to that list.

“He has been tremendous,” Nicol said of Greene. “Everyone knows him somehow, someway. He has been around the game a long time.

“It is a small world, especially in the basketball world. Coach has helped me.”

Nicol and other players from across West Virginia will compete as members the WV Generals AAU team this summer. Austin Ball, who recently transferred from Man after helping the Hillbillies win the Class A championship, and Scott’s Reece Carden are teammates of Nicol.

“It is a fun experience,” Nicol said. “Most people outside West Virginia do not see the talent that West Virginia has. Every time they see West Virginia, they think they are going to run over us. When we get to play, we see what happens from there.”

Nicol averaged 10 points and five rebounds per game as a sophomore last season. He remains open-minded about his overall growth on the court.

“I want to get stronger, quicker, and more explosive,” Nicol said. “We lost two great guards in Mason [Pinkett] and Alex [Yoakum], I think tightening up my handles is important, hitting open and simple shots and becoming more of a shotmaker than I was last year. Less of a third option and more of a reliable guy.”

Nicol is not the only Patriot who is likely to see an expanded role next season. The loss of Pinkett and Yoakum, half of GW’s four-member senior class, leaves major production to be filled for fellow returners Taran Fitzpatrick, Zane McCarty, and Jayson Monday.

“I say more than last year, but I still trust my guys,” Nicol noted on his role as a leader. “I know that Taran, Jayson, and Zane will do their job as seniors. They have been there longer than I have. I know I will trust them. We will do what we can to get back to the Civic Center.”