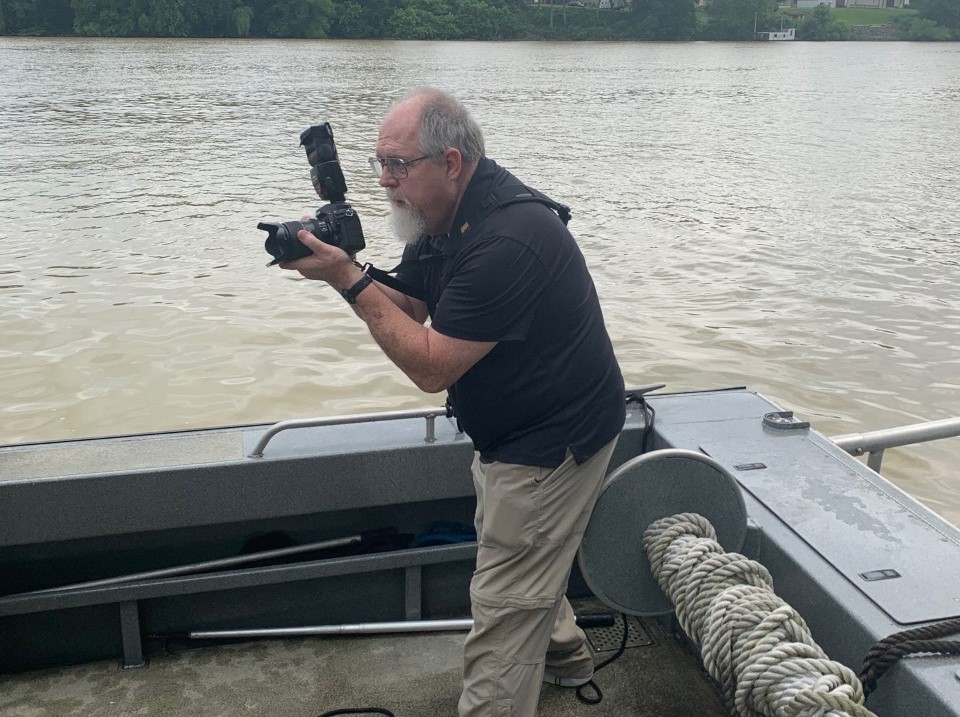 John McCoy, Outdoors Editor at the Charleston Gazette-Mail works on his final feature story for the paper on a DNR patrol boat on the Kanawha River.

CHARLESTON, W.Va. — The man who has chronicled every development in West Virginia’s outdoors for more than four decades is ready to put down the pen, pad, and camera and pick up his fishing rod. John McCoy, the longtime outdoors editor for Charleston’s newspapers, posted his last column and story over the weekend.

McCoy’s journey started as a journalism graduate from Marshall University working as a general assignment news reporter with WOWK TV. He returned to school and earned a degree in mining engineering. It was around the same time he started the freelance work with the Daily Mail. When editors became more familiar with McCoy’s journalism ability, they offered him a full-time position.

“When I started full time, it was two things: it was environmental reporter and outdoors editor. But after a few years it became clear I could do one or the other, but not both because it took up so much time,” McCoy said.

The paper decided the outdoors would be his beat. McCoy did a little market research to sell his bosses on the idea. When they saw the level of interest in hunting and fishing in West Virginia, newspaper decision makers believed it was wise to keep him as a full time staffer to focus on hunting and fish matters. His work involved weekly feature stories but also a weekly opinion column.

“My goal was never to make an impact, my goal was to just educate the public as to what was going on. I put the facts out there as best I saw them, good, bad, or ugly and let the people make up their minds how they wanted to,” he explained.

The job afforded incredibly enjoyable opportunities.  McCoy was able to document the rebound and in some cases reintroduction of several wildlife species we enjoy in West Virginia today. When he started the outdoors situation was vastly different.

“In 1977 we only had 500 bears in the entire state. In fact the Daily Mail had what they called an ‘S.O.B’ campaign or a ‘Save Our Bears’ campaign, That was back when a biologist by the name of Joe Riffenberger made the suggestion we move hunting season back a month to allow the pregnant sows to go to den. It made all of the difference in the world, now we have 14,000 bears roaming around the state,” McCoy explained.

He saw West Virginia’s deer numbers increase and reported on every stage of the wild turkey trap and transfer project in the 80’s and early 90’s.

“I was there when the last trapped and transferred turkeys were released on Holden Mountain in Logan County,” he said.

He wasn’t far from that same spot a few year ago when Governor Earl Ray Tomblin dedicated the first elk in the elk reintroduction program to West Virginia. He first reported on the discovery of Chronic Wasting Disease in the Eastern Panhandle and was there when the agency turned loose the first otters in the Little Kanawha River in the 1990s.

Throughout his career, superiors rarely questioned him and always had his back when the topics were touchy. He admitted he had concerns, particularly with the Charleston Gazette, when it came time to report or craft a column in regard to the Second Amendment or some aspects of hunting in general. However, McCoy said nothing ever became an issue.

“I was a little afraid that might happen, but it never did. They gave me complete free reign. The Gazette has always been known as a ‘writer’s newspaper’ and they upheld that for me,” he said.

Through the years McCoy had his disputes with the powers that be at the Division of Natural Resources. He laughed that more than a couple of DNR directors through the years have blackballed him from speaking with agency personnel over an objection to something he reported or criticized in his opinion column. But disagreements usually didn’t last too long, and people got over hurt feelings.

Unfortunately the stories weren’t always from around a campfire or along a streambank. McCoy quickly pointed to those stories as the ones he most disliked.

“I never liked politics, but unfortunately politics rears its ugly head in almost every aspect of our life including hunting and fishing. That was at times unpleasant, but we got over it and we moved on,” he said.

Although he’s leaving, chances are you’ll still hear from John from time to time. He’ll pick up the occasional freelance story in some national magazine publications and even the Gazette Mail is still interested. He’s agreed if he sees a story along the backwoods trail he thinks would work, he’ll pick it up and send it on for a fee. Old habits die hard for veteran reporters.

“My byline will still pop up from time to time, just not as often. I’m going to fish. I’m going to tie flies and I’m going to ride my bike and get myself back in shape to enjoy the years I have left,”

Outdoors
Elk cows prove shy about showing off their young
DNR Elk Project Leader Randy Kelley says he has learned elk are masters of hiding their offspring for an extended period of time.
By Chris Lawrence
Outdoors
Justice appoints Natural Resource Commmissioners
The body which makes key decisions on hunting and fishing management in the state was revamped by the Legislature and includes two new members.
By Chris Lawrence
Outdoors
DNR plans full patrols of W.Va. water during the holiday weekend
Natural Resources Police encourage careful planning to insure safe and sober boating this holiday weekend.
By Chris Lawrence
Outdoors
Longtime NRPO returns to lead the agency
Bobby Cales, who rose to the rank of Capitan before leaving for a job with the W.Va. Military Authority, returns to become the Colonel of the DNR's law enforcement section.
By Chris Lawrence
View AllHoppy's Commentary