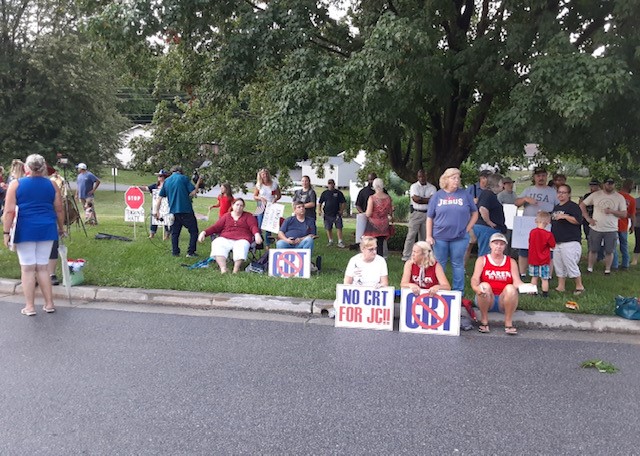 CHARLES TOWN, W.Va. — A rally this week outside of the Jefferson County Board of Education aimed to draw attention to concerns about Critical Race Theory and Black Math Genius programs.

There were about 100 people on hand, according to the Journal. Speakers called the programs ‘divisive.’

The school board meeting Monday was switched from in-person to Zoom Monday morning.

Last month, the $63,000 Black Math Genius program was put on hold while the district considers bringing it on board. During meetings last month, they heard from parents about the challenges some black students face.

Heather Murray was among those speakers supporting Black Math Genius program at June meeting of the Jefferson County Board of Education. She said black students in Jefferson County are underperforming in math.

“Public school educator and mother of five, three of whom are current students with Jefferson County Schools. I’m here this evening on behalf of my children and any child who looks like me. The data for Jefferson County Schools shows that our African American subgroup are underperforming in the area of mathematics. I believe this is a urgent area of need. Our children now have to be put on hold,” Murray said.

The Black Math Genius program is specifically designed to assist black students who need extra help in mathematics. An announcement from the district June 2 said it was to be implemented in the county by June 10th. The school system, though, has paused the program.

Jefferson County Assistant Superintendent Shawn Dilly spoke at that June BOE meeting about why the district pressed the pause button on the program.

“We haven’t abandoned or canceled the program. We are just looking at ways that we can move forward that supports us in a way that we don’t run into the some of the same challenges that we’ve run into currently because we do recognize the numbers the parents care about,” Dilly said. “Those numbers equate to children, and we have an important piece that we want to make sure we find the right ways forward to make sure we are playing the long game on behalf of our kids here in the county.”

The Putnam County Commission voted unanimously Tuesday to deny funding to any group that promotes the instruction of Critical Race Theory.

Critical Race Theory is not taught in West Virginia, according to state Department of Education Communications Director Christy Day.

“Critical Race Theory (CRT) is not included in the West Virginia Teaching Standards. Curriculum is delivered based on state standards, so if it is being taught, that decision would be made at the county level as county boards of education determine the curriculum that is used within their schools,” Day said. “The West Virginia Department of Education is not aware of CRT being included in the instructional resources currently chosen by any county in West Virginia.