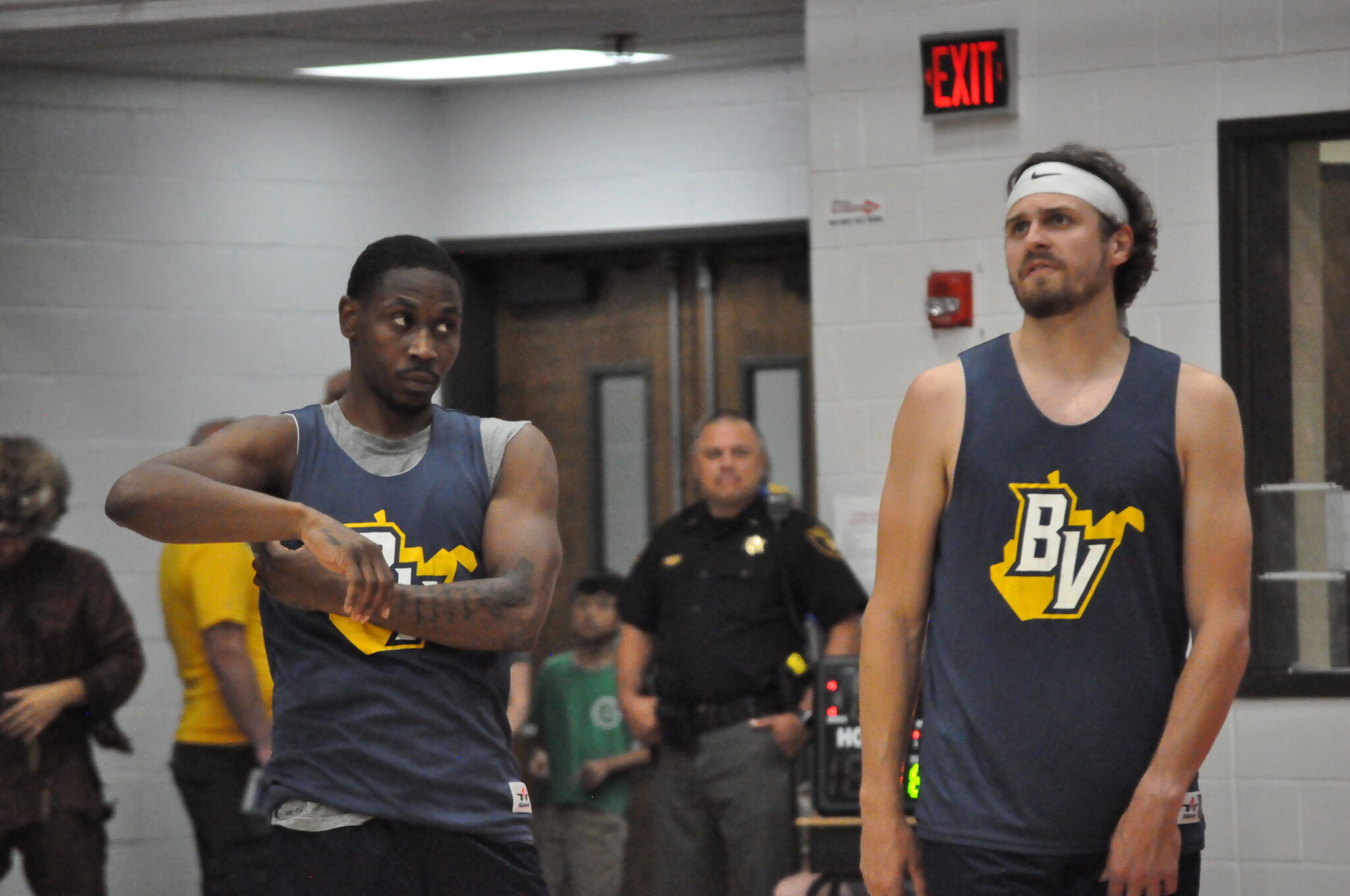 Guards Juwan Staten (left) and Chase Harler will be in action Saturday for Best Virginia against WoCo Showtime in a first-round TBT matchup. Photo by Greg Carey/WVMetroNews.com

CHARLESTON, W.Va. — The opening round of The Basketball Tournament (TBT) presents a unique set of challenges.

With little to no film of an opponent and a large element of unfamiliarity, teams are likely to focus on themselves as they try to advance in the quest to ultimately win the $1 million prize rewarded to the tournament champion.

“It’s different from college or professional where you have film on these guys,” said Best Virginia guard Chase Harler. “Almost everyone plays on different teams now and they’re coming back and playing on one team. It’s about showing up, being professionals, doing your job and playing hard.”

That’s what the West Virginia alumni-based team Best Virginia, a No. 2 seed, will look to do in its 2 p.m. opener Saturday against No. 15 WoCo Showtime, a squad largely comprised of Wofford alums.

The first-round contest at the Charleston Coliseum follows a noon tip between Marshall’s alumni-based Herd That, a No. 3 seed, and No. 14 Team DRC. Both contests will air on ESPN.

One year after missing out on TBT due to issues with covid, Best Virginia will participate in the event for a second time.

“I know a lot about them. They’re good and that’s what we’re trying to tell them,” Long said. “They’re a good team that are going to play well off of each other.”

Best Virginia played two exhibitions last week, first running away from Southern Elite for a lopsided win in Beckley, before overcoming an early 11-0 deficit to beat Underground Kings in a more competitive contest in Wheeling.

“You’re not going to be able to solve everything in five days, but we’ll get it done. We have to be clear as coaches and clear as players to all get on the same page and know what we’re trying to accomplish.”

“That’s why we play these games,” Staten said. “We hope to get some type of look that we’re going to get in the TBT and they definitely did that. They put us in a situation where we felt the pressure. We’re in front of our crowd and we’re supposed to win the game. We felt the pressure so that made us dig down and kind of feel some of the emotions that we might feel in the TBT. That was great for us and I liked the way we responded.”

Best Virginia had a late roster addition Thursday when it announced former Fairmont State standout Jamel Morris had joined the team. Morris replaces former WVU guard Jaysean Paige, who had been listed on the roster earlier in the summer, but will not play in the TBT.

Should Herd That and Best Virginia advance beyond the first round, both teams will know the second-round opponent by Saturday night.

Herd That would face the winner of No. 6 Team 23 and No. 11 Georgia Kingz at 7 p.m. Monday. Best Virginia’s second-round matchup would come against seventh-seeded D2 or No. 10 Bleed Virginia at 9 p.m. Monday.

Herd That and Best Virginia each need two wins to square off Wednesday in the Sweet 16 for the right to win the region.