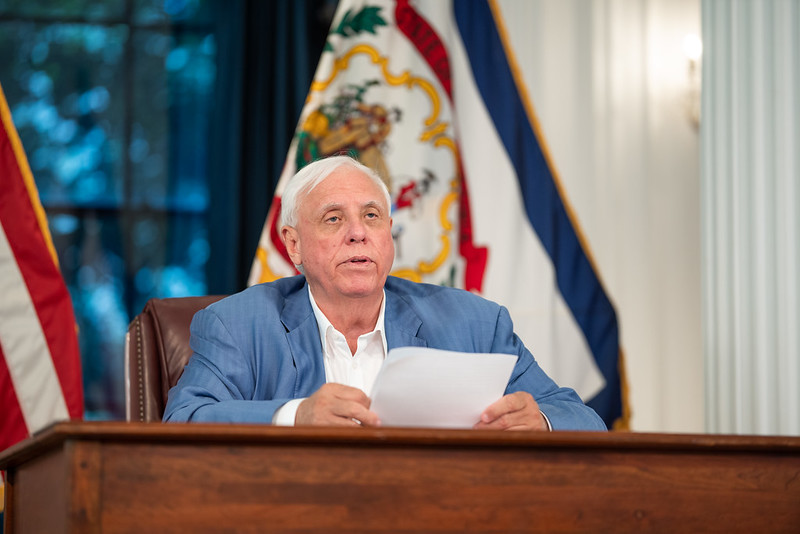 “I’d just sit back and wait and wait for the final stuff to come out. If truth prevails, it’ll be a terrific outcome,” the governor said today. “If bad stuff prevails it could be very, very difficult on our family.”

Justice’s family-owned businesses have been in conflict on multiple fronts for weeks. The Justice businesses have two active federal lawsuits over hundreds of millions of dollars against two lenders, Carter Bank & Trust of Virginia and the bankrupt international financial services company Greensill Capital.

Carter Bank this month filed claims amounting to more than $58 million against the governor and first lady Cathy Justice over personal guarantees they signed on loans that went into default.

And the Internal Revenue Service has filed a lien of more than $8 million against Jill Justice, the governor’s daughter and president of The Greenbrier resort, over unpaid taxes dating back to 2009.

Reporters asked two questions about the financial turmoil during a briefing today, focusing on the $58 million claim against the governor and first lady.

Justice responded by pushing back against conclusions that might be drawn over any single financial conflict. And he pointed to his company’s federal lawsuit against Carter Bank as the other side of that story.

“It’s easy to hit at the governor or whatever and say look at somebody said or look what the Carter Bank has filed. All I would say is sit back and watch and wait until absolutely the final outcome,” Justice said.

Justice and his companies sued the bank in federal court May 31 over millions of dollars in loans that were coming due the next day. That lawsuit claimed the bank grew restrictive, the financial relationship grew toxic and the bank wouldn’t cooperate on refinancing loans coming due for Greenbrier properties.

In a separate court action, Carter Bank filed two claims seeking a direct path to compensation based on guarantees signed by the governor and first lady.  The claims were filed July 6 in Circuit Court of the City of Martinsville, Va., which is where Carter Bank is based.

Jim and Cathy Justice signed the guarantees during a broad, 2020 restructuring of the debt of family-owned companies. That document, which was filed in federal court last week, shows such guarantees were signed on loans representing millions of dollars in loans covering several Justice properties, with most coming due in October, 2022.

The guarantees originally signed by the Justices note in bold and all capital letters that the guarantee of judgment provisions were included. The provision allowed any of several specified lawyers to file a claim in case of default.

“Absolutely at the end of the day if people will just be still and just wait for the final outcomes you’ll see a situation that will be the outcome of what your governor has already told you,” Justice said today.

“Just sit back and wait till the final outcomes. It could be that someone wants to take a piece of what’s going on and ignore the whole.”

The governor heads a family business empire with dozens of operations listed in his most recent financial disclosure form with the state Ethics Commission. The businesses are focused on coal, agriculture and tourism properties.

The two that are at the center of the claim by Carter Bank are among the resort properties associated with The Greenbrier, the historic White Sulphur Springs destination that Justice bought out of bankruptcy a decade ago.

The Greenbrier Sporting Club offers memberships for real estate owners to enjoy private amenities unavailable to hotel guests while also having access to the resort.

Oakhurst Club is a Justice development company that envisioned a golf course designed by legends of the sport, hundreds of luxury homes and a ski resort.

Justice’s businesses filed a lawsuit in federal court against Carter Banks the day before the loans for the Greenbrier properties were coming due. That lawsuit alleged a deteriorating relationship with the bank culminated with a standoff over refinancing Greenbrier properties earlier this year.

The lawsuit described tension with Carter Banks coming to a head over eight recent weeks because of the Justice family’s desire to partner with another lender to refinance loans that Carter held. The Justice companies alleged being stonewalled.

“We wouldn’t have brought suit against that bank if their behavior had been exactly that or close to that of the founder of the bank,” Justice said.

Justice successfully ran for governor in 2016 by characterizing himself as a successful businessman who could translate that experience.  Forbes had named him as the state’s only billionaire, a title that was retracted this year over the financial troubles with Greensill.

A month into his first term, Justice  issued a letter to state employees saying he was pursuing a blind trust for his many businesses, but described his holdings his as too complicated to move quickly.

“Being Governor is a full-time responsibility,” Justice wrote. “I want to put all of my assets in a blind trust, however, the process has been slowed down by the multitude of financial institutions that work with my family’s companies.”

Today he circled back to those statements, again referring to his reputation for business acumen but saying his first priority is leading state government.

“I’ll be short and sweet and anything but evasive: You elected a governor who had lots and lots of businesses and was doing lots of stuff,” he said.

The governor concluded, “We just love to report the bad. At the end of the day what we need to do is just stand down and know my effort is wholeheartedly behind running this state as your governor.