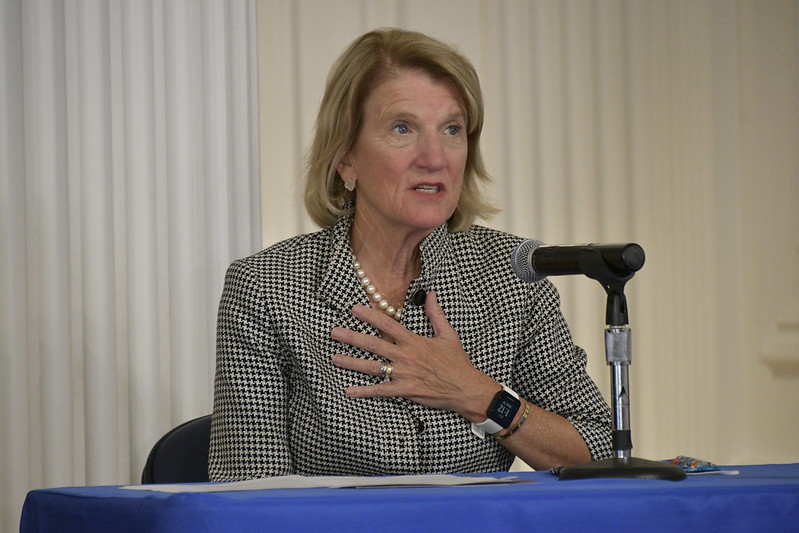 Capito’s comments to reporters on Thursday came a day after the Senate rejected a motion to begin debate on the proposal, in which Capito and Senate Republicans voted in opposition. Senate Majority Leader Chuck Schumer, D-N.Y., switched his vote to “no” and can call up the matter again for consideration.

Capito led early negotiations between Senate Republicans and the White House, but talks ended without an agreement.

“I’ve been committed to a bipartisan process,” she said. “I started the process with the president in late April. I think the momentum I gained was significant in terms of getting this second group off to the races here, so I’m hoping for a good result.”

The bipartisan group last month unveiled a legislative framework, which includes $579 billion in new spending toward road and bridge projects, water infrastructure, resiliency and broadband. Sen. Joe Manchin, D-W.Va., is one of 22 senators involved with the bipartisan group.

“I think that’s difficult at the least and very, very important to me in terms of how we afford this as we move forward,” Capito said about funding sources.

Sen. Tom Carper, D-Del., the committee’s chairman, said Wednesday he will not vote for infrastructure legislation that does not include the two proposals.

“The White House and my Senate colleagues relied on these bills as the foundation for the bipartisan framework underway,” he said. “I will not vote for infrastructure legislation if it fails to advance and fully fund these two vital priorities for investing in our nation’s future.”

Capito noted she is concerned with how spending will be divided — referencing how much money could go toward transit — but it is difficult to assess the proposal without legislative text or an analysis from the Congressional Budget Office.

“We know what the ideas are, but we don’t have affirmative numbers,” she said.

The bipartisan group is stuck on determining an appropriate amount of money for transit. The bipartisan framework dedicates $48.5 billion in new spending on top of regular spending and coronavirus relief funds allocated throughout the coronavirus pandemic.