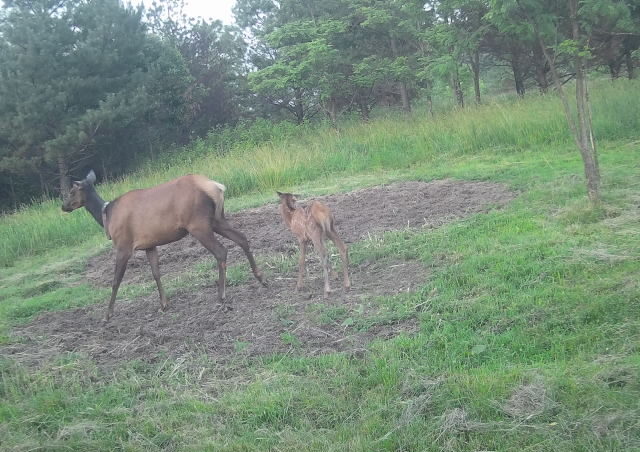 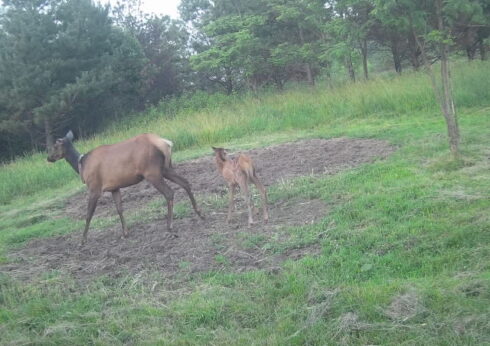 An elk calf caught on a cell phone trail camera on the Tomblin WMA in recent weeks. 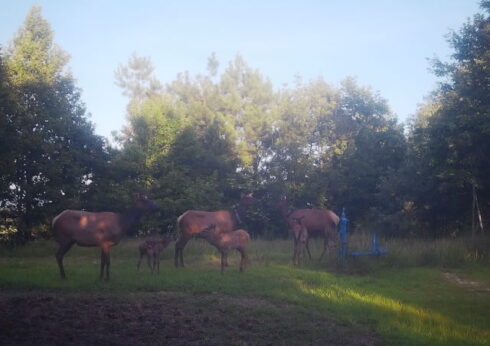 Kelley said knowing for certain just how many newborns there are in the elk herd is hard to know because the numbers are expanding and the cows are elusive.

HOLDEN, W.Va. — Although there are literally thousands of acres of the steep and rugged West Virginia hills to roam, the state’s elk herd seems content to confine itself to the area where it was reintroduced. Randy Kelley, Elk Project Leader for the West Virginia Division of Natural Resources said that’s pretty much the case year round.

“As Kentucky’s herd has shown the eastern elk just don’t migrate. We have some juvenile bulls that will roam, but for the most part they usually come back,” he explained.

The release pen where the first elk were turned loose in 2016 is in the center of the Tomblin Wildlife Management Area in Logan County. It’s where much of the work has been done to plant more nutritious grasses and create improved habitat for the elk.

“They’ve got a quality supply of food, water, and cover on these reclaimed mines and our management staff is working hard on habitat improvements to keep them around. They have no need to wander,” said Kelley.

But summertime is when cows start to break away for extended periods of time. Calving is an extremely private affair for the elk. The process is way more secluded than what we’ve come to expect with whitetail deer.

“They keep them pretty well hidden for one to two months. It’s not like you see a doe and a fawn and when the fawn drops within two weeks they’re by their side the rest of the summer. The elk tend to hide them a lot longer for whatever reason,” he said.

The well hidden offspring make it tough for Kelley and his team to know with any degree of certainty just how many will be part of the class of 2021 in West Virginia’s herd. But he is confident there are quite a few out there and maybe more than they’ll be able to count.

“It’s a little early to make an accurate assessment. The way they’re spread out we may not have a total count at all. We do monitor the population using cell cameras so we can get live reports daily of elk that may pass. We have seen a few calves and calving is probably over, but they do such a good job of hiding them, we may not have an accurate count until late July or maybe early August,” he explained.

Inability to make an accurate count is actually a good thing. In fact, it is the goal of the program as the numbers of elk in the southern coalfields continue to expand. Kelley admitted the herd is starting to become the “West Virginia Herd” rather than the “LBL Elk” or the “Arizona elk” as they’ve been commonly called over the past five years. More and more of the cows dropping offspring in 2021 were born in West Virginia and were bred by West Virginia bulls.

“We now have three and four year old cows which are capable of reproducing and several mature bulls. It’s getting to the point that it’s ‘our herd’ rather than a released herd,” said Kelley.