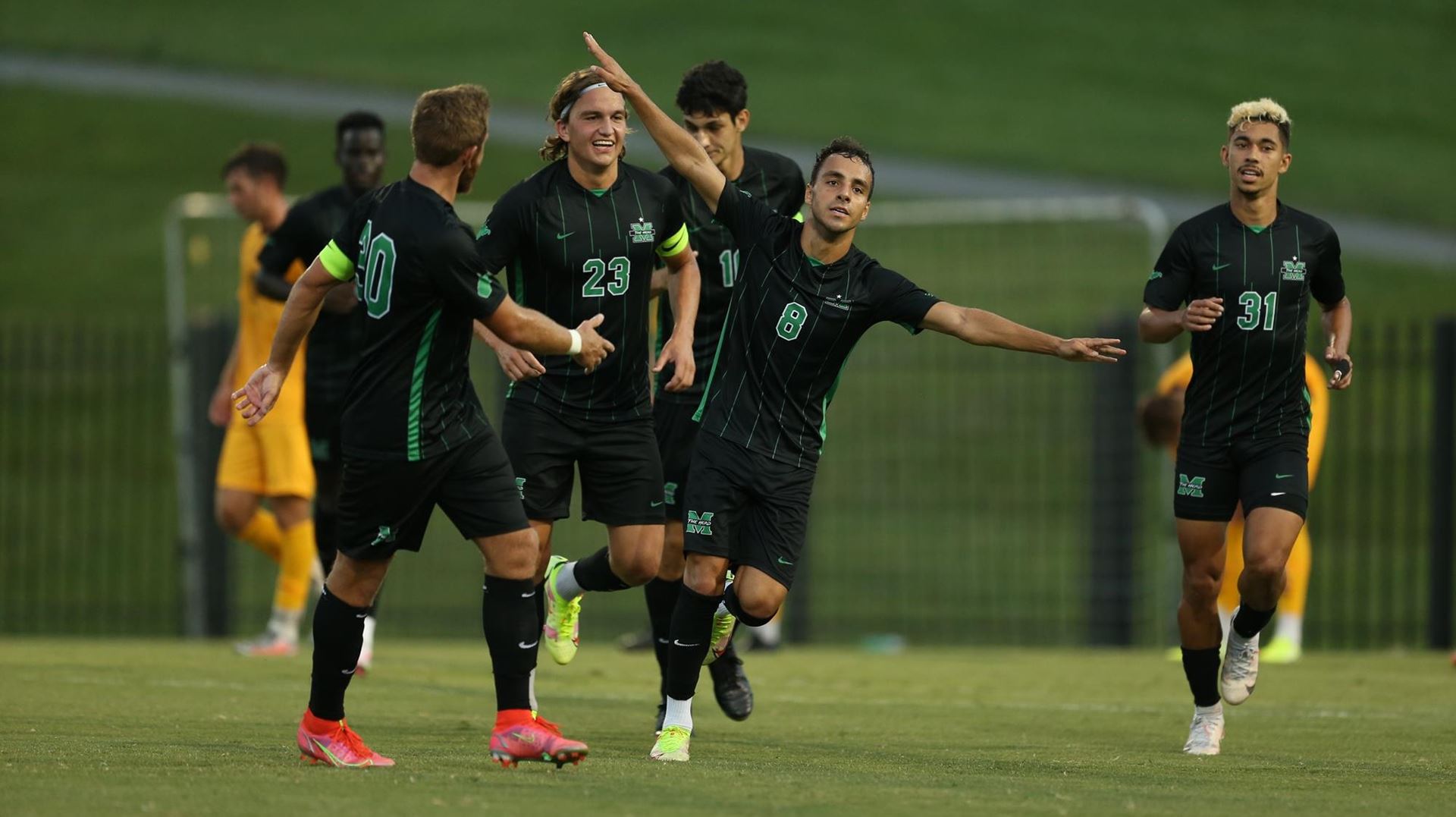 Marshall's Vinicius Fernandes celebrates a goal in a victory at ETSU. Photo by Dakota Hamilton/ETSU Athletics

JOHNSON CITY, Tenn. — Marshall scored three times in the second half to pull away to victory, 4-1, over East Tennessee State on Tuesday night at Summers-Taylor Stadium.

Marshall, preseason favorite to win Conference USA, improves to 2-1-1. The Herd is ranked No. 10 in the latest college coaches poll. The Buccaneers, who came in 2-0, lost their first match. The overall series is now tied 4-4 as the Herd has won three straight .

“Much better performance from us today,” Herd head coach Chris Grassie said in a university release. “Our possession game, especially from the back six payers, was very good. But everyone raised their level today. Unfortunate situation for Ollie (Semmle), as he was unlucky to get the Red. But Gabe Stitler jumped in and did a great job.

“All in all, I thought the lads had a lot of fun tonight. Great to see Ibra (Diop) and Alex (Adjetey) get their first goals for us as well. Now we turn our attention to Bowling Green, who are a very well organized and coached team.”

Marshall led 1-0 at the half on a goal by Vinicius Fernandes at 27:55. Fernandes curled home a ball at the top of the box into the bottom corner. It was his fourth goal of the season. Pedro Dolabella got the assist.

Dolabella scored at 50:44 to make it 2-0. He tucked the ball into the back of the net after a quick restart off a free kick allowed Max Schneider to find his teammate in open space.

East Tennessee cut the deficit to one on a goal by Kieran Richards at 53:46 on a give-and-go with Carlos Portas.

Marshall put a hold on the comeback with the next two goals.

Alexander Adjetey struck at 61:46 and Ibrahima Diop iced it at 70:48. On the Adjetey goal, Jan-Erik Lindros sent a sweeping ball across the face of the goal and Adjetey struck. Diop’s score came on a perfect free kick with his curling effort from 22 yards out.

Marshall took 16 shots (eight on goal) to seven for the Southern Conference member.

Oliver Semmle started in goal for the Herd and made one save. Gabe Sitler entered with 11:10 left when Semmle received a red card and stopped one shot.

On the red card, East Tennessee’s Tarik Pannholzer pickpocketed Semmle, forcing Semmle to stretch a leg and catch the German who was in on goal with no one to beat. The referee had a short conversation with his assistant before issuing the card that ewnded Semmle’s night prematurely.

Herd coach Chris Grassie expressed disagreement, though the Herd played the rest of the way a man down.

The Herd then returns home for four matches, starting with West Virginia on September 17.

The Mountaineers entered the coaches poll this week at No. 5.