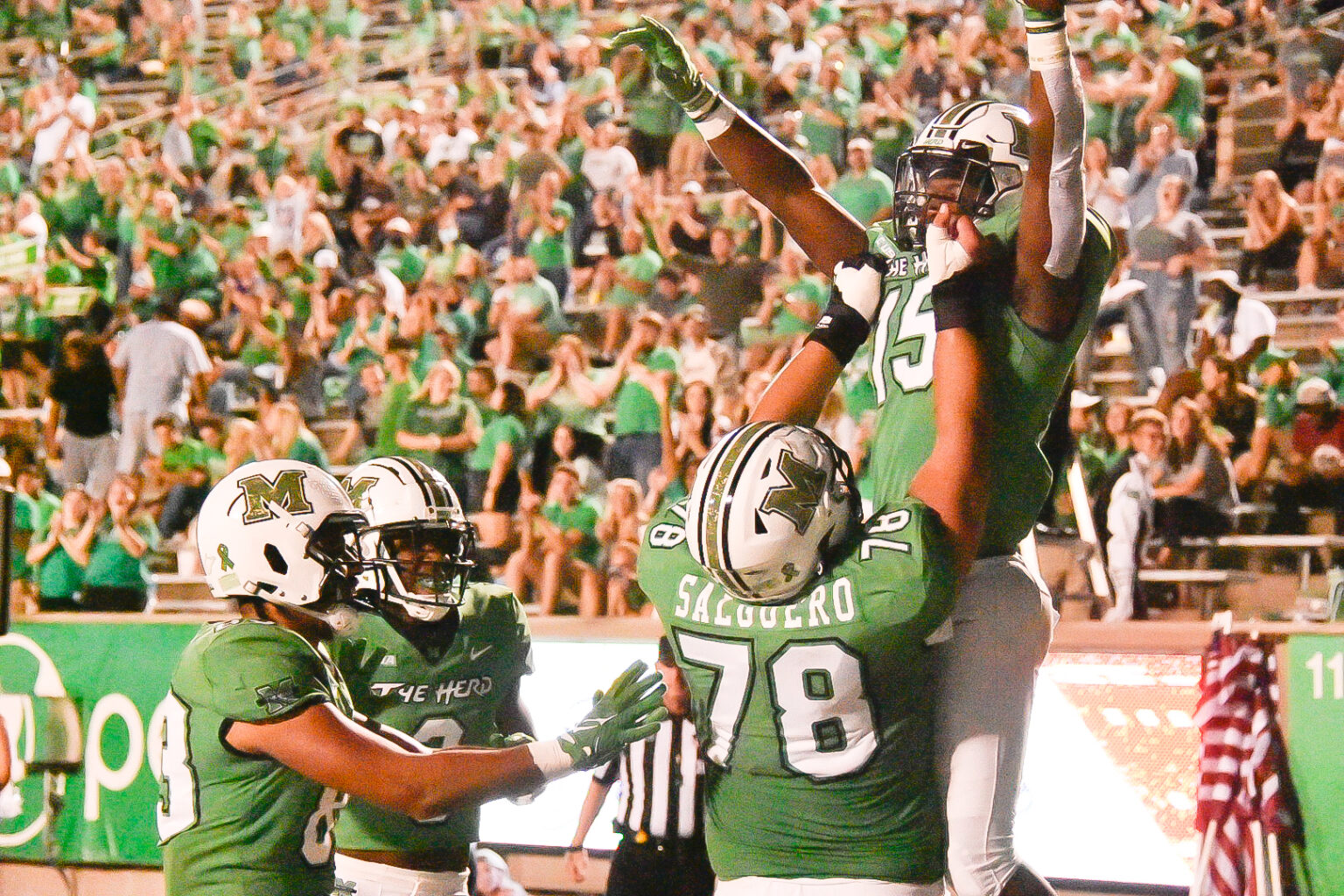 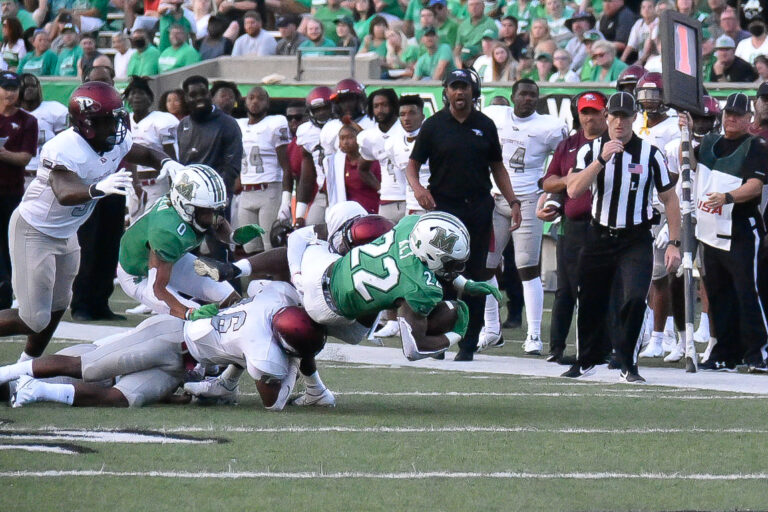 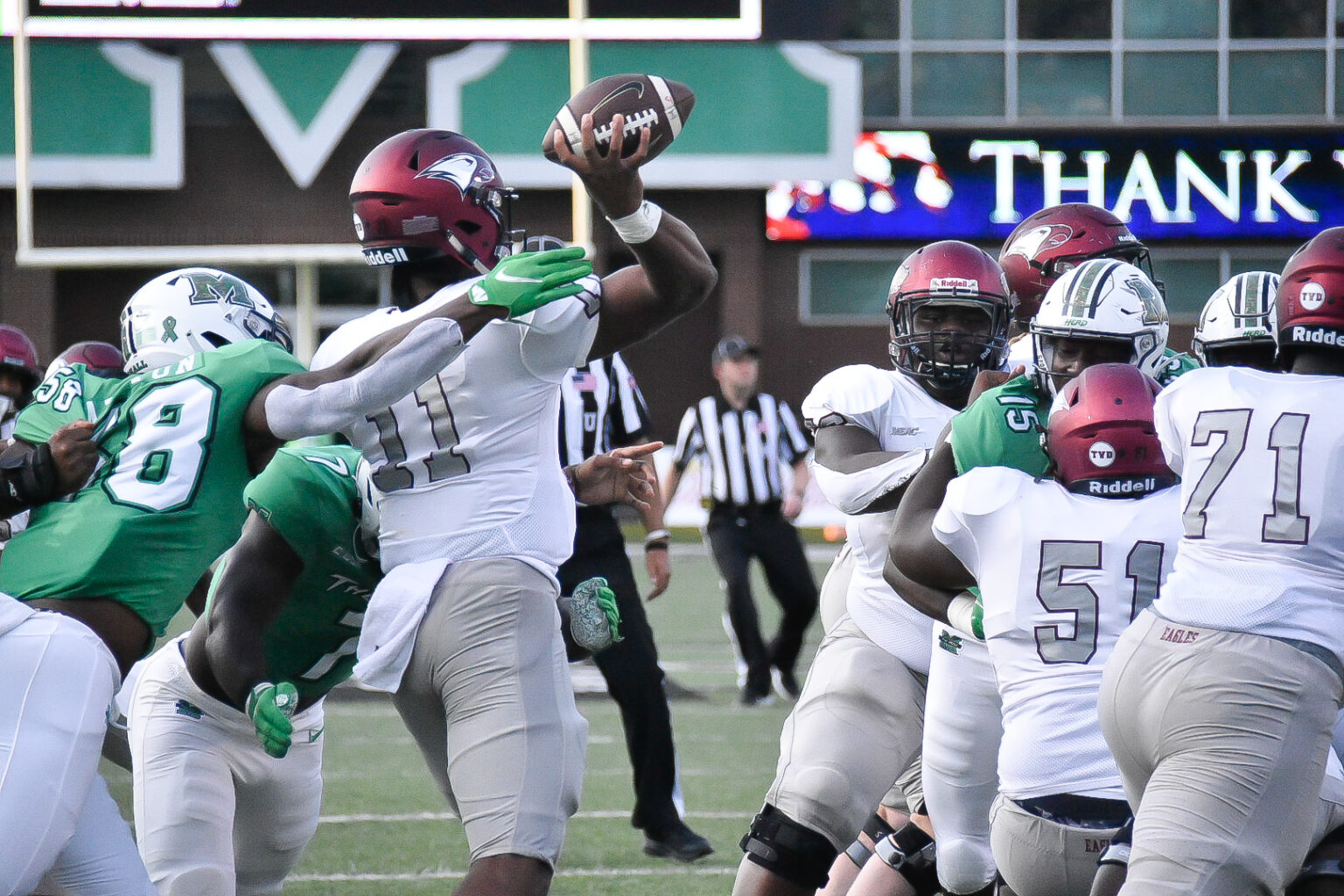 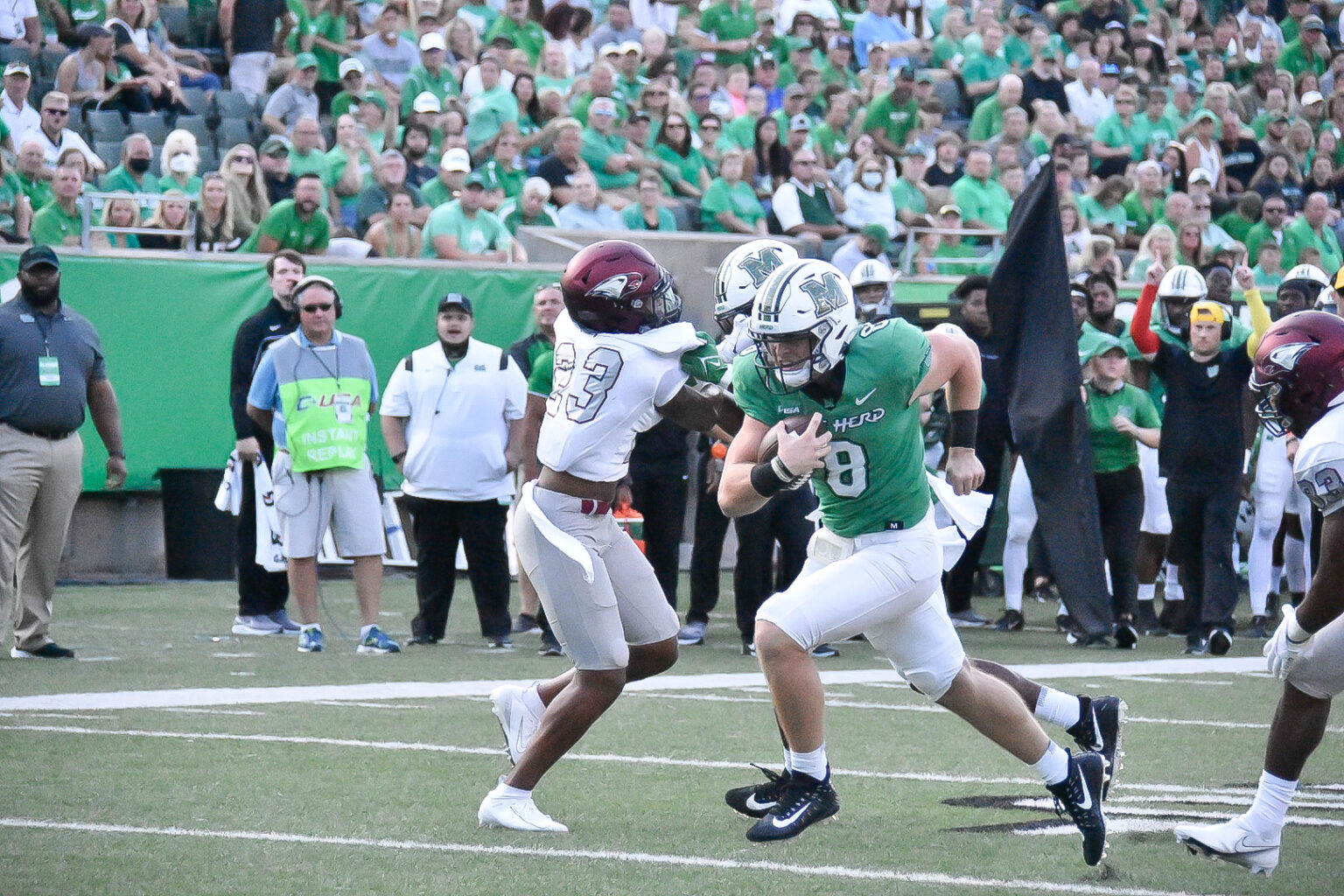 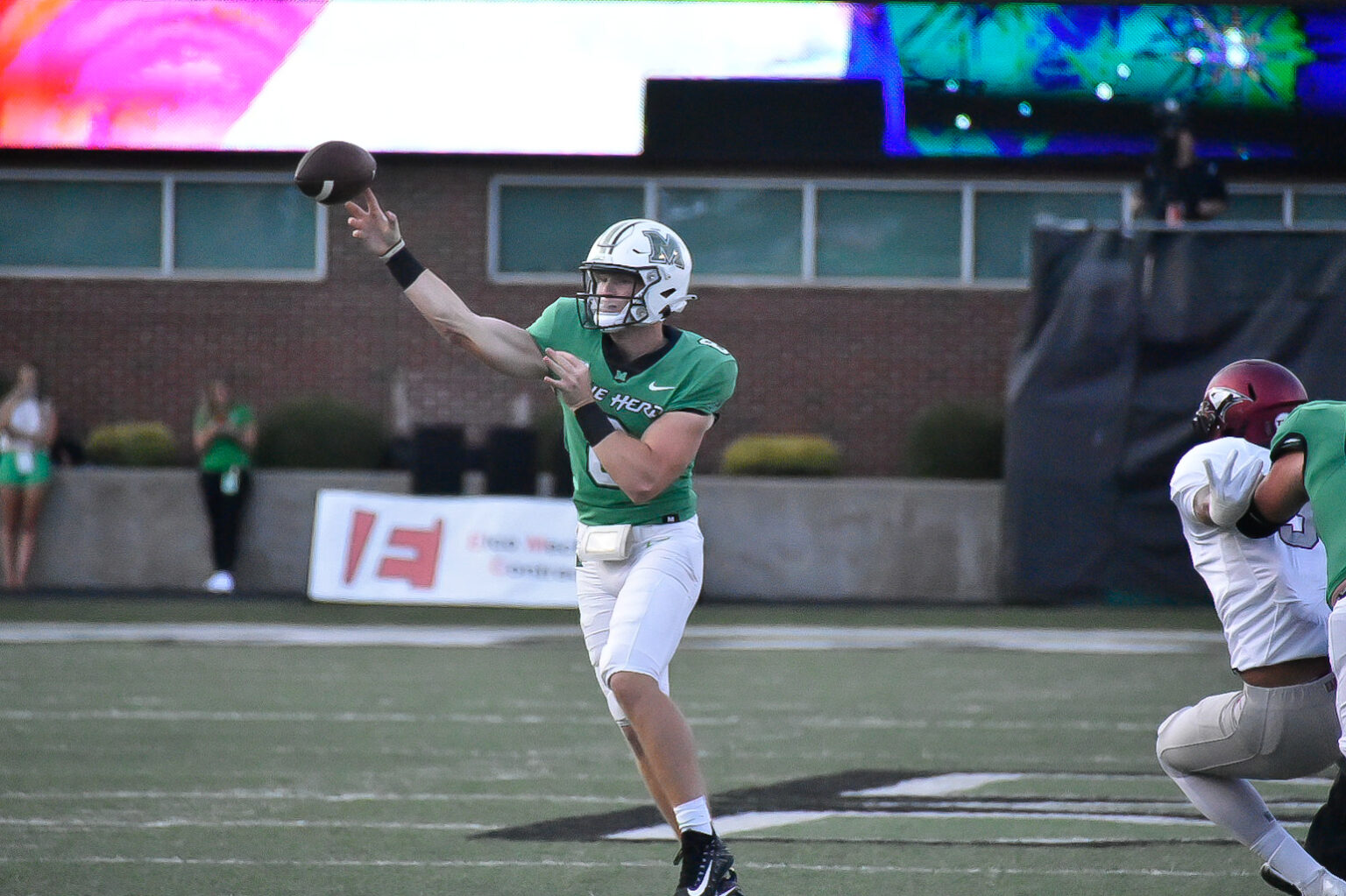 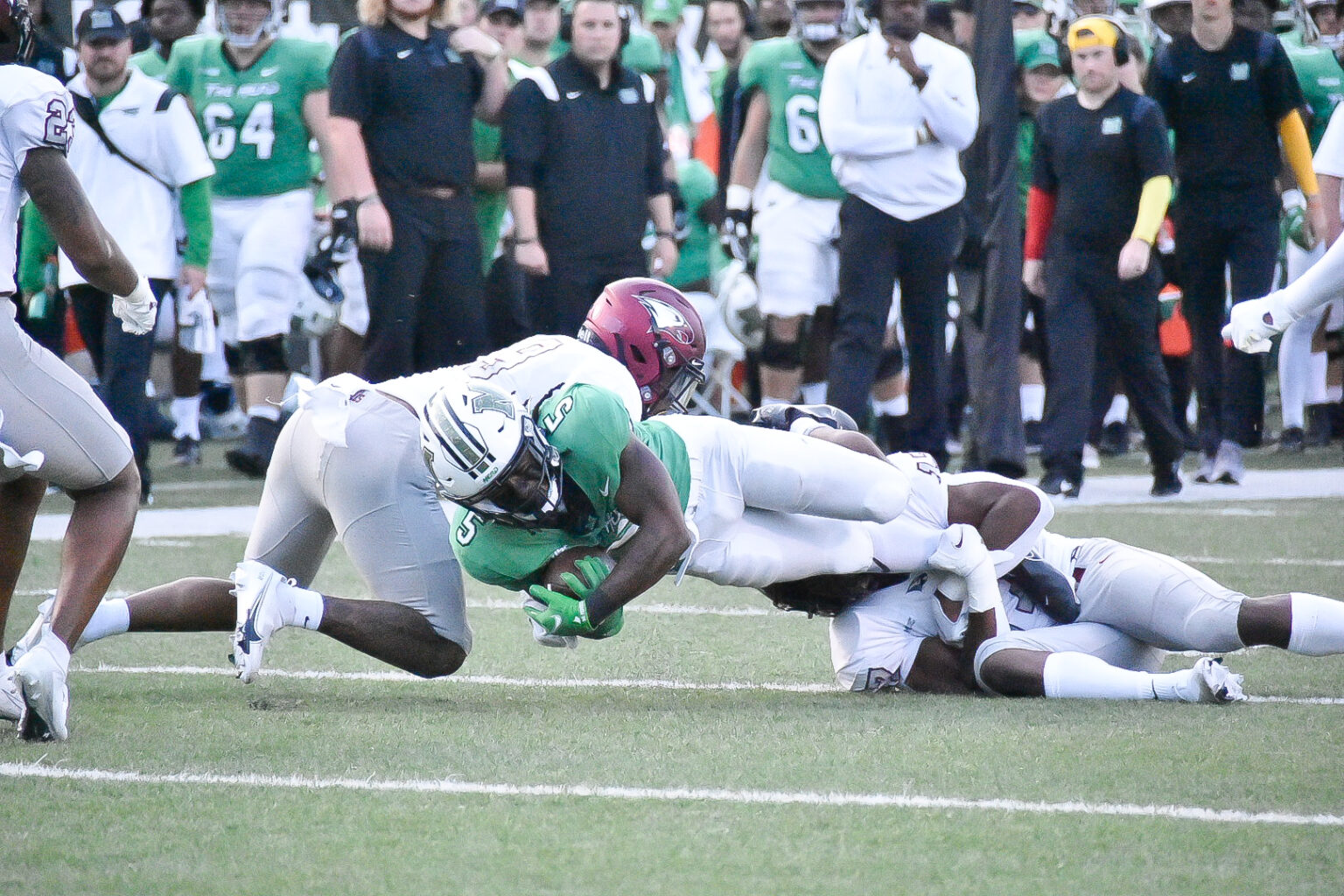 Marshall's Rasheen Ali leaps ahead for a big gain. Photo by Angie Shockley 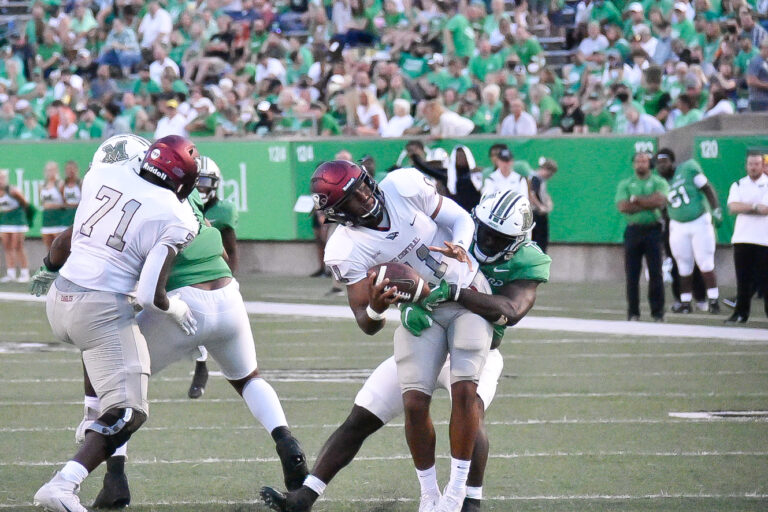 Marshall records a sack in its victory over North Carolina Central. Photo by Angie Shockley

HUNTINGTON, W.Va. — Marshall fans got their first look at the Charles Huff-coached Thundering Herd in the home environment and approved of what they saw.

That’s two blowouts for the Herd under its first-year head coach. Marshall  breezed past Navy, 49-7, last week in Annapolis, Md.

While the fans might get caught up in the final score, Huff, who came to the Herd after two years at Alabama under coach Nick Saban, had a different view.

“I thank the fans, the students, the alumni who came out,” Huff said. “When we came out of the tunnel, the student section was on fire.

“I want to apologize to the fans, the students, the alumni. That’s one of the sloppiest (first) halves of football I’ve ever been involved with. You did your part. I did not do mine.”

Quarterback Grant Wells once again directed a potent and play-fast Herd offense and the defense came up big as well as the visitor’s lone TD came after a muffed punt by Marshall (2-0) led to a short field.

Huff is the type not to get up in numbers such as yards, point total, margin of victory, etc.

“It’s how you play,” Huff said. “Our discipline was way off. I’m excited about the win, but I have higher expectations. We’ve got a lot of things to clean up.”

In the first half, Wells ran for a touchdown and threw three touchdown passes as Herd sprinted to a 30-7 lead. Andrew Sanders booted field goal just before halftime to wrap up scoring.

Marshall’s defense pressured North Carolina Central quarterback Davius Richard and forced a fumble in the backfield to set up Sanders.

Wells finished 34-of-47 for 347 yards with one pick. Counting backups, three Marshall quarterbacks completed 42-of-58 passes for 463 yards. That goes with the final total of 237 rushing.

Top targets were again Talik Keaton and Corey Gammage. Keaton had three catches for 73 yards and two scores, one a 46-yard strike. Gammage snared seven for 70. Running back Rasheen Ali pulled in eight for 47 and a score as Herd backs were targets more in the passing game this week.

Huff turned to backups late in the third period and stayed with them until the end. Backup quarterback Luke Zban led the Herd on a 99-yard scoring drive as the major highlight.

NC Central opened the season August 28 with a 23-14 victory over Alcorn State in the MEAC/SWAC Challenge in Atlanta. Saturday’s game is the first between the Herd and Eagles.

Players from 2001 Herd team were recognized during a first-quarter break. Marshall won the Mid-American Conference East, lost to Toledo in the title game and won the GMAC Bowl over East Carolina in two overtimes. Marshall went 11-2 overall, 8-0 in MAC and had a game against TCU game called due to Sept. 11, 2001 tragedy.

North Carolina Central got penalized five yards for delay of game prior to opening kickoff. That put ball back to 35.

Marshall is home again Saturday against East Carolina, an American Athletic Conference member. Game time is 6:30 p.m. The Pirates are 0-2 after a close home loss Saturday to South Carolina.

Members of the 1970 Young Thundering Herd will have a special weekend celebration with an appearance at the game. This is the 50th year of Marshall football since the tragic plane crash on Nov. 14, 1971. The plane bringing the teams, athletic officials and fans back from a loss earlier in the day at East Carolina crashed short of the runway at Tri-State Airport. All 75 perished.