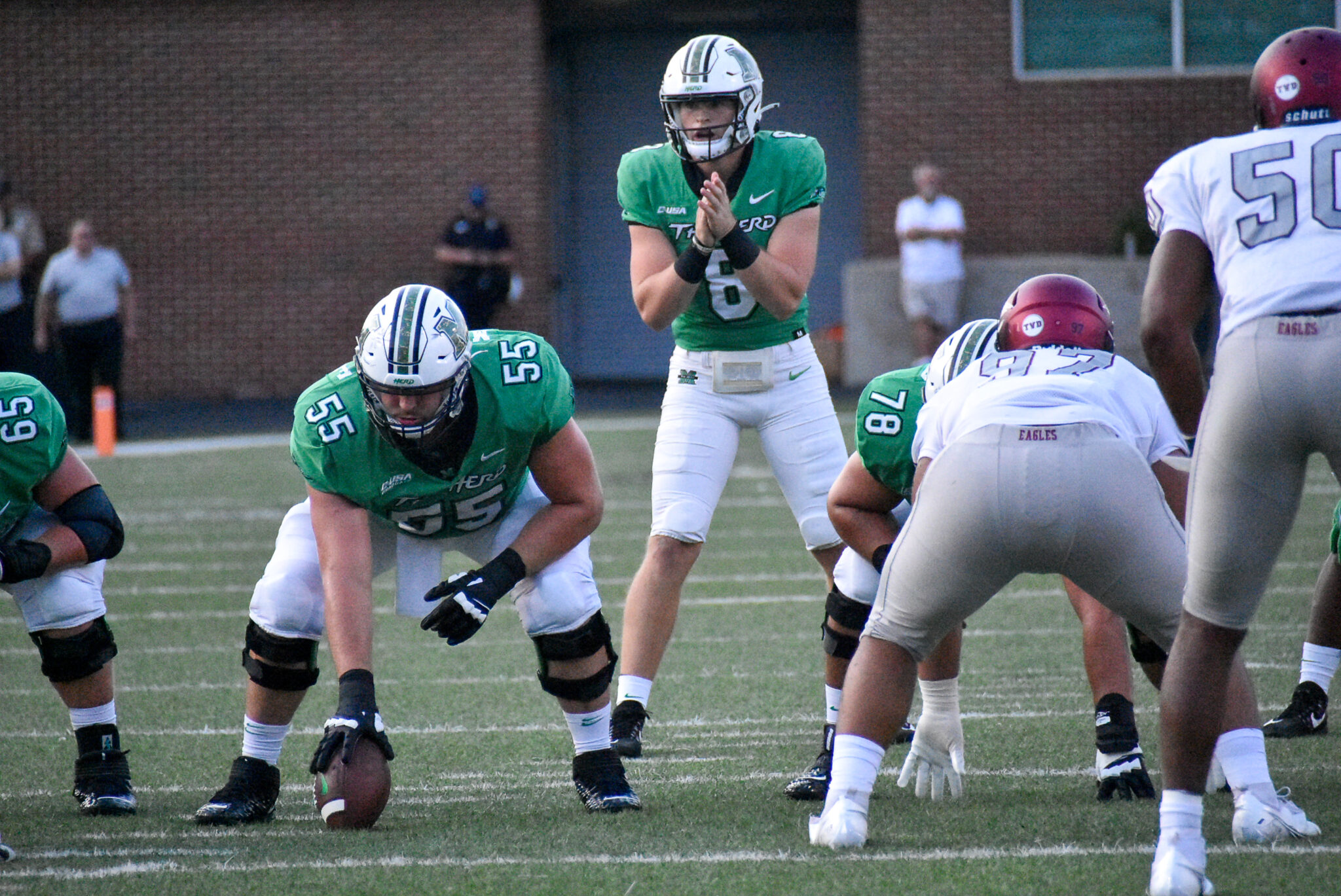 Grant Wells prepares for a snap. Photo by Angie Shockley

HUNTINGTON, W.Va. — After squandering a 17-point fourth-quarter lead last Saturday in a 42-38 loss to East Carolina, Marshall has done some soul-searching.

The loss was the first of the season for the Thundering Herd and now a tougher challenge awaits Thursday in Boone, North Carolina for a nationally-televised matchup with Appalachian State, an old Southern Conference rival.

The game at Kidd Brewer Stadium kicks off at 7:30 p.m. and will be shown on ESPN.

Appalachian State (2-1) won last Saturday at home, beating Elon 44-10. The Mountaineers began the season with a 33-19 win over East Carolina in Charlotte, before suffering a 25-23 loss at Miami.

A year ago, Marshall claimed a 17-7 victory over ASU, holding the Mountaineers scoreless over the final three quarters. The matchup came about only one month before it was played as a result of scheduling changes due to the pandemic.

Appalachian State is led by Charleston native Shawn Clark in his second season as head coach at his alma mater. Clark has a 12-4 career mark after replacing Eli Drinkwitz at the end of the 2019 season when Drinkwitz became head coach at Missouri.

While the Thundering Herd are led by first-year head coach Charles Huff, Clark doesn’t believe that hasn’t presented problems in his preparation for Thursday’s matchup.

“They still have coach Tim Cramsey running the offense and things haven’t changed that much on that end,” Clark said. “My biggest concerns based on last year’s game are to get rid of the turnovers we suffered in Huntington and execute better.”

Huff and his staff began preparing for the Mountaineers immediately after the ECU loss, staying overnight on Saturday in the Shewey Building to begin game-planning.

Costly turnovers and a lack of focus in the fourth quarter cost the Herd a 3-0 start in the setback to the Pirates.

“We’ve just got to finish,” Huff said. “We’ve got to be able to execute in the arena. Good player vs. good player, we’ve got to make a play. We didn’t make enough of them.”

The game will be a showdown of offensive contrasts. Marshall will pit its fast-paced attack featuring quarterback Grant Wells and wide receivers Talik Keaton and Corey Gammage (eight catches for 182 yards against ECU).

The Herd has also shown it can run the ball, and Rasheen Ali carried 24 times for 189 yards and three touchdowns against ECU. Ali has 293 rushing yards on 6.4 yards per attempt and leads the FBS with seven TDs on the ground.

“We’ve got to figure out a way to execute consistently,” Huff said.

The Mountaineers and Thundering Herd have played 23 times, with ASU holding a 14-9 series lead.

Thursday’s visit to Boone will be Marshall’s first in 25 years. The 1996 matchup at Appalachian State was Marshall’s final season in the Southern Conference and FCS football. Marshall won 24-10 with a team led by quarterback Chad Pennington and wide receiver Randy Moss.

Marshall and App State are also scheduled to play September 17, 2022 in Huntington and September 8, 2029 in Boone … Former WVU cornerback David Lockwood coaches the App State safeties. Lockwood was part of a 1988 WVU squad that lost to Notre Dame for the national championship in the Fiesta Bowl. Lockwood played in three bowl games at West Virginia and was a member of the WVU coaching staff three separate times (1989, 2000 and 2008-2011).