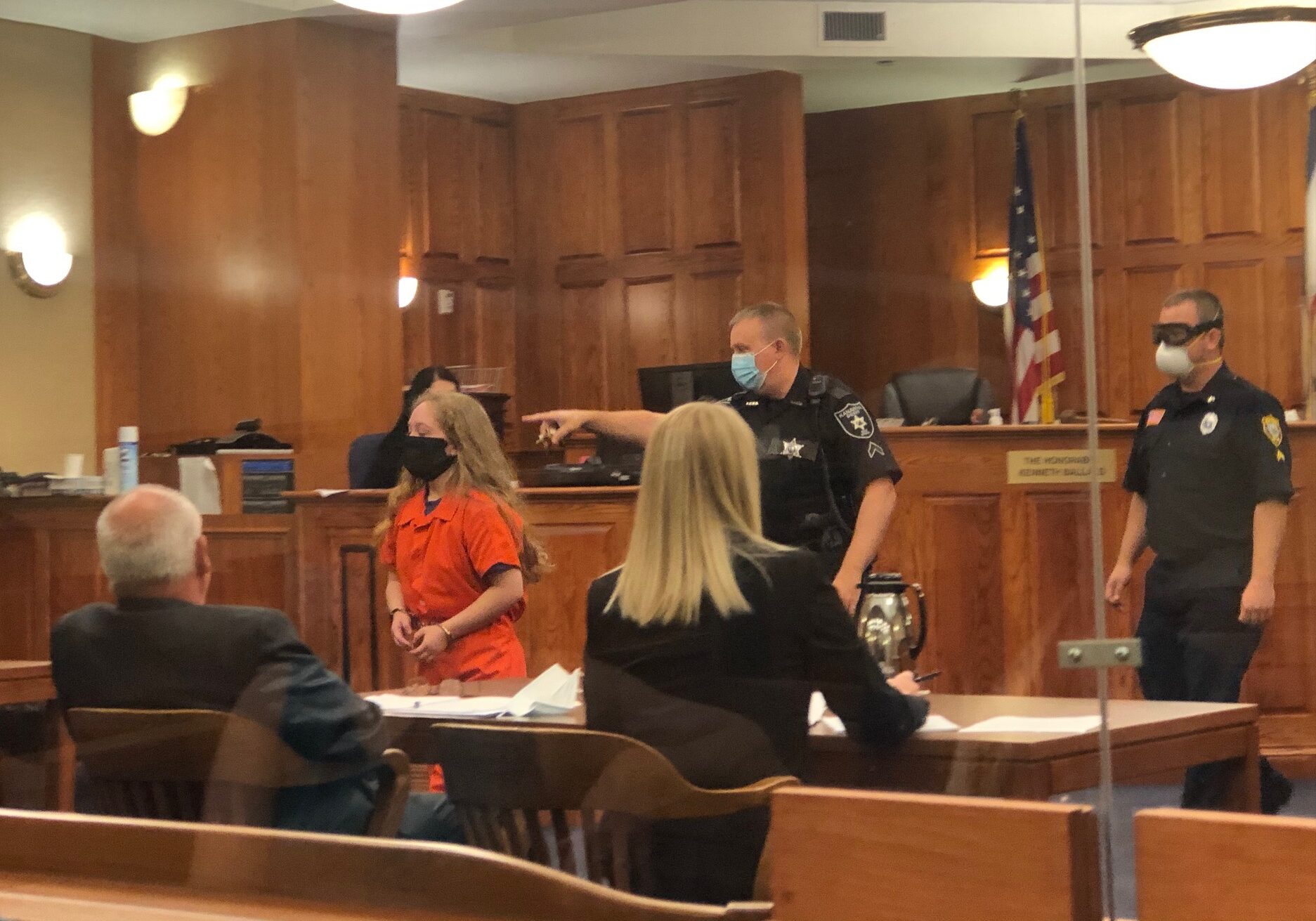 Rebecca Walker, 17, walks into the courtroom on Thursday.

CHARLESTON, W.Va. — A teenage girl has been sentenced to 10 years in prison for her role in the deaths of an Elkview family in December of last year.

Kanawha County Circuit Court Judge Kenneth Ballard sentenced Rebecca Walker, 17, Thursday morning in an in-person sentencing. In July, she had pleaded guilty to 4 counts of accessory after the fact to first-degree murder. Ballard sentenced each count, 2 and 1/2 years, to run consecutively.

“Honestly I do not have the words. I don’t think anyone has the words to try to explain or give comfort to the families here today (Thursday),” Ballard said before sentencing Walker.

The charges stem from the murders of Daniel Dale Long, 37, Risa Mae Saunders, 39, Gage Ripley, 12, and Jameson Long, 3, all of Elkview. Investigators said they all died of gunshot wounds.

A family member discovered the bodies at a Cemetery Hill Drive residence in Kanawha County on Dec. 13, 2020. The family member, Timothy Saunders, father of Risa Saunders and grandfather of the boys killed, had tried to get in touch with the family a day before the discovery and found the front door of the home unlocked.

Saunders gave a victim’s impact statement to the courtroom while holding photos of those killed.

“When I close my eyes and I try to sleep now, all I see is the nightmare I walked into. Gage laying on the floor, looking up at me, ice-cold and blue. Risa and Dan still in bed, ice-cold and blue. Couldn’t get anybody to wake up, blood everywhere,” Saunders said.

A 16-year-old boy who was previously charged with the murders as a juvenile is awaiting a transfer to adult status. His identity has not been officially released but Walker was identified as his girlfriend. He is referred to as “G.S.” in court documents.

Saunders claimed that Walker knew of the boy’s plan to murder his family. He said it could have all been prevented.

“She knew about it, as I was told, a month before it happened. One phone call could have prevented a senseless act. She could have told anyone or notified the police of Gavin’s plan,” Saunders said emotionally, identifying the teenager as Gavin.

Instead, Saunders now says all he was left is memories of his daughter and her children. He said Walker’s actions and the teenage boy have made him an empty and hopeless man.

“She was 39-years old,” Saunders said of his late daughter. “She was daddy’s girl and she always will be. Her boys were her life. She always made sure they had anything they wanted or needed.”

Robbie Long, the attorney for Walker, stated it was difficult to quantify her responsibility in this case. He said she had no criminal record, no juvenile record and her school officials have positive sentiments towards her.

Long said she has had a tough life as a teenager, losing all of her belongings in the Elkview flooding of 2016. According to Long, Walker then lost her mother and she was close to her.

Long called Walker meeting her boyfriend ‘a perfect storm’ for something to happen. According to Long, Walker was told by the boy that he was being abused at home.

“She wanted desperately to help him. She also told the doctors she did not know how to help him. And that is where I think this story took a tragic turn,” Long said.

“The two of them became delusional about their futures together. Unfortunately, her boyfriend acted on that delusion.”

“When you look at the conduct of both the individuals involved, it’s more of selfishness instead of delusion. It’s wanting to spend time together at the expense of four lives,” Morris said.

Morris said the state believed the defendant was manipulated to an extent and that is why there was a plea agreement.

Court documents stated that Walker knowingly, unlawfully and feloniously harbored, concealed, and assisted the teenage boy in the committing the murders. Documents further stated that the crimes took place between Dec. 9 and Dec. 13.

Morris said Walker will go to a juvenile facility and return to the courtroom when she turns 18.

Walker was overwhelmed with emotion while trying to read a statement to the court on Thursday. Her letter was read by Judge Ballard silently.